The vintage revolver-mounted Billy Club. Yes, it was real (VIDEO)

An oddball gun on display at the Great American Outdoor Show in Harrisburg this month has a weird background but once upon a time, someone thought it was a great idea.

Labeled the “Combination policeman’s truncheon and extension pistol-barrel,” by its WWI-era inventor, Edward Norton Moor of Oakland, California, the device is a hollowed-out impact weapon capable of coupling to the end of a revolver while still allowing the handgun to fire.

Not intended as a suppressor — an iffy prospect for most revolvers — Moor’s 1916 patent application for the device says plainly that, “The object of the invention is to provide an improved form of a policeman’s truncheon which will serve as a barrel extension of a pistol.” 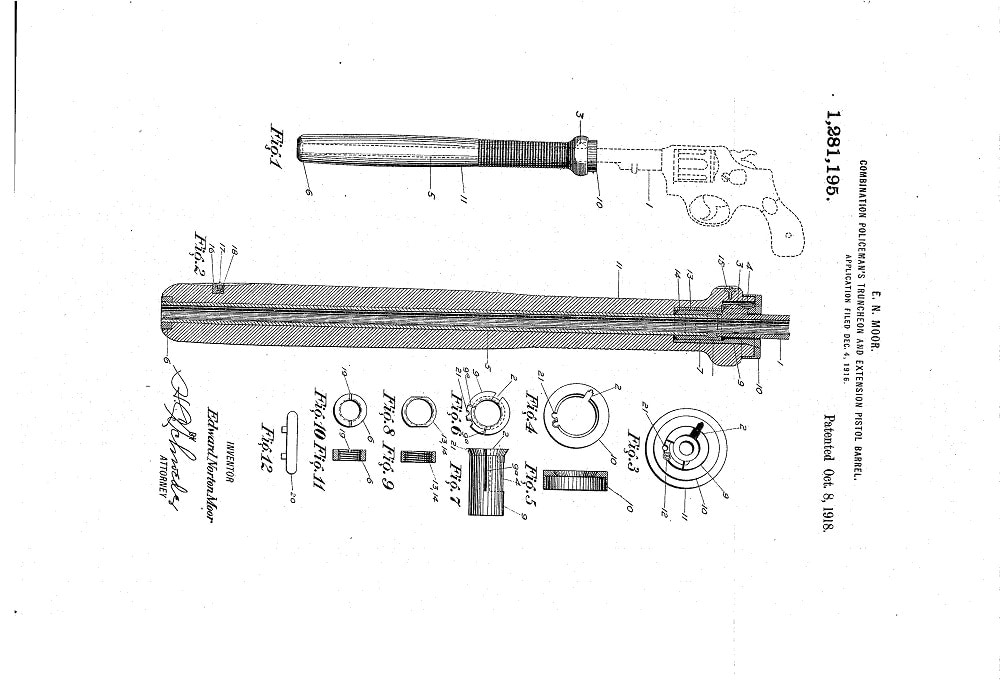 Moor also registered patents on a number of other barrel extensions in the U.S. and France, as well as a fishing pole. (Photo: Google Patents)

We can’t find a reliable source for just how many of Moor’s devices were made, but, as explained in the above video by the National Firearms Museum, at least a few examples were produced by the Automatic Screw Company in California, with a 1919 patent date.

Shown on a vintage Smith & Wesson Model 10 revolver at Wanenmacher’s Tulsa Arms Show in 2012, the gun is now mounted to a more correct Colt Army Special .32-20 revolver and will be among the guns shown off at the Great American this month. Located at the Pennsylvania Farm Show Complex, the event runs nine-days, from Feb. 2 to 10.

Great American Outdoor Show #GOTD – Colt Army Special .32-20 Revolver. Come by Harrisburg, PA and check out the all-new NRA Museum travelling exhibition. We have a special selection of great guns and each day this upcoming week, we'll post highlights of pieces in the exhibit. pic.twitter.com/7Prx29LQqL