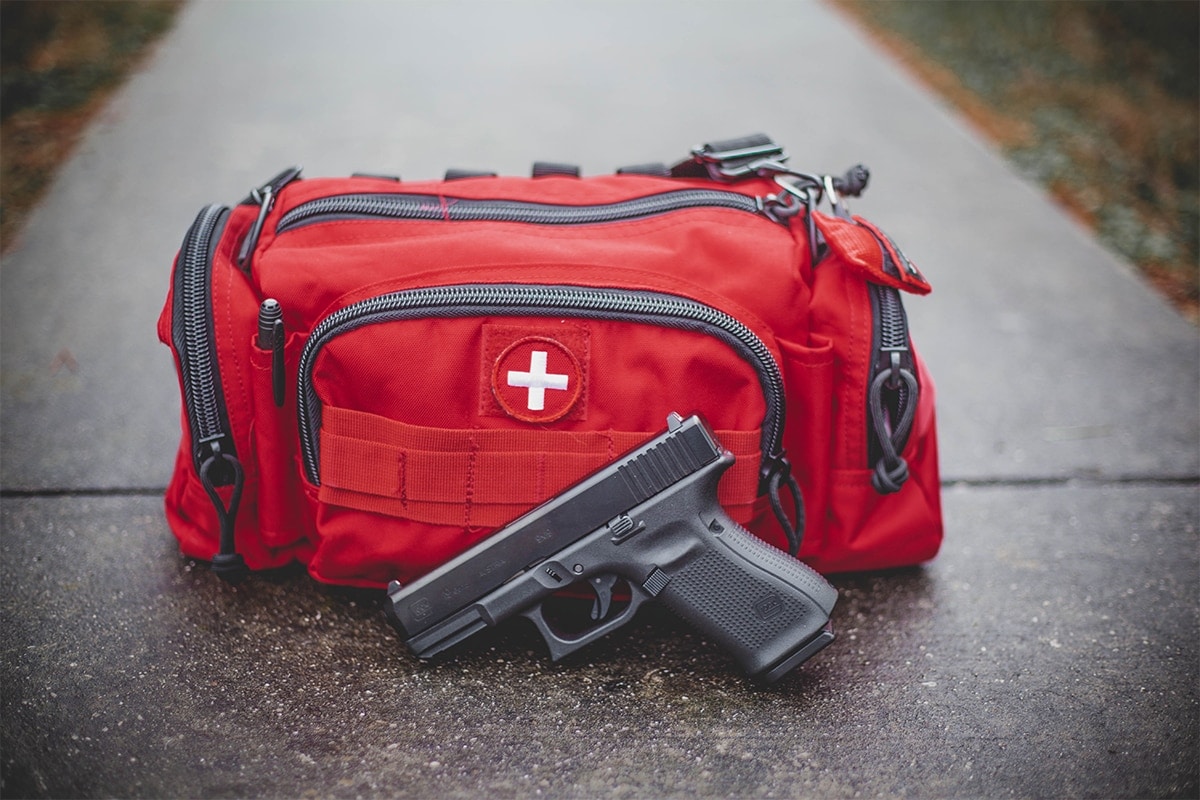 Blood oozes out of the open wound, trailing down his hand and dripping onto the floor. He holds his hand up in the air and follows me to my shooting stall. I quickly reach for the 5.11 Tactical backpack that serves as my range bag, unzipping the front most pocket, revealing a bright red, hard case with a cross emblem emblazoned on the front – my first aid kit. Opening the case, I retrieve a bandage and quickly apply it to the wound, attempting to stop the bleeding. It’s a minor injury, a slide bite courtesy of a Springfield XD. My patient will live with a fresh band-aid applied to the web of his hand and a lesson on awareness when it comes to gun grip.

The ability to treat this minor yet annoying consequence of shooting comes courtesy of my own first aid training, an endeavor I am not only passionate about but for which I advocate. As a Basic Life Support Instructor, I impart my knowledge of CPR and First Aid for the American Heart Association to just about any one, gun owners included, who will listen; however, gun owners don’t always seem to grasp the importance of first aid training or the role it plays in gun ownership.

Dr. Joe Alton alongside his wife Amy Alton, ARNP, know a thing or two about the importance of medical training and how quickly a normal day can turn into tragedy. Just 10 minutes from them on February 14, 2018, a gunman stormed Marjory Stoneman Douglas High School in Parkland, Florida killing 17. The events sent the nation reeling and reinforced for the Altons why they advocate so strongly for first aid training. Appearing at SHOT Show showcasing first aid books and gear with their medically focused Doom and Bloom LLC, the Altons said that medical training is relevant for every civilian.

“No one is immune to the possibility of something bad happening,” Dr. Alton told Guns.com. “It just makes common sense to have some ability to deal with the injuries that might happen in times of trouble.”

A well-stocked first aid kit and the knowledge of how to use it prove vital in injury situations. (Photo: Jacki Billings/Guns.com)

Despite ample training opportunities available through various organizations in the U.S., many gun owners simply aren’t qualified to handle even the most basic first aid needs. From injuries accrued due to slide bite or jagged metal gun parts to the most serious in the form of gunshot wounds, Dr. Alton emphasized the need for gun owners to move past normalcy bias, realize that the potential dangers they face each and every day and ready themselves by taking part in medical training.

“We go through our lives, assuming that things are going to occur a certain way. You wake up, grab a cup of coffee, go to work, come home. You assume nothing unusual is going to happen because nothing unusual usually does. The problem is when an event occurs that is not normal you are unprepared,” Dr. Alton explained. “Matter of fact, you are so unprepared you are paralyzed. You don’t know what to do. In some circumstances it could be just a very, very short time before a person that is injured — you or someone you love — is beyond medical help. You need to know what to do.”

Dr. Ron Bellamy produced a landmark study in the mid-1980s focused on combat deaths of soldiers. In his research centered around Vietnam soldiers, Bellamy proclaimed that bleeding is the primary cause of death but also the most preventable. Since his research was published, other researchers have tackled the topic of bleeding out and ascertained that the most important factor in dealing with an injury pre-hospital, civilian or military, is buying time. 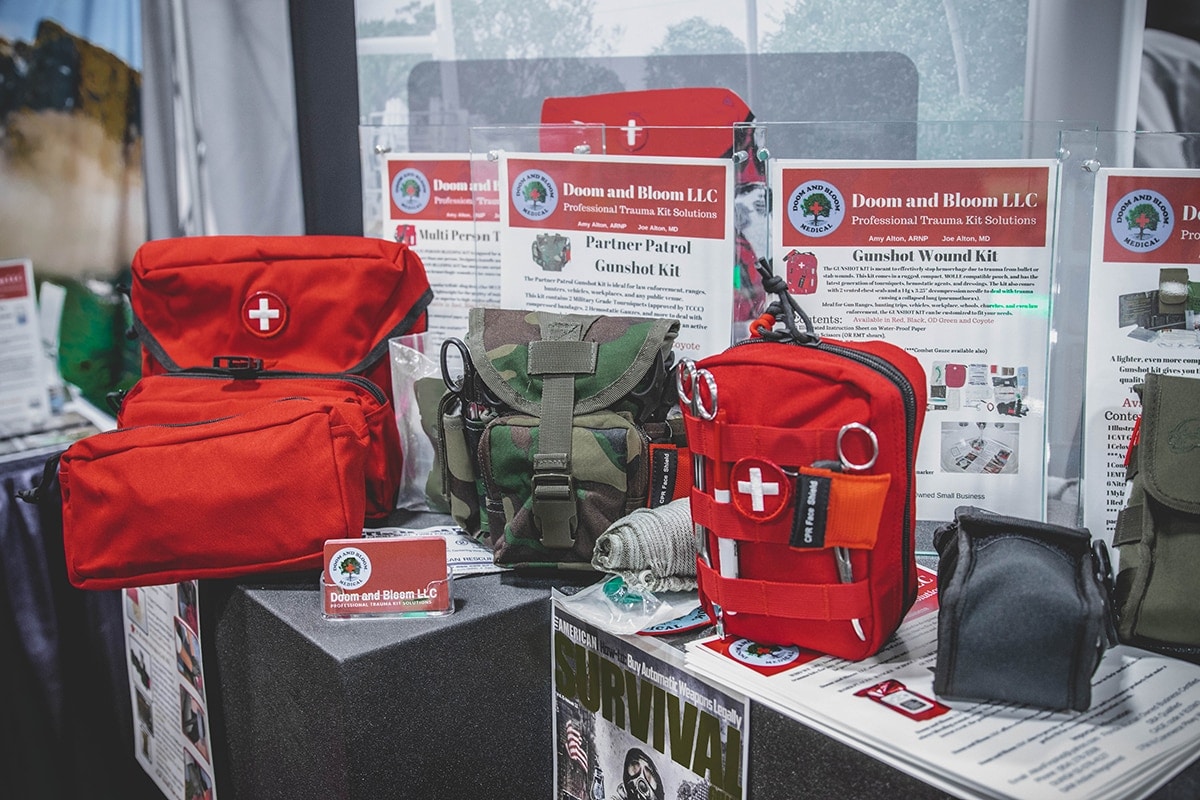 McCall works for North American Rescue, one of the most recognizable names in the medical gear and training community. Boasting a bevy of products for all skill levels, the company has brought innovative products to gun owners such as stop the bleed kits and personal IFAKs for concealed carry and range bags.

“Any time you’re carrying something that puts holes in things you need to be able to fix those holes that you’re putting in things— whether or not you intended to or not. Accidents happen,” McCall said. “Important to have everyday equipment like tourniquets, bandages and dressings — basic equipment you need to save a life.” 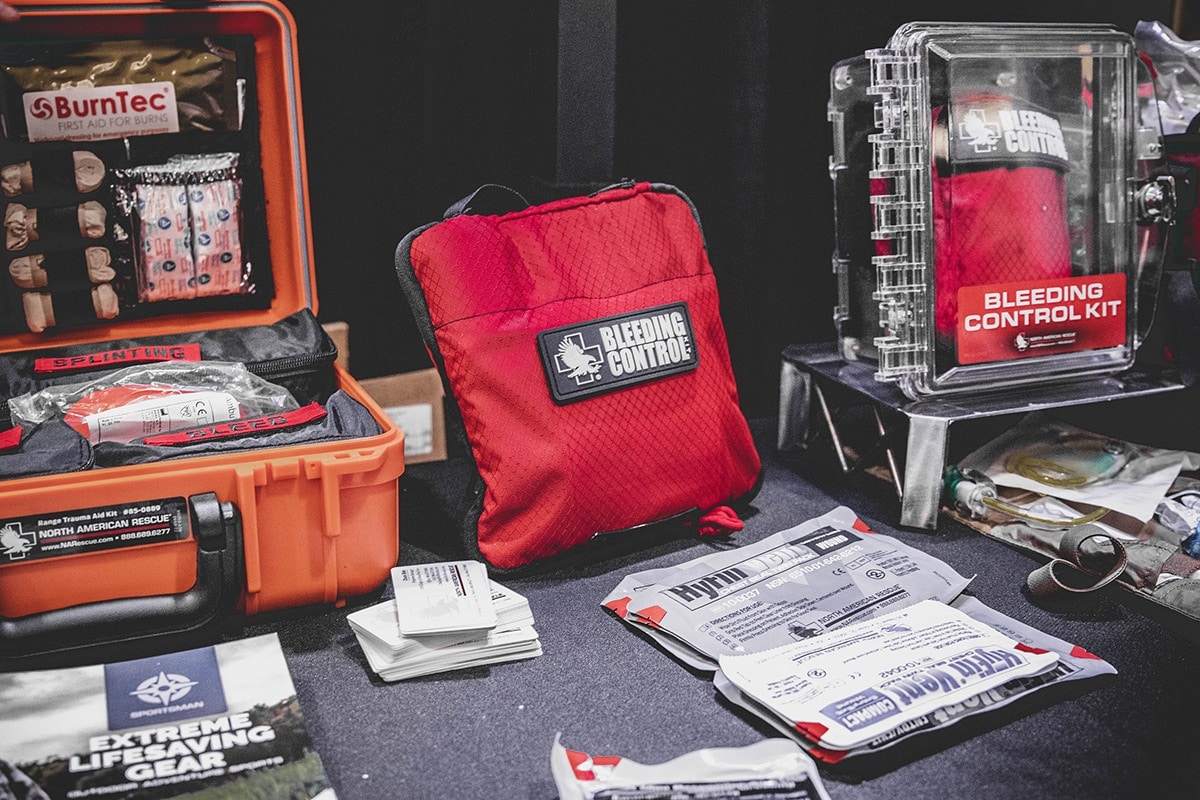 The blasé attitude and the willingness to pour time, money and energy into gun classes while completely ignoring the need for medical training is a sign of the times according to one instructor. The fast-paced glitz and glamour of gun training eclipse the practical nature of first aid related tasks.

“Applying a tourniquet isn’t as sexy as a sub-second appendix draw and shot on steel. We live in a society where instant gratification and likes on social media drive a lot of priorities for people,” Shawn Herrin said.

Herrin is best known for his affable personality, hosting weekly podcasts We Like Shooting, This Week in Guns and the Gun Funny Podcast on the Firearms Radio Network. The more serious side of Herrin is deeply rooted in the medical and firearms training community, though. Traveling the U.S. teaching everyday civilians the basics of medical and first aid training through his civilian medical course, Herrin is a major advocate for having first aid gear and knowing how to use it properly. A firearms instructor with Tactical Combat Casualty Care course certification, Herrin says that gun owners most often lack the serious training to deal with benign events, let alone catastrophic medical issues. 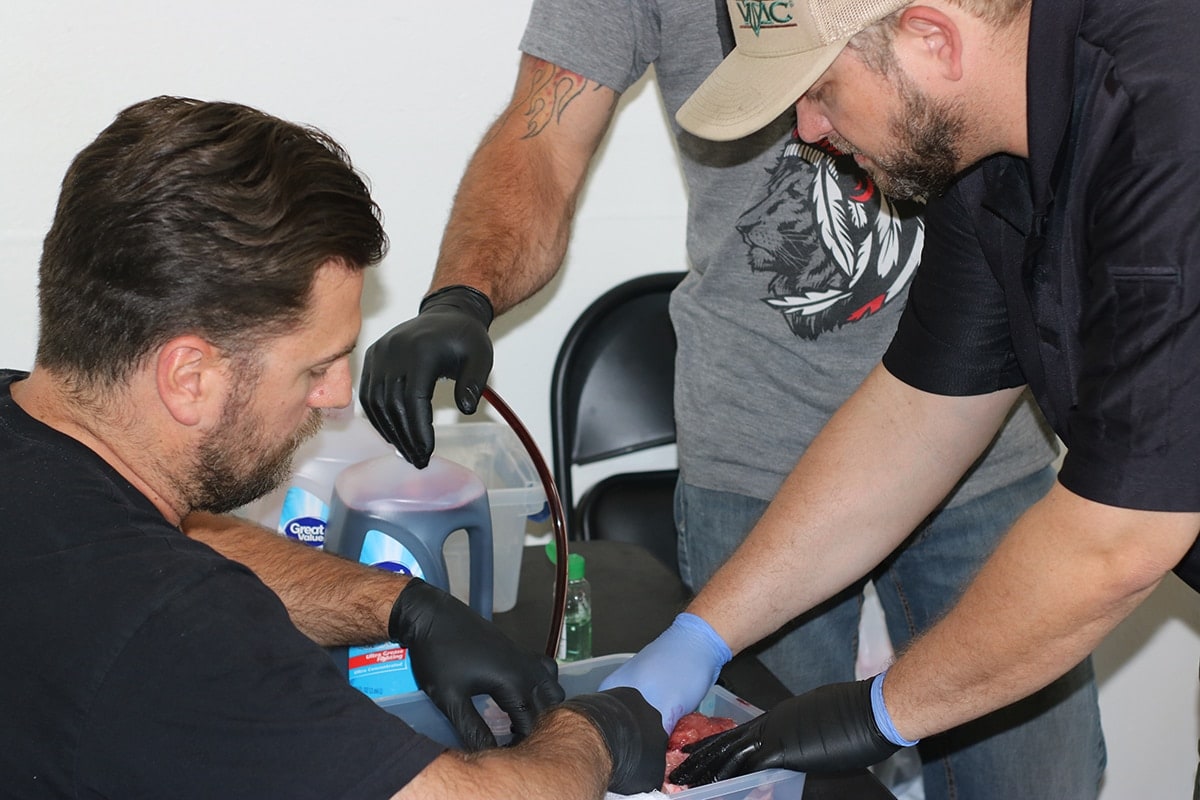 Shawn Herrin shows students the fundamentals of bleeding control during his Civilian Medical course. (Photo: We Like Shooting)

“Gun people go to the range, we practice, we train, we shoot drills, we take classes. Some of it’s for fun and some of it’s for something more serious,” Herrin elaborated. “Fortunately, it’s unlikely most of us will take a gun from its resting place and point it at another human being. The more likely scenario is that we’ll be presented with a situation that either us or someone else is injured and action has to be taken before first responders get there.”

Gun owners and concealed carriers, in particular, are willing to take on the risks of a gunfight to protect themselves and the ones they love. Herrin said it seems logical that if gun supporters are prepared to attend classes that ready them for a time in which they must fight for their lives, attendance in classes that also ready them for when the gunfight is over is also a must.

“If our goal is to be prepared should someone try to harm us or our loved ones, what happens when the smoke clears and the blood is on the ground? What happens if we eliminate the threat, but take fire ourselves? Medical should be at least half of your training. It really may save your life.”