When one company announces more than 50 new products — we lost count after that — your ears best be perked up. Vista Outdoor encompasses some major brands: Savage, Stevens, Fox, Federal, RCBS, CCI, Camp Chef, Primos, Weaver, and Bushnell, among many others. They pulled no punches with the new products in 2019, and they’re not just fluff, but some potentially industry-leading launches here.  A number of our favorites are below, but these are only a few of the newbies, so be sure to swing by Vista’s page for details on all the latest and greatest. 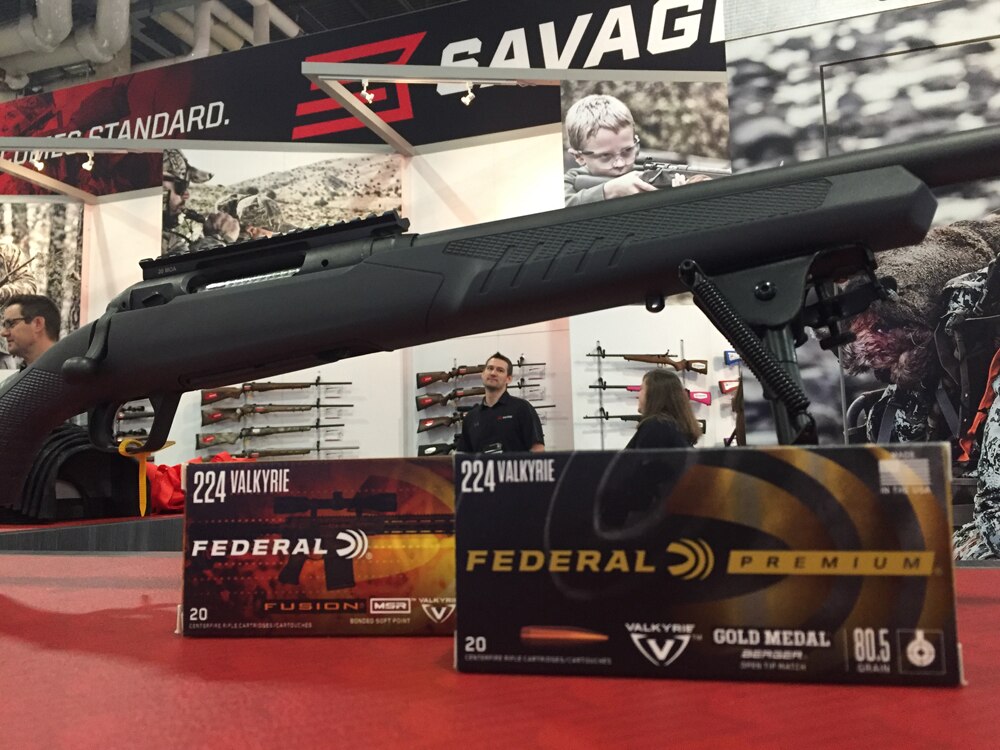 We all knew this was coming. A bolt action rifle in .224 Valkyrie from Savage was expected on the heels of bolt guns in the Vista-born caliber by the likes of Masterpiece Arms and Mossberg. The new Prairie Hunter looks understated with its gray and black synthetic stock, but don’t let looks fool you. Like the High Country, the Prairie Hunter makes use of all things “Accu”—the Accutrigger, AccuStock, and AccuFit system. Furthermore, the threaded 22 inch barrel should be a performer on varmints and predators. MSRP will be $759. 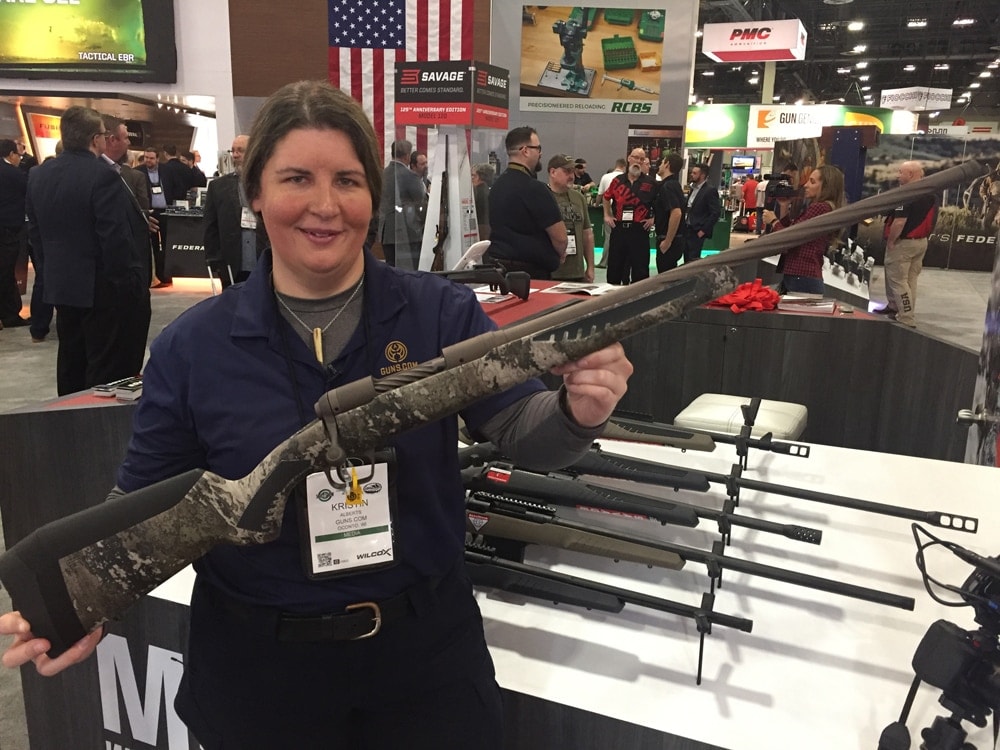 Hands down, one of the best-looking rifles on the show floor is the new 110 High Country. The spiral fluted bolt and barrel, metalwork coated with PVD, and everything “Accu” includes the fully customizable AccuFit system on the True Timber Strata camo stock. Given Savage’s recent track record, we have little doubt the rifle will shoot as good as it looks. When a world-champion professional shooter plans to buy one, you best take a look as well. With 11 calibers on the docket, including 6.5’s in Creedmoor and PRC as well as .280 Ackley Improved, this is an interesting rifle. Keep an eye on Guns.com as we go more in-depth with the High Country soon.  MSRP is set at $1,129. 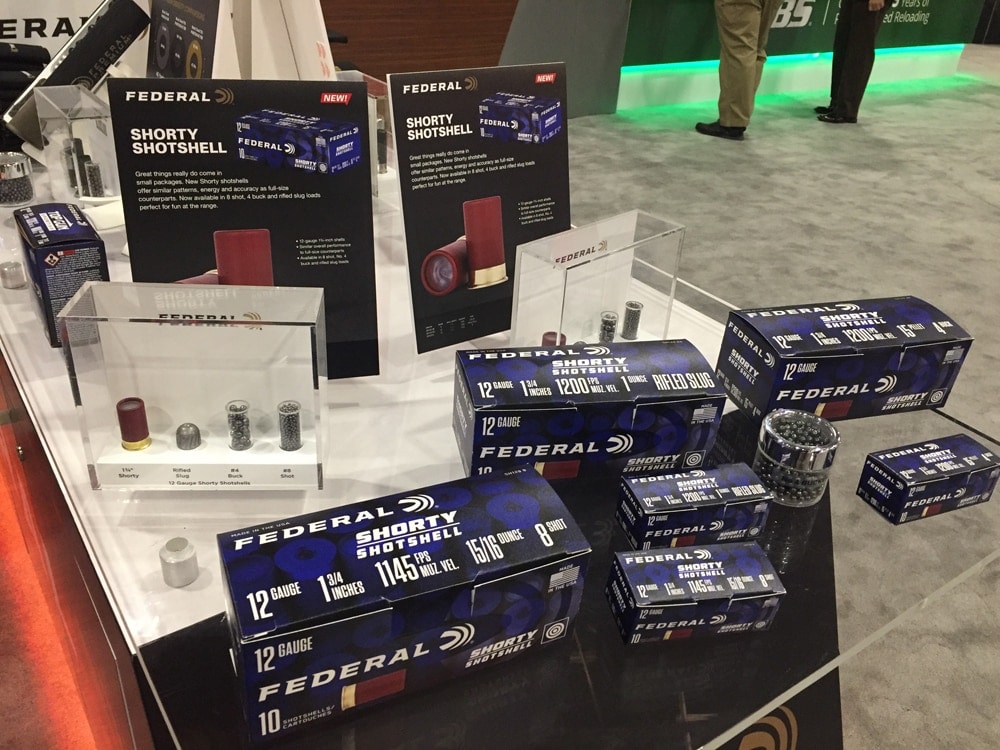 Despite dozens of other new ammunition offerings, none received such overwhelming interest as the Shorty Shotshells. Although they’re only 1-3/4 inch long, Shorty’s are advertised to “offer similar patterns, energy, and accuracy as full-size counterparts.  All I know is we dusted clays with them on the range, in awfully windy conditions. The Shorty will be available in 12-gauge #8 shot, #4 buck, and a rifled slug as well. 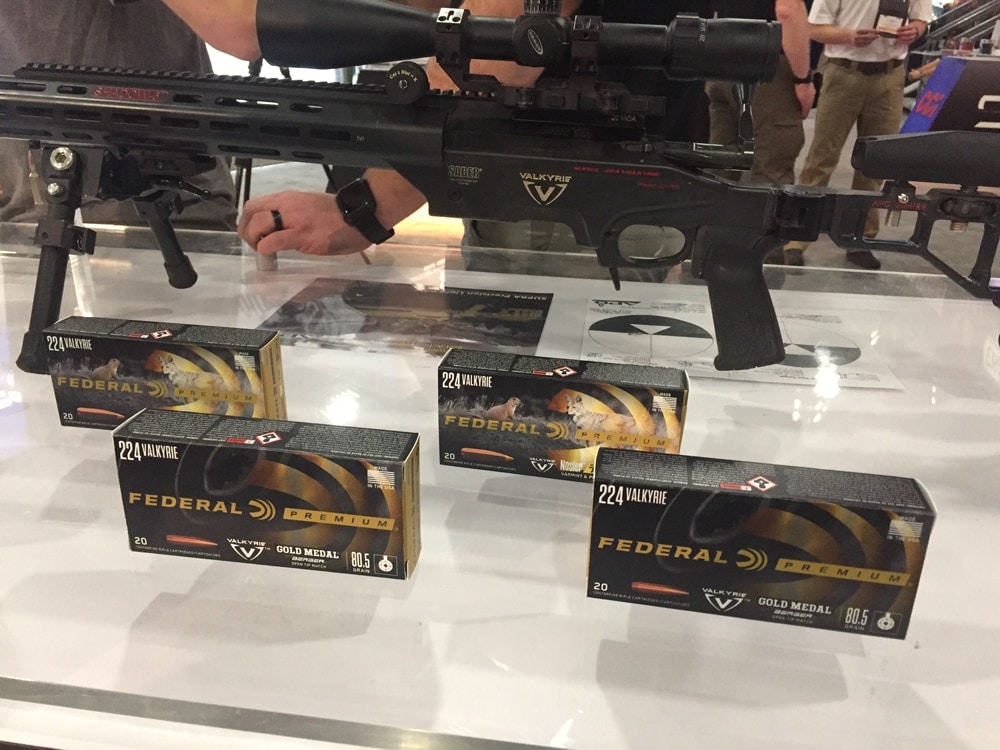 Federal Ammunition is greatly expanding its family of .224 Valkyrie ammunition with three new and interesting loads. The Varmint and Predator is loaded with 60-grain Hornady V-Max bullets, ideal for prairie dogs to coyotes. We’re especially excited to see a pair of Federal Premium offerings. The 80.5-grain Gold Medal Berger Match is perfect for long distance target shooting, while the 78-grain Barnes TSX copper hollow point is capable on deer-sized game. 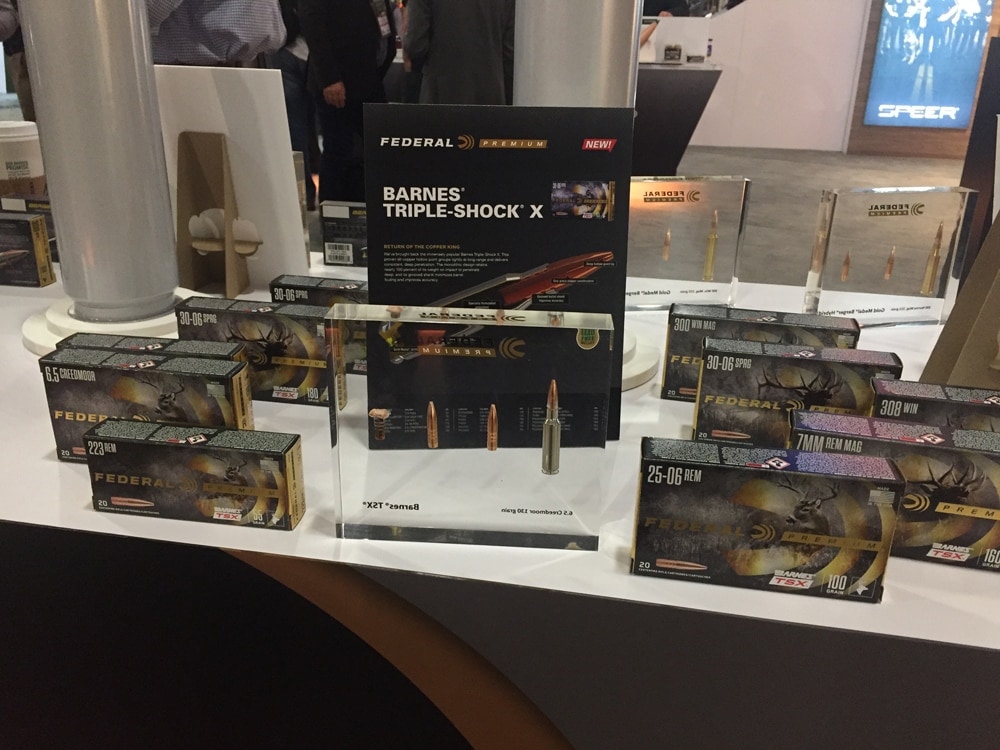 Federal Premium is back in a big way with a full contingent of the Barnes Triple Shock (TSX). There is a caliber for every hunter, with offerings spanning .223 Rem all the way up to .300 Win Mag. The all-copper Barnes TSX hollow point bullets use monolithic construction to retain maximum weight for the best penetration on game. 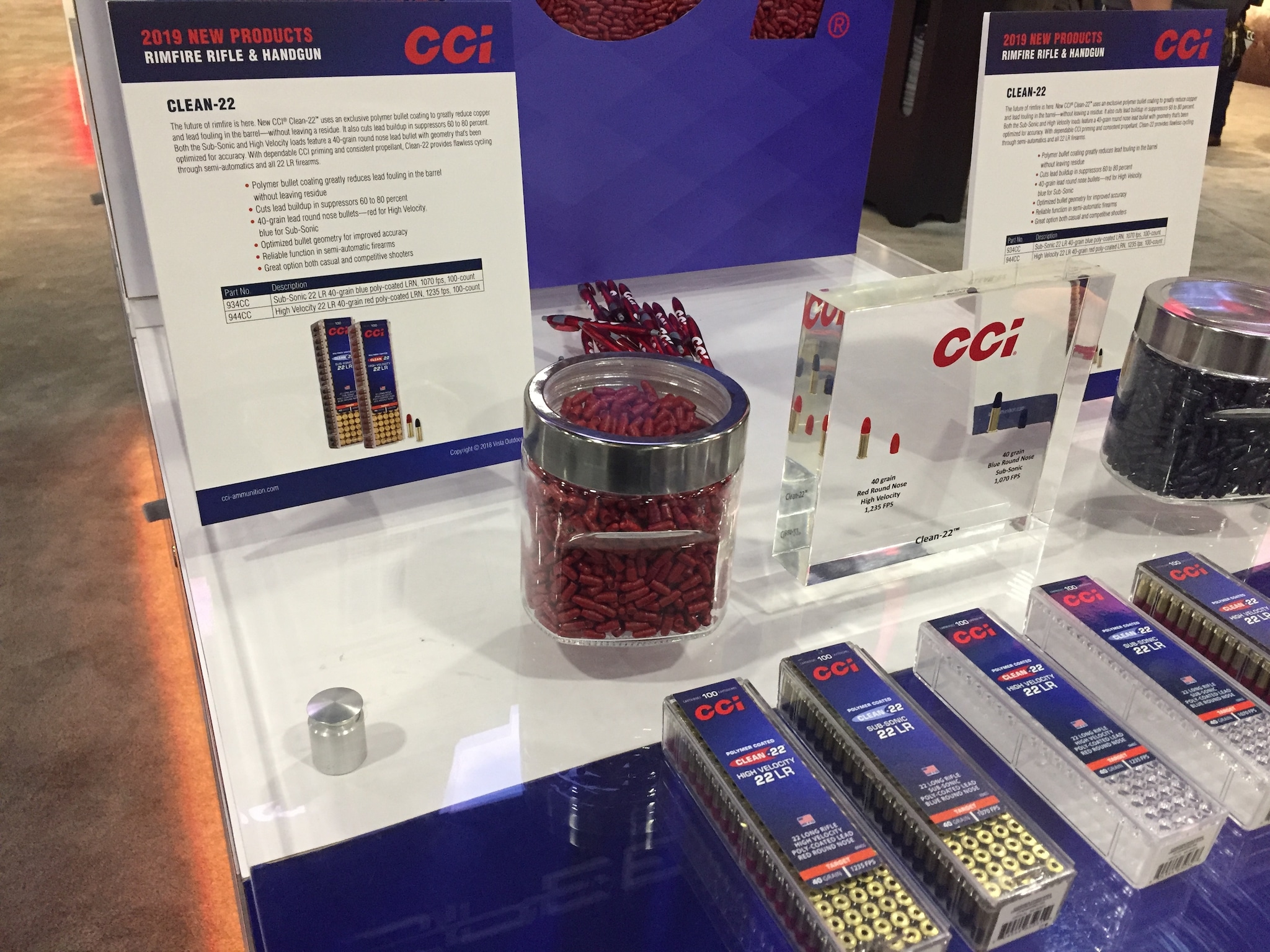 CCI’s Clean-22 technology uses a polymer bullet coating intended to substantially reduce copper and lead fouling in rimfire barrels does so without leaving residue. The new Clean-22’s come in multiple versions: High Velocity LRN, Subsonic LRN, and Quiet-22 SP with all three using 40-grain bullets. They are advertised to fire and cycle well in any rimfire rifles, including semi-automatics. Of particular interest with the Subsonic version is how the rounds cut down on lead buildup inside the suppressor by 60-80-percent.

Just when the .17 Mach II round was pronounced all but dead by a lack of reliable and extant ammunition, CCI is cranking up production in a big way.  For 2019, CCI will be launching a 17-grain Speer VNT polymer-tipped load as well as a HyperVelocity 17-grain Hornady poly-tipped V-Max bullet. Both will come in 50-round boxes and won’t last long once Mach 2 rifle owners find them on store shelves. 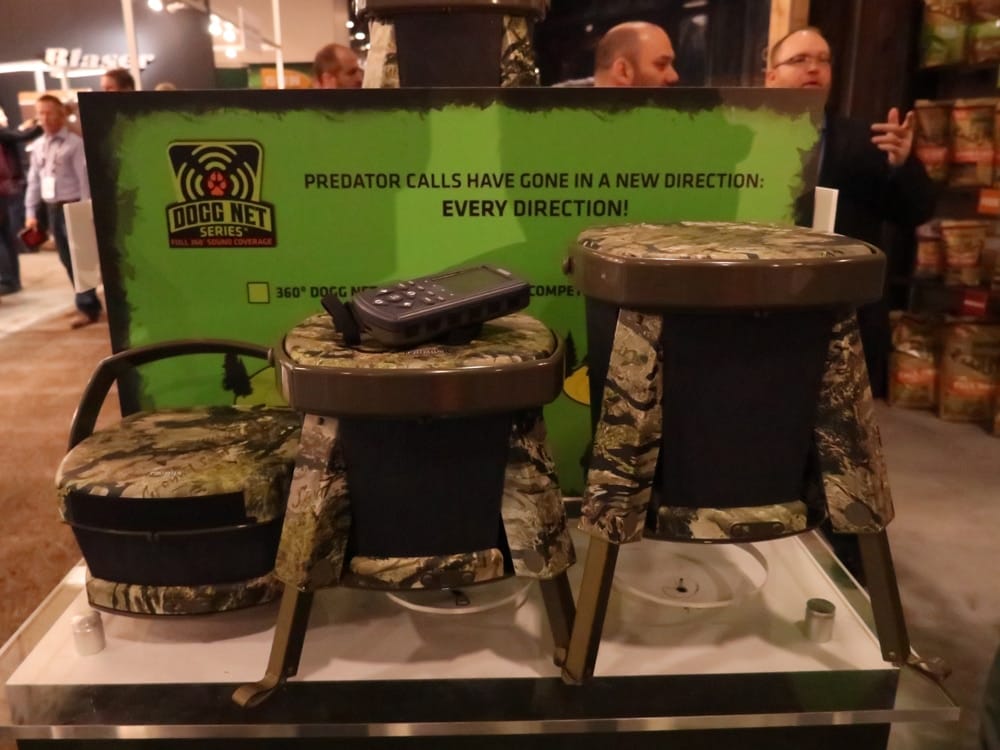 Primos has long been a leader in hunting gear and accessories for most every species, and 2019 marks some big advancements for predator hunters. This new trio of electronic callers includes the Triple Dogg, Horn Dogg, and Top Dogg. They are all wireless, 360-degree e-callers that not only have superior volume, but also allow them to be linked in a chain of remote callers, all controlled either by smart phone or remote. MSRP’s range from $249.99 to $549.99. 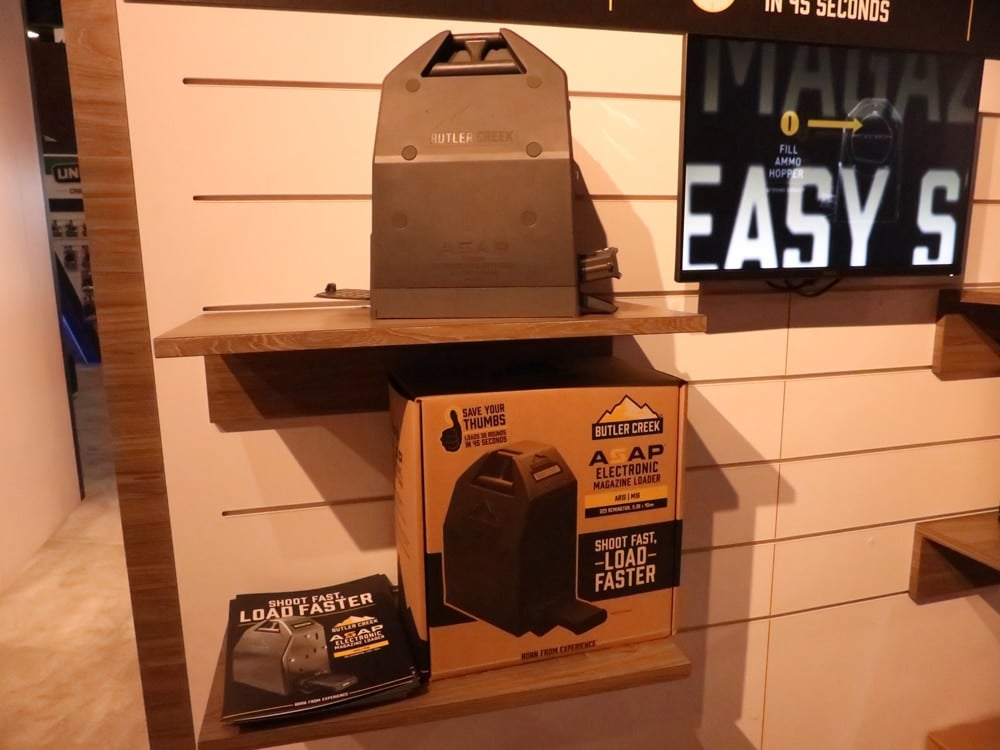 Each year, it seems there’s a gimmicky hand device to help shooters force rounds into high capacity magazines faster. Butler Creek just blew them all out of the water with the first-of-its-kind ASAP Electronic device. Simply dump up to 60-rounds of .223 into the hopper, select the number of rounds you’d like in the mag, press a button, and voila. The ASAP Loader orients the rounds, and within seconds, the mag is ready. MSRP is $329.95.

If you feel like déjà vu, it’s because a single shot .410 shotgun is nothing new. However, Vista Outdoor is leading the charge on using the .410 for turkey hunting, and the Stevens 301 partners perfectly with Federal Premium’s knockout TSS .410 turkey loads. The little 301 wears a 26 inch barrel with an extra full extended choke, ideal for rolling toms with a baby gauge. Mossy Oak Bottomlands or Obsession camo is a nice touch. If you just can’t get on board with the .410 for hunting, the 301 is also available in 20- and 12-gauge, all for budget prices. MSRP is $189. 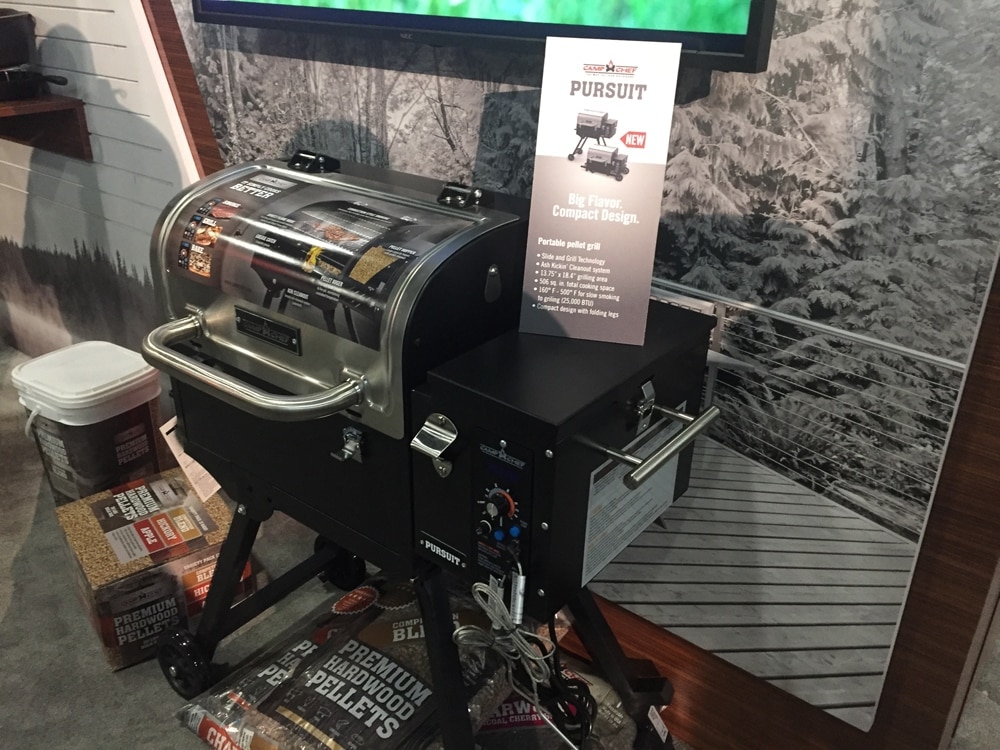 Get the best of home smoked meats and upscale grilling both at home and on backcountry hunts with the portable Camp Chef Pursuit. With 500-square inches of grill space, a 10-pound hopper for hardwood pellets, and electronic auto-start ignition, all on a foldable frame, the Pursuit is built for chefs on the move. MSRP is $524.99. 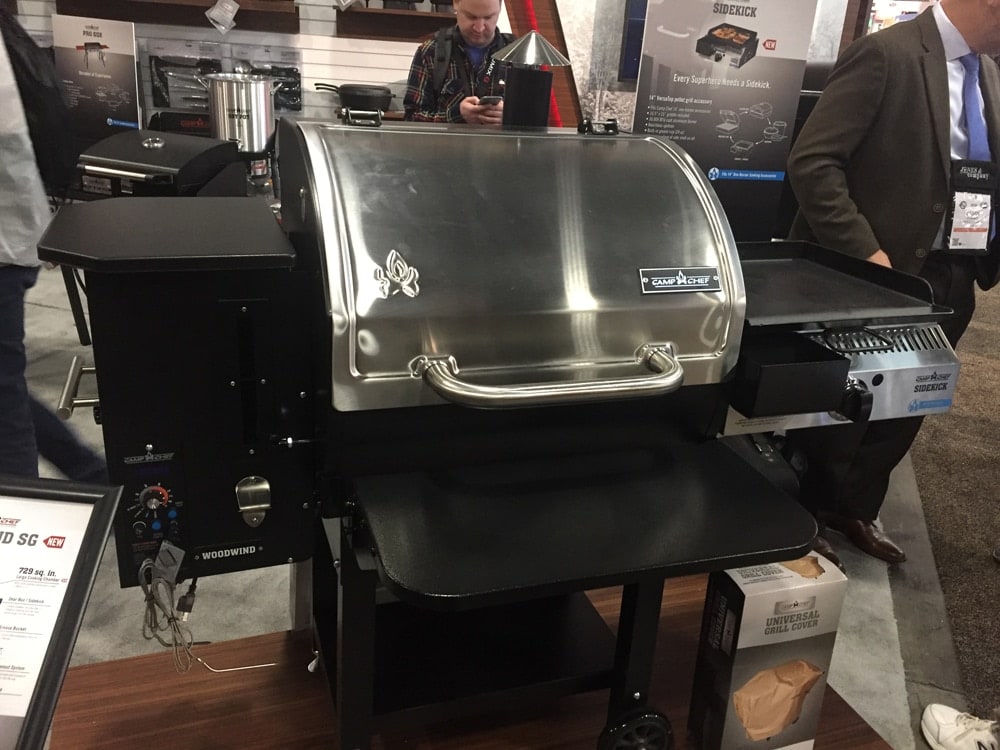 While pellet smokers like Traeger hold a good chunk of market share, Camp Chef is gunning to take over top billing. The new Woodwind SG has the quality,  build, and features to be the best.  Hunters will love the Woodwind SG for smoking, grilling, searing and more. With 4,850 cubic inches of cooking capacity and a 22-pound pellet hopper, this is a beast for the backyard. Popular features include dual LED temp readouts, two meat probes, electronic auto ignition, and the easiest Ash Cleanout system out there. The SG model includes a bonus side-mount in either a sear box or steel griddle. MSRP is $999. 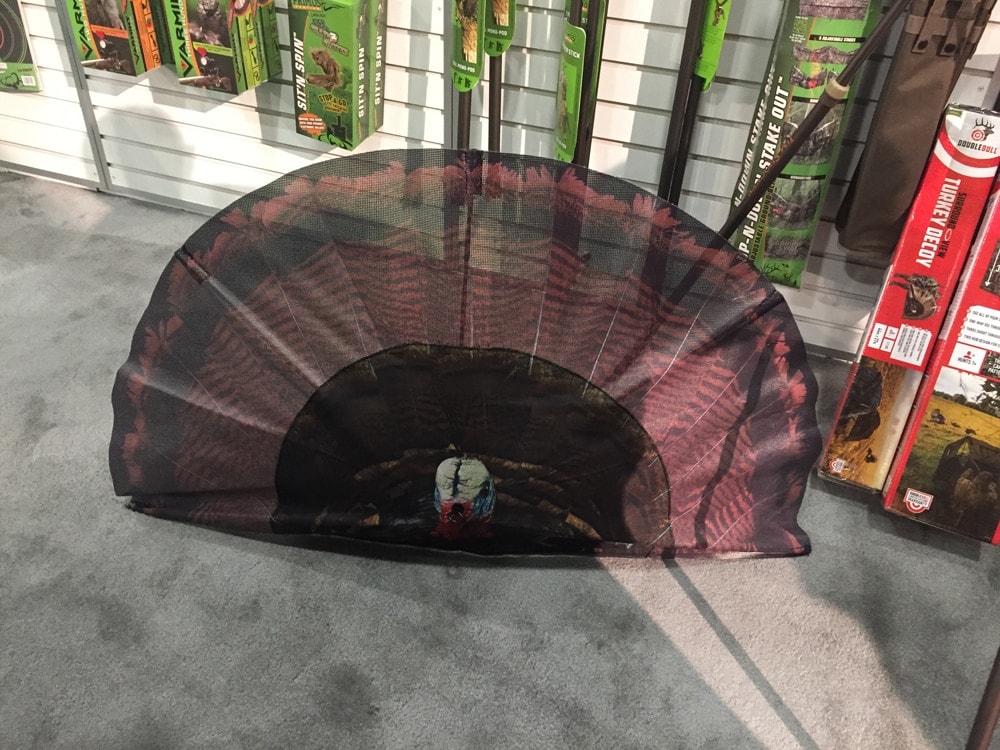 As the up-close-and-personal tactic of reaping turkeys explodes in popularity, decoys built to conceal hunters are at a premium.  The new Surroundview version pops itself to the top of the market, with room for two hunters behind the “decoy” which uses the company’s see-through Surroundview material to keep hunters hidden while still affording a clear view of Mr. Tom. Best of all, its single-hub design is quick to deploy and easily folds up to fit in a pocket. MSRP is $119.99. 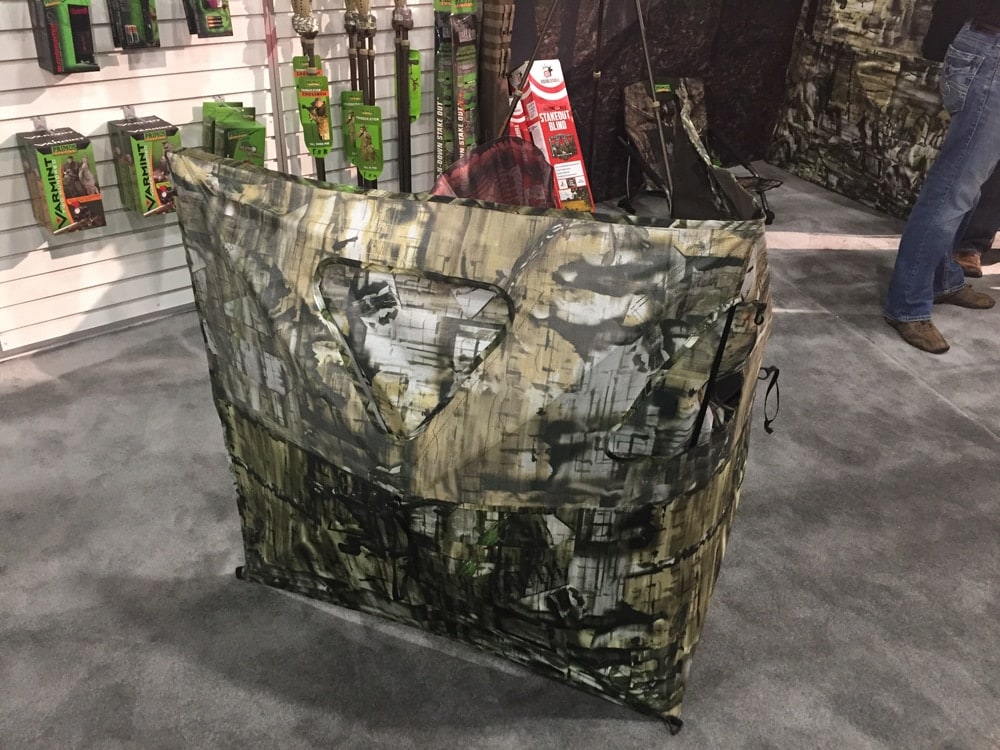 If you’re a more mobile turkey hunter but still appreciate good, quick cover, the new Surroundview Stakeout blind is for you. Not only does it pop up or down in seconds, but stows small enough to fit in a pocket or pack. The one-way, see-through Surroundview walls allow a clear view of the prey. Three shooting windows offer an easy shot, though the blind is low enough that a kneeling hunter can rise up to shoot above the blind. MSRP is $112.99. 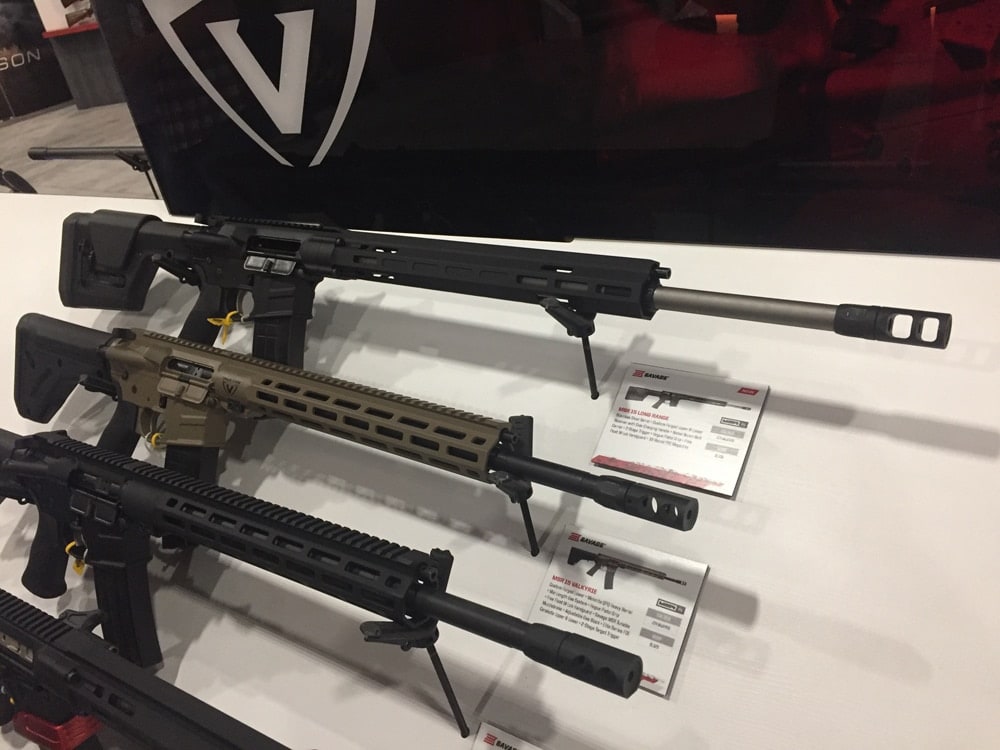 While the initial 18 inch barreled MSR Valkyrie performed admirably, we’ve all been waiting for a longer barreled version from Savage to wring all the potential from that long-range round. The new MSR 15 Long Range is built to do just that. With a 22 inch stainless heavy barrel, side charging handle, and a low profile adjustable gas block, among other upgraded features, this rifle should shine for extreme range target success.