If cowboys were Italian Traditions 1873 Revolvers by Pietta (VIDEO)

Whether you’re a cowboy-action shooter or just fancy yourself a sweet six-shooter, the traditional 1873 single action army design deserves a place in the hearts of gun lovers. While multiple reproductions are already on the market, Traditions — long known for black powder guns — has put their name on a fine line of Italian-built 1873 wheelgun re-makes.

The Traditions 1873 Frontier line of single action revolvers is clearly a reproduction of the SAA design, but this iteration is built with modern bloodlines by Pietta of Italy. The Frontier is available in a wide variety of finishes and options — including case hardened, blued, or nickel; simulated ivory grips or walnut; and calibers of .357 Magnum, .44 Magnum, and .45 Long Colt.  The company has really run the gamut, with barrel lengths from 3.5 inches to 7.5 inches and models featuring classy engraving as well. All are built on steel frames, and are touted by the company as true reproductions, though they make use of a three-position hammer with the modern transfer bar safety. Fixed sights round out the true-to-original package.

While Traditions also offers a cheaper line of revolvers dubbed Rawhide, the heart of the matter rests squarely with the Frontier.  The guns come packed in a bright cardboard box with Pietta paperwork. Our test Frontier is the attractive, color case-hardened, 5.5 inch barreled .44 Magnum six-shooter. MSRP on our test gun is $574, with real-world prices hovering around four bills, making the Traditions Frontier line one of the most affordable repros on the market.

Who among gun owners have not felt romantic stirrings of the old west whilst watching John Wayne slinging a six-shooter, picturing Wild Bill fanning the hammer on a SAA, or William Bonney and the Earp brothers defending their honor with a Peacemaker. While those first-generation originals are now prized as collectors above regular shooters, reproductions like our fine Traditions-by-Pietta Frontier bring that old west flare into the modern era. Excellent craftsmanship, with fine fit-and-finish are obvious right out of the box. For example, tight tolerances on the loading gate reveal the attention to detail. Lockup is tight as a drum, and the trigger on our test gun broke repeatedly at the three-pound mark on our Lyman pull gauge.

With a feature like the transfer bar safety, the revolver can be carried safely with a full six rounds rather than only five with the hammer resting on an empty chamber. The case hardening on our test gun’s receiver is stunning and much better than expected on a gun under what we’ve come to know from the Traditions more budget-conscious name. For those wondering how Pietta stacks up, they have also built guns and parts for Cimarron, whose comparable arms sell for a significantly higher price. 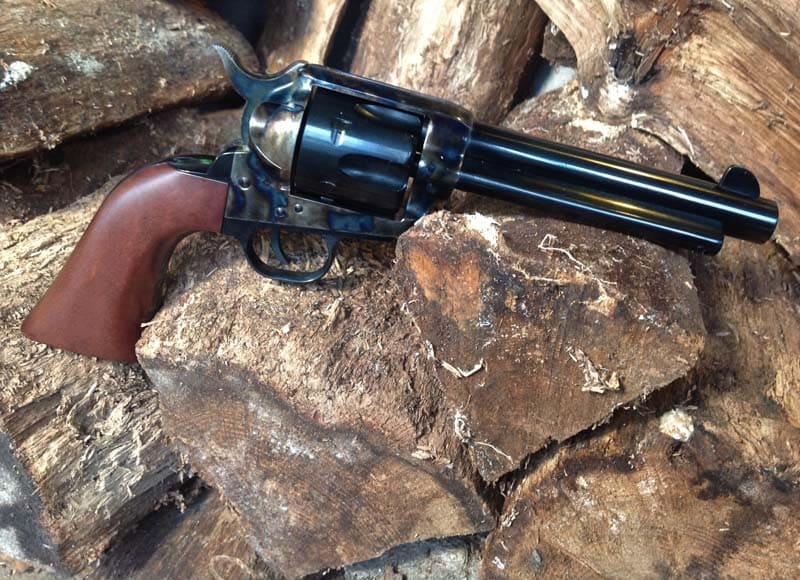 The 1873 Frontier SAA reproduction is true to its original in all ways except safety. Where the original uses a four-position hammer, this new version makes use of a transfer bar safety and three position hammer. The hammer can now safely rest on a loaded chamber. (Photo: Kristin Alberts/Guns.com)

Purists may argue for the old four-position hammer with the firing pin in place and sans the more modern safety; however, this three-stop hammer with the transfer bar is safer and allows a six shooter to safety stock all half-dozen rounds. The Frontier’s action is as smooth as the finish is attractive. Grips are uncheckered walnut, which we found to give the revolver a more classy and understated appearance. We never felt a lack of grip because of the slicker furniture, even when firing the Magnum.

During range time with the Frontier, we a hearty factory mix of .44 Magnum, including Hornady 200-grain XTP, Hornady 240-grain XTP, and Winchester Super-X 210-grain. Though shooters expect recoil from the .44 Magnum chambering, it is especially stout in the SAA style. Though the Magnum is a handful, the heavy steel frame and durable build of the Traditions/Pietta, make the Frontier controllable to shoot. For pure pleasure on the range after the initial testing, we loaded up some Hornady 180-grain XTP rounds, which greatly reduce felt recoil and make it easier to get back on target quickly, though the gun suffered a bit in terms of accuracy.

It took some practice to hit well with the Frontier’s basic 1873 sights, but we did get accustomed to the standard fixed irons. Make no mistake, the Traditions Frontier SAA is no target wheelgun, but that’s not the intent of any single action throwback.  With all firing done offhand at 25 yards, groups were regularly in the 3.25 inch to 3.75 inch range, and a more practiced action shooter could surely tighten things up. For reasons not completely clear, shooting same ranges and targets with the 180-grain .44 Specials opened up to just over four inches, though the pleasure factor increased significantly.

Lockup is tight and true, and even after several boxes of plenty hot .44 Magnum loads and another of Specials, you would not have known the gun from new. With our test gun’s 5.5 inch barrel, this “new” Peacemaker balanced well and had an aptly long sight picture. 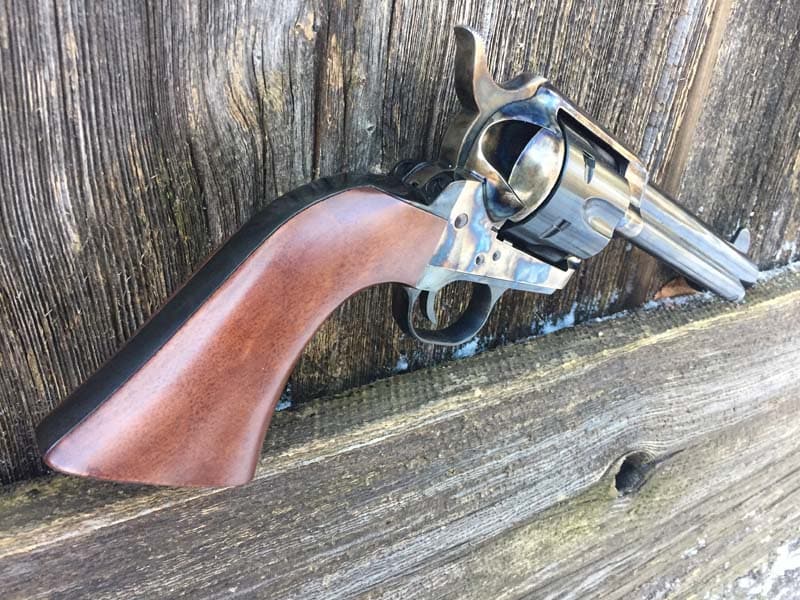 The fit and finish on the Traditions 1873 Frontier SAA is top-notch, as evidenced by the vibrant color case hardened finish, as well as the tight machining tolerances on the loading gate. (Photo: Kristin Alberts/Guns.com)

While price puts the Traditions Frontier at the entry-level range of reproduction wheelguns, the overall quality and build make it accessible and capable for an even wider, and more experienced, audience. If Traditions could grant a few wishes, we would like to see a frame option in the old Colt Bisley style, as well as chambering the SAA in the original .44-40. The Frontier’s target market includes not only western fans, but cowboy action shooters, and even hunters looking to partner a sidearm with their single shot Traditions deer rifle.

For hunters who opt for one of Traditions break-action, single shot rifles in a variety of throwback straight-wall chamberings, the company’s line of 1873 revolvers make an ideal companion. For instance, we recently spent some time with the Traditions Outfitter G2 rifle in .44 Magnum, and now chase that with this 1873 Single Action wheelgun in the same caliber. The caliber-partnerships also work with  .38Spl/.357Mag and .45 Long Colt rifle/revolver models.

Traditions has really placed themselves in a unique market.  Though they’ve long been known solely for a wide range of black powder long guns, many shooters are unaware the company has its name on not only single shot rifles in oft-forgotten calibers, but even better, this healthy line of 1873 SAA reproduction revolver imports.  Whether for cowboy action shooters, hunters, or just aficionados of the old west, Traditions six-shooters pack a heckuva wallop at a reasonable price.