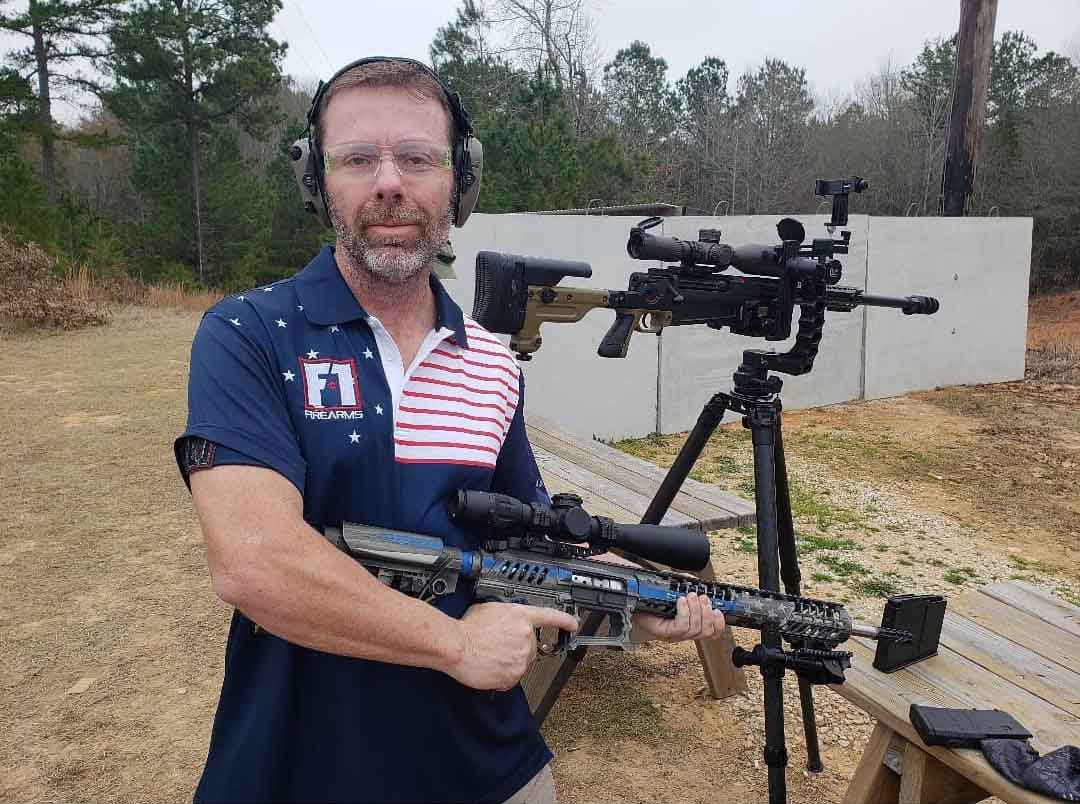 David Smith, aka Parkinson Shooter, racks up points during matches, despite his Parkinson’s diagnosis. (Photo: David Smith via Instagram)

David Smith inspires looks of awe and wonder when he picks up his gun and fires. A powerhouse on the competitive circuit, Smith dominates in competition — so much so that he earned a spot at the 2019 World Rifle Shoot in Sweden. There’s something about Smith, though, that always stops spectators in their tracks. Smith suffers from Parkinson’s, a debilitating disease that affects the Central Nervous System.

Watching Smith approach a firing line, the symptoms are obvious, but once a gun is in his hands, the tremors stop, all is still. It’s part of what he calls “gun therapy,” a term he coined to describe the positive impact shooting sports has had on his life.

Guns.com sat down with Smith to talk life with Parkinson’s and competition shooting.

GDC: How did you come to be known as Parkinson Shooter?

Smith: Well, I have Parkinson’s. I was around 38 when I was diagnosed. I’m 46 now. When I was signing up for my first major match, on the card it asked, “Are you military, law enforcement, veteran, lady division?” But there was no Parkinson’s division. I was thinking maybe I should just label myself that.

Now, I don’t want any special anything. I shoot with able-bodied shooters in competition. I’m just wanting to shoot like everyone else. It’s not against anyone else, it’s against myself — whether I can last or do better than the last week I competed. But that’s where the (Instagram) name came from. It’s where I became Parkinson Shooter.

GDC: You mentioned you have Parkinson’s. Take me back to that day you got that diagnosis. What was going through your head?

Smith: At that time I was a 235-pounds, weight-lighting, body-builder type. I was a big guy and thought I was invincible. I’d had a twitch in my finger, had it a while but we’d been watching it. Thought it was some kind of shoulder injury.

I was standing in the doctor’s office at the neurologist. I think it was a more somber moment for him, like telling someone their dog died. He said, “I’m sorry to tell you this but I’m pretty sure you have Parkinson’s.” I said, “Ok.”

It was just a moment. I was lost in the moment. The doctor gave me a Parkinson’s book. I guess they give it to new patients. I didn’t know that that doctor didn’t understand the intricacies that I was going through. It’s a complex disease and that’s kind of a flaw in the system.

GDC: You mentioned the intricacies of Parkinson’s. Can you lay out some of the symptoms and struggles you face as someone living with Parkinson’s?

Smith: Parkinson’s is a disease that is a lack of dopamine production in the brain. The dopamine is the connector between the pathways and acts like a bridge. My symptoms are all about these certain neural pathways being disrupted. We have a system to reroute the message but the message doesn’t get through so anything from slow movements or slowness even in speech or different things that I do, to shaking, to freezing episodes, choking on liquids … anything the brain controls it has to have coordination. That’s the most disruptive part of it.

Smith: The first two years were the worst. The doctors were trying to medicate me so I wouldn’t shake. They had me on all these pills — five different types, 25 a day.

I was trying to make the best of it and fight back. I started riding bikes and trying boxing to try to get better but nothing really worked and I kept going downhill until I was in a wheelchair/handicap scooter. I was able to walk to the mailbox but that was about it. I’d experience freezing episodes. I’d tell my body to do something and it wouldn’t. I couldn’t do anything. I couldn’t take care of myself.

GDC: How did shooting come into play?

Smith: I thought I’m just going to do some fun stuff, some shooting. I was already shooting a couple times a week or maybe every other week. I stepped it up and I found that that was very calming for the Parkinson’s. So basically, I just kept on doing it.

I started doing it seven days a week, along with some agility training and movement exercises. I was just able to move freely. Kind of like dancing with a partner. Every time I threw the gun up, I was able to move and not short-step, you know shuffle my feet. Basically, it was just a matter of doing more of that. From there, I got into shooting competitions.

GDC: So you go from just a guy shooting at the range trying to manage this illness to competitions and now you’re a pro shooter. How did you make that jump to professional shooter?

Smith: I find the competition world to be kind of a focus that I could put my efforts into to get motivated. I train for a specific weekend and then keep going, going, going all day trying to get the goal of that specific weekend. After shooting for a few months in competitions, I went to NRA Dallas and talked to everybody. I was raising awareness on gun therapy — basically, my therapy instead of boxing, cycling or other stuff the doctors wanted me to do. It was about a month after Dallas, F1 Firearms called and said they wanted to sponsor me.

Meet David Smith, AKA Shaky Dave. He was diagnosed with Parkinson's disease 7 years ago at age 39, declared war on it, and has been one hell of a fighter since!Never giving up, Dave started taking on various activities but noticed that shooting had the most calming effect on him.“I picked up a gun and my hand went steady. Not only that, my whole body felt normal. Off to the races I went.Fast forward to today and I am still shooting everyday as my therapy. I started competing in local shooting matches on the weekend with able body shooters. Even though I show up at the match with my walking cane barely able to walk unassisted, my gun family welcomed me. Apprehensive at first because of safety concerns…until they saw me shoot. These have become some of my best friends and biggest supporters of my Parkinson’s journey. Recently I have been trying to get used to the title of athlete and sponsored shooter instead of Parkinson’s patient. Now sponsored By F1 firearms and Ortiz Custom guns, my war on Parkinson’s just took on a new level of intensity! I’m at the happiest point my life yet everyday dealing with a debilitating disease. My advice to everyone is to find what makes you steady, and pursue it like you never pursued anything before in your life.”America, Let's give it up for one incredible human. ?? #AmericansNeverQuit #proud #wesaluteyou

GDC: On the topic of “gun therapy,” watching your Instagram videos it is amazing what simply putting a gun in your hands does for you — the shake almost completely stops. Was there a moment when it all clicked and you realized shooting was helping you manage the symptoms?

Smith: I took a study that offered free dance lessons. There were two groups — one learned the Tango, the other got 21 lectures as part of a control group. Of course, I got assigned the control group. So I did 21 lectures on neuroplasticity. It was a study about rebuilding pathways after brain injuries and how you can repair the brain. I knew I had experienced it. I’d pick up a gun and then the shake would go silent.

I’d known that repetitive work on movement could rebuild pathways or utilize other undamaged parts of the brain. It was really those classes in that study that it all started to make sense. I didn’t really put two plus two together until that moment. That’s when I dedicated every hour of every day towards beating it. That was the light at the end of the tunnel for me. Before that, it was pretty grim.

GDC: You mentioned earlier you struggled to make it to the mailbox after you were diagnosed. Fast forward to now and you are prepping to head overseas in the fall to represent the U.S. at the World Rifle Shoot in Sweden. How do you feel about it all?

Smith: When I read the email (for the World Rifle Shoot), I read it like 20 times. Then I called USPSA to make sure. It’s the biggest deal of my life and something I never really expected. At six or seven, I dreamed about winning the gold in the Olympics. When I got sick with Parkinson’s, all that went away. So now, this is like a step above that. I look at all the names of people going, all my team members, and I’m blown away that I am actually shooting with them.

GDC: You seem to have such an upbeat, positive outlook. Listening to you talk throughout this interview, I can sense how motivated you are. How do you maintain your positivity in the face of struggle and what’s your advice to others facing similar battles?

Smith: I used to get really embarrassed. I would sit on my hands at restaurants to hide the fact that I had Parkinson’s, but now I just let it go. I don’t really have anything to lose by showing it. There’s no hiding it now. It’s from head to toe, my jaw trembles, everything. I don’t really get embarrassed anymore. I am beyond that.

People with Parkinson’s or other things going on should know that they can do whatever they put their mind to. It only takes hard work. You just got to be dedicated and work as hard as humanly possible. Set a goal, set it, and don’t get distracted.