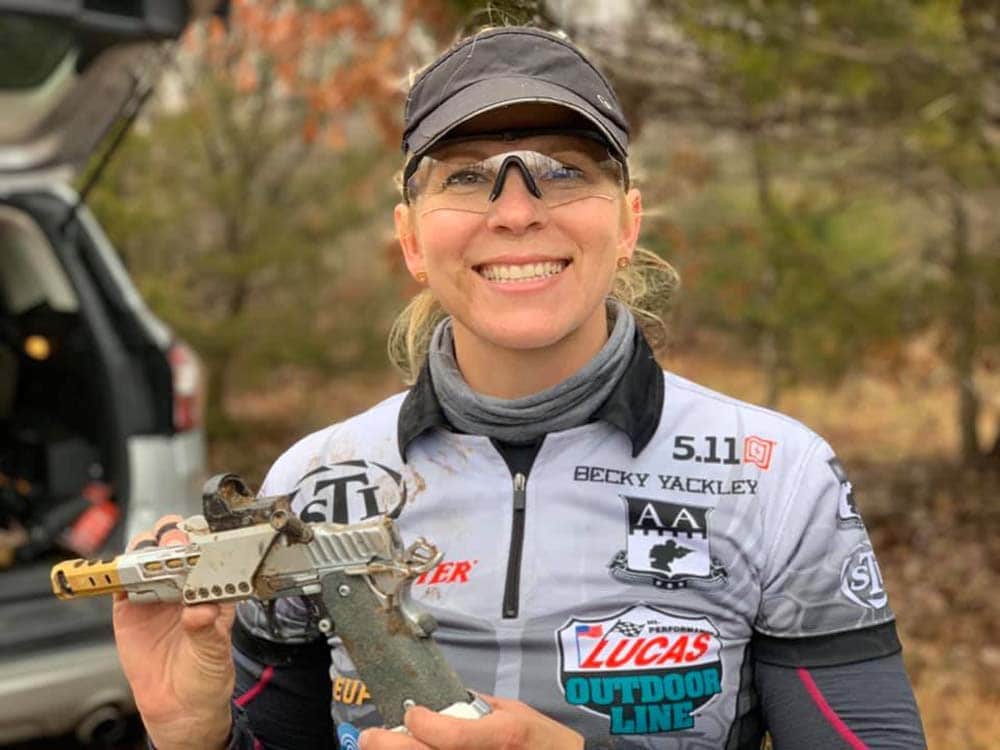 Becky Yackley started shooting competitively three decades ago at the age of 14. Despite life getting more complex with a career, marriage and kids, she’s never given up shooting. In fact, you could say it’s a driving force in her life. Yackley’s husband and three sons also shoot competitively. As a family committed to the shooting sports, the Yackleys understand the intricacies that come with being professional shooters.

Yackley chatted with Guns.com about the misconceptions and struggles competition shooters face and how she manages to keep her successful shooting family grounded and motivated.

GDC: Is it challenging competing as a family instead of just a singular person?

Yackley: It’s not easy sometimes being on the range with your whole family. Most people get that your attention is divided in many directions, but sometimes it feels like you get judged a little more. Also, people think you have everything handed to you because you’re a sponsored shooter.

We were at a match a few weeks ago, and I was gauging all the long range rifle ammo. A friend was in our room and I told the boys that bag X was what had not been filed down. If the cases don’t gauge right — if the rim is just out of round or dinged up in a way that’s repairable — we file it. We used those for sight in. Our friend said, “Wait, did I hear that right? What are you filing on your rifle ammo!?” It’s a lot of work to get five people to a big match. I’m not kidding. Sometimes you file rifle brass.

GDC: You mentioned the misconception that sponsored shooters are handed things and I know you’ve talked about that before on your blog. Specifically, you’ve addressed that there’s an actual lack of support that the industry actually lends to shooters. Why do you think it’s important that companies support and sponsor competition shooters? What’s the benefit?

Yackley: So many times, I hear firearm industry people bemoaning that they don’t have the reach, sales, (and) faithful customers, but they spend money on people who don’t really use or understand their product. Use a company like Magpul as an example. They employ and work with former military, LEO and that’s their customer base. They can communicate and interact with ease because the employees that represent the company speak the same “language.”

It’s what you do with that piece of gear that leaves a mark, draws people in and tells the story. How does the internet celebrity who takes photos as their primary method of interaction with firearms and gear talk with real-world knowledge about how the gear functions in its intended use? It’s why competition shooters have worked with companies — manufacturers need real torture testing, rounds, miles, and weather on gear. They need actual data, not just pretty pictures.

GDC: How do you think companies should better bridge this gap then?

Yackley: One of the best ways is to partner with people who have a real presence in the market you want to reach. That means partner with real people, not internet characters. That’s a huge problem all sponsored athletes see. Why do we know who Serena Williams is? Nike used her every way they can. Why do we know who Tiger Woods is? His sponsors leveraged his skills. Same with Michael Jordan and just about every other big name out there. Sure they were accomplishing things, but we know about their accomplishments and their name because their sponsors actually did something with them, they leveraged it. They got the social side of marketing before social media was a thing.

In the end, it’s everyday Americans who want to exercise their right to own firearms, hunt, compete, defend their loved ones, or just buy a product they like because they are free to do so — those are the people you have to reach. So taking steps to make sure you partner with people who can reach everyday Americans, or at least your customer base, is what’s important. 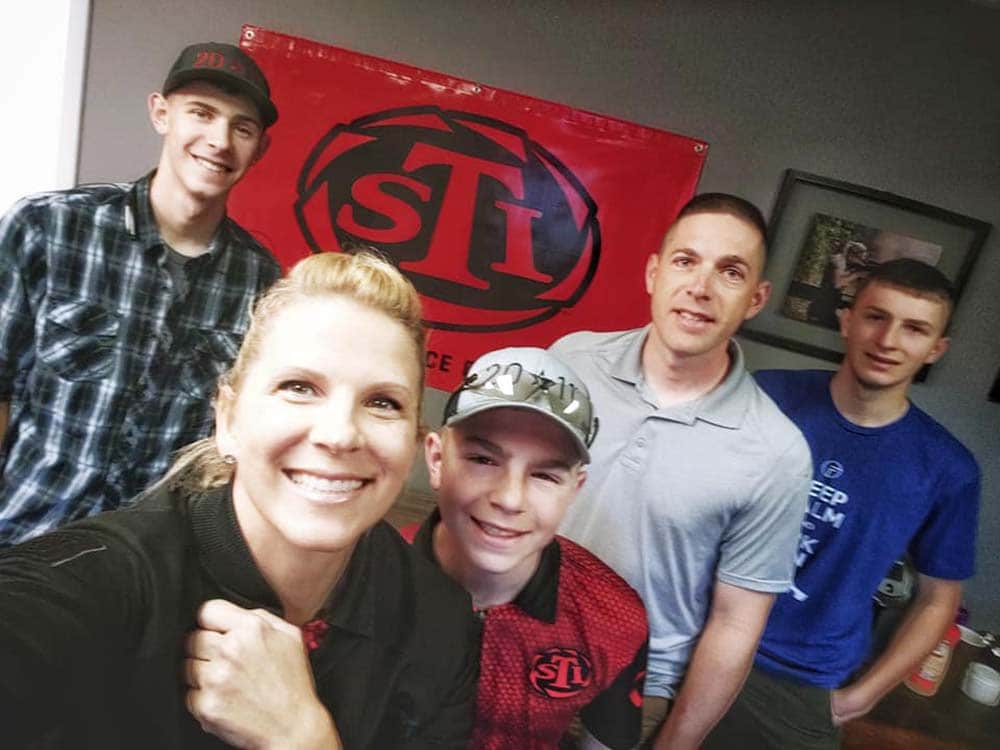 GDC: I think that’s the appeal of the Yackley family. You guys seem really down to earth and fit that “everyday American” mold. How do you think you’ve managed to stay grounded as a family?

Yackley: I always tell people that if action shooting teaches you anything, it teaches you to make things happen. To take what you have, in the moment, and make it work as best you can. We’ve had a lot of struggles with the level and volume of what we do and making it work has meant a lot of physical work and persistent effort. Seeing the boys own their success; to see them understand that what they do is built on their own work, is really the thing I’m proudest of.

GDC: That is a great moment as a parent, but there’s also the flip side to competing which is loss. As a mom, how do you help them overcome losing a competition?

Yackley: We focus on the process, not on the loss. Every stage can’t be a win, but every match is won by stages, and every stage is won by doing each part of what you need to do well — do it clean and do it without hiccups. Being in the moment and process-focused helps.

People who compete at any timed event will tell you there is a fine line where you are riding the ragged edge at the top of the competition food-chain, finding that balance and speed. That line gets more fine as you get better and better. Focusing on the process is the best way to ride that line and sometimes you have to let go of expectations, worries, even what you think you can do, and just focus on the process.

A quote my family has adopted comes from Ron Avery, who we were truly blessed with the opportunity to know. He said: “Make your mistakes fearlessly,” and I love everything that means. Don’t fear mistakes, it means you’re learning. You’re becoming better and you’re free.

GDC: That’s a great perspective. Has there been a time where one of your children really embodied that philosophy?

Yackley: The first time that Tim won Pro Am. He was 17 or 18 and the very first stage of the match he had a problem. I forget what it is now, but he got into the van and as we drove to the next stage he was pretty frustrated. He said afterward (after he won the match) that he told himself he had nothing to lose now, so he could just sort of let go and shoot. 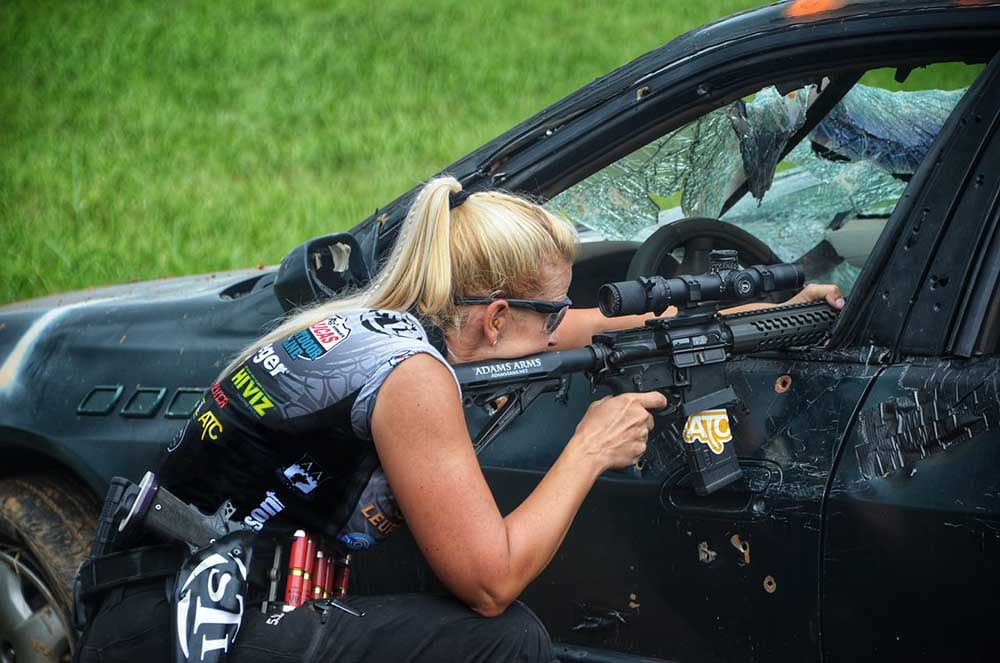 Yackley credits her competitive spirit for the motivation she needs to train daily. (Photo: Becky Yackley via Facebook)

GDC: You guys go pretty hard as a family, constantly traveling and competing. What motivates you to get on the range?

Yackley: Winning. That might sound arrogant, but it’s not. If you want to win, you have to be motivated. Winning doesn’t always mean a “win” in a match. It might mean more of meeting a goal, setting a record, or beating a personal best. Shooting is like that, no matter the discipline.

I also like to try to keep up with the boys and my husband. I’m competitive by nature.

GDC: Being competitive and wanting that W, are there any pre-match rituals you do to boost that confidence?

Yackley: Rituals? Not so much. Habits? Yes. I clean my guns. Someone years ago said that Jerry Miculek always cleans his guns, and we’ve kind of adopted that as a habit — again process, not outcome.

GDC: Finally, how do you unwind after a tough day of training or a big match?

Yackley: A hot bath, preferably with three ice cubes and vodka, and staying up late. I like the quiet and no interruptions to think and work.