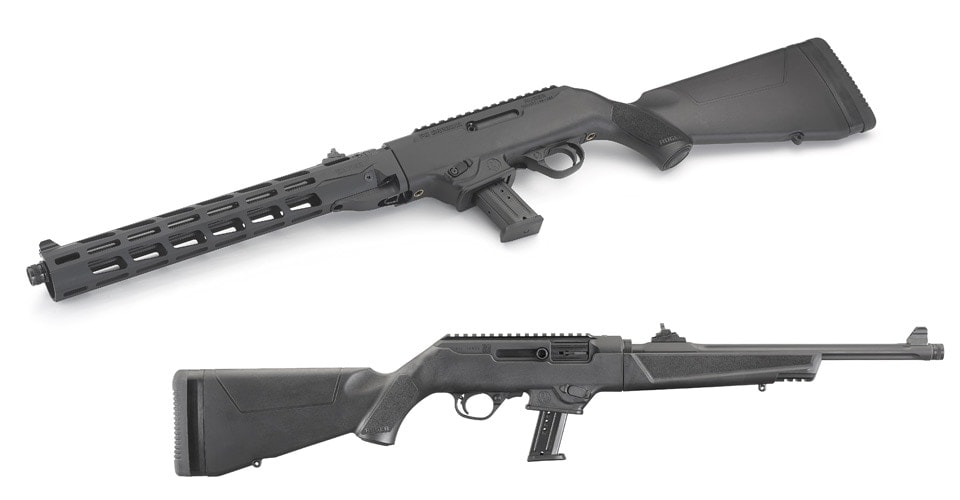 Ruger is growing their PC Carbine line to include guns with M-LOK-equipped free-float handguards and chamberings in .40S&W. (Photos: Ruger)

Ruger has added new PC Carbine models to their catalog including those with free-float handguards and .40 S&W chamberings.

The new models, described by Ruger as adding “improved utility for home defense and competition,” all feature standard black synthetic stocks, 16.12-inch barrels and an interchangeable magazine well system that allows the rifle to accept either Ruger SR-series or Glock mags. Likewise, each has an easy takedown system that allows the short, 34.37-inch Carbine to break down for even more compact stowage.

The biggest difference is in those with the aluminum Magpul M-LOK free float handguard. For multi-state compliance, Ruger also has variants in both the standard and Magpul handguard variants with non-threaded barrels and 10-round magazines.

Models with the ventilated aluminum free-float handguard include numerous Magpul M-LOK accessory attachment slots on all four sides. For California buyers, the guns will ship with 10-round magazines and without threaded barrels.

The takedown PC Carbine will also be offered in .40S&W– to include California-compliant models. Past models were only chambered in 9mm

The PC Carbines use an adjustable ghost ring rear sight and protected blade front while incorporating an adjustable length of pull in the stock. Models with the free-float handguard run 7 pounds while those with those equipped with the more standard handguard are slightly lighter at 6.6-pounds. Each has an aluminum alloy receiver that is Type III hard coat anodized.

Suggested retail, depending on the model, ranges from $649 to $729, with variants featuring the free-float M-LOK handguards skewing towards the higher end of that spectrum. You can expect that price to be significantly lower from dealers.