Inside the Collector’s Corner at NRA Indy (PHOTOS)

With more than 800 booths and vendors, the sprawling 148th National Rifle Association’s Annual Meeting and Exhibits in Indianapolis last week had something for everyone– especially collectors.

Tucked away along the far corner of the 15-acre Indiana Convention Center was a tribal gathering of preservationists, auction houses and relic curators with a rare firearm exhibit open to the public rivaling anything you could see in a museum.

Here are some of the more interesting objects, for your viewing pleasure. 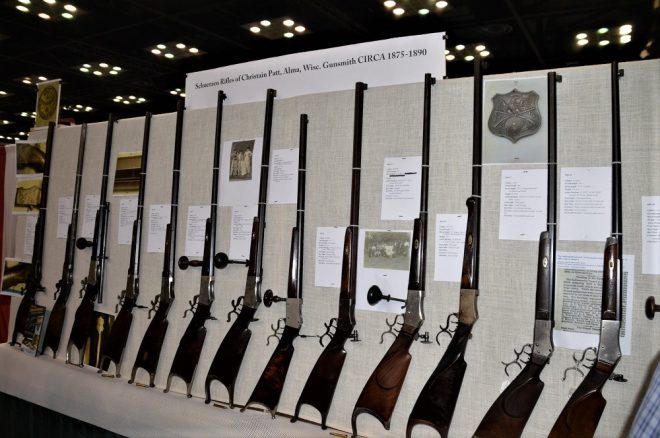 A sweeping collection of the Schuetzen rifles of Wisconsin gunsmith Christian Patt. The precision shooting sport was wildly popular in the U.S. in the late 19th Century and these guns were the 6.5 Creedmoors of their day. (Photos: Chris Eger/Guns.com) 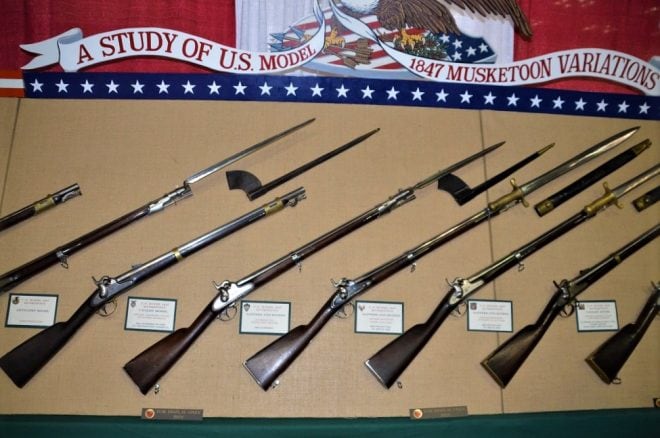 Fans of the U.S. Model 1847 Musketoon were in luck as a nearly complete selection of the gun’s range was covered including a rare Sappers & Miners variant with sword bayonet– of which just 250 were produced. 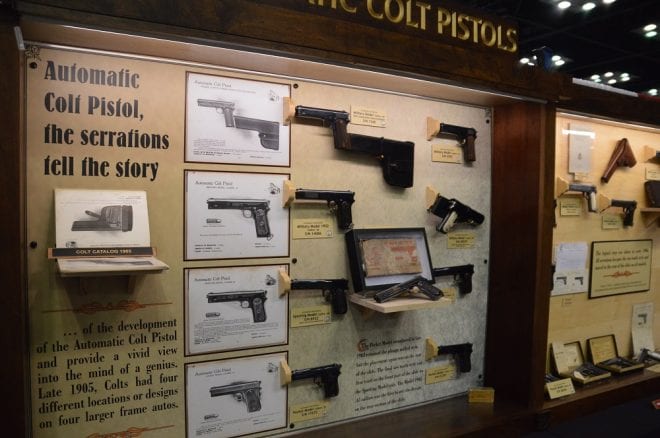 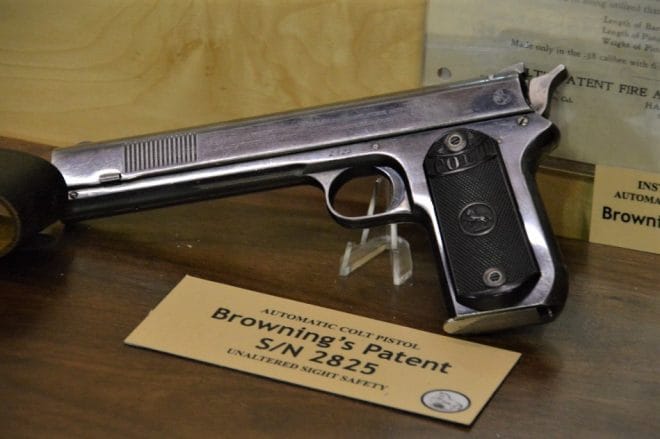 Who said that forward slide serrations are a new idea? 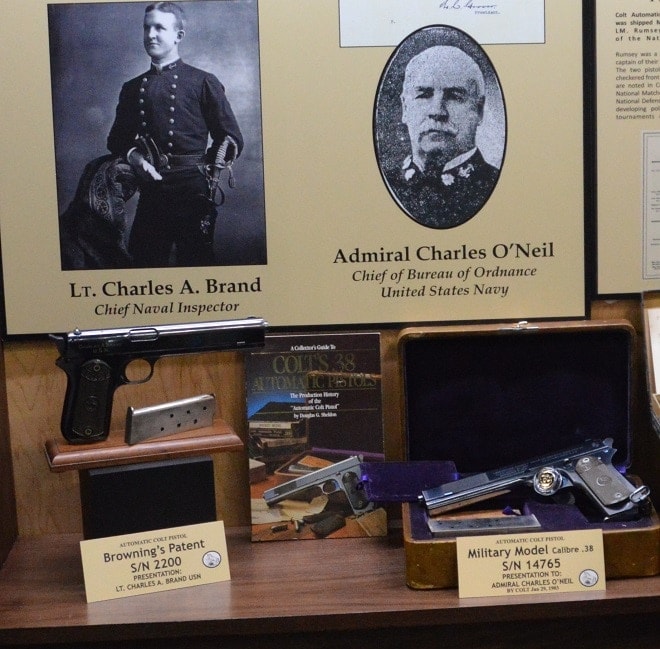 The collection included factory presentation guns given to Lt. Charles A. Brand, chief inspector for the Navy, and Adm. Charles O’Neil, who was head of the Navy’s Bureau of Ordnance. 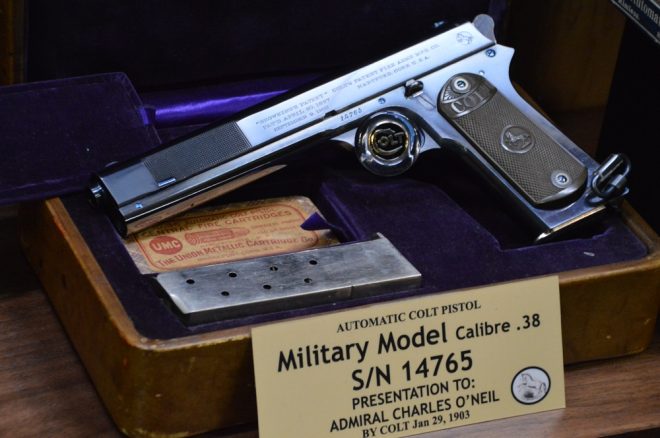 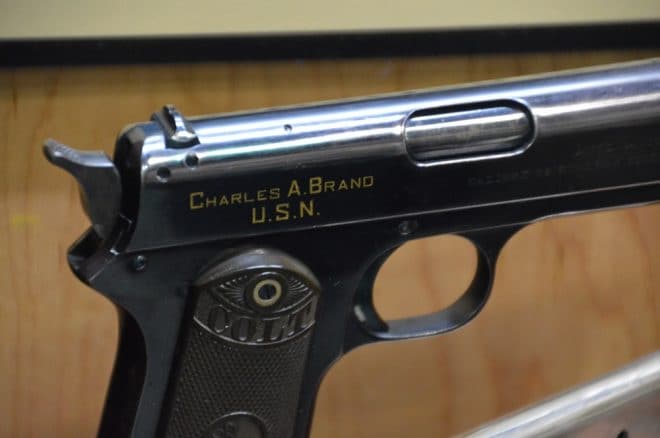 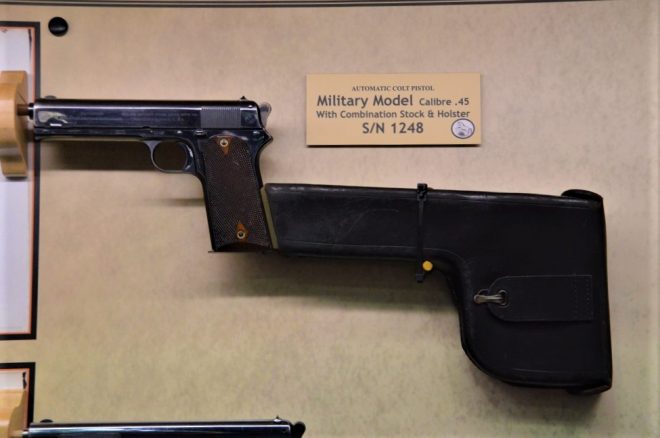 How about this pre-NFA Military Model Colt with combination holster stock? Browning would repeat the concept on his M1903 as well as the Browning Hi-Power. 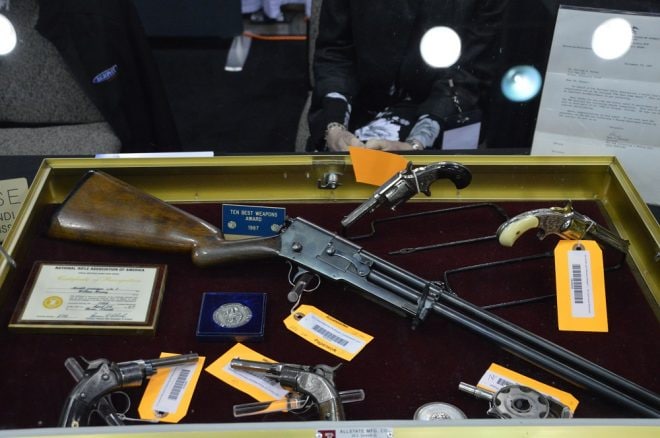 Morphy’s was showing off this cased Marble prototype combination gun as well as a selection of early revolvers that won awards as a group back in 1987. 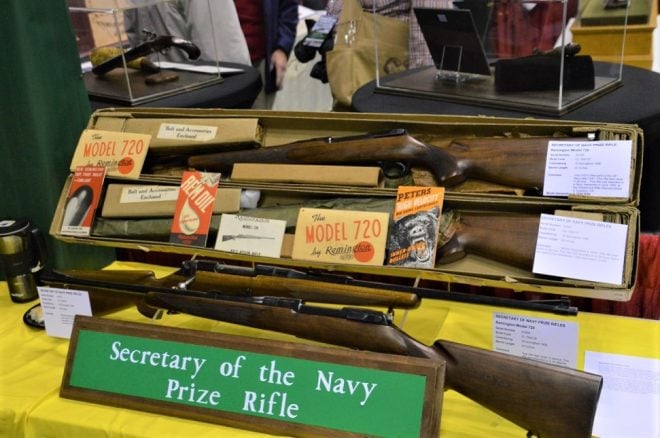 These four Remington Model 720s were awarded by the Secretary of the Navy to Navy and Marine Corps marksmen in 1980, 1983 and 1991. All are chambered in .30-06 and were given as competition prizes, for instance, winning the Wimbledon 1,000-yard match. 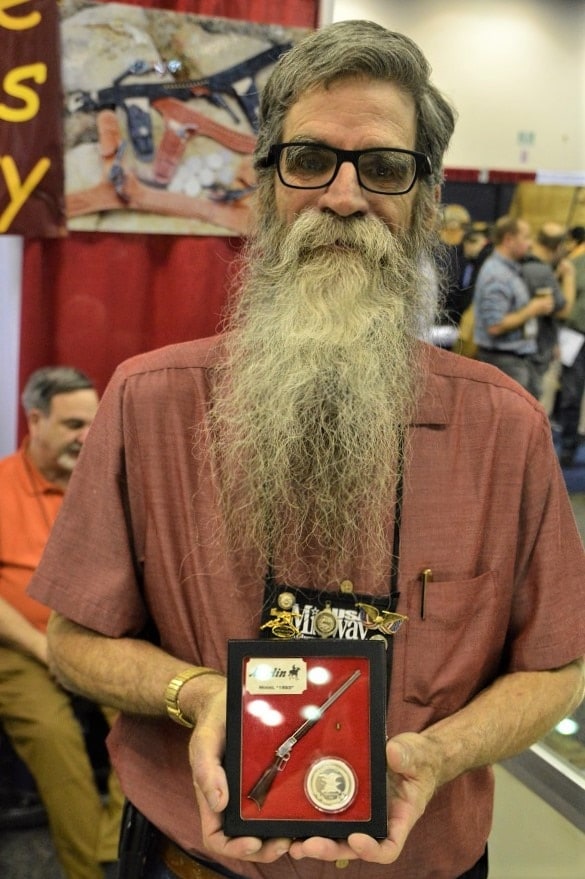 Ted Campbell with the Miniature Arms Society was on hand with his big collection of tiny guns– but surprisingly functional– guns. 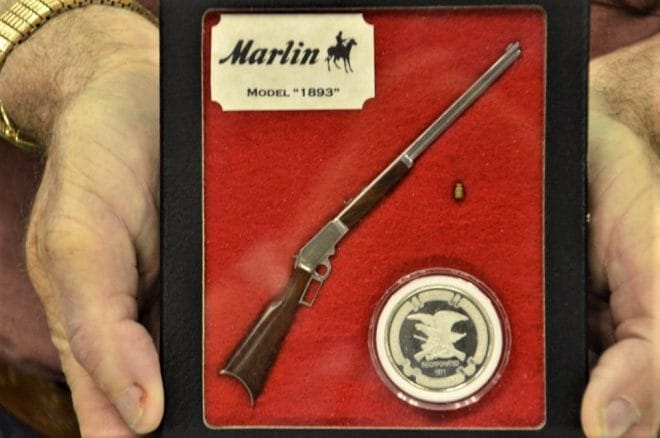 His prize-winning Marlin M1893 scale replica had a working lever, usable sights and an oiler can the size of a pinhead. Campbell said miniatures are no fun unless they are as correct as possible. 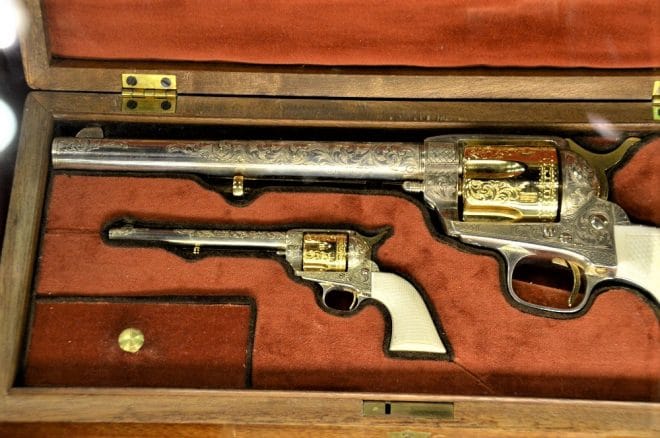 This matched pair of exhibition-quality Uberti Colt Single Action Army repros included a full-sized model with a 7.5-inch barrel and a .27-caliber 47 percent miniature with matching serial numbers. The guns were extensively engraved by Franco Lancini in Italy. 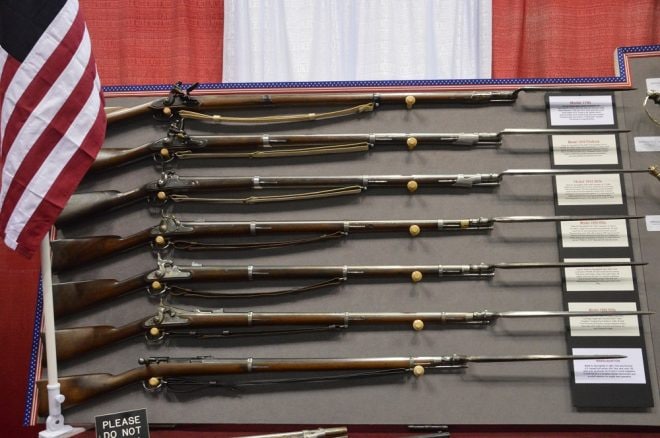 The Springfield Armory Collector’s Association had the full set of U.S. Army Springfield rifle and muskets from the Model 1795 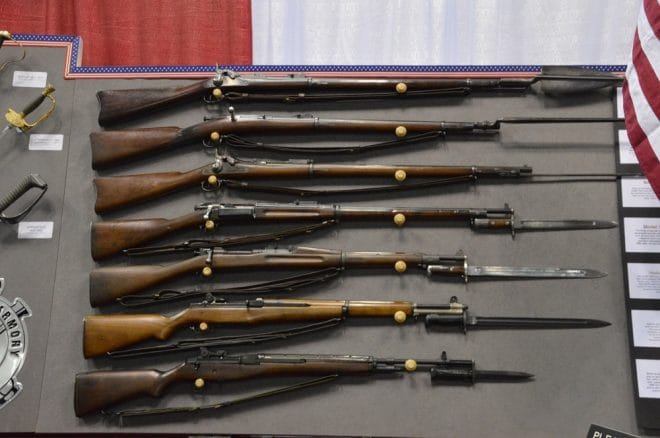 …Through the M14 which the Armory produced until it closed in the 1960s. 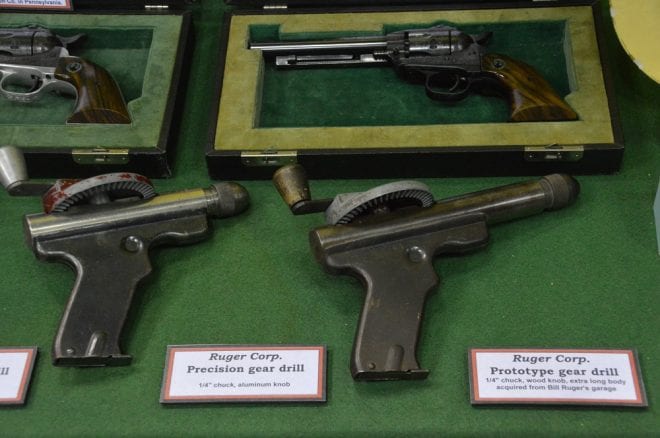 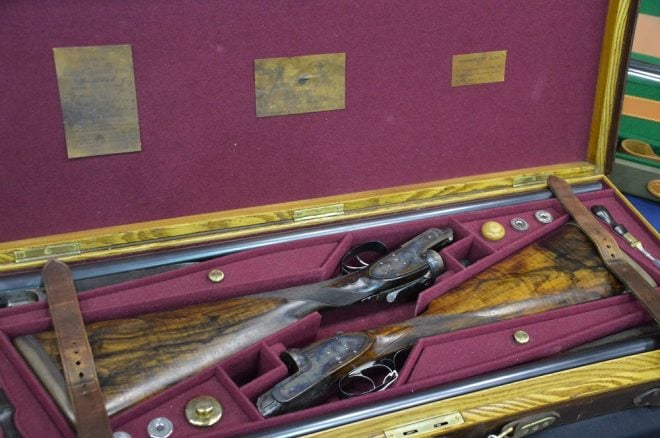 Not your typical pawn shop find 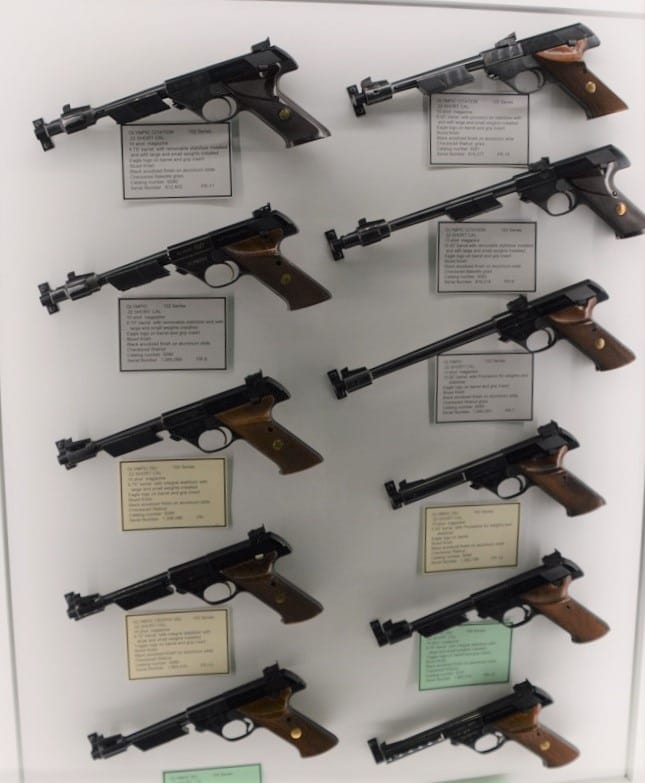 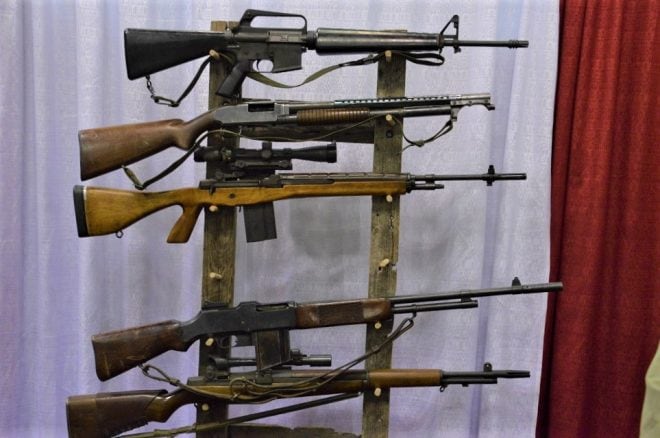 A cross-section of US military rifles and shotguns from the 1950s and 60s including an M14A1 with a full pistol grip and scope. 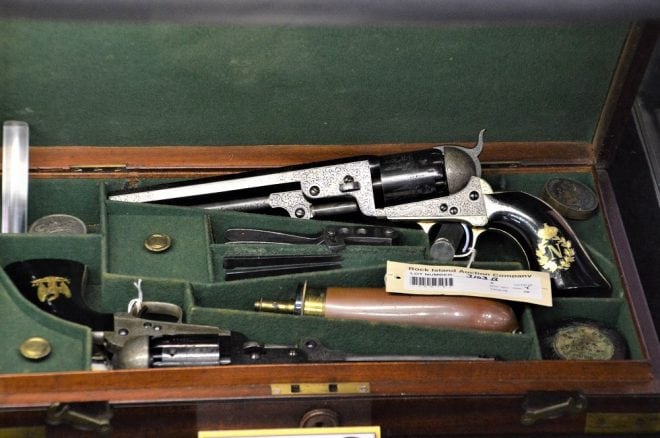 Rock Island Auction Company had a pair of Colt Model 1851 Navies fit for a king– or an Emperor. The set of .36-caliber cap-and-ball revolvers were made for Napoleon III of France. They are estimated to fetch $55,000 to $85,000 at auction. 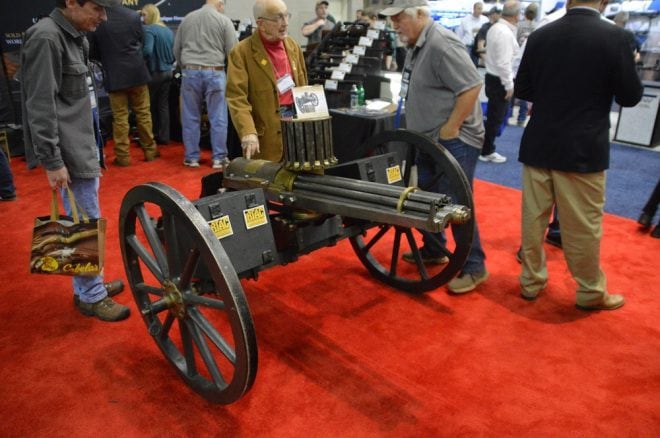 Then again there is always the W.G. Armstrong British Gatling Gun with a Broadwell drum. 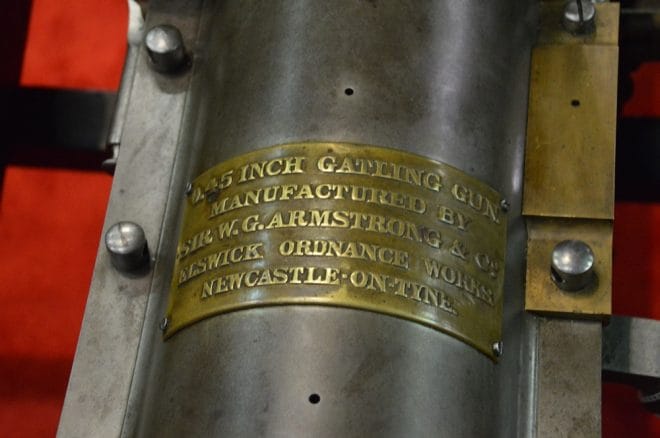 Chambered in .45 Gardner, the fine English hand cranked beauty is estimated to bring as much as $225,000

The next NRA Annual Meetings and Exhibits will be in April 2020 at the Nashville Music City Center in Nashville.