The PXC series comes in four flavors — a 16-carbine, 10-inch pistol, 10-inch SBR and 5.5-inch pistol — built on forged 7075 Aluminum receivers with Nitride coated 4150 CMV barrels. Stag redesigned its bolt for this PXC, completely revamping it to mate with the cone breech in the barrel. Stag says this construction brings strength, safety and better reliability to PCC shooters. In addition, the PXC offers last round bolt hold open and works alongside Glock pattern pistol magazines. 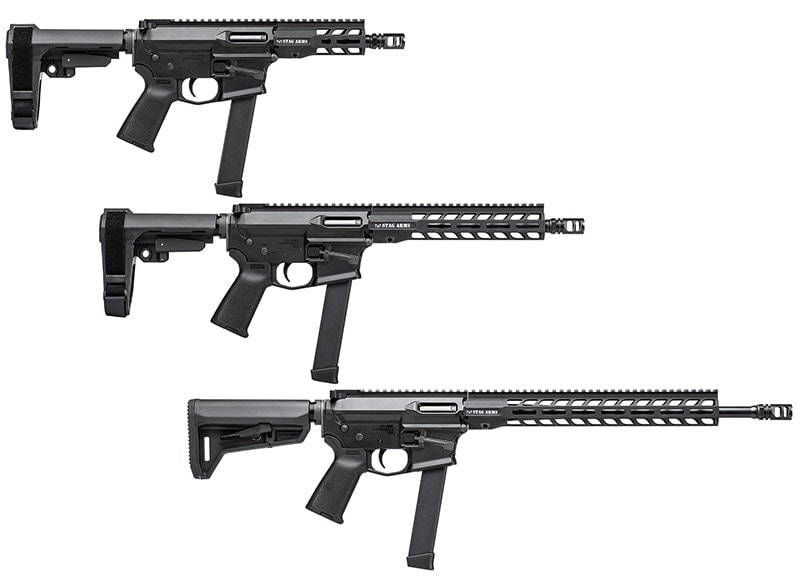 The PXC-9 comes in a few models to allow shooters to find their perfect length. (Photo: Stag Arms)

“The Stag PXC-9 Series is the newest addition to our ever-evolving line-up of AR-style firearms,” Anthony Ash, President for Stag Arms, said in a news release. “By looking at the proprietary bolt and the enhanced features on the receivers, customers will notice that the Stag PXC Series stands out from the competition. This model not only reaffirms our commitment to producing high-quality and reliable firearms but also our commitment to innovating for our customers.”

The PXC series will initially be offered in 9mm but will see the addition of .40 S&W, .45 ACP and 10mm later this summer. Stag also said left-handed versions will appear in 2020. Prices start around $1,249.