Capable emptying a 20-round magazine of .30-06 rounds in under three seconds when cyclic, the Colt Monitor could bring it when needed. (Photo: Springfield Armory National Historic Site, courtesy of Alex MacKenzie, curator)

With the 85th anniversary this week of the last time Bonnie and Clyde went for a quiet country drive, we give you the elusive yet famous Colt Monitor.

Essentially a commercial variant of the World War I-era M1918 Browning Automatic Rifle made with a few tweaks by Colt, the R80 Monitor Automatic Machine Rifle was pitched for use by police, security and prison guards. However, as it was introduced in 1931, prior to the National Firearms Act, it initially could be sold over the counter and via mail order.

In The Highwaymen, a recent Netflix film starring Kevin Costner and Woody Harrelson as the real-life former Texas Rangers Frank Hamer and Maney Gault on their quest to stop the notorious criminals Bonnie and Clyde, Costner/Hamer is shown early in the movie picking up a Colt Monitor at a local gun shop, no stamps required. He also grabs a Smith & Wesson M1917, Remington Model 11, 1903 Springfield, Thompson SMG, and other assorted goodies.

While past Bonnie & Clyde films have focused on and in many cases even romanticized the career outlaw and his (Tommy) gun moll paramour, The Highwaymen focuses on Hamer and Gault and the fateful day on a Louisiana road on May 23, 1934, where the two duos intersected.

The Monitor is upgraded from the standard M1918 BAR, with a redesigned stock to include a pistol grip, a shorter fore-end, different sights, and an 18-inch barrel outfitted with a giant Cutts Compensator. It also ditched the bipod legs of the military version. The result was a LMG that was a good bit handier than its Great War-era forerunner.

The 16-pound Monitor, like the BAR, was chambered in .30-06 Springfield and used a 20-round detachable box magazine. It had a 500-round-per-minute rate of fire. (Photo: Springfield Armory National Historic Site, courtesy of Alex MacKenzie, curator)

Note the massive compensator. It should be noted that earlier in the 1920s, Colt made the early Auto Ordnance Thompson submachine guns which also included a Cutts. (Photo: Springfield Armory National Historic Site, courtesy of Alex MacKenzie, curator)

The Monitor and the BAR are noticeably different when compared side-by-side.

Colt only made about 125 Monitors, with the majority of those going on to be used by the FBI. Pitched in 1933 to Director J. Edgar Hoover personally, the guns cost $300 “with spare parts and accessories.” This translates to over $5,000 in today’s dollars, which points at why more weren’t sold.

As noted by Historical G-Men, a site that has a great section on the Monitor, FBI training documents of the era had agents qualify at 50, 100, and 200 yards with the Monitor, firing 20 rounds at each stage in a combination of single, burst and automatic fire. A 1934 distribution list shows plans to divvy 86 of the guns up across the country at nearly three dozen FBI offices from Boston to San Francisco.

Hamer’s Monitor, reportedly SN C-103168, was acquired directly from Colt and not bought at a local gun shop. It was used on that day in 1934 by a sheriff’s deputy in Hamer’s group and is now in the Texas Rangers Museum.

While Colt made few of the guns themselves, both the 8mm Mauser-chambered Polish Browning (Fabryka Karabinów) wz. 1928 and the Belgian FN Model 1930 light machine guns owed at least some licensing to Colt’s previous BAR versions, and both of those types saw service in Europe during WWII. Colt had better results with their earlier R75 military model gun, which they sold extensively in Latin America.

Today, Colt Monitors are extremely rare, with a transferable model selling last year at Rock Island Auction for $115,000. The Springfield Armory National Historic Site has one in their collection, which they have graciously photographed for this article.

Guns.com also spotted what looks to be one at the Indiana War Memorial in Indianapolis earlier this year. 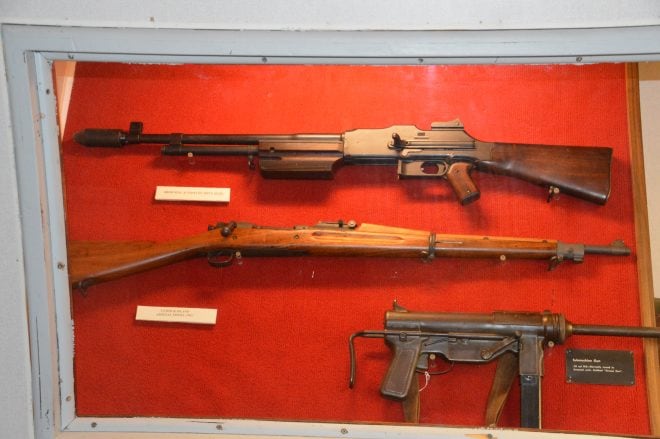 That Cutts Compensator, tho. The gun is labeled by the IWM as an M1918 BAR. (Photo: Chris Eger/Guns.com)

Until you can get out to one of these great museums, find yourself in a forgotten FBI armory, or save $100K for your own Monitor, you can always catch the gun on the silver screen. A Colt R80 appears not only in The Highwayman in several cameos but also in the 2013 film Bonnie and Clyde, in the hands of John Hurt who portrays Frank Hamer.

Check out the great selection of firearms inside the Guns.com Collection and Certified Used Guns.