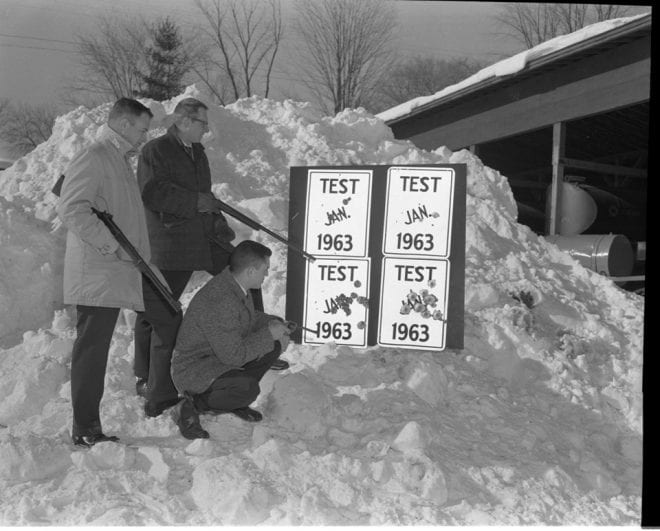 These sign sharpshooters are dressed to impressed and look ready to see what their lead farm yields. (Photos: Maine DOT)

The Maine Department of Transportation this week posted a series of throwback pictures to what could best be described as destructive highway sign testing. The photos show three men in slacks and crew cuts dutifully examining bullet-riddled signs. The trio are equipped with what looks to be a Harrington-Richardson revolver, a lever-action cowboy gun, and a break-action shotgun.

“At Maine DOT, we like to say, ‘we’re not your grandfather’s DOT anymore!'” said the department. “Well, here are a few pictures to prove it! Yes, this is one way they used to test signs. No, we don’t test signs this way anymore! #TBT”

A 1963 newspaper article accompanying the post says the test panels were taken to a gravel pit and subjected to fire from a .22-caliber revolver, a 16-gauge shotgun, and a .30-30 carbine. The ballistic perforation, coupled with exposure to the harsh New England winter and the regular application of saltwater spray, was designed to see how long the panels would hold up under real-world conditions. 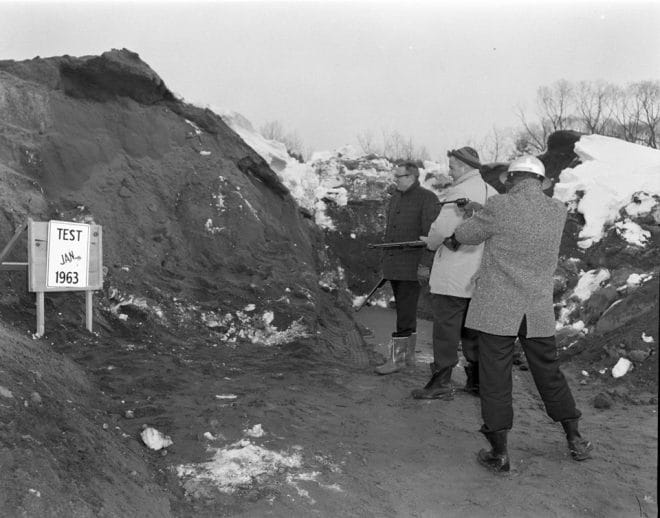 The men in the picture are identified as Al Godfrey, Conan Furber, and Assistant Traffic Engineer Richard Luettich, with the latter explaining that bullet holes in highways signs were a common sight on Maine highways. The article passes along that, “the careless individuals who pursue this unattractive hobby tend to throw lead at certain letters in the copy– an “o” or a “d” or “b’.”

The article does go on to concede the fact that snowplows often proved fatal to highway signs as well.