The New Mossberg MC1sc is Ready to Carry (VIDEO)

Mossberg’s newest offering for 2019 is the MC1 pistol. It has been over 100 years since Mossberg produced a handgun and the one prior to the MC1 was a four shot trapper pistol named the Brownie. So to see them release a polymer, single stack, 9mm striker fired handgun came as a little bit of a surprise.

The MC1 is not only an unusual product to see out of Mossberg but the magazines it uses are also an interesting choice. The MC1 uses original Glock 43 pattern mags instead of a proprietary Mossberg magazine considering that the magazine is half the battle when making a reliable a pistol. Not only are Glock mags that but they are also plentiful.

When you open your new MC1 you will see two clear single-stack magazines. One mag will have a pinky extension with a capacity of seven rounds. This magazine provides a full grip to the MC1 even for those with bigger hands. The second magazine is a flush fit with a capacity of six rounds and will cut down on any “printing” but will leave your grip some what compromised. 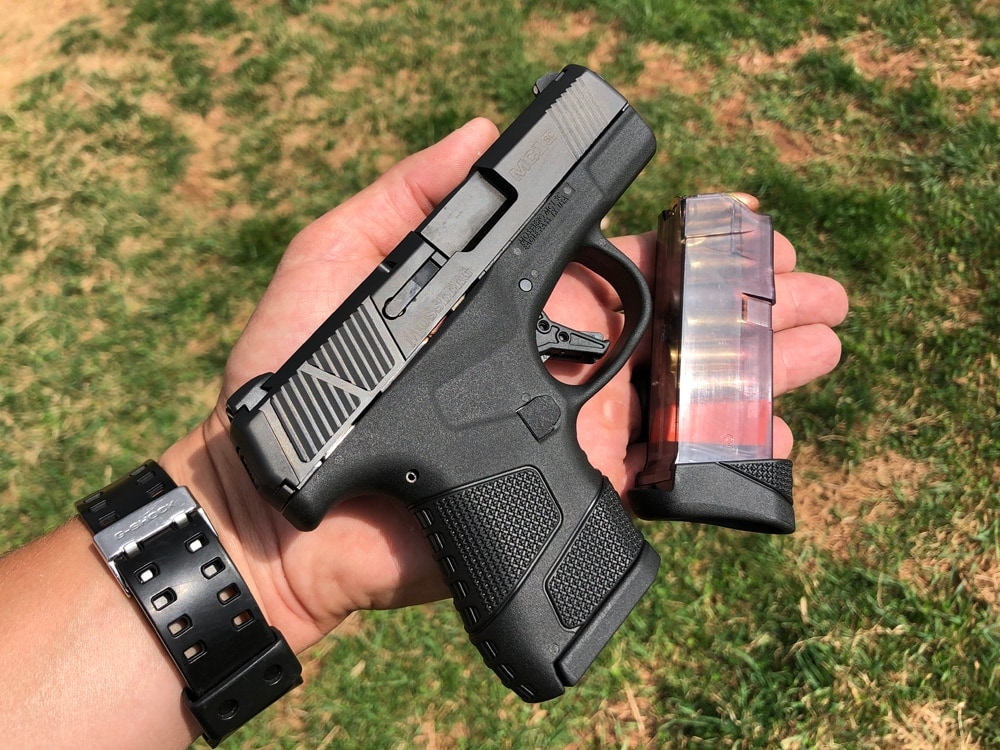 I also ran a variety of Glock 43 mags through the MC1 with good success. Naturally, my first inclination was to try factory Glock mags. These of course were boringly reliable and dropped free from the MC1 with ease. Next, I tried a factory Glock magazines with an aftermarket Hyve baseplate. These caused an issue because they would not lock up into the gun. The baseplate prevented the mag to fully insert into the MC1. Other baseplates may give enough clearance but you will not know until you try it. Finally, I tried a variety ETS magazines including their extended 12 round G43 mag which also worked without a malfunction.

The big question is how does the MC1 compare in size to the other micro 9mm’s in its class? The MC1 comes to market with a 3.4 inch barrel and weighs in at 19 ounces unloaded. This is almost identical to the weight and length of the very popular Glock 43, which is somewhat of an established benchmark for the micro single stack genre. Although the overall profile of the MC1 being only a hair bigger than the Glock 43.

While shooting the MC1 I found that it was very controllable for its size. That can be a rare trait to come across for guns this small. The beavertail allows you to get a very high grip which maximizes the real estate that is available on this this tiny handgun. In addition, it is putting the bore axis directly in line with your grip which helps mitigate recoil. I rarely ever had to adjust my grip after firing strings of three and four rounds. 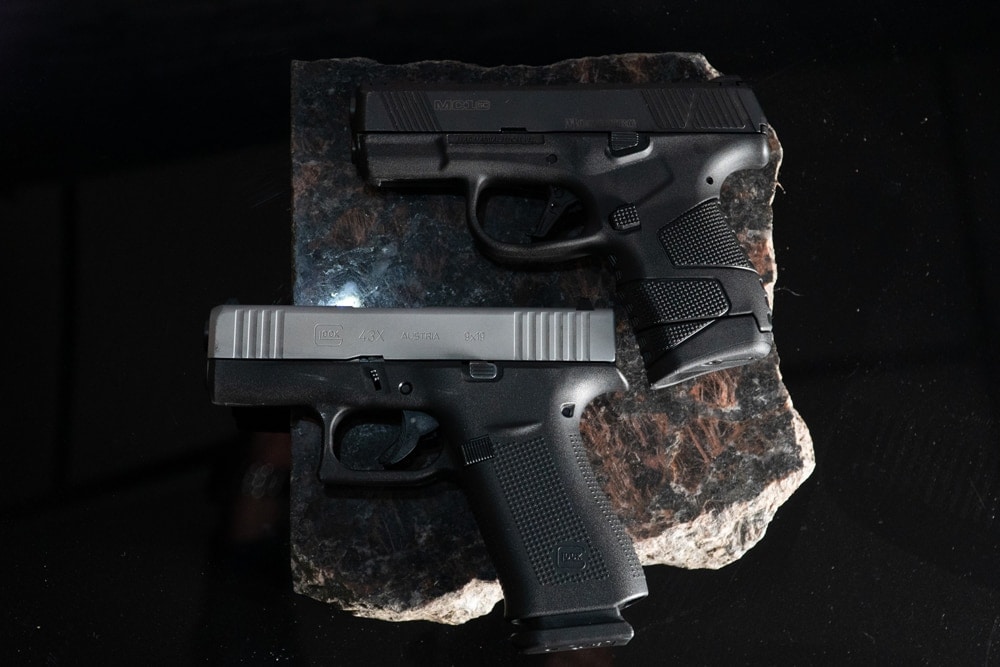 The MC1 comes to market with a 3.4 inch barrel and weighs in at 19 ounces unloaded. This is almost identical to the weight and length of the very popular Glock 43, which is somewhat of an established benchmark for the micro single stack genre. (Photo: Ben Brown/Guns.com)

There is nothing worse than having to use a small framed handgun with a trigger that weighs a metric ton. It just makes these little guns so much more difficult to shoot. Thankfully Mossberg did a great job with the MC1’s trigger. The trigger is around 5.5 pounds and its range of motion feels very similar to a Glock trigger. Mossberg decided to further increase the value of the trigger by adding a flat shoe. I have always felt that a flat shoe provides a more tactile and even trigger press. It is really refreshing to see a company make an effort to provide a great trigger.

Is the MC1 a Competitive Option?

Time will tell if the MC1 can stand against some stout competition in the arena of micro single stacks. To give it the best chance possible Mossberg obviously did their consumer research when developing the MC1. It checks off a lot of the boxes that people desire out of a handgun these days. With that in mind it also has an MSRP of $425 which is a very aggressive price point. For not producing a handgun in over 100 years, Mossberg sure seemed like they knew what they were doing with the MC1.