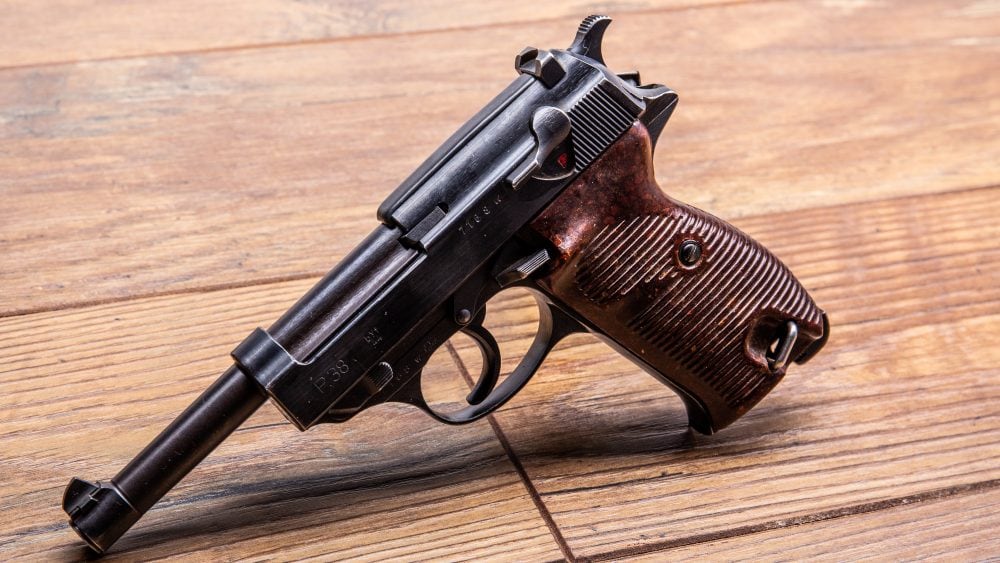 This Mauser-made P-38 9mm up for grabs from the Guns.com Vault bears WaA135 Waffenamp inspection stamps and the byf44 manufacturer’s code used by Mauser for these WWII-era guns. (Photo: Richard Taylor/Guns.com)

One of the first 9mm combat handguns, the single-stack Walther P-38 has seen continuous military service for over 80 years.

Springing from the mind of Fritz Barthelmes and Fritz Walther — the pair had earlier worked on the Walther Police Pistol (PP) — the patents for the P-38’s prototypes were filed in 1936 and made it into production by 1940 to replace the German Army’s vintage toggle-action Lugers. 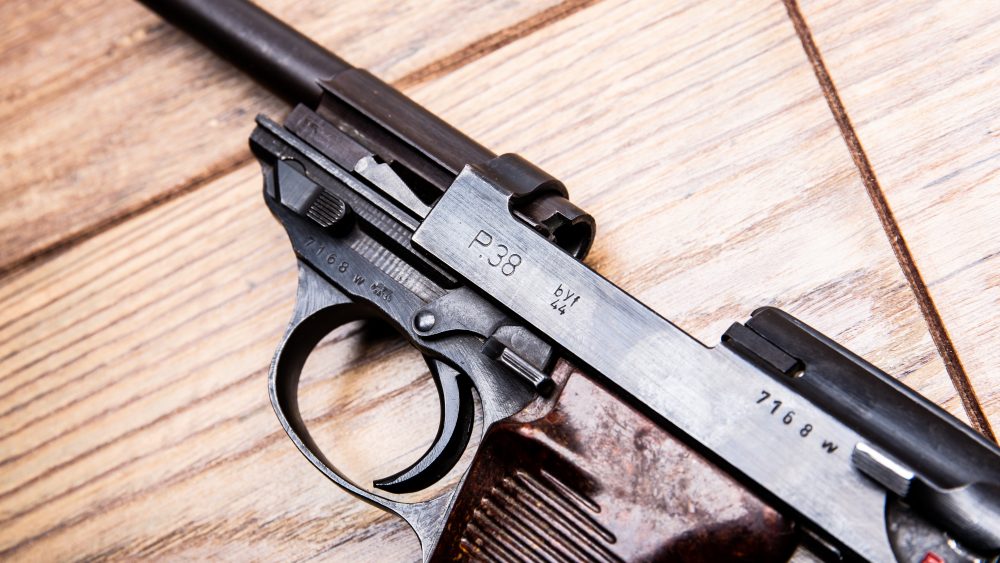 The first production semi-auto pistol to use a double-action/single-action trigger system, the P-38 had a 5-inch fixed barrel, which aided accuracy, and an 8+1 capacity. 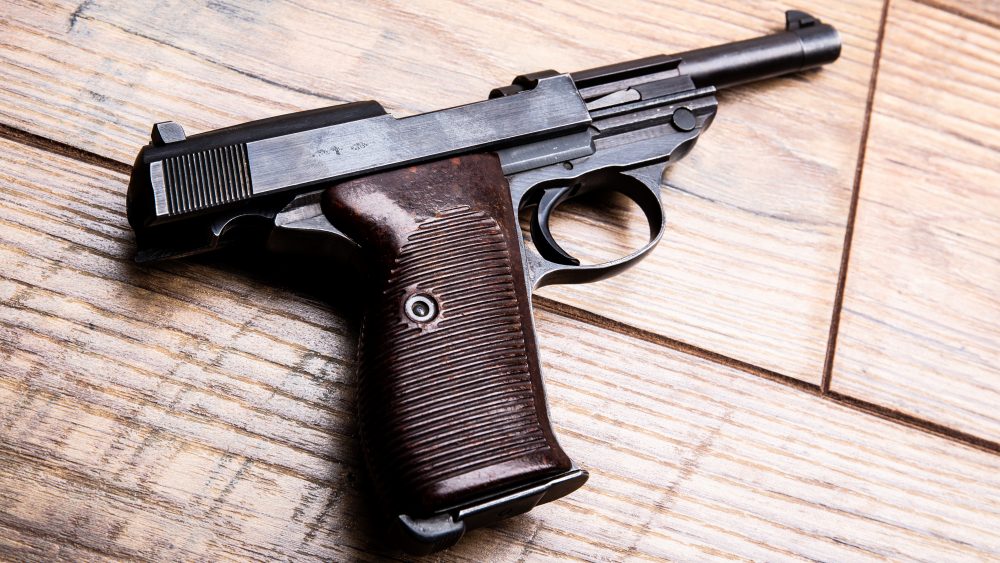 About a third of P-38s made during WWII were produced by Mauser. (Photo: Richard Taylor/Guns.com)

Weighing in at about 34-ounces, the P-38 was about as heavy as the American Colt M1911 .45ACP and Soviet TT-33 7.62x25mm handguns. However, when compared to the revolvers used by Great Britain and others, it was a much more modern design.

In all, over 1 million P-38s were made in Germany during World War II. Demand was so high for these handguns that they were made not only by Walther but also by Spreewerk and Mauser, with the latter company cranking out over 300,000 pistols. 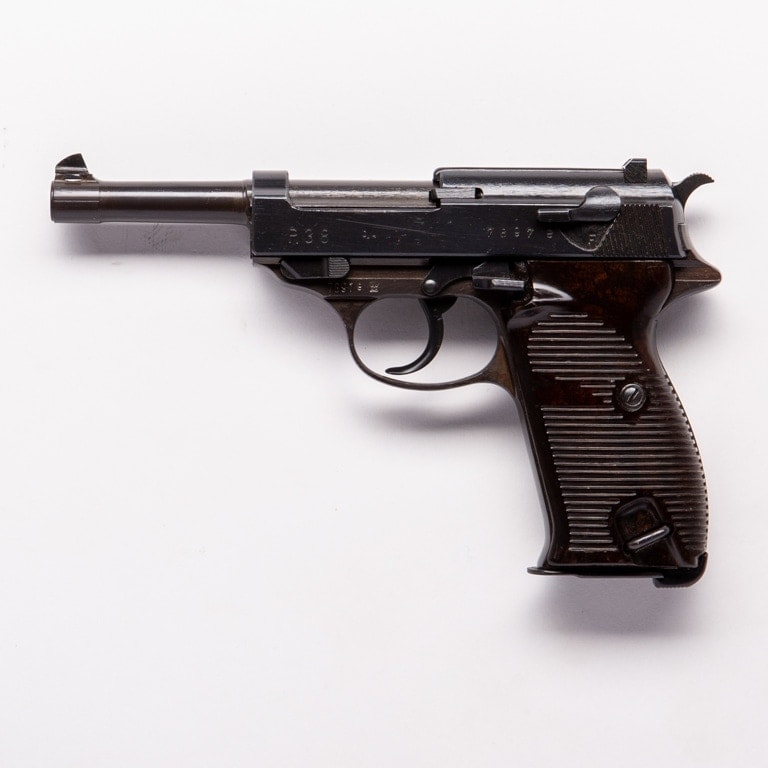 This Spreewerk-made P38 is also in our Vault, looking for a forever home.

Once the war ended, a new chapter in the P-38’s history began. Surplus pistols circled the globe and were often used by European armies such as Norway and Hungary, rebuilding for the looming Cold War. The single-stack 9mm popped up extensively in conflicts from Africa to Central America and Vietnam, supplied by those on both sides of the Iron Curtain from captured stockpiles. Today, Russia still reportedly had warehouses full of them, locked away just in case. 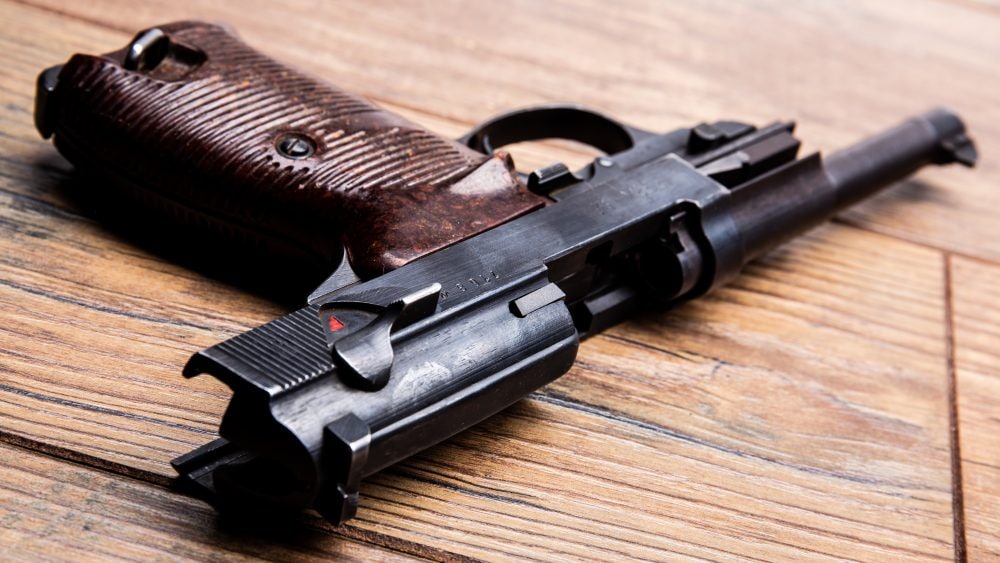 The P38 was so influential in modern combat handgun design that it’s almost impossible to talk about the subject without mentioning it. If you have only ever handled the Berettas, Sigs, and Smith & Wessons of today, then get introduced to a P38, chances are great that it will seem uncannily familiar, natural and comfortable. All these guns often borrowed the double-action/single action trigger, take down lever, sights, and general mechanics of the P38.

The Walther gun itself was outright copied in Croatia as the PHP pistol and it can be argued that the Beretta 51 and later 92-series of handguns are nothing but a P38 with a full-length slide and frame.

When it comes to post-war production, the French firm of Manurhin inherited Mauser’s wartime machinery and cranked out P-38s in a distinctive “ghost grey” parkerized finish from years, many of which were sent to fight the Viet Minh in Indochina. The company went on to make guns for the West Berlin police as well.

Meanwhile, Carl Walther set up a new factory in Ulm, West Germany and began making a second generation of the war-proven pistol. Chambered in either 7.65 Luger or 9mm, Walther’s new P1 used a steel slide and barrel on a redesigned alloy frame with black plastic grips. The gun was soon adopted by the new West German military, the Bundeswehr, after 1955, and by various police forces across the republic. 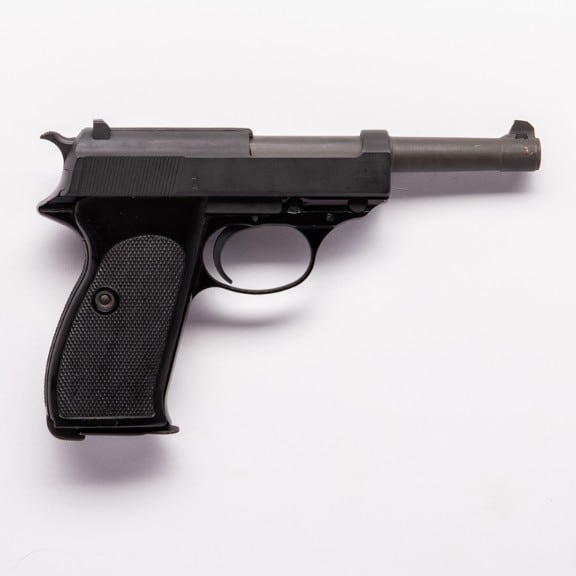 The P-1, often still roll marked P-38 on the slide, were used by German military and police forces throughout the Cold War and only retired from service in 2005. Several are available in the Guns.com Vault for about half the price of wartime P-38s.

The German Bundeswehr eventually replaced the P1 with the P8, a modified version of the polymer-framed Heckler & Koch USP, in 2004. Several thousand surplus guns were given as military aid to NATO allies such as Lithuania and Estonia and in nation-building assistance to post-Taliban Afghanistan, post-Yugoslav North Macedonia, and post-Saddam Iraq, where they will no doubt soldier on for years. It is safe to say the last serviceman to use a P-38 hasn’t been born yet.

Today, NATO-allied Portugal still actively fields the P-38, as they have for more than a half-century. Not just a peacetime army, the Portugese fought a series of brutal African bush wars in Angola, Guinea, and Mozambique (as in the Mozambique Drill, Mozambique) throughout the 1960s and 70s, and the Walther was there. 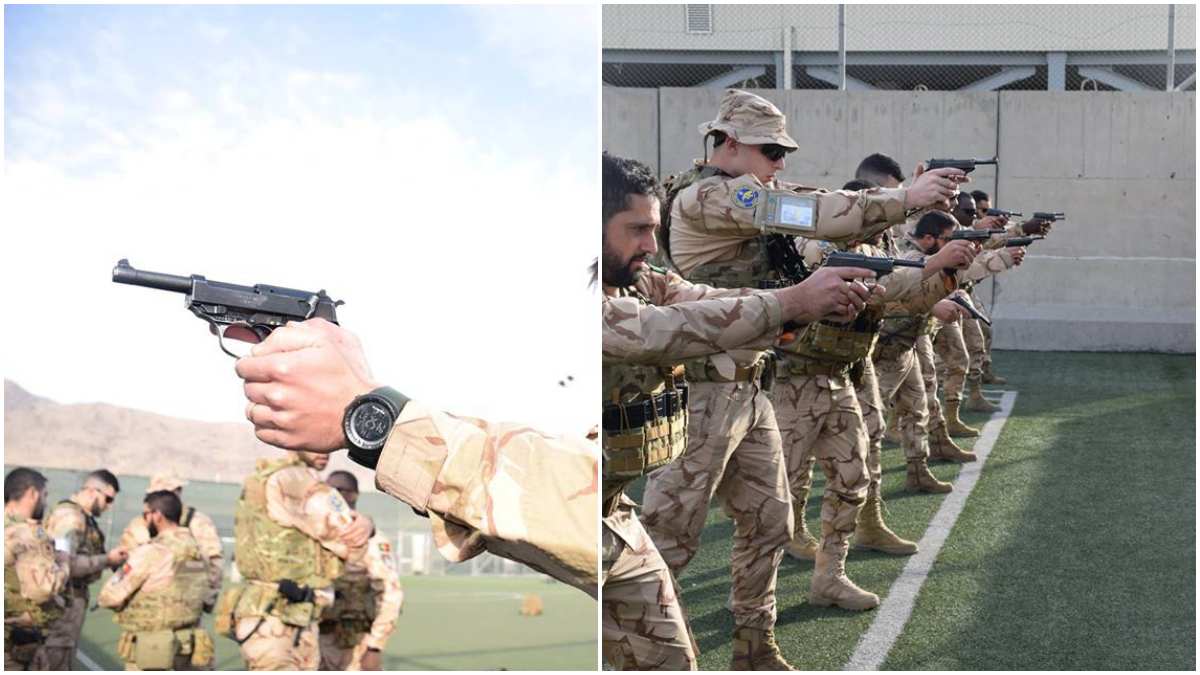 The Portuguese military adopted Walther P38 as the M961 in the 1960s to replace the Luger P08, and it is still in use with that country today. (Photos: Portuguese Army)

As for Walther, they closed out the P-38 line in the late 1970s/early 1980s with the P4, which was essentially a P1 with a reinforcing hex bolt in the frame, simplified decocking lever, and a 4.5-inch barrel. 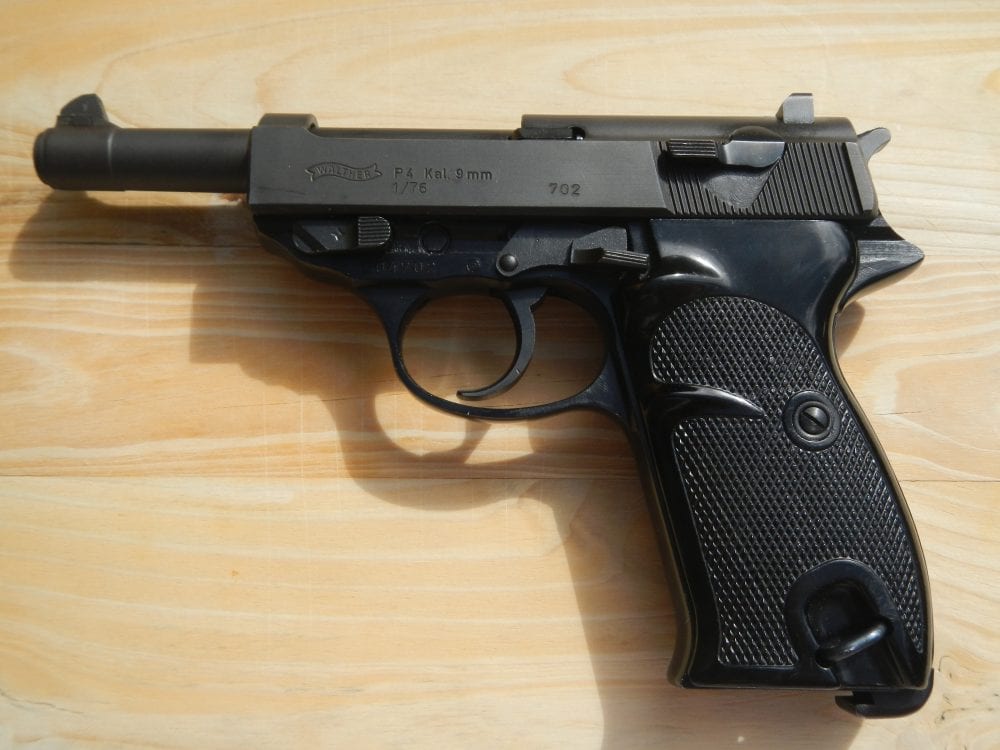 This Walther P-38/P4 police issue gun was made in 1976 note the black plastic pebbled grips, reinforcing bolt in the frame, and shorter barrel (Photo: Chris Eger/Guns.com)

No matter what model you pick up though, any P-38 is sure to be a prized collectible for generations to come.