With so many gun models available, selecting the right pistol to add to your growing collection or buying a handgun for the first time can feel like a daunting task. With the right know-how, though, the buying process can be a little less intimidating and, dare we say, fun!

Here at Guns.com, we’re all about setting our readers up for success so we sat down with Mark Sims, Senior Buyer at Guns.com, to get some tips on how to buy a handgun.

Handguns span a wide array of uses these days, so knowing what you want out of your handgun narrows the options down, ultimately making the buying list a little more manageable. From plinking to hunting to competitive shooting and even self-defense, handguns bring versatility.

“Pistol shooting is an absolutely fantastic sport to get into. There’s a lot of enjoyment. It requires multiple levels of skill depending on how serious you want to go with it,” Sims explained. “You can just go out plinking with your friends and family or you could actually get into any level of competition — be it at your local gun range, on a national level, or all the way through the Olympics. It’s not any more expensive than any other sport.”

The Ruger Super Blackhawk Hunter is a revolver that can be used to hunt larger game.

Sims added that handguns can also be used for hunting, with the success dependent on caliber. “Handgun hunters hunt vermin with a .22 all the way up to bears with a .500 S&W but of course choice of caliber plays an important role in hunting.”

Another element to the pistol game is that of self-defense. Many first-time gun buyers opt for handguns as their means of personal protection on the go and in the home. Understanding how your handgun plays into your plan also helps narrow down gun makes and models.

“If you’re in a life-threatening situation — yourself, family or your friends — then a handgun can add that extra blanket of security,” Sims said.

Finally, it’s imperative to check local and state laws regarding gun ownership. Some states place restrictions on what kind of pistols residents can own. Knowing your local ordinances will keep you out of trouble and will make the buying process easier.

2. HEAD TO THE RANGE

Browsing online is a great way to develop a list of potential guns, but there’s nothing quite like holding the gun and testing it out. Much like a test drive on a new car, potential gun owners should head down to their local range and take a few gun models for a test run. Renting various guns, test firing, and getting a feel for the gun’s controls will let buyers get a grasp on whether the guns they’re interested in are right for them.

“You never know until you actually are able to use the gun whether you’re going to enjoy it or not and it needs to be enjoyable. The best way to get that information is by contacting your local gun range and trying before you buy,” Sims said. “So many guns look great and feel great until you actually use them and then you’re surprised by how they operate.”

Friends are also a great resource so link up with some buddies and head to the range to try out some of their favorite models and suggestions. If you’re new to guns and a little nervous to try your hand at a buddy’s bigger caliber like 9mm or .45 ACP, Sims suggests stepping down to .22 LR. The smaller caliber helps new shooters become accustomed to recoil and the gun’s fundamentals. 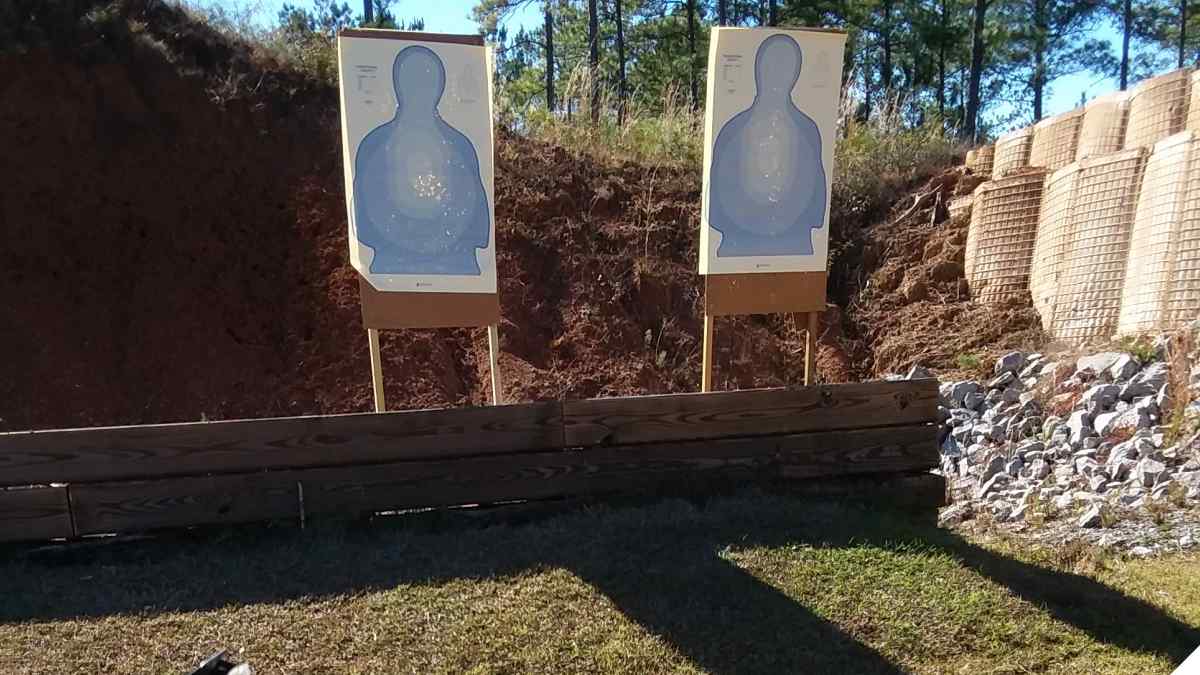 Landing shots on target at the range will help you decide whether the guns you’re interested in are right for you.  (Photo: Chris Eger/Guns.com)

When buying a gun the question always arises, should I buy new or used? Though both have its merits, used guns often come with a few more perks to include a better price and sometimes more accessories. Often times, the term “used” conjures up images of broken-in, dirty guns but Sims says that’s often not the case.

“There are a phenomenal numbers of high quality used firearms out there that people went down that path of buying a pistol they thought they would enjoy and now they don’t. They’re trading it in the hopes someone out there will enjoy it more,” said Sims. “There are like new condition used handguns out there that you could save an average of 20-percent on buying preowned from somewhere like Guns.com.”

Additionally, used handguns also frequently come with the added benefit of accessories. Sims says he’s seen his fair share of used guns come into the Guns.com vault with accessories like extra magazines, holsters, upgraded triggers and sights, stippled grips and even optics. Opting for a high-quality used model handgun often times is a better choice for budget-minded buyers or those looking for more bang for their buck.

First-time buyers should be wary to avoid common pitfalls when purchasing a first handgun. Namely, stay away from teeny-tiny pocket pistols and handguns. These often don’t offer as much comfort when shooting and they tend to come with significantly more recoil than their mid-size and larger pistol siblings.

“Those pocket pistols are designed to be exactly that — a concealed carry gun that you test fire every once in a while and use if you need to in a face-to-face situation,” Sims said. “The smaller the gun the more difficult it is to shoot in both accuracy and control. For first time buyers, I would recommend a plinking category gun that is a midsize handgun, low recoil, easy to shoot and operate.”

After selecting a pistol, especially if it is used, make sure to get it evaluated by a gunsmith or professional. Going to someone with expertise will ensure the gun is in good working condition and you don’t end up with a lemon.

“At Guns.com, we do a full inspection and certification on all preowned guns that come in, so you can feel confident that you are getting a firearm that’s operating properly,” Sims offered. “You need to have someone with gunsmithing skills like that available to look at the handgun, much like you would have a mechanic look at a used car before buying it. So if you’re not buying it from somebody like Guns.com, you need to find someone who really knows what they’re looking at.”

After you’ve put in the research both on and off the range, narrowed down your selections and circled that one model on your list that fits your needs and budget it’s time to buy (and Guns.com makes the process gunbelivably easy right here - online). Whether purchasing new or used, do your homework and check prices. Make sure you know what all comes with the pistol package and what you might need to invest it to get the gun set-up the way you want it. Once that’s complete, fill out that paperwork and bring that gun home.

Remember, that responsible gun ownership doesn’t stop with just buying a handgun. It’s worth it to invest in training to become proficient with the new pistol.