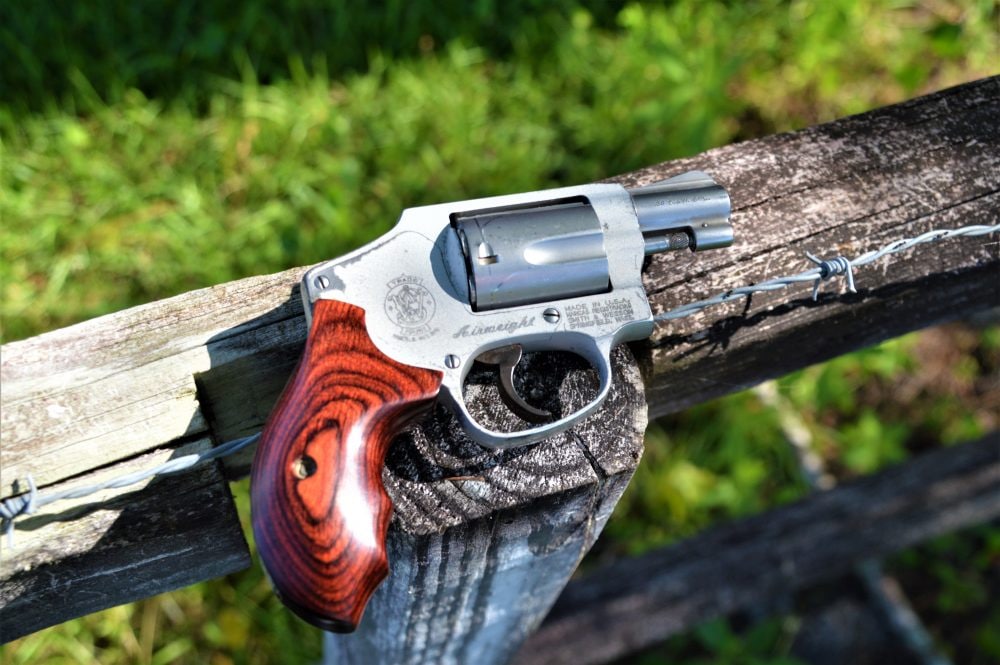 After several thousand rounds or so pushed through it over the years and two decades of carry, this early S&W 642-1 is still kicking. For that time when the clock stops, Smith has a lifetime service policy. (Photos: Chris Eger/Guns.com)

For those situations where a more full-sized gun isn’t on the schedule, this Smith & Wesson Model 642 Airweight has often tagged along, especially in hot summer months.

The original S&W 642 was introduced in 1990 as an update to the company’s 1950’s era aluminum-framed Model 42. A double-action-only 5-shot .38 Special with a snag-free fully concealed hammer, the 642 in most cases sports a 1 7/8-inch (some 2-, 2.5- and 3- inch models are floating around) stainless steel barrel and cylinder along with a matte-finished alloy frame.

Weight, unloaded, is 15-ounces flat while overall length is 6.3-inches and ties with its matte black brother, the S&W 442, as the company’s smallest .38. By comparison, Ruger’s LCR— which was introduced in 2009 with the same cylinder capacity as the Smith but with a polymer frame– weighs 13.5-ounces while going a tad longer, showing just how svelte the 642 is. Also, of note, the 642 is the same overall length as the Glock G43 while running a few ounces lighter, but that is a more apple to oranges comparison. 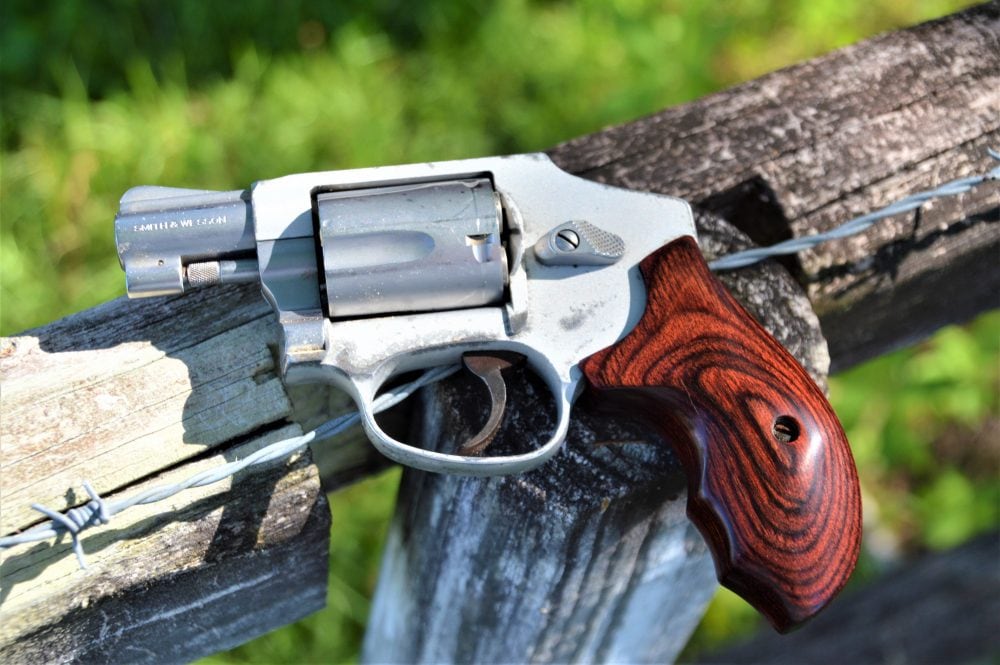 This 642-1 is a “no hole” gun, without the later trigger safety lock that Smith installed. Rather than the original rubber boot, it now sports Altamont Combat Super rosewood grips for a little extra purchase in my mitts.

My personal 642-1 was born on Feb. 7, 1997 (Smith can help you with the born-on date of your own gun) and I picked it up very soon afterward. As I was in law enforcement at the time, I often carried it as a back-up weapon both on and off duty. While these days I have long ago hung up a badge and typically EDC a compact 9mm double stack, the 642 still occasionally hangs out as a BUG but is more often used in terms of a quick “take along” during the hot summer months. 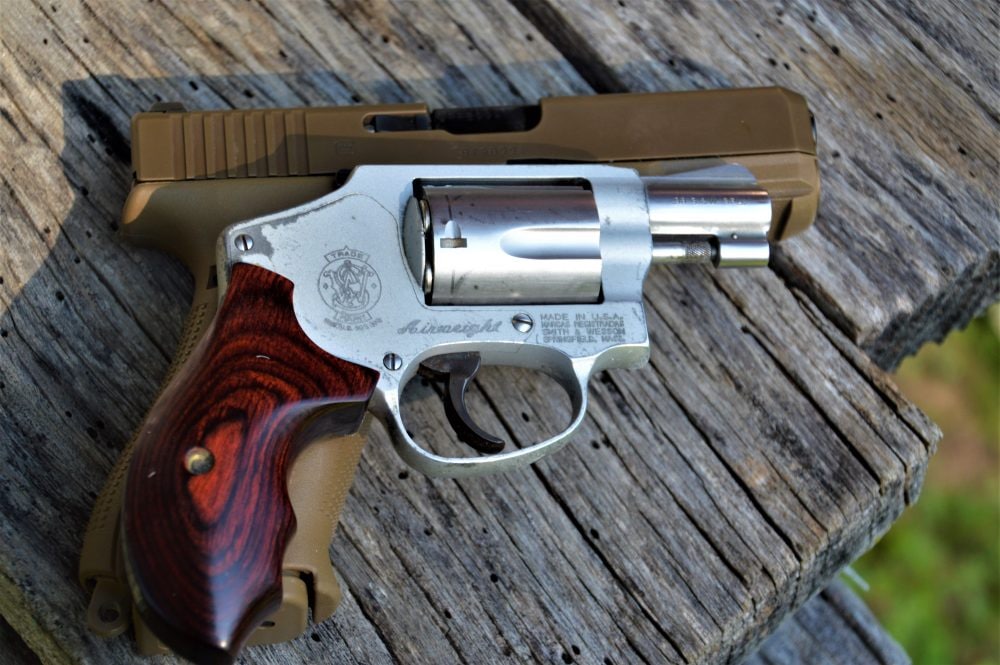 The 642 compared to a G19X. Sure, accuracy past 15 yards with the snub is not as tight as with a more full-sized handgun with a nice long sight radius, but I can still keep it center mass out to 25– and with a little practice so can anyone. Plus, keep in mind the more likely envelope for a snub encounter is in the 3 to 7-yard range.

I live in the Gulf South, where 90 percent humidity and 90-degree temperatures are as common as Ford F-150s and fried shrimp for about seven months a year. This means T-shirts, shorts and flip flops as the uniform of the common man– and that’s when people get dressy. Beach towns are even worse. This means either wearing more clothes than the common man and being both uncomfortable and out of place or decreasing the EDC to match the wardrobe at the crawfish boil, fireworks show or fishing tournament. That’s where the 642 is gold and gets to come out of the safe. Tucked in a slim IWB holster, printing is not an issue and you aren’t going to find it without either a magnetometer or an inappropriately intimate pat-down. Light enough to carry all day, it is there if you need it without bugging you when you don’t. 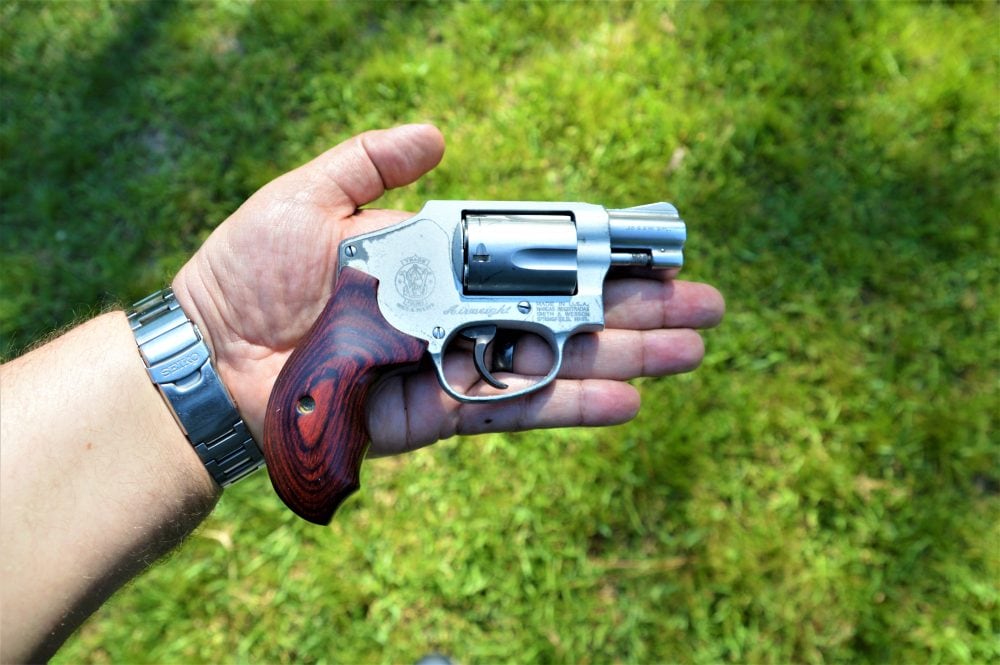 The 642 is palm sized, in most palms, and conceals exceptionally well.

Another thing the 642 excels at is in activities that aren’t just summer-related, such as going to the gym, taking a rural walk in bayou territory that has its share of alligators, coyotes and water moccasins; working in the yard, or just heading to the store while wearing your running shorts. Due to its size, it makes a good pocket gun and a variety of holsters can help with the presentation of that. For such carry, a Mika Pocket Holster has been there for me for years without complaint. I’m just not a real big fan of pocket carry. 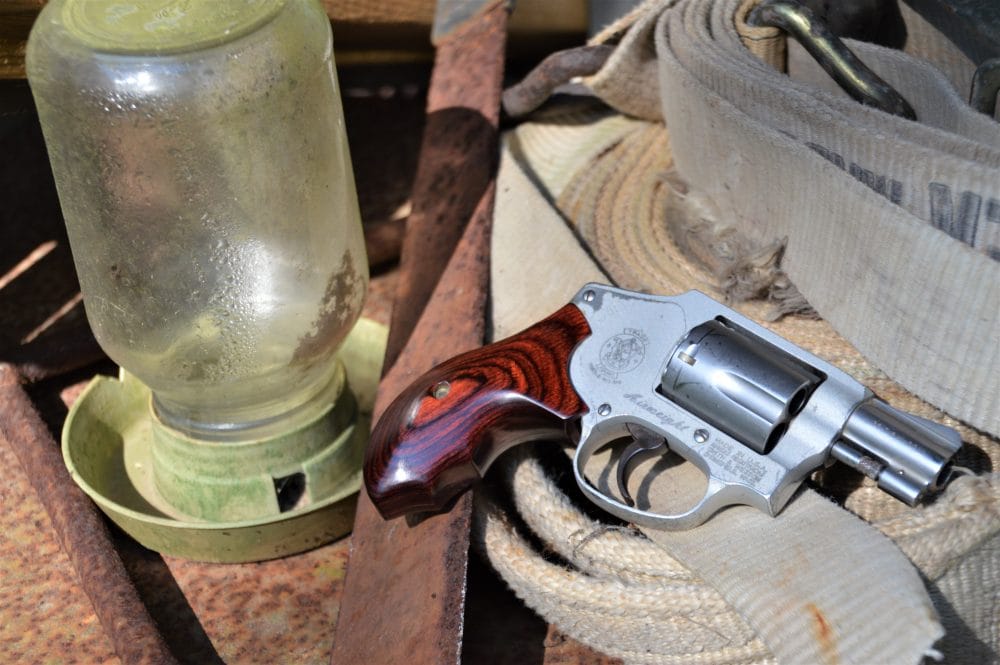 With my typical summer including cutting grass, working a respectable home garden, and taking care of two horses, the 642 also has the bonus of being an easy gun to tote around the homestead.

I prefer IWB using an old school and inexpensive Bianchi No. 6. I’ve used Galco’s Speed Paddle and other designs in the past and usually go Kydex for my semi-autos, but the “suede six” is super thin, which reduces bulk, and it rides high within the body which for me helps to produce a very quick draw stroke. Like by the time you can say, “alligator,” I am out and ready. On the downside, the thin body construction makes quick reholstering unlikely, but I have never been to a training class that ran a penalty clock on your reholster.

Speaking of training, if you get a snub, consider attending a specialized course in their use. There are several floating around. These stumpy wheel guns are not just for the grey-haired and cigar-chomping crowd, and they have never gone out of style. For those interested in snub sub-culture, check out the I’m with Roscoe club and take a dive. 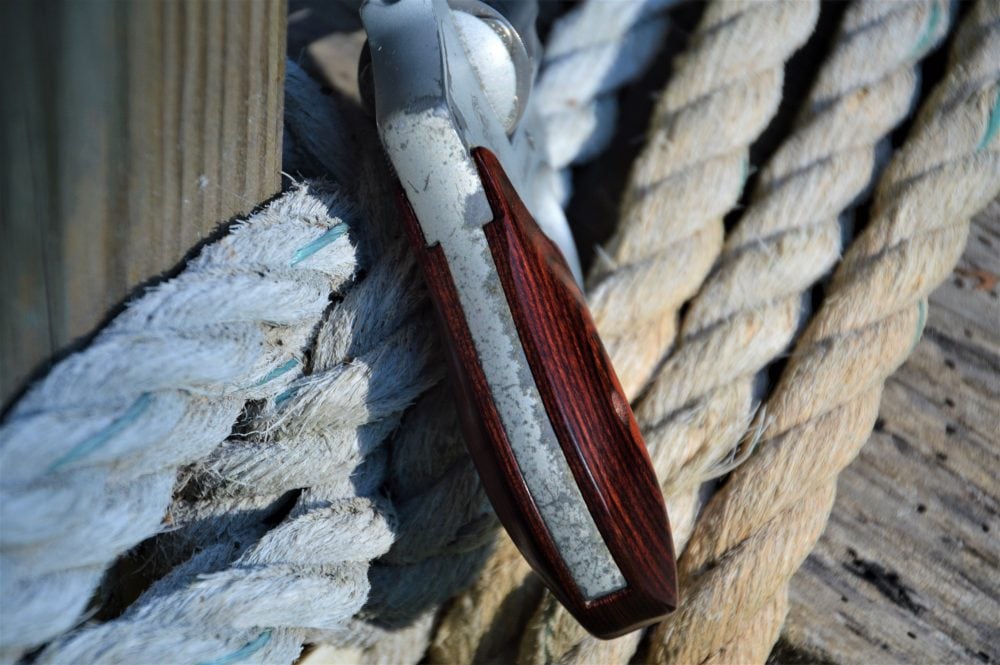 While the exposed backstrap helps provide a slim grip profile it also offers a wear spot when carried extensively. This finish wear on the alloy frame came from some 20 years of hard service but the gun still functions fine.

Of course, the 642– and any snub for that matter– is not perfect. These guns are not forgiving if you fail to learn how to use them. They are often a difficult gun for beginning shooters due to their harsh perceived recoil, especially with +P loads. Their DAO trigger has a heavy pull– — those who carry DA/SA snubs are likely never going to be in a real situation where they use them in any way other than double action– which can work against the user if they slap rather than press the trigger. Home practice with a cleared weapon, snap caps and your carry holster can help with this immensely. For those with a recoil sensitivity, loads like Hornady’s Critical Defense Lite Ammunition dials it down to a more manageable level. Finally, hit the range regularly with your snubby and get that three-second draw to target down to two seconds or even one. Every shot counts no matter what you carry, but this is even more critical with a five-shot handgun that is slow to reload. 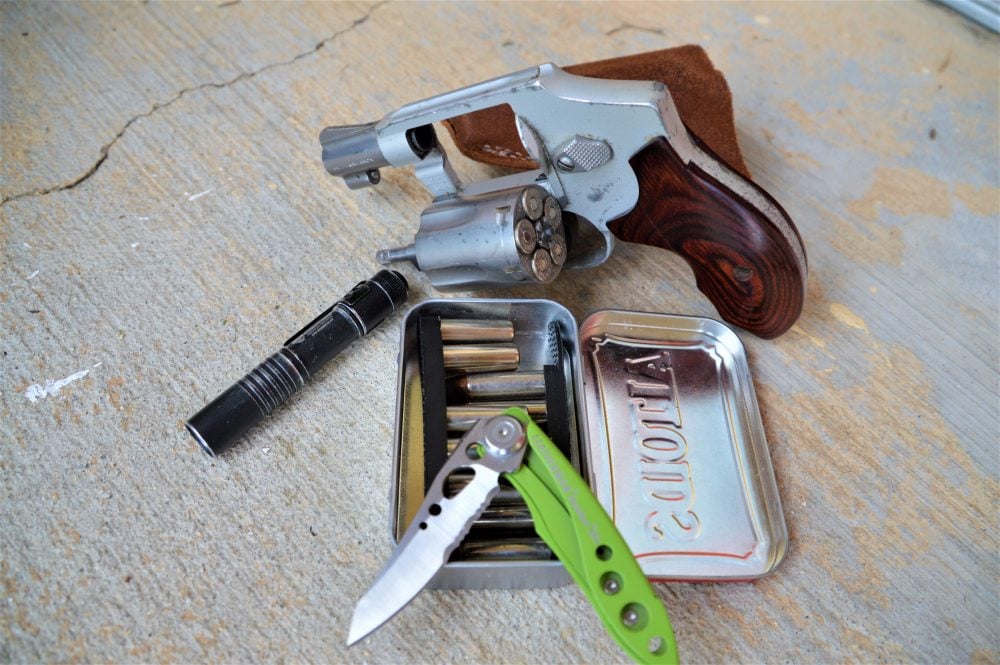 The 642 in a leather Bianchi #6 waistband holster loaded with five rounds of 130-grain Federal HST weighs 19.6-ounces walking out the door with deep concealment a reality. Optionally, you can add a pair of Bianchi Speed Strips with another 10 rounds loaded inside a repurposed Altoids tin along with a Streamlight Microstream and a pointy thing like the Leatherman Skeletool KBx multi-tool and you still come in at 29-ounces. That’s a well under 2-pound summer carry, all day.

Speaking of which, snubs, due to their low cylinder capacity, shouldn’t be your first choice for going into high-risk situations. While a variety of reload options are out there, such as speed loaders and strips, they are still relatively slow even with practice. These revolvers are more of a “get off me” kind of gun when presented with an unexpected physical attack. In that situation, the 642 and similar concealed-hammer small frame have a nice rear profile coming out of the pocket or from a deep concealment holster– something that semi-autos typically don’t. Plus, you aren’t going to accidentally eject a magazine.

In short, the 642 is a great little gun that can be there for you when others aren’t, which is super important some times. While mine isn’t for sale, we do have others, both new and Certified used, in the Guns.com Vault starting at $275.