GRAB A RUGER WRANGLER RIMFIRE FROM GUNS.COM
Over 65-years ago, Sturm, Ruger & Company revived the nearly departed single-action rimfire platform with the Single Six revolver. Today, they’re making that same six-shootin’ design accessible to the masses with the most affordable wheelgun ever. Built in America for blue-collar Americans, the new Ruger Wrangler stirs nostalgic dreams of western flicks and gunslingers.

Rustlin’ Up the Numbers on the Wrangler

It’s seldom appropriate to lead with the price of a firearm ahead of specs, but in the case of the new Wrangler, cost is what immediately catches the eye. With an MSRP of only $249 and real-world prices as low as $179 online, the single-action six-gun appeals immediately to a budget-conscious rimfire market.

What exactly do plinkers get for that price? The Wrangler is chambered only in .22 Long Rife at this time, but it wouldn’t surprise me to see a .22 WMR cylinder in the near future. The 4.62-inch cold hammer-forged barrel is of solid steel.  Overall length is a wieldy 10.25-inches. Sights are basic, with a blade front and integral notch rear.

A transfer bar safety allows shooters to safely carry a full six rounds with the hammer resting on a loaded chamber. The trio of Cerakote finishes make Wrangler revolvers instantly recognizable, with Black, Silver, and Burnt Bronze options. Each wears the same blued, unfluted steel cylinder with dual-line detail. The black checkered synthetic grips are basic, yet allow for customization. Best of all, the guns are made in the USA in Newport, New Hampshire.

It is impossible to discuss the new Wrangler without acknowledging its roots. It begins with the beloved old Ruger Single Six design, which remains in production today. Although nearly identical at first glance, the price is very different. The Single Six carries an MSRP over six bills while the Wrangler can be had for roughly a third of the cost.

Surely that savings comes at a sacrifice, but what has been altered is not nearly as dramatic as some might like to believe. The major difference comes in metallurgy. While the Single Six is a solid steel wheelgun, the Wrangler makes use of aluminum alloy for the grip frame, cylinder frame, and ejector rod housing. Before commencing chest-clutching, realize that the cylinder itself, as well as the barrel and major internal parts, are still solid steel. 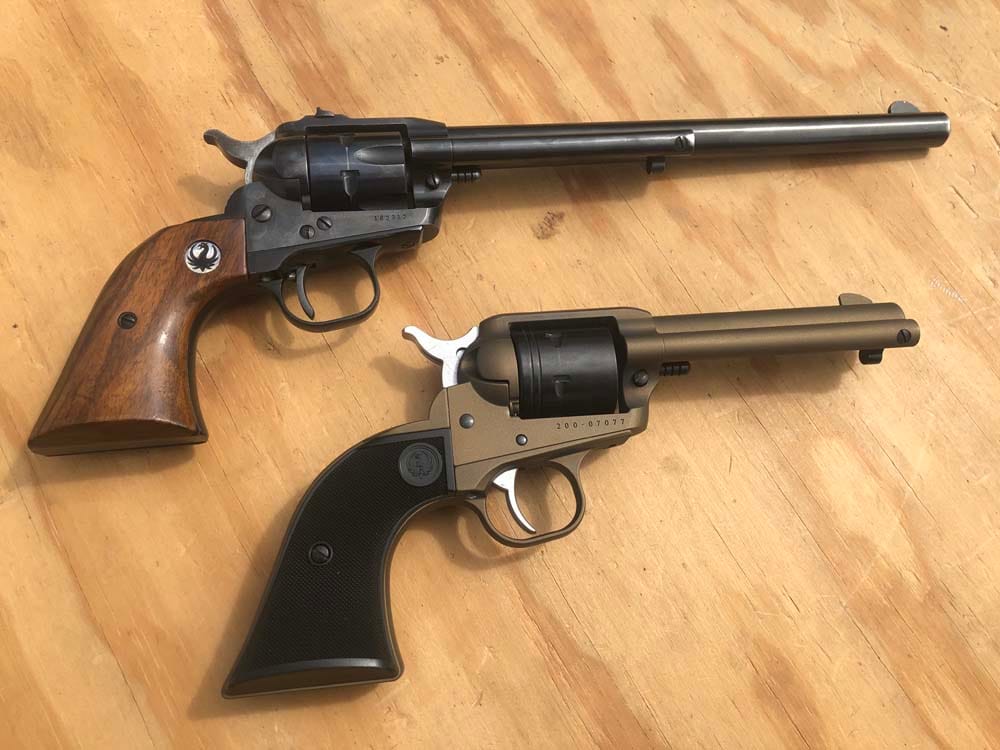 The Ruger Wrangler (bottom) shares much in common with the 65+ year old Single Six design but makes use of cost-effective savings including the aluminum alloy grip frame and cylinder frame. The barrel and cylinder remain solid steel, however. (Photo: Kristin Alberts/Guns.com)

Yet, there are also differences in the features. The sights taking a decent downgrade with the non-adjustable Wrangler, but they remain true to old fashioned SAA style notch and blade. Likewise, the hammer mechanism has been altered from the Single Six’s multi-position, half-cock style to the reversible pawl of the Wrangler, which spins at will with the loading gate open and the hammer at rest.

Making no bones about it, the feel, smoothness of action, and features when compared to my early model Single Six buntline has no match, however, neither does the price. While experienced shooters will be quick to point out the Wrangler’s shortcomings when compared directly with the Single Six, it is most important to note that these are similar revolvers but with very different price points and intended target markets. The bottom line is Ruger’s track record of quality and customer service follows both for life and either rimfire will do well by an informed buyer selecting that which best suits their needs.

Wrangler’s Sweet Spot on the Market

Besides the obvious comparison with the big-brother Single Six models, Ruger’s Wrangler also bears mentioning with the other major player in the budget rimfire market: the Heritage Rough Rider. Both will be competing for a similar space in the sub-$200 real-world-priced single action six shooters. Both make use of modern technologies and alloys to save both weight and cost, while still achieving the intended purpose. Shooters buying cost-effective rimfires like these accept they’re not getting the greater attention to detail and build specs of a $500-$600 piece, but that does not mean either is a hunk of junk, as naysayers oft suggest. Quite to the contrary, in fact.

My test Wrangler is the Burnt Bronze Cerakote iteration. Not only did I find the appearance attractive, but the Cerakote held up very well to almost 500 rounds of ammunition and multiple cleanings. Of note, the Ruger-branded synthetic grips are the same style used on the later-model Single Six grip frame. Known as the XR3-RED, these stocks are also the same ones used on Blackhawk revolvers as well as the Single Seven, Single Nine, and Single Ten, so users can easily upgrade their Wrangler grips to any number of aftermarket styles. 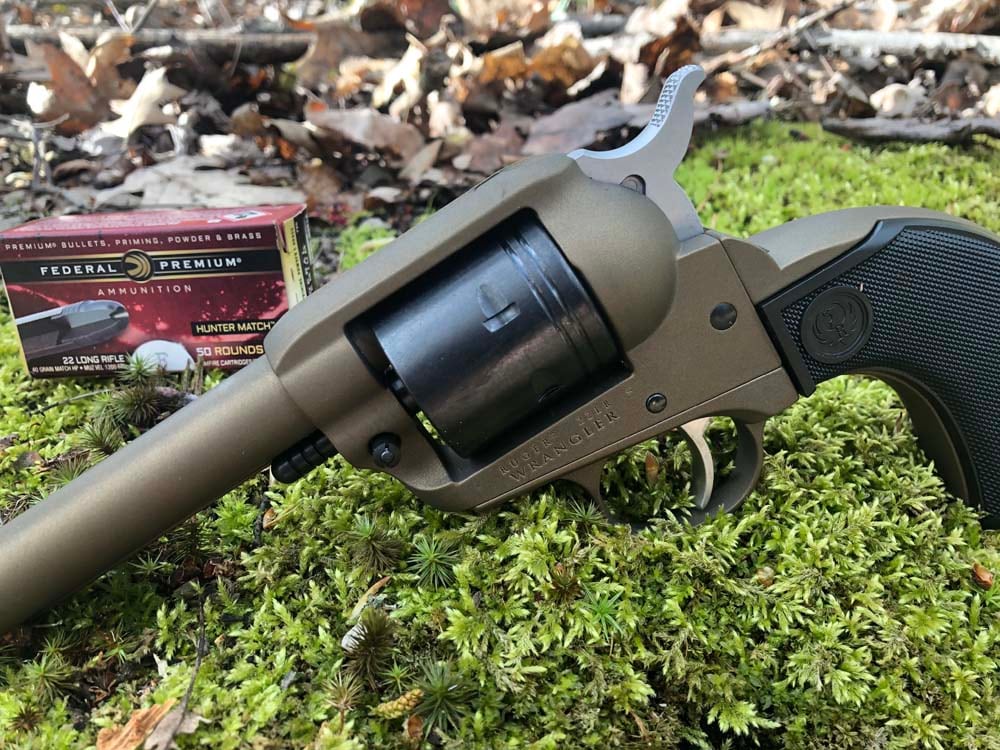 Our test Wrangler wears the Burnt Bronze Cerakote finish along with the blued steel cylinder, all in all a very attractive and affordable six-shooter. (Photo: Kristin Alberts/Guns.com)

With a weight of 30-ounces unloaded, the Wrangler has the feel of a well-built single action rimfire while also using aluminum alloy in the non-critical areas. It fits pleasingly in the hand and on pure feel alone, is difficult to discern from the Single Six frame, though the use of aluminum does shave a bit of heft. The free-spinning pawl is a welcome addition, allowing the cylinder to rotate in either direction, making it a breeze to both load the cylinder and clear spent casings. Tolerances are surprisingly snug on a budget gun, and even after hundreds of rounds and less than gentle handling, the Wrangler locks up just as tightly as it did right out of the box.

I gathered up a nice mess of rimfire ammunition, from bulk plinking rounds to hunting and even match grade, including offerings from Aguila, Federal Premium, and Winchester.  One of the most important factors with any gun is dependability and in that area, the Wrangler performed just as expected. It ran though all brands of ammo with complete reliability.

The test gun’s trigger broke right about 4 pounds. While it’s no target gun, it was never meant as such.  Firing from a rest at 25 yards, the Wrangler averaged half-inch to 2-inch groups. Shooters more practiced with basic irons could surely improve upon those numbers, and individual shooters will do well to familiarize themselves with the simple sights. It is important to note that Ruger has set the sights to allow shooters to grind down the front blade as needed for elevation adjustments. Even shooting offhand, ringing steel on the range was a treat. 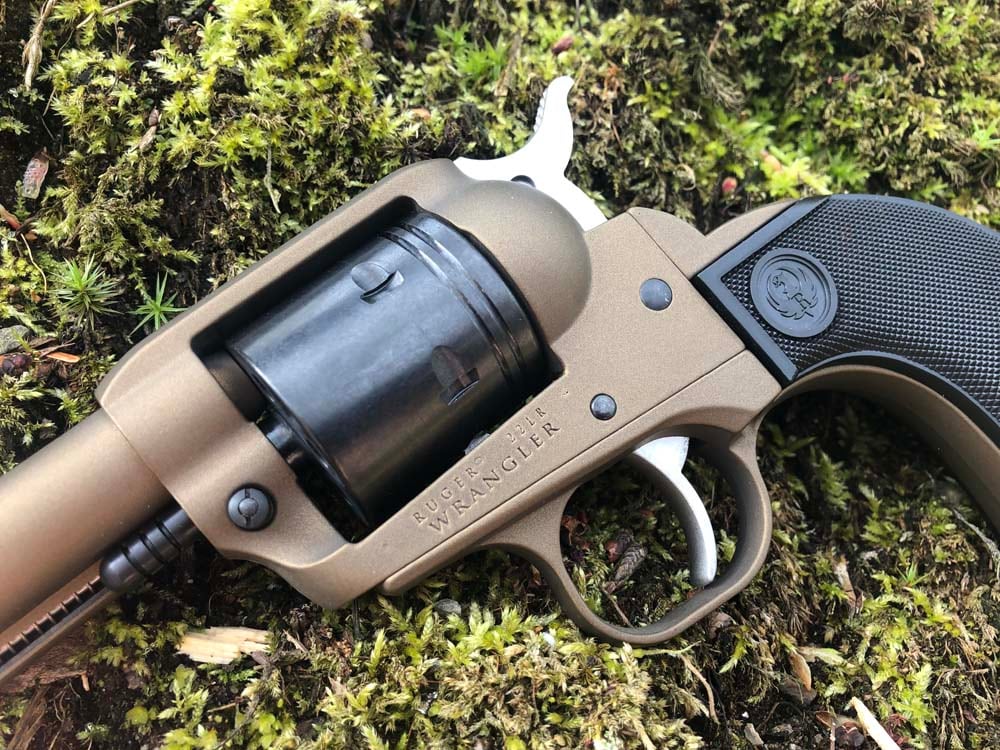 The Burnt Bronze Cerakote on our test Wrangler is not only attractive but held up well to extensive firing and cleaning. The six-shooter is also offered in Black or Silver Cerakote. The steel cylinder is blued regardless of other finish choices. (Photo: Kristin Alberts/Guns.com)

Though I would be pleased to see a WMR cylinder soon to follow, the current rig will work for .22 Short, Long, shotshells, and CB caps in addition to standard Long Rifle, making it an affordable do-all workhorse for the farmyard, trapline, backwoods camp, or just the plinking range.

With more big-name companies positioning themselves in the cost-conscious market space, Ruger was smart to join the rimfire fray. Their new Wrangler, while not in direct competition with the higher-end Single Six, offers shooters on a budget an accessible entry point into an American-made Ruger single action. Whether for knocking down tin cans on the range, hunting, or pure utilitarian tasks around the home, the Wrangler will find a welcome home with nostalgic western fans and rimfire aficionados alike.

For the Ruger Wrangler and other great firearms, check out the Guns.com Vault and collection of Certified Used Guns.