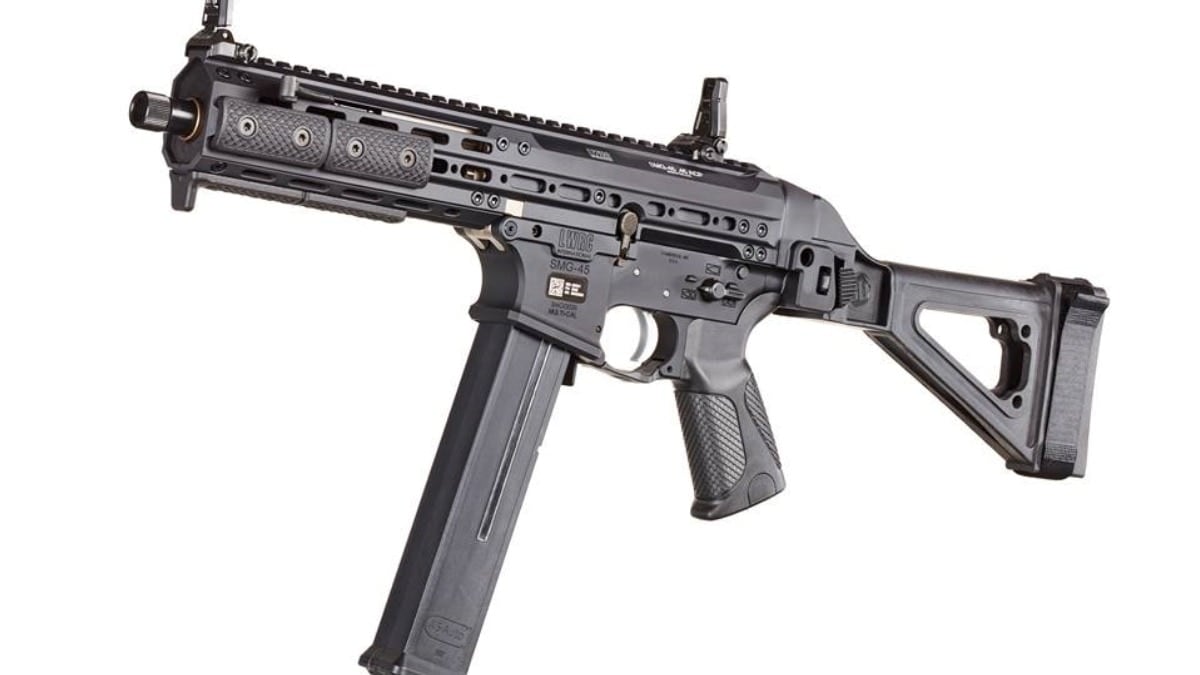 The first installment in a series that will blossom into a line of pistol caliber carbines and full-on sub gun offerings, the new SMG-45 is a braced pistol in its current version. (Photo: LWRCI)

Cambridge, Maryland-based LWRC International has debuted their first pistol caliber platform, the SMG-45, which is billed as a “step-up” compared to the competition.

Teased off and on over the past several years in one form or another, the SMG series is vaporware no more as LWRCI says the first batch of .45ACP caliber pistol brace production models shipped earlier this month to distributors. While it outwardly resembles an HK UMP — and uses UMP-style mags — the SMG model is in fact built on an AR platform while using LWRCI’s own in-house short recoil/delayed blowback operating system. 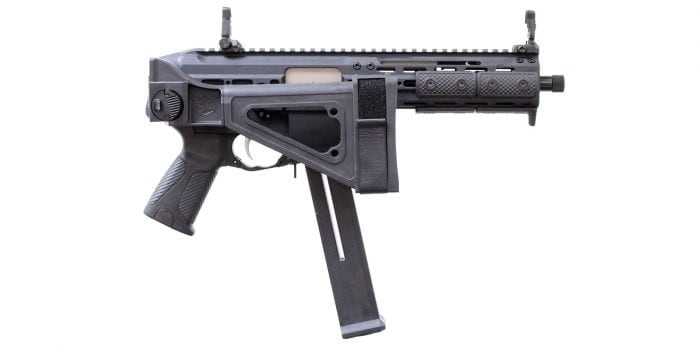 With the brace folded, the overall length of the SMG-45 is just 15.3 inches. By comparison, the Micro Draco AK -style pistol is about the same size without a brace (Photo: LWRCI)

“We listened closely to shooters, operators, and customers throughout the development of this exciting new platform for LWRCI,” said David Ridley, the company’s senior VP of sales and marketing. “The SMG is truly a ‘Step-Up’ pistol-caliber carbine that offers our customers innovative features and comfortable ergonomics in a compact package.”

A pistol equipped with the SB Tactical SBTi folding subgun brace and a 8.5-inch cold hammer-forged chromoly steel barrel, the initial version of the SMG-45 handgun compacts down to 15.3-inches with the brace in the stowed position. Overall length when the brace is extended is 26-inches. Weight is 5.9-pounds.

Features include Magpul MBUS pro sights and an extensive user-configurable rail system with Picatinny segments for sling adapters, rail panels and offset mounts at the 3, 6, and 9 o’clock position. The SMG-45 ships with a hand stop installed on the 6 o’clock rail– which is better than a standard forward grip considering recent BATFE guidelines. The surface controls are ambi with a paddle-style mag release while the non-reciprocating folding charging handle is reversible. 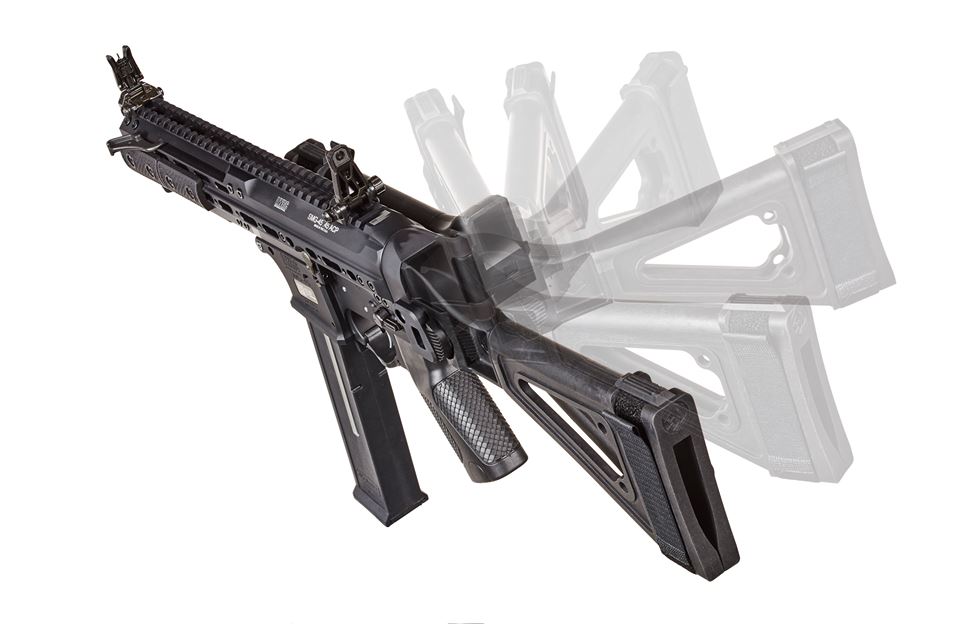 The company started off with the SMG as a select-fire sub gun for a military customer, but in an NFA-compliant model with a pistol brace, it makes an interesting handgun that screams for a Form 1 to go full-on SBR (Photo: LWRCI)

For those who are fans of quiet time, the muzzle is threaded (5 7/8″-28TPI RH pitch) and the SMG-45 can run a suppressor with a booster/Neilson device. A two-position semi-auto handgun, LWRCI says their new pistol is available with lower capacity magazines for local compliance in states behind the lines but otherwise ships with a pair of U.S-made 25-round UMP sticks. 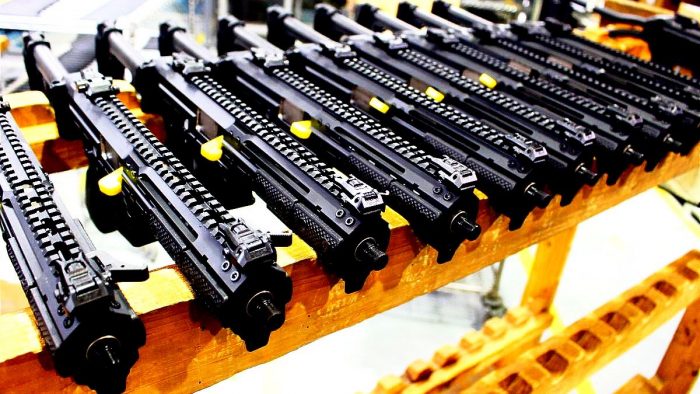 David Golladay, LWRCI’s marketing director, told Guns.com that the SMG, as its name would imply, originated as a select-fire submachine gun for a military customer, complete with a folding stock. This month’s NFA-compliant release doesn’t need a tax stamp and is pitched to the discerning gun owner as the first installment of a broader pistol caliber carbine series.

“Our rationale for launching this model first was to focus on a commercial market first with a compliant model for consumers,” explained Golladay. “We will be launching to LE and Government customers the same model with the folding rifle stock and continue to develop the other caliber options for both commercial and LE markets.” 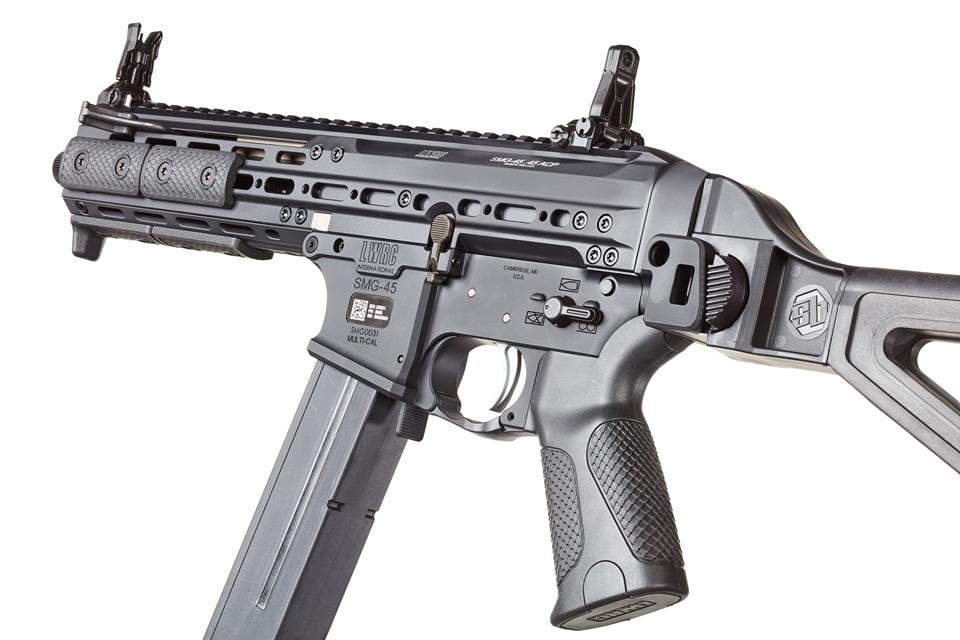