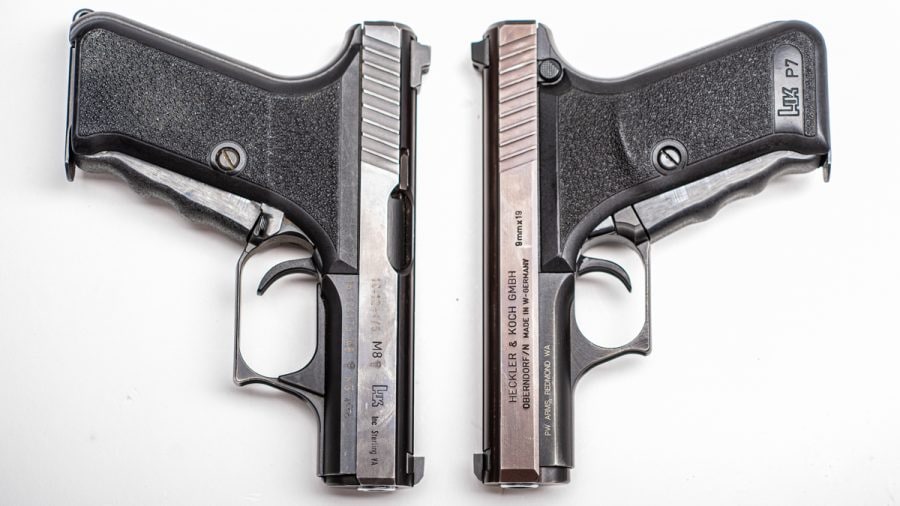 With its low-profile slide, innovative “squeeze-cocker” design, and reliable construction, the HK P7 PSP was a serious handgun for its era. (Photos: Richard Taylor/Guns.com)

Developed in the 1970s, Heckler & Koch’s P7 was billed as “the best combat pistol” on the market at the time and today is a solid collectible handgun.

Designed by Helmut Weldle — the same forward-thinking mind that helped craft the world’s first polymer pistol, the VP70, for HK — the semi-auto 9mm used a “squeeze-cocker” on the front of the grip, a concept he had recycled from an earlier handgun design that didn’t reach the market. This device cocked the internal striker of the pistol and gave it an exceptionally light single-action trigger. 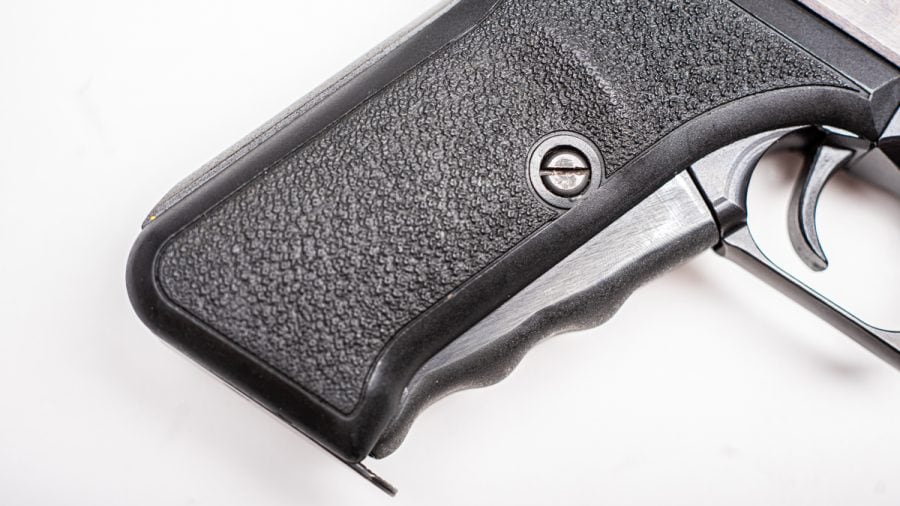 The cocking lever is engaged with the natural movement of a shooter’s grip, providing a single-action trigger pull with each shot, and re-engages when released. (Photo: Richard Taylor/Guns.com)

As it was designed for West German police use, it was dubbed the Polizei Selbstlade Pistole, or Police Self-loading Pistol, due to that feature. Falling in line with German police acceptance testing, it earned the P7 designation as it was introduced after the Walther P-1 (P38), P2 (SIG P210-4), P3 (Astra 600), P4 (P-38 IV), Walther P5, and P-6 (SIG P225).

With a fixed cold hammer-forged barrel and polygonal rifling, the all-steel P7 was accurate while the 110-degree grip angle was billed as being very natural. Reliable, the P7 was designed so that an empty case would extract and eject even if the extractor was missing from the handgun. Using a hybrid gas-delayed blowback, recoil was light. 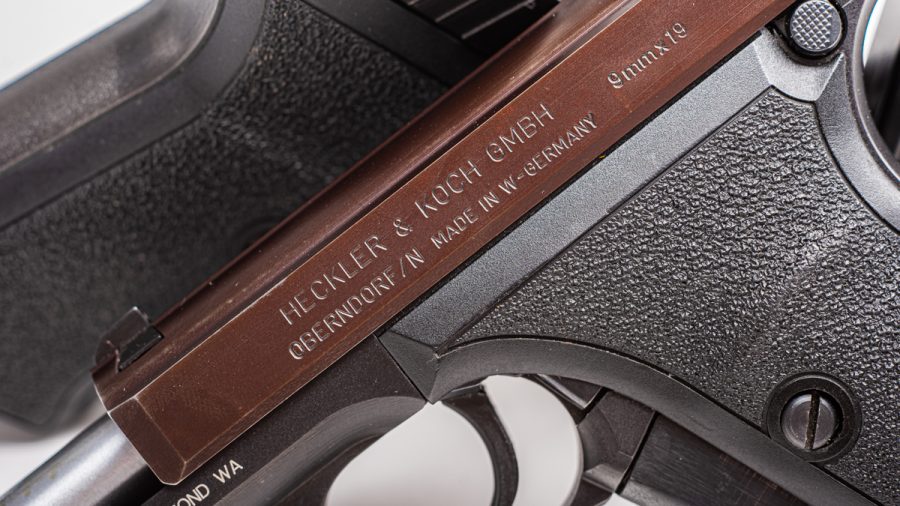 The thing is, cops in every country have a budget, even German ones, and the P7, while super neat, was kind of pricey when compared to the competition, a factor that meant it was only bought in small numbers. However, several German counter-terrorist teams (with larger budgets) adopted the HK PSP as did the German Army Special forces (KSK Kommando Spezialkräfte).

Speaking of pricey, when the guns were marketed in the U.S. with a corresponding American-style push-button magazine release rather than the European heel catch, they were marketed as “the most expensive handgun in the world,” with a list of the reasons why the P7 was superior to the more economical options. In the end, the HK squeezebox was only adopted by a few state police agencies, namely New Jersey and Utah.

One model, the P7A13, was even submitted to the U.S. Army’s XM9 9mm pistol trials in the 1980s to replace the M1911. While Beretta’s 92 series got the nod from the Pentagon in that case, HK did take advantage of those R&D Deutschmarks spent in the chase to field new variants of the P7 for the commercial market. 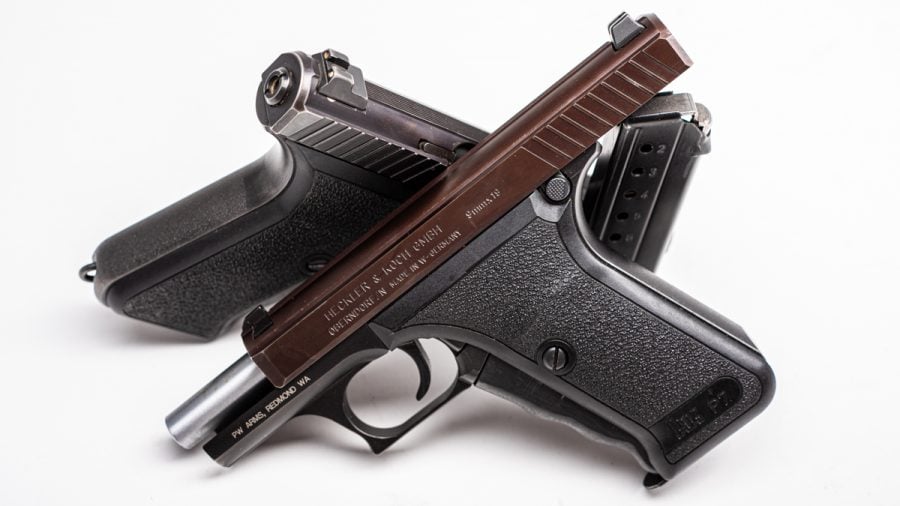 The P7, in turn, carved out a niche in with consumers as a handgun that would be chosen by the discerning gentleman, after all, HK at the same time was selling wood-stocked sporting rifles such as the HK 770. For instance, the fictional and independently wealthy detective Lucas Davenport, featured in John Sandford’s Prey series novels, carried a P7M13, the version of the pistol with a 13-round magazine, while fictional German terrorist-turned-crook Hans Gruber in Die Hard sported the same model but in a chrome finish. 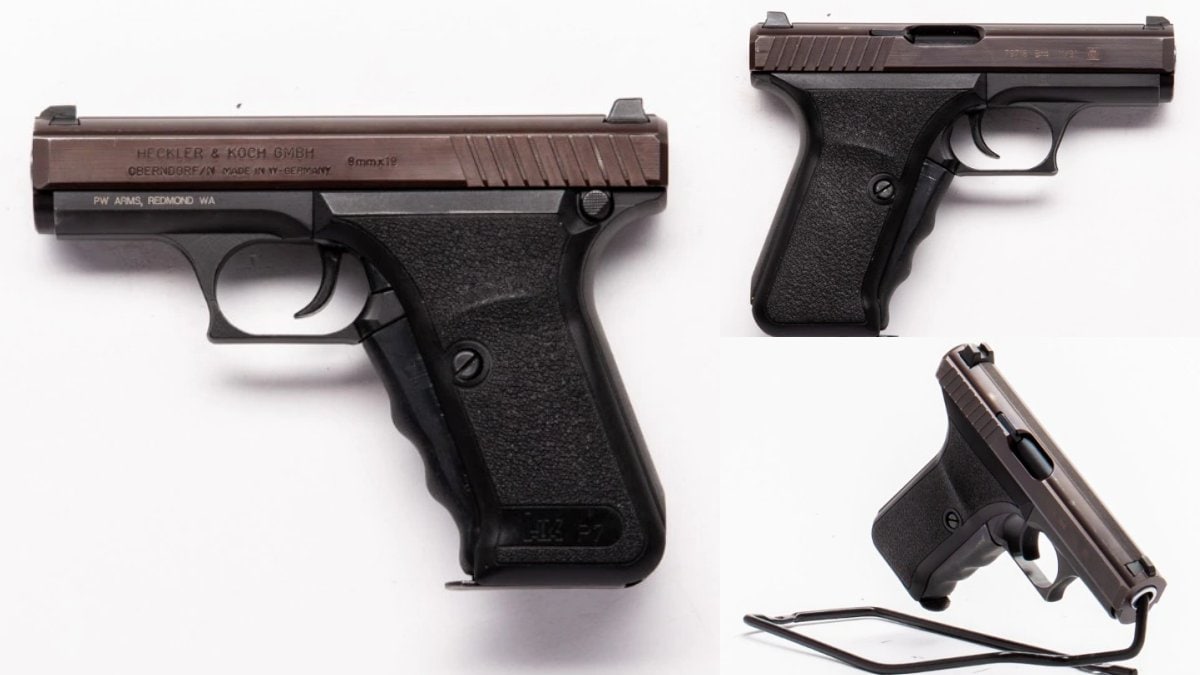 This HK P7 PSP with a five-digit serial number is “PW Arms Redmond, WA” import marked and was produced in West Germany in the early 1990s. Currently in the Guns.com Vault, it is looking for a forever home. 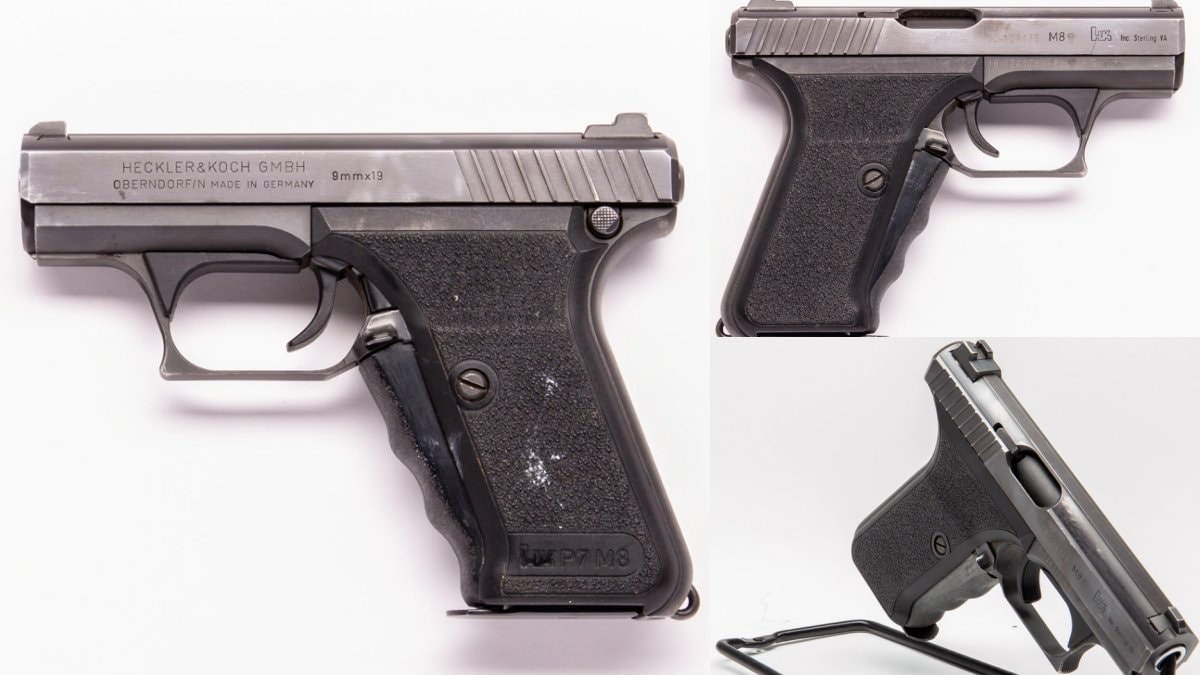 This HK P7M8 is a Sterling, Virginia-marked import produced in West Germany in the mid-1990s. Note the difference in the trigger guard which now has a heat shield, the improved rear sight, and grip from the P7 above. The gun also has an ambi magazine release just below the guard and a lanyard loop in place of the original PSP’s heel-mounted release.

Ultimately, the P7 series was retired by HK over a decade ago but you can be sure that the legacy of these patrician pistols will endure as long as Die Hard is considered a Christmas movie.