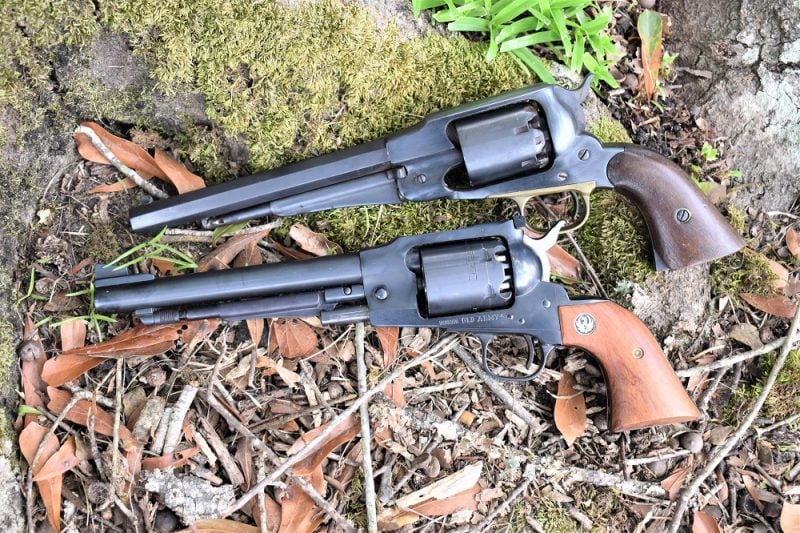 The top revolver is a circa 1865 martially-marked Remington New Army while the “identical cousin” below it is a 1999-produced Ruger Old Army. (Photo: Chris Eger/Guns.com)

While some argue that Sturm, Ruger’s Old Army cap-and-ball revolver is a modernization of the Civil War-era Remington New Army, they aren’t totally wrong.

In all, the Federal government contracted for no less than 18 different revolver types during the Civil War with the two most numerous being the six-shot Colt Army .44 (129,730 purchased) followed by Remington’s New Army (125,314) in the same caliber. This impressive number doesn’t take into account the thousands of handguns purchased by private soldiers and officers. The iconic Remington wheel gun had an 8-inch barrel and, unlike the Colt, a solid top strap, making it one of the most powerful and rugged performers of its day. 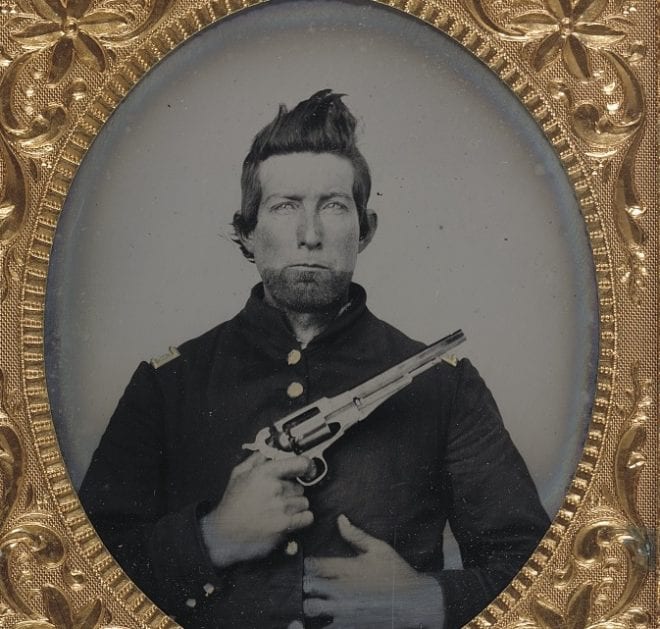 Firing a 260-grain projectile over a 30-grain black powder charge, it remained popular on the commercial market well into the mid-1870s when cartridge revolvers became all the rage. Still, other copies were sold to purchasing agents working for the armies of the Tsar, the Mikado of old Japan, the King of England, and the Republic of Mexico.

Building on the success of his line of single-action cowboy guns, such as the Blackhawk — which in itself was a revamped clone of the Colt 1873, Bill Ruger took the proven Blackhawk action and rolled it into the company’s first black powder revolver. Dubbed the Old Army, the updated hogleg looks a lot like the common Civil War-era .44 smoke wagon but internally is very different. Even looking past the cosmetic similarities between the Old Army and its New Army predecessor, the modern Ruger ditched Remington’s brass trigger guard and wonky mid-19th Century ironwork metallurgy for an all-steel construction. This makes the Ruger perhaps one of the strongest black powder revolvers to ever make it into production. 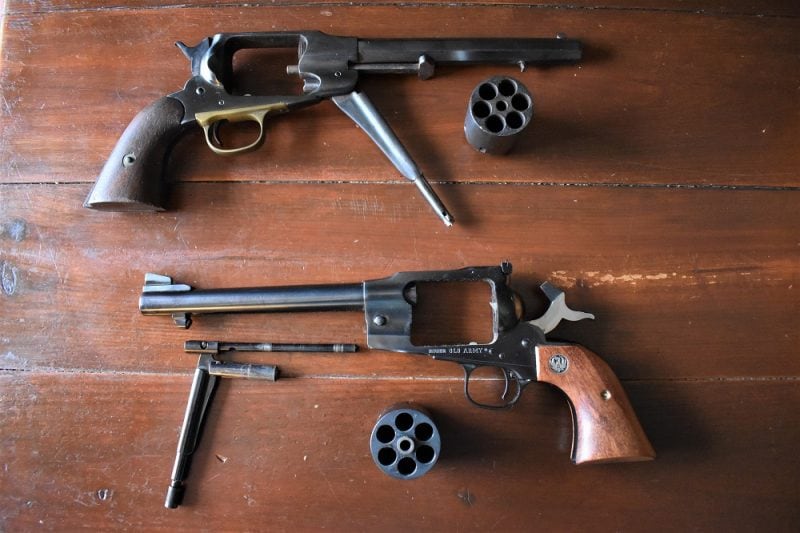 If you look closely at the Old Army, you will note that it has the flat-top and three-screw arrangement such as the original Ruger Blackhawks. Also, the Ruger uses a rounded barrel with much better sights rather than Remington’s octagonal barrel. (Photo: Chris Eger/Guns.com) 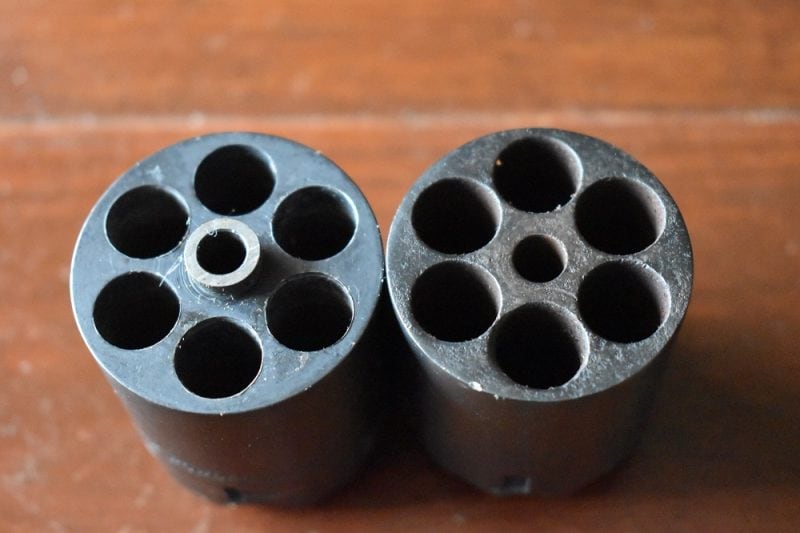 Note the difference in thickness between cylinder walls on the Ruger, left. While Ruger recommends that Old Army users start with a 20-grain load of FFFg black powder when firing a pure lead .457-inch diameter ball, others often step that up or down a bit. I prefer to use a 30-grain load over a 143-grain Speer .457 ball. When swapping the black powder cylinder out, aftermarket conversion cylinders by companies such as Kirst Konverter and others allow the more modern wheel gun to fire .45 Long Colt and .45 Schofield black powder “cowboy” cartridges. (Photo: Chris Eger/Guns.com)

Other safety enhancements on the Old Army included the ability to be carried safely with six rounds in the chamber as the Ruger has safety recesses between each chamber for resting the hammer. Further, as the hammer nose is designed to clear the uncapped nipples, it can be dry fired. 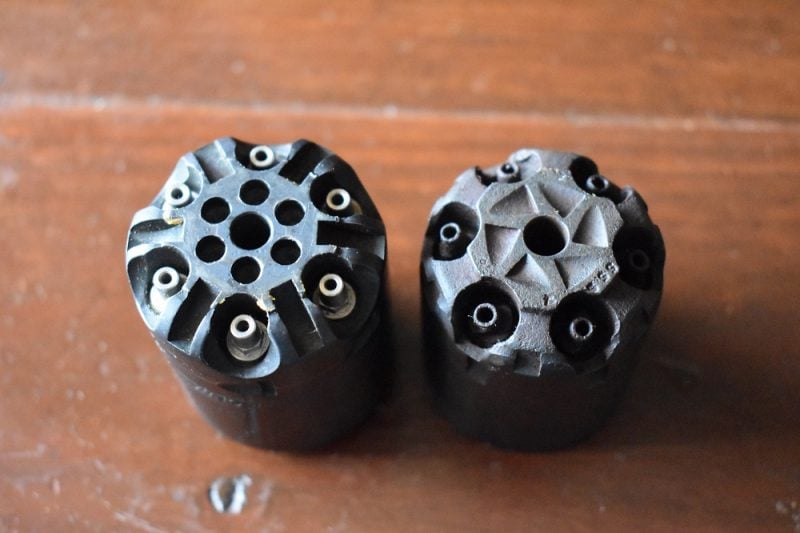 Note the safety recesses and stainless steel nipples set deeply into the massive cylinder on the Ruger Old Army model, left, compared to the vintage Remington New Army, right. This helps prevent bits of fired percussion caps from working their way into the mechanism or behind the cylinder and creating a jam. (Photo: Chris Eger/Guns.com) 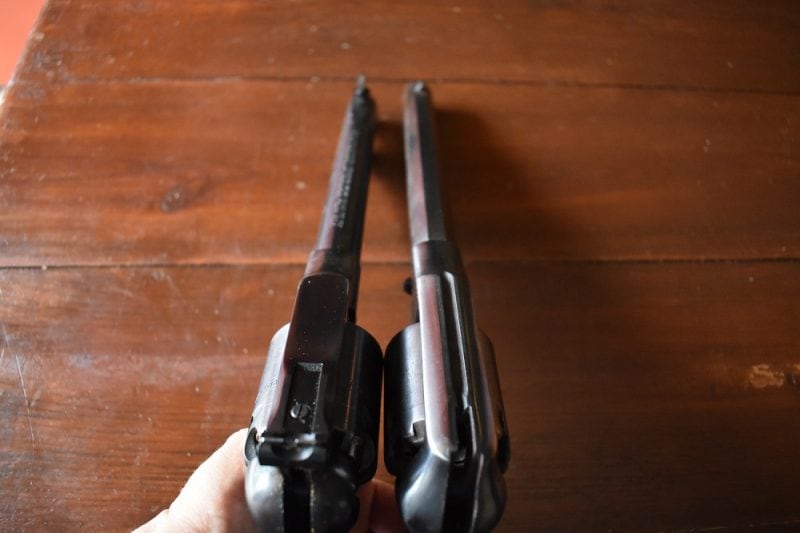 The top straps of the Old Army, left, and New Army, right, are very different, with the Ruger having rear sight that is adjustable for windage and elevation. While a fixed sight Old Army model was produced, zeroed at 25 yards, the adjustable sight variant is more common. Both guns are exceedingly accurate, with the Ruger having a distinct advantage when it comes to sights. (Photo: Chris Eger/Guns.com) 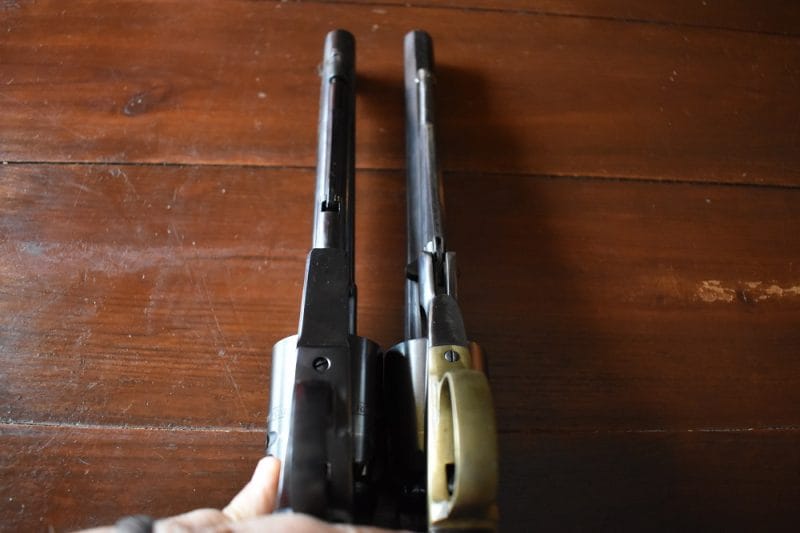 Note the extra steel present in the frame of the Old Army, right, versus the Civil War-era New Army. (Photo: Chris Eger/Guns.com) 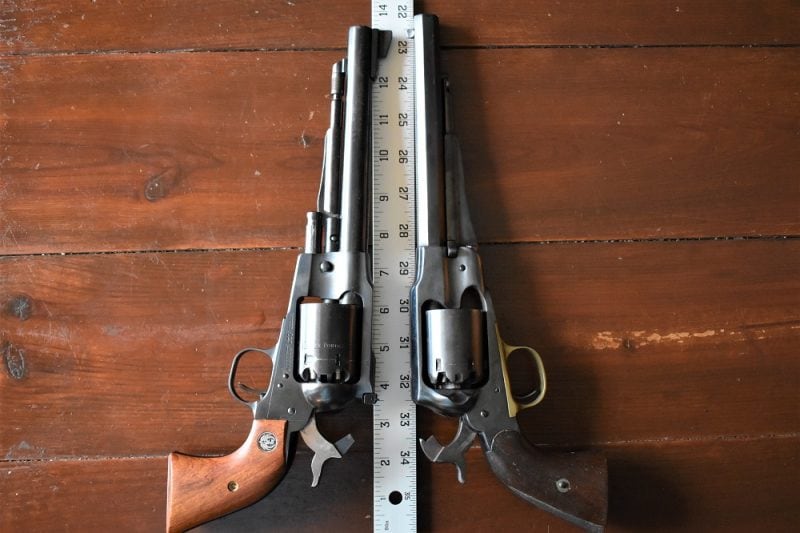 While the original Remington cavalry revolver sported an 8-inch barrel, most Ruger Old Armies use a 7.5-inch barrel, with an overall length in both cases pushing well-past the one-foot mark. Some Old Army’s were made with a downright snub-nosed 5.5-inch barrel but they are not as popular. (Photo: Chris Eger/Guns.com) 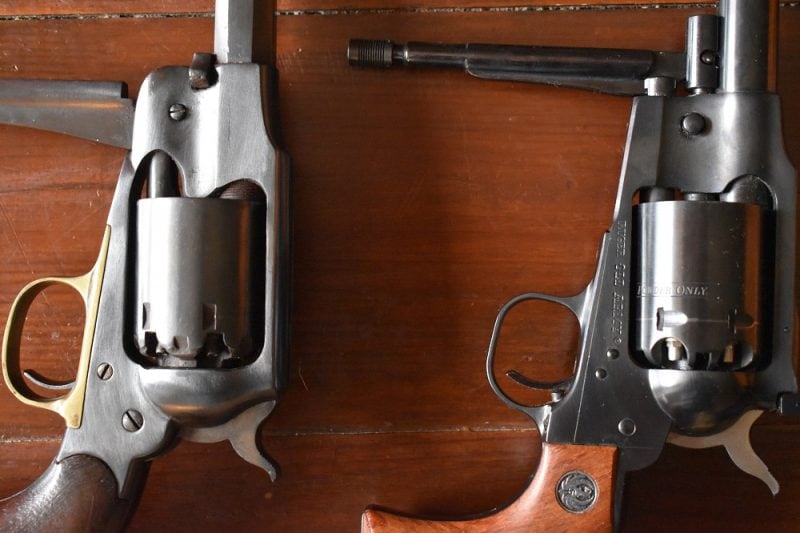 The sturdy loading lever/ramrod assembly on the Ruger is much beefier than the setup used by original New Army. (Photo: Chris Eger/Guns.com) 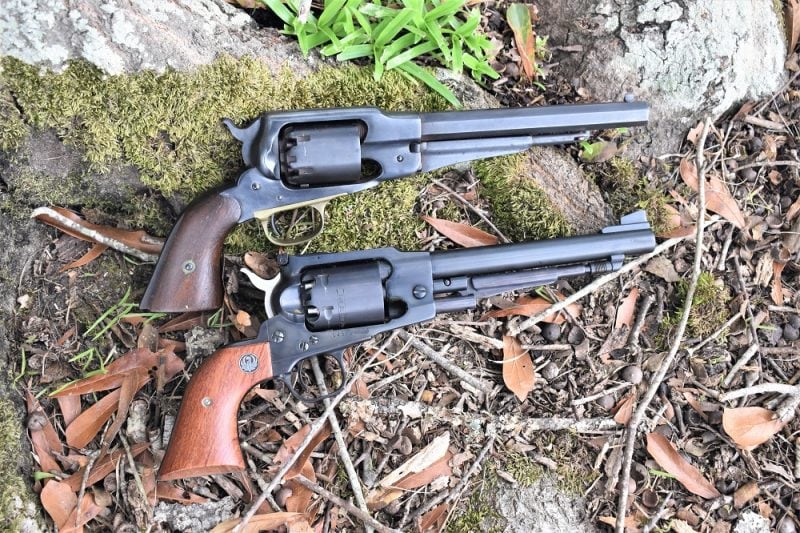 Ruger used the rear frame, sights, coil mainspring, and trigger system of his already proven Blackhawk series single-action revolver, while roughly everything from the cylinder forward was new design drawing inspiration from the classic Remington of yesteryear. (Photo: Chris Eger/Guns.com) 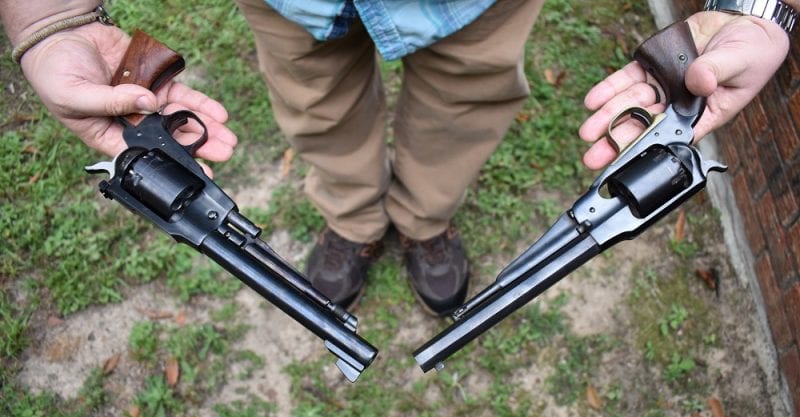 Regardless, both models fill the hands and are akin in size to a Ruger Super Redhawk. Weight on the Old Army as shown is 50.5-ounces, while the Remington goes 44.6-ounces even with a marginally longer barrel, a testament to the extra steel used in the Ruger. (Photo: Chris Eger/Guns.com)

While the author’s Old Army is blued, among the most common models are stainless examples which shrug off the soap-and-water cleanup required by black power guns much better. Odds are, if stainless models would have been made available to Gen. Grant in 1863, he would have chosen them.

Ruger kept the Old Army in steady production from 1972 through 2008, a 36-year run. This makes those big Ruger smoke generators increasingly collectible — another trait shared with the more vintage New Army series.

We currently have a selection of certified used stainless Ruger Old Army models in the Guns.com Vault, all with 7.5-inch barrels and adjustable sights. 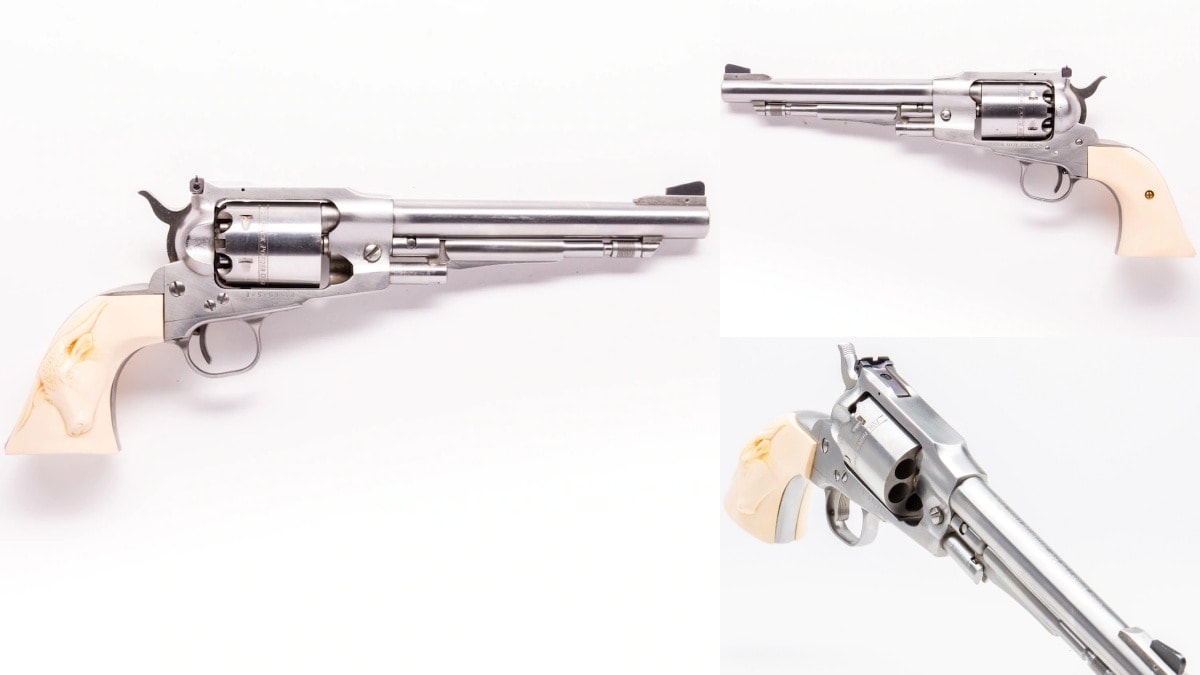 This Ruger Old Army dates to 1986 and is in good condition with aftermarket faux ivory steer head grips. 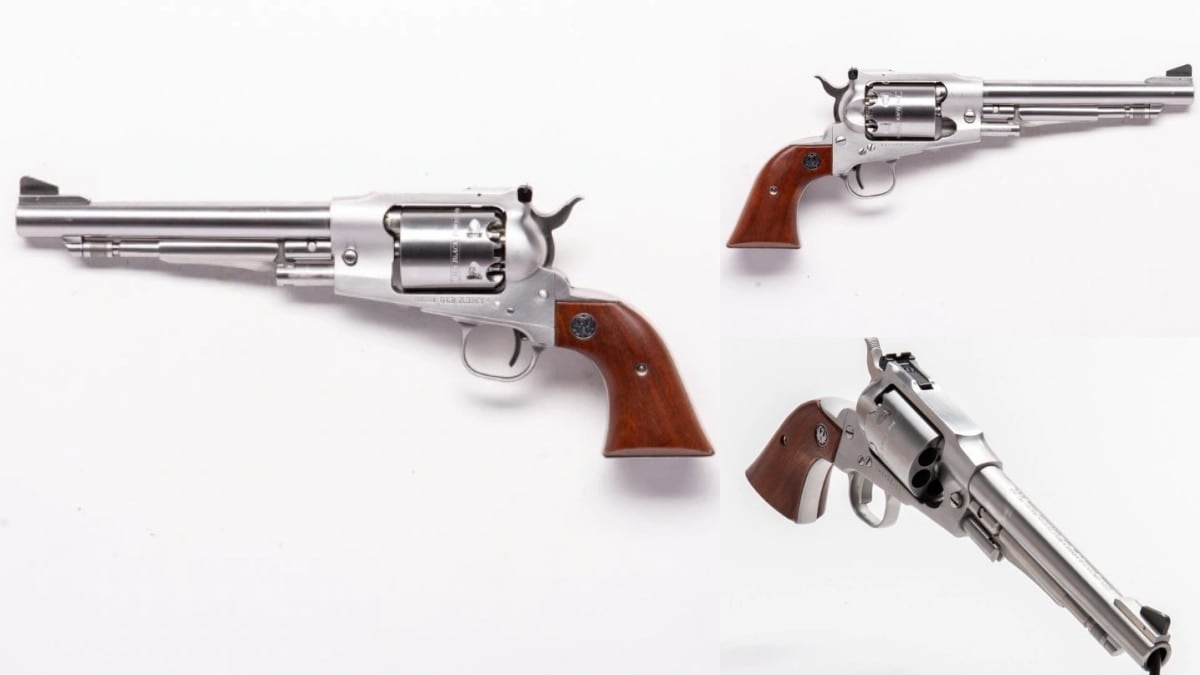 This circa 1990 model Old Army has the original rosewood factory panels. 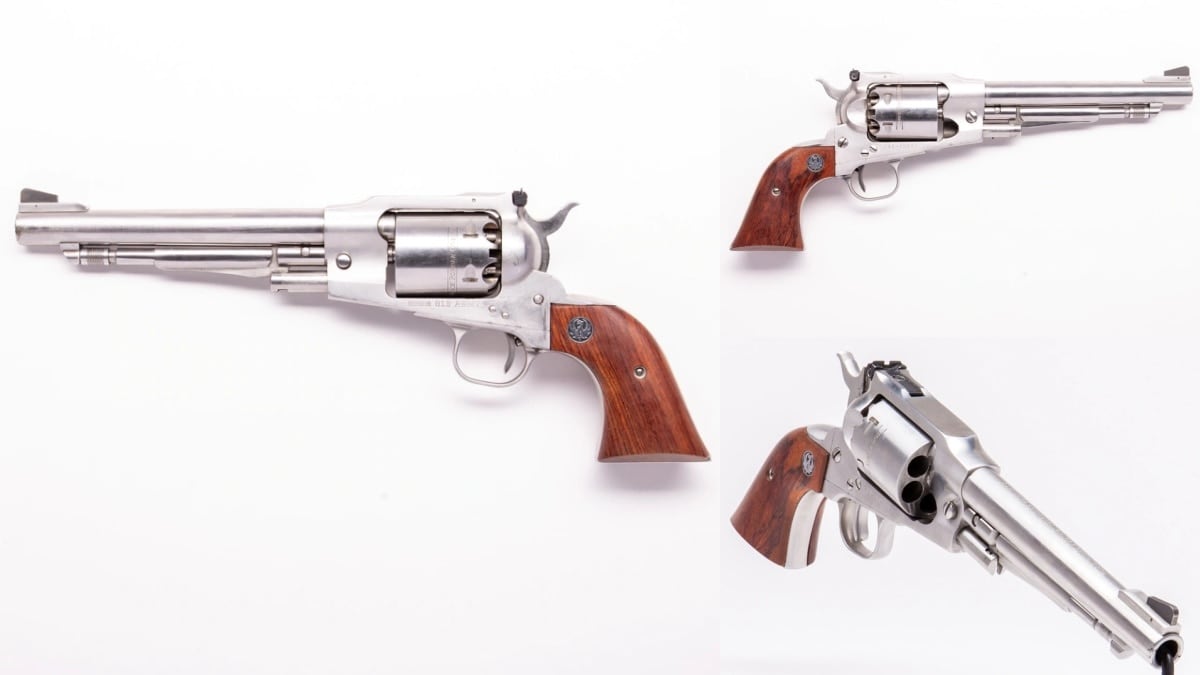 This 1995 model Old Army also has the standard rosewood grips and comes with the original box.

No matter which Old Army you choose, know that you are getting one of the most superb black powder cap-and-ball revolvers ever made. Also, if you have one to sell, we are always looking.