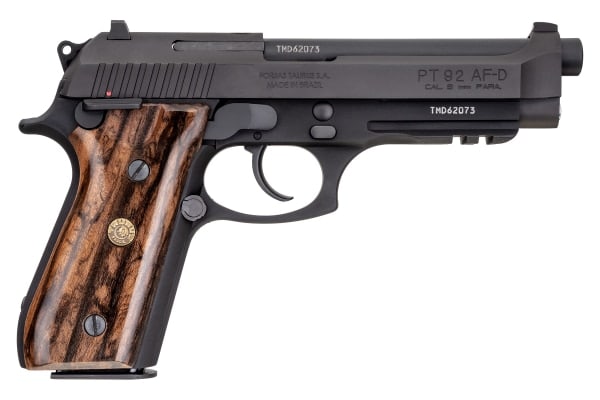 The guns, clones of Beretta’s 92 series of 9mm pistols, have been a staple of Taurus since the Brazilain company acquired the Italian firearm manufacturer’s Sao Paulo facility in 1980. While the current bright natural anodized and black anodized PT-92s come standard with black synthetic grip panels, the two new models will sport grips crafted from Brazilian walnut.

Taurus says the upgraded furniture has “rich variations in the wood’s tone, depth, and distinguished grain patterns” to give each pistol a “unique, custom look and aesthetic finish.” 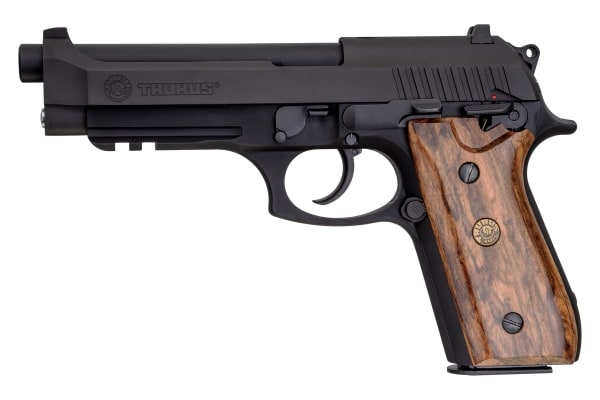 Did you say, walnut? Besides the black anodized finish shown here, Taurus also markets the PT-92 in a what they call a “Natural” bright finish.

Other than the grips, the new PT-92 models will still have the same features and specs of the legacy pistols including drop-hammer-forged alloy frames with steel slides featuring 5-inch barrels and a 17-round magazine capacity. Overall length is 8.5-inches with an unloaded weight of 34-ounces. The guns ship with two magazines.

In related news, Brazilian-made Taurus models could be in the rearview in the future for buyers in the States as the company’s U.S branch has officially begun low rate production on firearms in their Bainbridge, Georgia facility. The company announced this week the first “Bainbridge” marked gun has rolled out.

Big news out of the @TaurusUSA site this morning as they announced production is underway! While construction is not 100% complete, we are excited that the first gun marked "Bainbridge" has been rolled out! #industrialdevelopment #economicdevelopment pic.twitter.com/QXflMRgN85