Building an AK-47 with Lee Armory

Though I am admittedly a pistol girl through and through, I have dabbled in AR-15s like most gun owners. Like adult Legos, these guns piece together quickly and easily. When the opportunity to try my hand at building my own AK-47 arose, thanks to Lee Armory, I jumped on the chance to add to my repertoire of guns. What I didn’t realize, though, was exactly how different the AK building process would prove to be.

Lee Armory, located in Phoenix, Arizona, are AK specialists — building home-grown AKs for Kalashnikov fans. The company also happens to offer an AK Building Course for AK enthusiasts who want to take their fandom and love to the next level by piecing together their very own rifle. Helmed by Josh Leighton of Lee Armory, the class is an intense look into how the storied Soviet rifles are made. With an invitation and some trepidation, I jumped in on a Lee Armory build class to see how an AK compares to building an AR.

Lee Armory had all the pieces of what soon would be an AK laid out waiting to meet the tools that would smash rivets and pound pieces into place. Under Leighton’s guidance, I moved from station to station slowly putting together the AK-47.  The steps were involved and as someone who isn’t familiar with tools beyond the basics, it felt a little daunting using all the machinery. Each step presented its own challenges, some of which I turned to Leighton to help me complete. 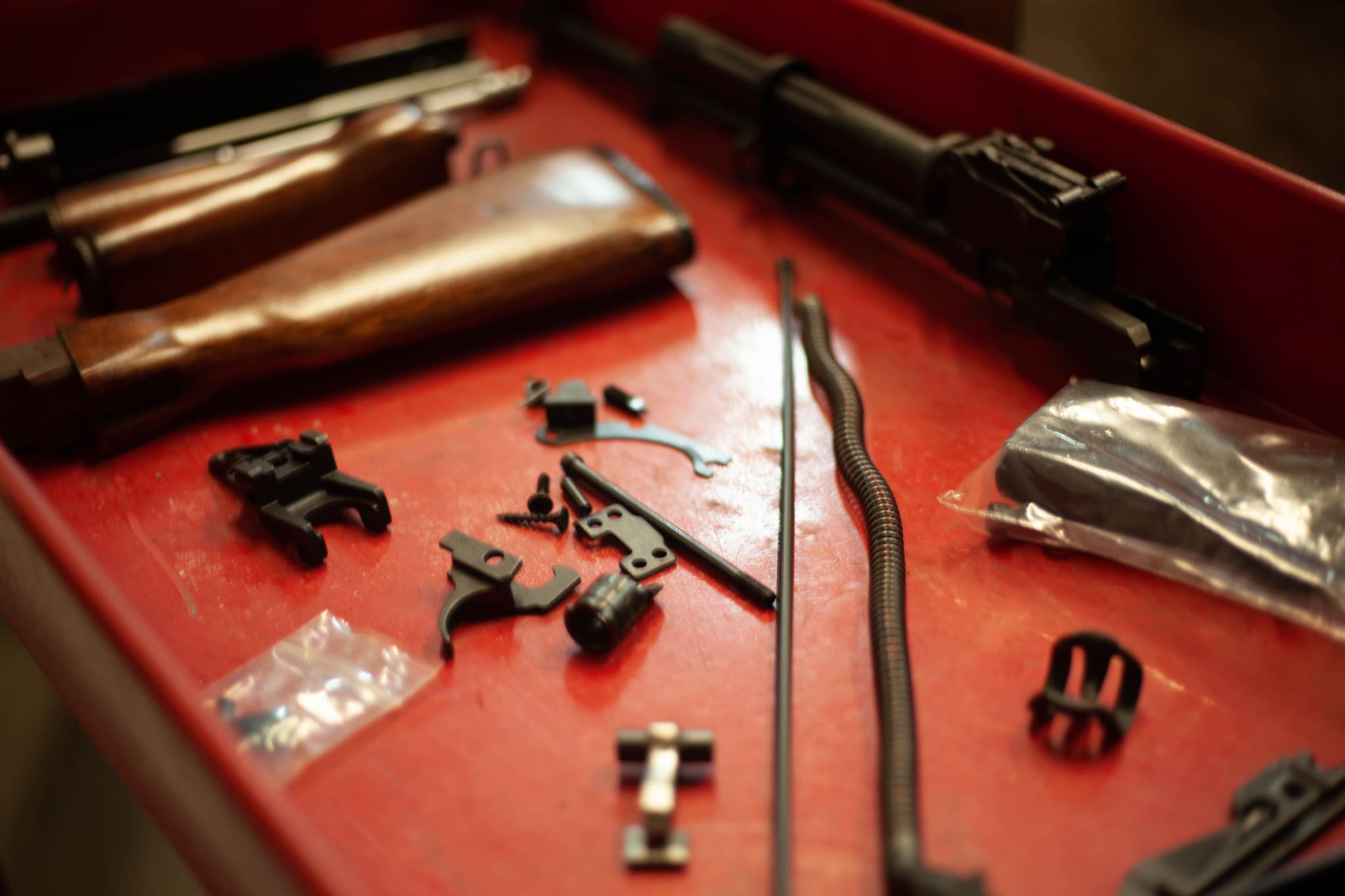 The parts of what would soon become a fully built AK-47. (Photo: Jacki Billings)

After a few hours of work, though, the job was complete. I slid the last few pieces of the AK into place and marveled at the firearm I had just built now resting in my hands. There was something so cool and fun about watching the rudimentary shapes of metal come together in the form of the famous AK-47. I didn’t have much time to marvel because the true test was upon us. After all that time and work I put into building the rifle, would it even fire?

Leighton directed me over to the test firing barrel nestled in the corner of Lee Armory’s factory. I placed the muzzle into the large hole of the blue barrel and pulled the trigger. Thankfully, it fired just as planned. After a few test shots to ensure it was truly functional we loaded up and headed to the range for a full test and evaluation. 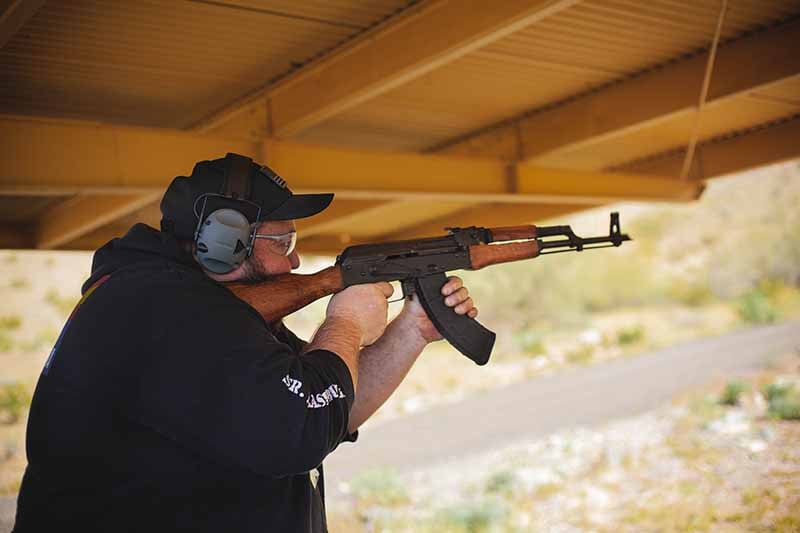 We spent the first part of our range time sighting the AK-47 in at 100-yards and once that was complete it was all fun from there. Slinging rounds of 7.62 downrange at steel targets, I was met with that satisfying ding signaling my bullets landing on target. I was ecstatic! I sat plinking with the AK I had built myself and it actually worked! The experience was intense —much different from the AR-15 I built several years ago.

I was hit with a realization of exactly why this AK build class is truly beneficial for those that want to build their own AK. Having Leighton there every step of the way to guide me and help me was essential in ensuring I built a functional and safe rifle free of frustration. Walking away from the hot Arizona range, I was really thankful that Lee Armory offers such a service and allowed me to be one of its students.

To this day, building my very own AK is one of the coolest experiences I’ve had and a memory I will surely treasure for years to come. 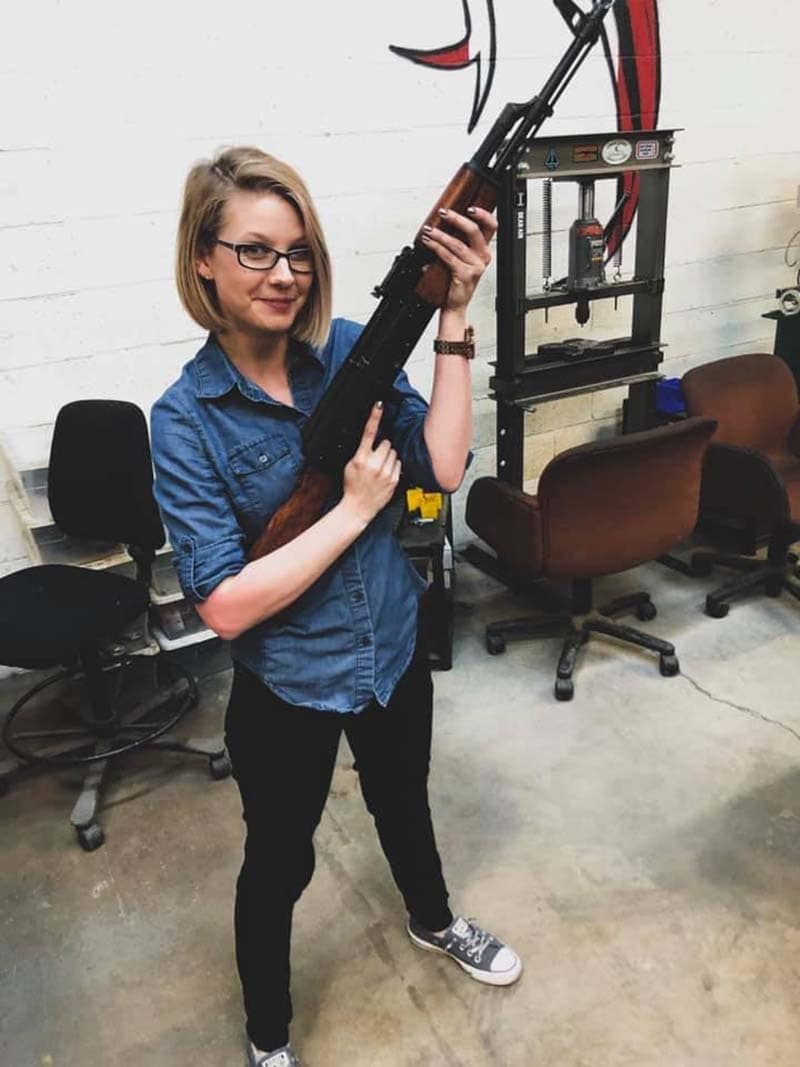 The author with the AK-47 she built. (Photo: Jacki Billings)