The Difference Between an AR Pistol and SBR 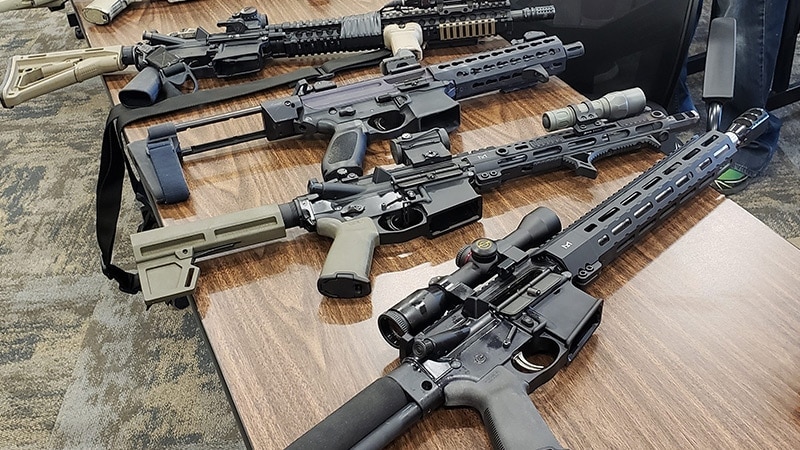 Rifles can come in all lengths, opening up the question what’s the difference between an AR pistol and a Short Barreled Rifle? (Photo: Eric Jezierski)

With short-barreled AR uppers becoming a standard option, the question “is a pistol or a short-barreled rifle?” comes up more and more. While they may look the same – and are often used the same way – they’re different.

The biggest difference is the former is regulated like any other firearm while the latter requires a rigorous licensing process. But don’t let that scare you. It’s more along the lines of tumbling than gymnastics.

In this article, I’ll dig in and find out what the difference is between an AR pistol and a short-barreled rifle, and which one is right for you.

What is an AR pistol?

The Ruger AR-556 Pistol is equipped with a SB Tactical Stabilizing Brace and fits the description of an AR pistol.

An AR pistol is an AR-15 minus the stock and, usually, long barrel. Since the guts are still the same, an AR pistol is equipped with a naked buffer tube in lieu of a stock, which, on a rifle, would be built around the tube.

More recently, AR pistols have seen a jump in popularity thanks to a device called a stabilizing brace. While these braces look and can function like a stock, they’re intended to fit around or against the user’s forearm. As the name implies, the brace helps the user stabilize the gun during use.

By the numbers, an AR pistol is an AR-style firearm without a buttstock and a barrel under 16 inches in length. In comparison, a rifle has a barrel 16 inches or longer and is intended to be fired from the shoulder, according to ATF rules.

What is a short-barreled rifle?

The Daniel Defense DDM4A1 features a 14.5-inch barrel putting it in SBR territory; however, the company circumvents the SBR label by pinning a flash suppressor on the barrel, pushing its measurements over 16-inches.

A short-barreled rifle, or SBR, is a rifle with either a barrel under 16 inches, an overall length of less than 26 inches, or both. SBRs can have a traditional buttstock, whether fixed or telescoping. Under the National Firearms Act of 1934, or the NFA, to own an SBR one must pay a small licensing fee and undergo what can be a lengthy licensing process.

Do you want a true SBR or a substitute?

The best thing about an AR pistol is that you can buy it today. There are no extra fees and there’s no additional scrutiny or waiting. You can use an AR pistol in whatever legal manner you desire. While there was once a rule against shouldering an AR pistol, the ATF has since rescinded it.

Those points make the AR pistol sound very appealing, but there are some drawbacks. For instance, depending on state laws and/or configuration, adding certain accessories like a fore-grip to an AR pistol could violate regs. Additionally, regulators may alter or update legal interpretations depending on how new laws are written or court opinions on legal challenges. With that said, don’t let government bureaucracy prevent you from exercising your gun rights.

Outside of the additional cost and lengthy processing time (at least a $200 tax and on average six months), you’re free to use an SBR like you would a rifle. The legality has not changed for decades. Once you have your tax stamp, you can rest assured that your rifle is legally yours.

The best of both worlds

In the end, the choice is wholly depending on what you want (and where you live). But, if you want an SBR but need instant gratification, why not get both? As you begin the process to obtain an SBR, go ahead and get that AR pistol.