David Smith noticed a strange twitch in his finger at around the age of 38. The shake, what he thought was the result of a shoulder injury, turned out to be an early sign of what soon would come — Parkinson’s.

Parkinson’s disease is a neurological disorder that impacts the brain’s ability to produce dopamine. This lack of dopamine, which acts as a connector between neural pathways, causes those with Parkinson’s to experience symptoms like twitching, shaking and freezing episodes which worsen over time.

“Parkinson’s is supposed to be a gradual sort of thing of losing every normalcy of your life,” Smith told Guns.com. “You lose the ability to do things like hold a cup study enough to drink without a straw. Eventually, you get a sippy cup. Eventually, you end up in a wheelchair or handicapped scooter.”

For many Parkinson’s feels like a death sentence but for Smith, it’s an opportunity. Now affectionately known as the Parkinson Shooter on Instagram and Shakey Dave in the competitive circuit, Smith has dedicated his life around a new concept he uses to battle the everyday symptoms of Parkinson’s. Gun Therapy, as he’s called it, forces his brain to release that much-needed Dopamine and the results are undeniable.

Prior to shooting, Smith’s symptoms are apparent. A noticeable quiver in his hands and legs, Smith stepped up to the starting line with a rifle in hand. A beep sounds and he’s off. After dinging the targets and completing the stage, he returned back to the start. His once quivering hands still, his gait far more steady than before. Though he is the same man, still living with Parkinson’s, for a few moments everything is calm.

“(Gun Therapy) is me trying to rebuild the pathways in the brain through repetitious shooting, lots of shooting,” Smith explained. 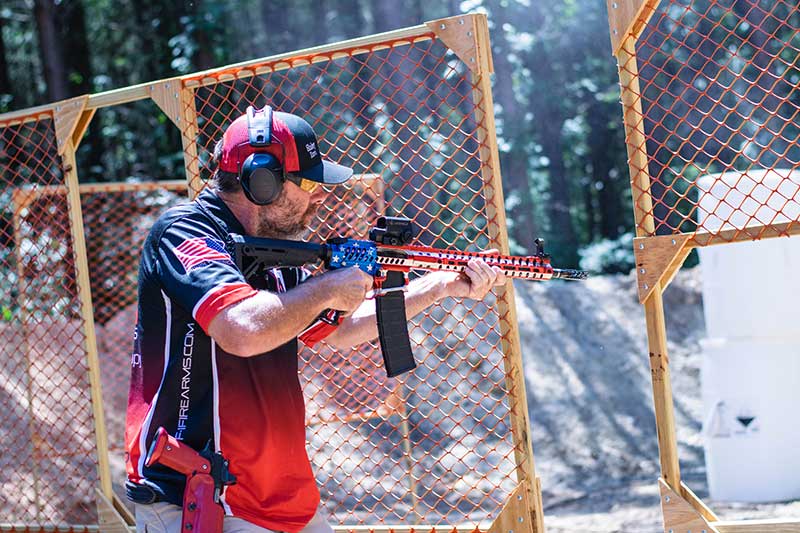 Smith discovered Gun Therapy and its benefits after he participated in a study involving Parkinson’s patients. A lover of all things guns, Smith took what he learned and applied it, diving into gun training. He rapidly discovered the positive impact guns and shooting brought to both his health and his life. Once confined to a wheelchair, Smith now walks where he needs to all because of Gun Therapy.

Smith moved to Texas in mid-2019, partnering with Instagram’s Military Badassery. The move proved a positive one, offering him a range to practice every day and the ability to showcase his Gun Therapy work through social media. Taking to Instagram and Facebook he regularly posts updates, videos and inspirational messages for others with the disease as well as other neurological disorders. Smith even invites others with disabilities to come experience the positivity his Gun Therapy range and curriculum bring. Everything in Smith’s life centers around spreading the message of Gun Therapy.

“I met my first Parkinson’s person after a year of having it. That’s where I got a lot of information on how to cope — meeting other people with it,” Smith said. “If I can answer any questions with my fanbase and that fanbase goes out and helps someone else and be a force multiplier that’s a great feeling.”

Smith says he will continue the mission of Gun Therapy, proving each and every time he steps on the range that guns and the shooting sports offer more than just fun — they offer happiness, health and hope.

Jacki Billings contributed to this article.