Introduced in 2019, the FN 509 MRD blends FN’s midsize platform with an optics ready design so FN fans can hit the range with their favorite red dot. FN sent me the brand spanking new 509 MRD to try out while Trijicon sent over an RMR Type 2 to go with it. So let’s explore this FN and get into the nuts and bolts of this design. 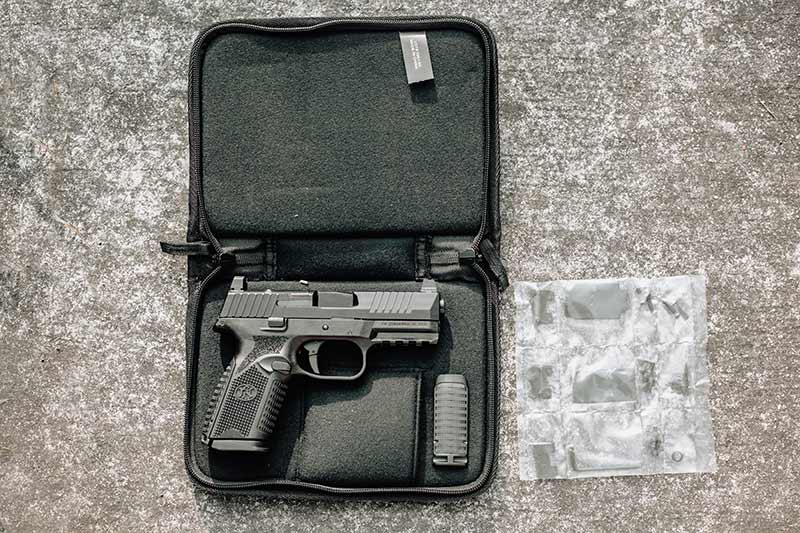 The FN Ships in a fabric case with interchangeable backstraps as well as mounts and screws for various optics. (Photo: Jacki Billings/Guns.com)

The FN 509 MRD is a 9mm chambered striker-fired handgun sporting a 4-inch barrel on a 7.4-inch length. Weighing 26.5-ounces, the FN 509 Midsize is comparable to the Glock 19 in size and brings a nice weight to those interested in concealed carry. The gun has enough heft that it manages recoil nicely without weighing gun owners down when carrying.

Shipping alongside a fabric case and two 15-round magazines, the handgun opts for a stippled grip area that feels good in the hand. It’s not overly aggressive so as to shred your palms while shooting but it also provides a nice contact area while gripping the gun. Speaking of nice features, FN brings an extended mag release to the 509 MRD. Protruding a little further from the frame, the mag release is easily engaged with the thumb and offers a nice tactile feel that you can easily find along the frame. 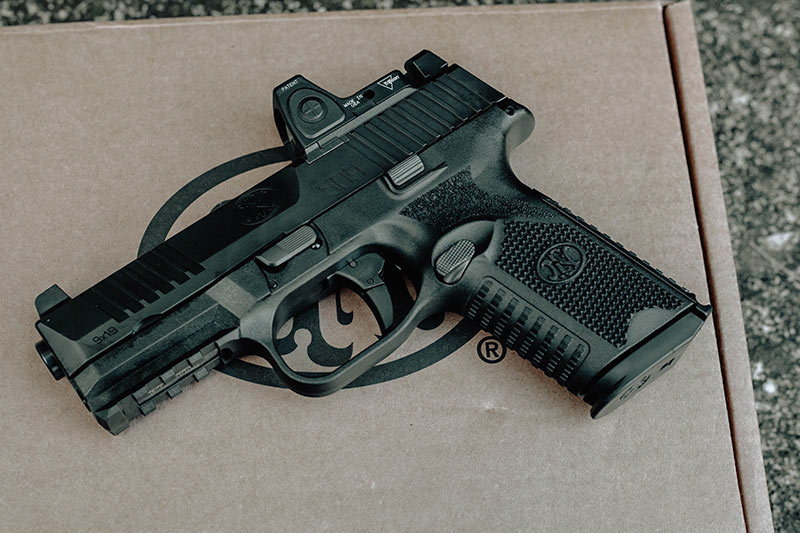 The FN 509 Midsize MRD offers an extended mag release and a nice texture to its stippling. (Photo: Jacki Billings/Guns.com)

Rounding out its basic features the FN 509 MRD also offers an accessory rail for those that want to trick out this gun with all the bells and whistles like lasers and lights, but the accessory rail isn’t what we’re here for. It’s that optics ready design that really takes the cake. 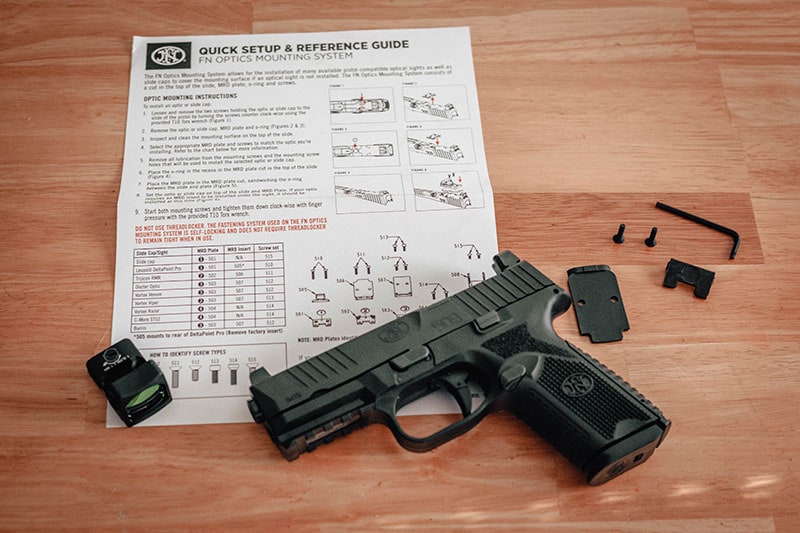 The FN 509 MRD ships with all the tools to mount the most popular red dot models. (Photo: Jacki Billings/Guns.com)

Anyone who regularly prefers a red dot atop their pistol knows the frustration of having to swap out parts in order to achieve that aesthetic on a regular gun. FN takes out that middle man by bringing a slide already cut for optics and all the parts required to fit the most popular red dots on the market — including Trijicon which is what I paired with this pistol. 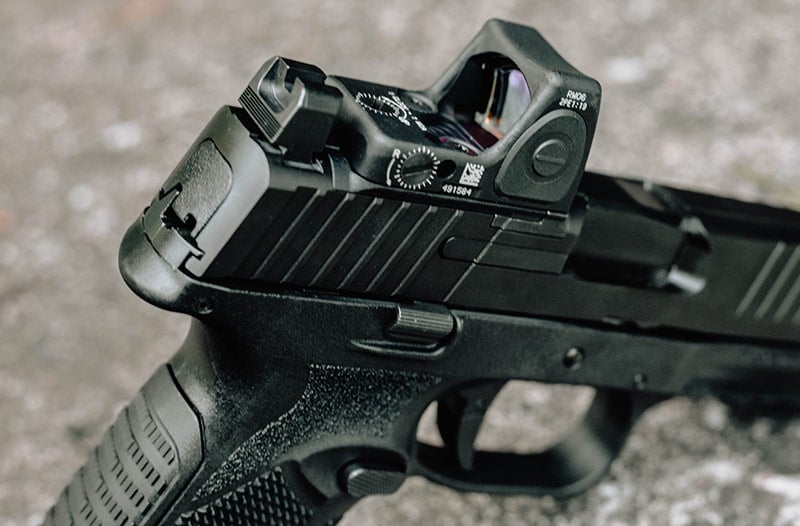 The Trijicon mounts easily to the FN 509. (Photo: Jacki Billings/Guns.com)

Adding the Trijicon RMR was easy as all screws were included in the FN’s package. It was a matter of just following the instructions and getting it properly mounted via the included plates. The bonus to this design is that no thread lock is needed to ensure the optic is secure. As for performance, the mounting plate seats the RMR just right so that it co-witnesses with the FN’s iron sights. This is handy in the event of depleted batteries or if you’re like me and sometimes just don’t want that optic. Of course, if the red dot isn’t your thing, you can simply opt to forgo it with a plate cover that is pretty inconspicuous. 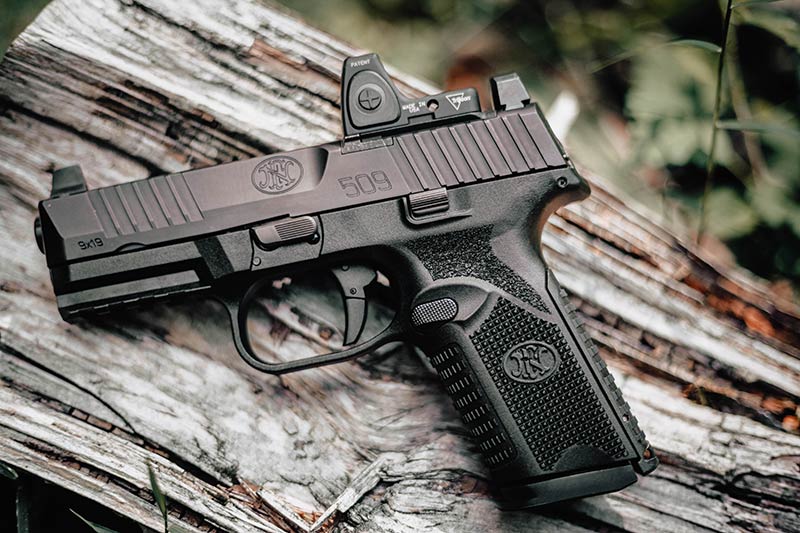 On the range, the FN 509 MRD performed flawlessly with no hiccups or issues. Feeding it a variety of ammunition, the MRD did just fine gobbling up and spitting out rounds downrange. Its midsized design worked well in mitigating the recoil from the 9mm chambering. Even better, that Trijicon optic stayed nicely in place. Over the course of several days at the range, I fired a volley of rounds and didn’t have to mess with the optic at all. It sat right where I placed it. 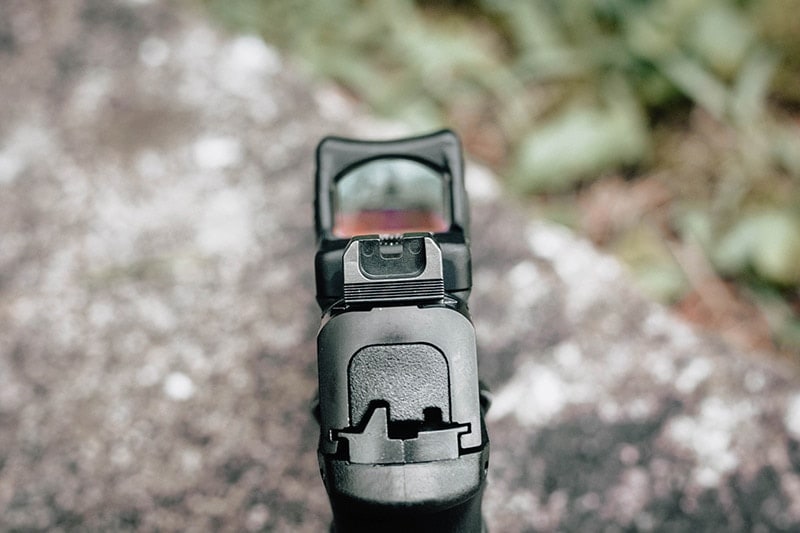 My only quibble with the design is a trivial one and really comes down to the fact that I don’t prefer red dots. Suffering from astigmatism, red dots cause more problems than they help solve so having an optic to contend with was a nuisance. Again, it’s easily remedied by removing the optic, but without a resealable parts pouch, I had to worry about losing screws and plates. At the end of the day, I recommend those with astigmatism or those averse to red dots on pistols forgo the MRD model and step down to the regular, old 509 Midsize. 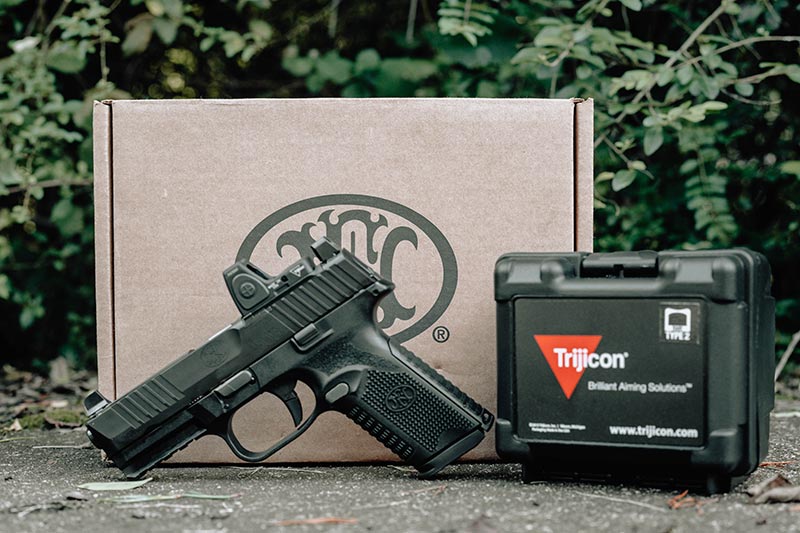 A great alternative to other popular midsize carry guns, the FN 509 Midsize MRD ultimately offers concealed carriers and gun owners the opportunity to don that red dot for those that prefer a little extra oomph out of their carry guns. The FN 509 MRD Midsize is available with an MSRP of $799. Of course, that optic is sold separately.