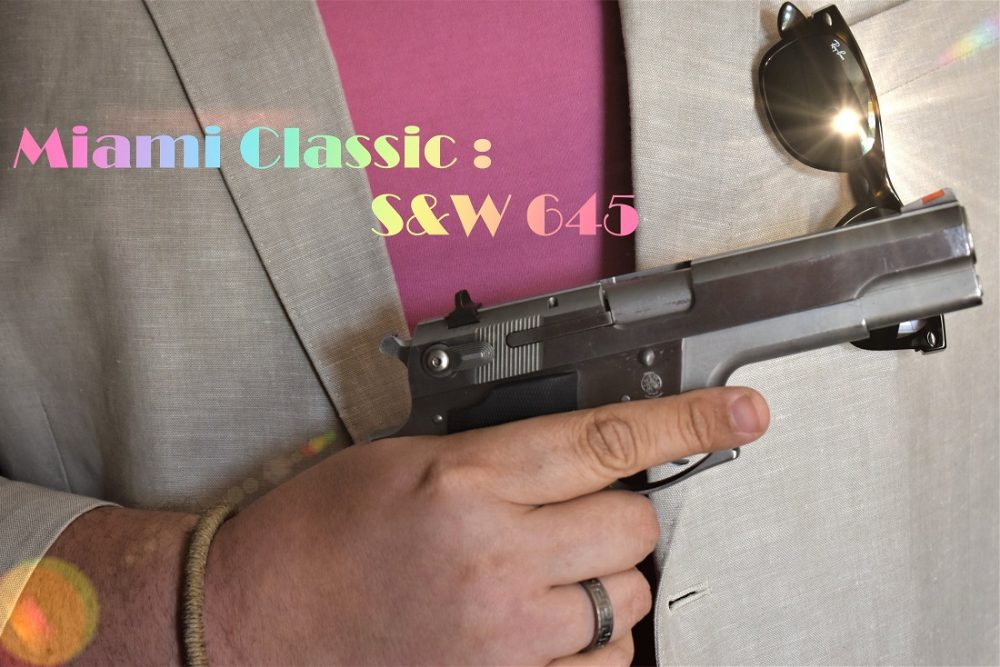 With a production run that only lasted for two seasons of Miami Vice, the S&W Model 645 is a solid classic. (Photo: Chris Eger/Guns.com)

In the early 1980s, S&W was producing a series of second-generation semi-auto 9mm pistols that followed up on the company’s earlier Model 39— itself the first non-European designed 9mm produced for the U.S. market– and Model 59 offerings. These included 8+1 shot single stacks like the S&W 439/639 and the “Wondernine” 14+1 double stack S&W 459/659. 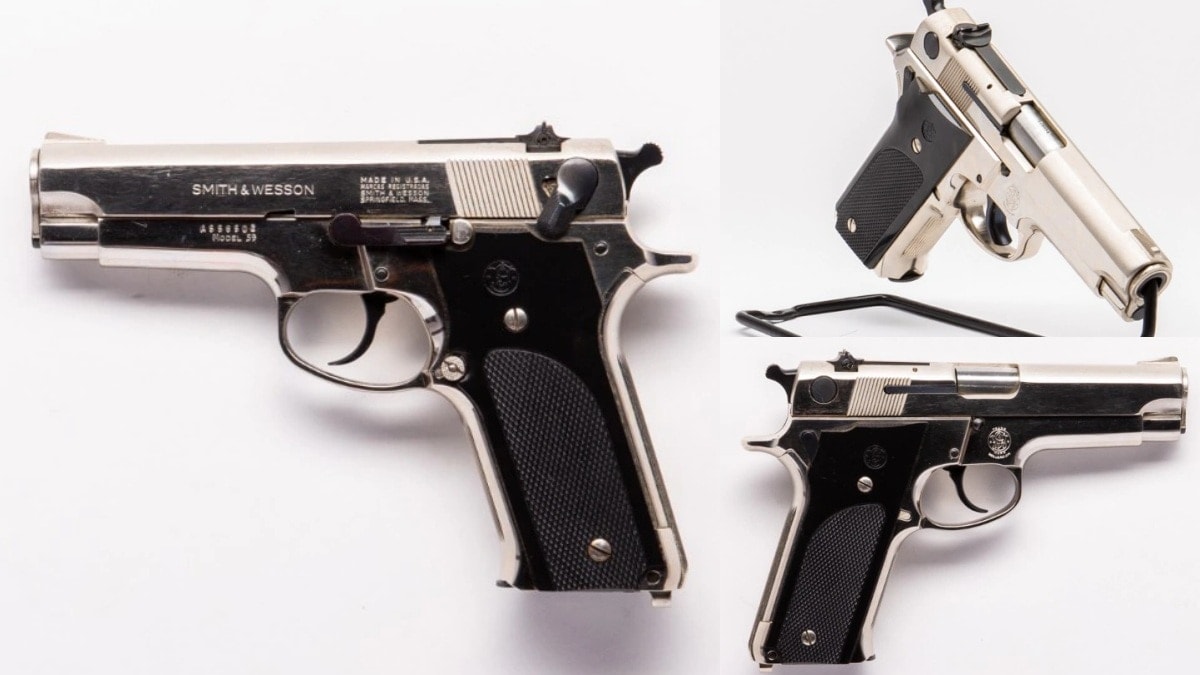 The S&W 59. Produced from 1972 until 1981, these were S&W’s first so-called “Wondernine” pistols, a term affixed to them as they had a 14+1 flush fit magazine capacity, a feat at the time only narrowly bested by the Czech-made CZ75 or Italian Beretta 92. The pistols in this family had a distinctive profile with their slide-mounted safety/decock levers and thin triggers. This nickel-finished specimen in up for grabs in the Guns.com Vault today.

These double-action models, with alloy frames, were light and, using a slide-mounted safety/decocker, safe for new users. As such, they proved popular with not only consumers but also law enforcement agencies looking to upgrade from .38/.357-caliber wheel guns.

However, there were no comparable .45ACP pistols in the lineup. 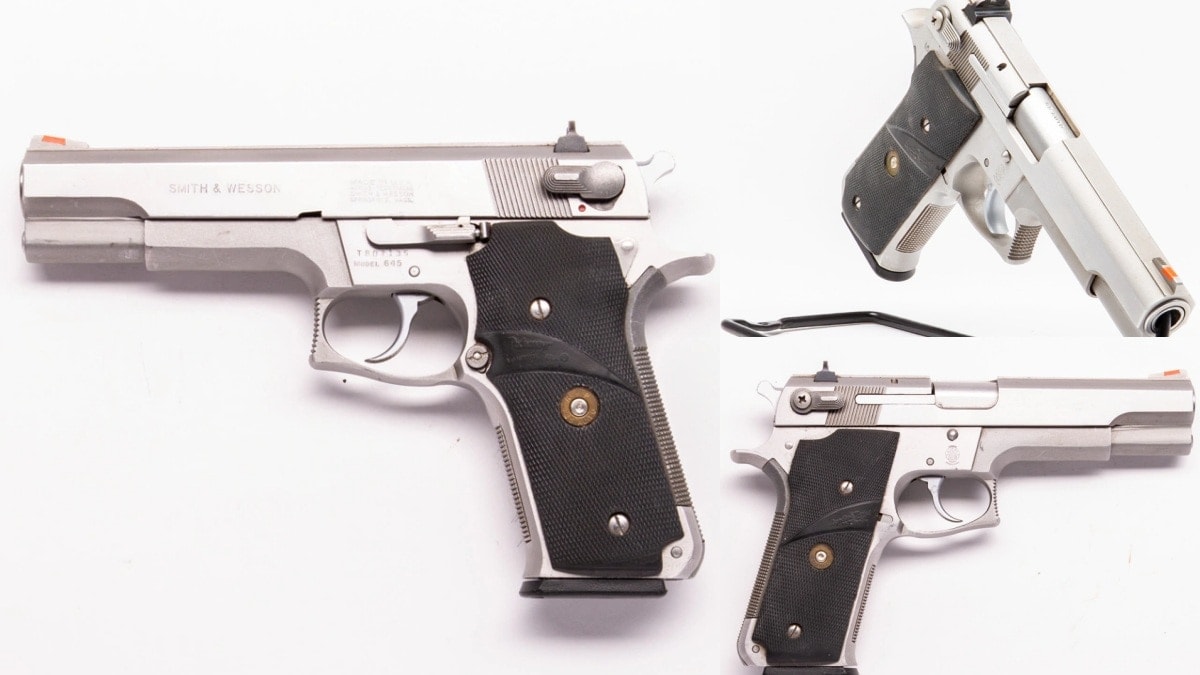 Prefaced by M1917 revolvers and later N-frames, the Model 645 was Smith & Wesson’s first commercial .45ACP semi-auto. Only made from 1985 through 1988, this child of the Miami Vice-era is up for grabs in the Guns.com Vault, Pachmayr grips included.

First produced in 1985, the S&W Model 645 was similar in size to the classic M1911 Government Issue, with an 8.5-inch overall length and a 5-inch barrel. Unlike the iconic .45ACP, it carried an extra round (eight in the mag rather than seven), had a squared-off and serrated trigger guard, and was double-action with a safety decock lever. This latter feature meant that the gun was more appealing to officers in departments that wanted to carry a .45 but was forbidden to do so in cocked-and-locked single-action pistols such as the M1911.

Speaking of departments, the 645s greatest claim to fame of its period was that it was carried and used– extensively– by the fictional Detective Sergeant James “Sonny” Crockett, as portrayed by Don Johnson in Miami Vice.

Replacing the chromed Bren Ten the vice detective with a penchant for pastels sported in the first two seasons of the show, the new-to-the-market S&W 645 appeared on-screen in seasons three and four. The good folks at IMFDB noted this was because “the producers wanted to keep up Crockett carrying a State-of-the-Art pistol.” 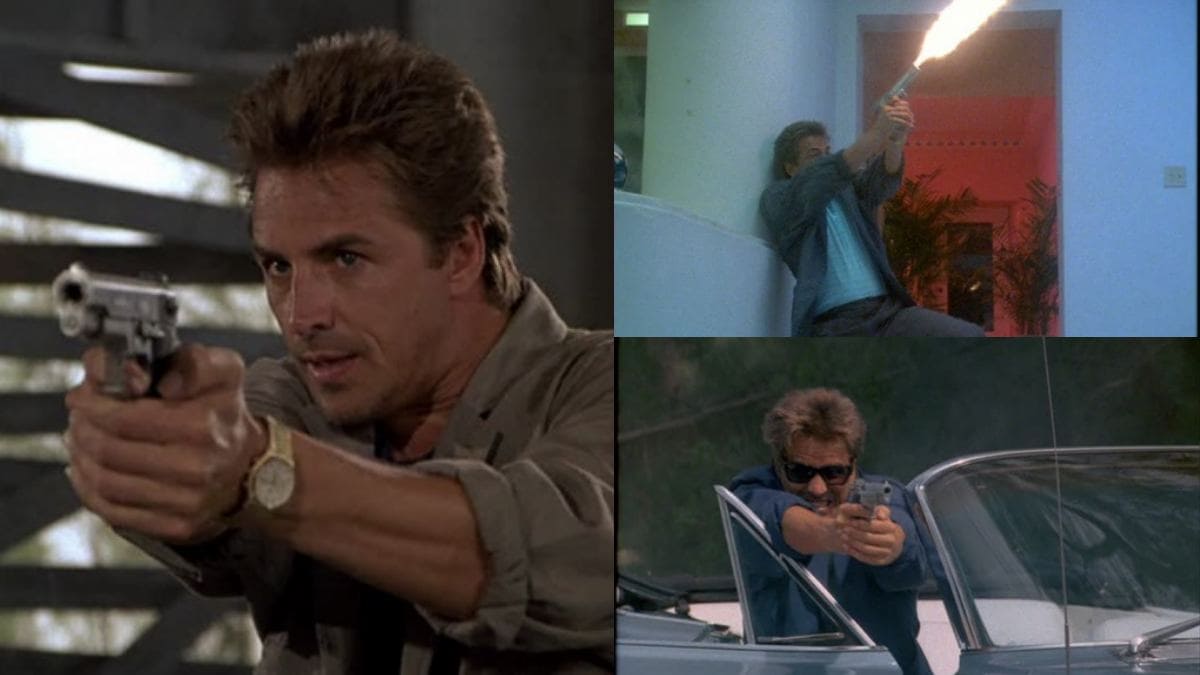 It should be noted that Michael Mann, of Crime Story, Heat and Vega$ fame, was the executive producer of Miami Vice and the show was noted for its wide array of interesting firearms. This included everything from the Franchi SPAS-12 to the .44 Auto Mag and Desert Eagle hand cannons, the uber-cool HK P7, and even a LaFrance M16K. Competition shooter Jim Zubiena served as a firearms instructor on the production and even famously appeared on screen in an episode as a hitman pulling off a lightning-quick Mozambique drill from cover.

Anyways, back to our gun… 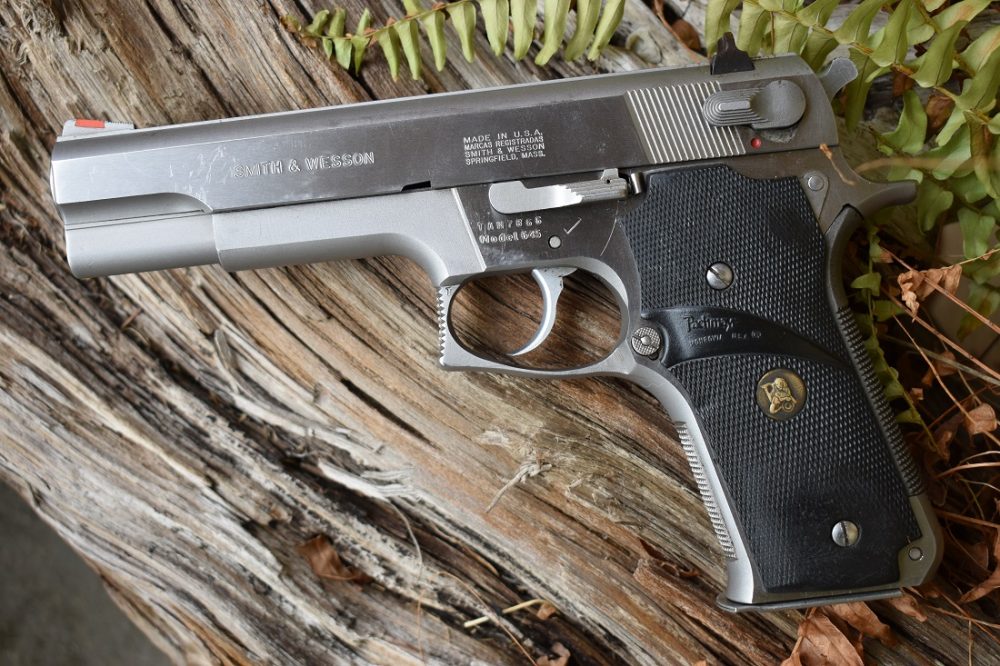 The 645 was only offered in an alloy frame and stainless slide format but did have an option between the fixed (shown) or adjustable sights. (Photo: Chris Eger/Guns.com) 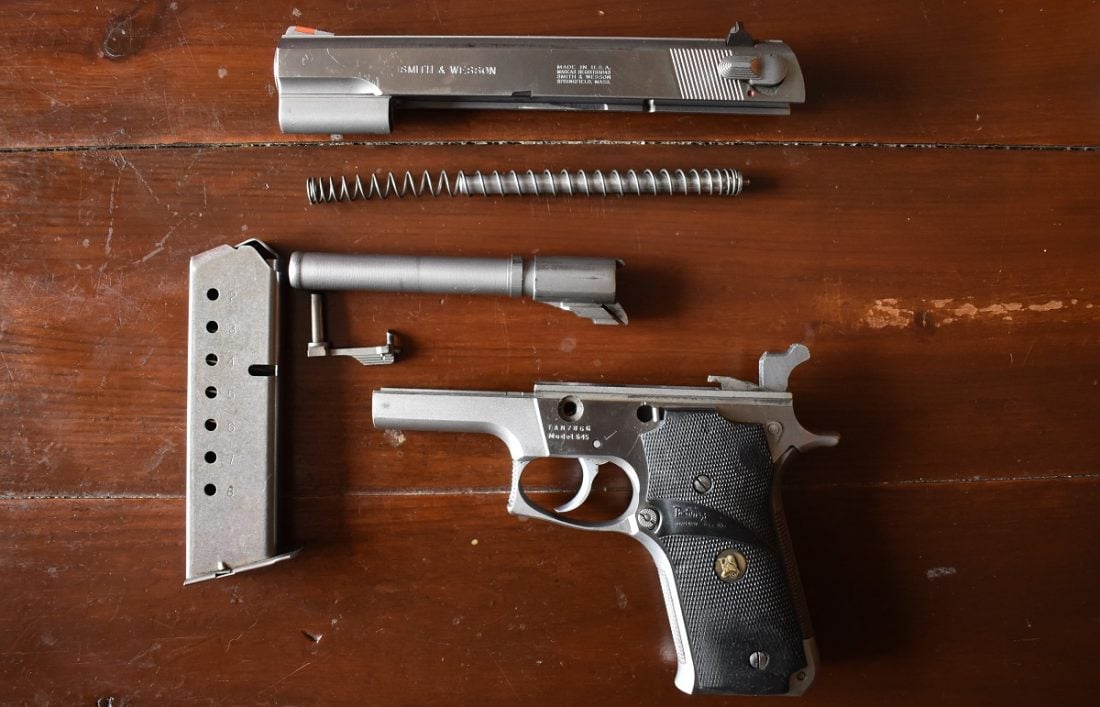 The 645 disassembles largely like an M1911, although notably without a barrel bushing. Also, note the lack of a grip safety but a large beavertail to help with hammer bite.  (Photo: Chris Eger/Guns.com) 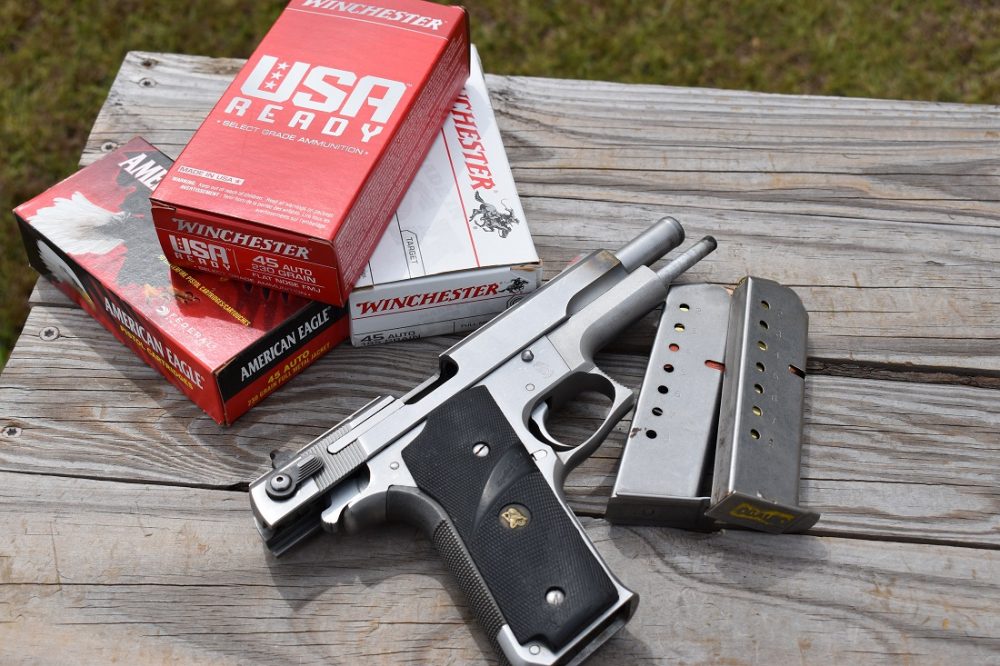 The author’s gun chews through a wide array of .45ACP FMJ ammo with ease and sports aftermarket Pachmayrs but, like most stainless guns, gets extremely dirty in the process. The standard grips are black plastic. (Photo: Chris Eger/Guns.com) 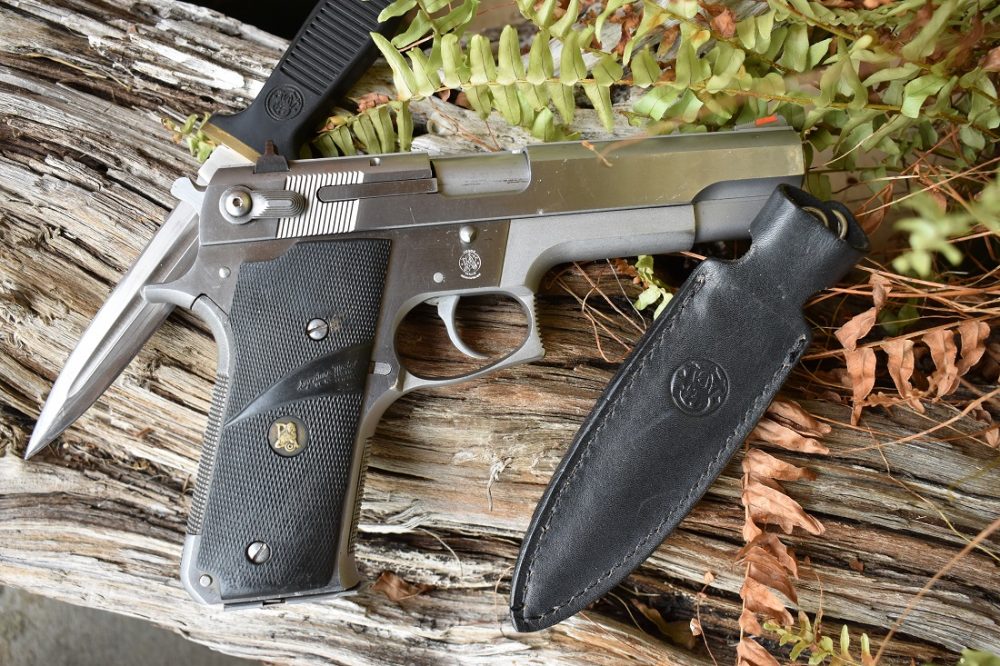 You can almost hear the Reaganomics in the distance. Smith & Wesson in the 1980s also marketed a line of “American Series” knives produced by Vermont Knives which were sold through their dealers, often in combos with the guns. At the same time, Smith also had offers for a free Member’s Only-style windbreaker ($49.95 value!) with the purchase of a 645 or similar. (Photo: Chris Eger/Guns.com) 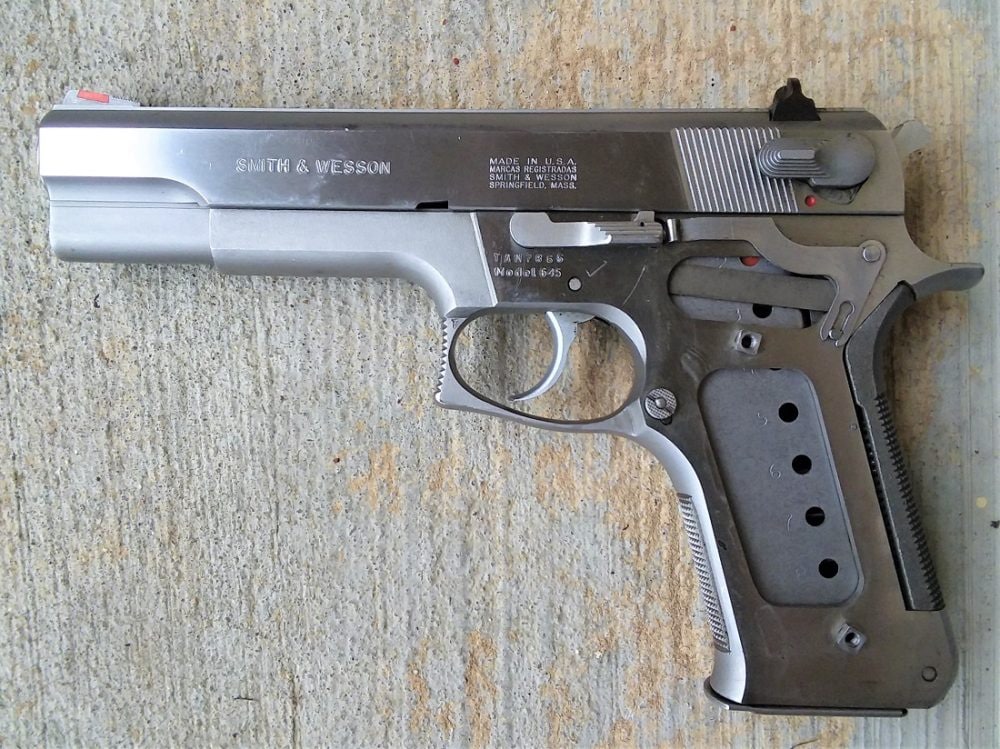 An all-metal gun other than the orange insert in the front sight and the grip panels, the 645 weighs in at 42-ounces, unloaded. (Photo: Chris Eger/Guns.com) 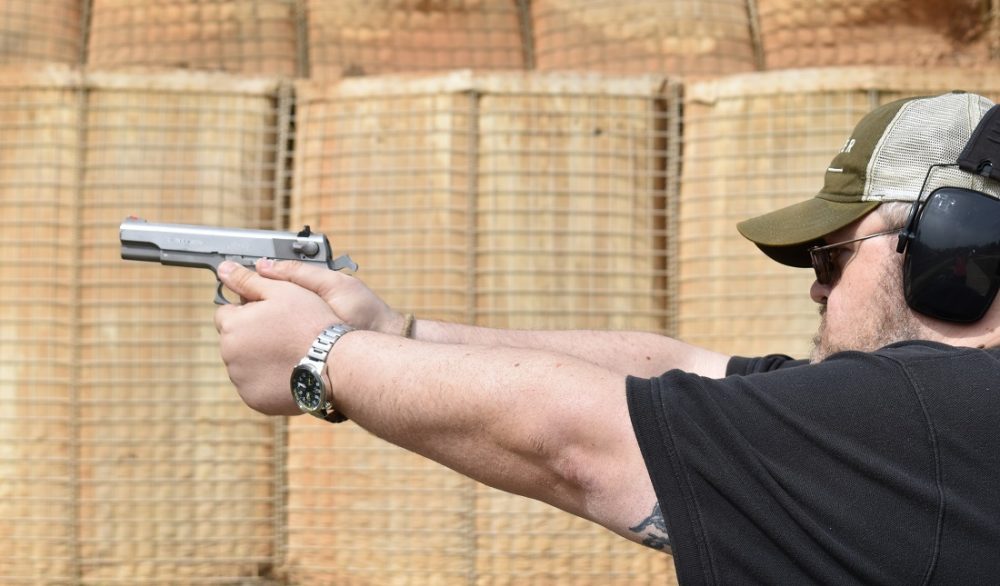 It fills the hands, even if you have big hands. (Photo: Chris Eger/Guns.com)

Smith followed up on the 645 with the very similar but more successful “third-generation” Model 4506 (with some of the early guns accidentally mismarked as 645s) which included a one-piece Delrin grip and adjustable sights. Notably, Sonny Crocket carried the 4506 in Miami Vice‘s fifth and final season.

The 4506, as well as its more abbreviated 4516 and 4566 little brothers, remained in production for a full decade while the line branched out to include DAO variants and a TSW series gun which lived on in S&W’s catalog until 2004. The short-lived carbon steel Model 4505 was meanwhile only made in 1991 while a third-generation “Value Line” Model 457 was marketed until 2006. These spawns of the 645 were Big Blue’s only all-metal .45ACP semi-autos until the company began making their GI longslide variants, the SW1911.

But that is another story.