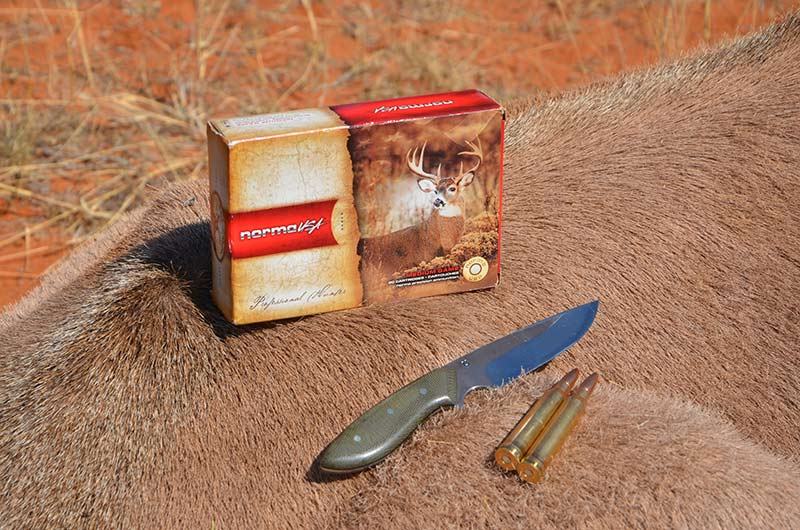 CHECK OUT NORMA AMMUNTION AT GUNS.COM

While names like Federal Premium, Hornady and Winchester dominate ammo shelves in the States, Norma is now quietly staking its claim on a share of the American market.

Norma has long quietly dominated in the hunting markets of Europe and Africa, boasting critical partnerships with Roy Weatherby as well as German-based Blaser. While traditionally European calibers are among the most popular, many American hunters are only now becoming aware of the company’s 2013 expansion of the US market and product distribution. What that means, in short, is greater ammunition options for American shooters, especially hunters.

While everything starts with accurate rifles, long guns must be fed quality ammunition in order to shine. Norma ammunition does just that. When I set out to hunt on the African plains, I packed Norma ammunition. Our professional hunter and team in Africa expressed great confidence in the European brand upon learning that was our preferred ammo for this trip.

Since its beginnings over 100 years ago in Oslo, Norway to current headquarters in Sweden, Norma has been continually evolving and expanding its reach. Current ownership falls to RUAG Ammotec, with more than 110 caliber offerings in the current catalog. This grants Norma ammunition for pretty much every caliber a hunter could ever need, including some more obscure options. While BondStrike is the hot new round on the block, the others are time-proven performers. Prices are right on par with other premium factory offerings.

I fired .30-06 BondStrike, 6.5 Creedmoor PH Scirocco II and .300 Win Mag PH Oryx while on Safari. That ammo accounted for 10 animals in Africa’s Northern Cape whilst out with Waterval Safaris. 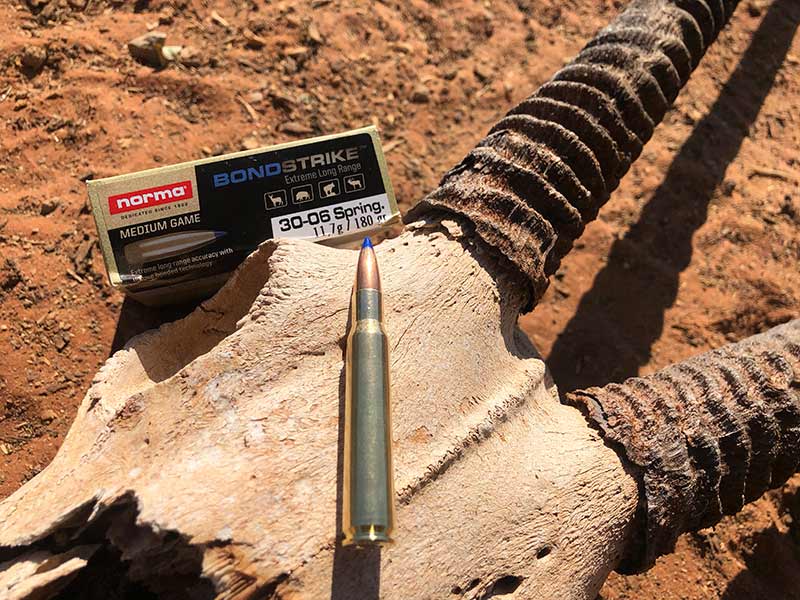 A closer look at the new Norma BondStrike ammunition shows the polymer tipped projectile. We used 180-grain .30-06 BondStrike and it performed admirably on Plains game in Africa. (Photo: Kristin Alberts/Guns.com)

With a blue polymer tip and match-grade, boat-tail bullet, the new BondStrike line is Norma’s answer to the call for extreme long-range hunting ammunition. I had the opportunity to use the brand new BondStrike in .30-06 Springfield on African Plains game through a Savage 110 Storm rifle. This ammo/bullet combination put animals down hard and quickly, though I was not able to recover any of the bullets due to pass-through shots. Our Norma BondStrike, partnered with a Savage 110 rifle and Bushnell optic, took a nice Nyala as well as a Springbok and Warthog. 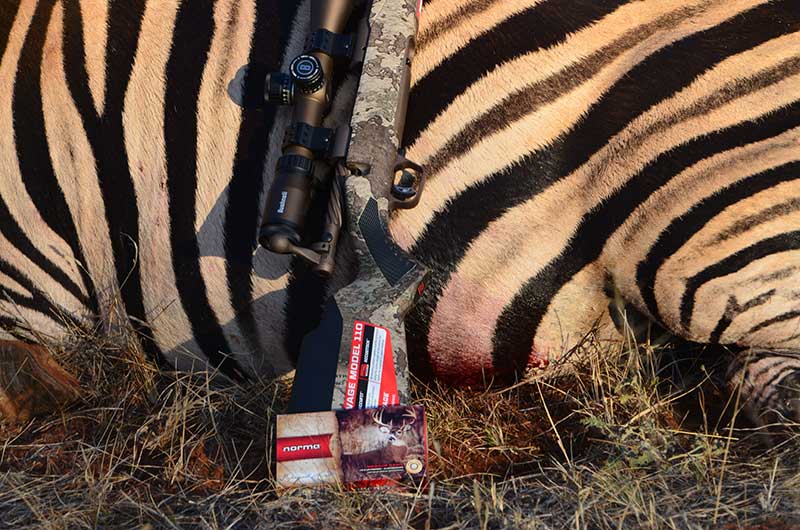 Our Savage rifles gobbled up the Norma ammo, allowing us to harvest some amazing animals on our hunt. (Photo: Kristin Alberts/Guns.com)

The Professional Hunter line of ammo from Norma USA has been proven for years and our .300 Win Mag rounds make use of the equally proven Oryx bullets. Though there are numerous chamberings and projectile weights available, I used the .300 Win Mag 168-grain Oryx bullets on larger Plains Game in Africa with stellar results.

The Savage High Country in .300 Win Mag loved this ammunition, accounting for many of the larger plains game animals: Blue Wildebeest, Black Wildebeest, Kudu, Sable, and Roan Antelope at ranges from 75 to 375 yards. Likely due to the lightweight of the projectile most of the bullets fragmented with multiple pieces recovered from the animals. 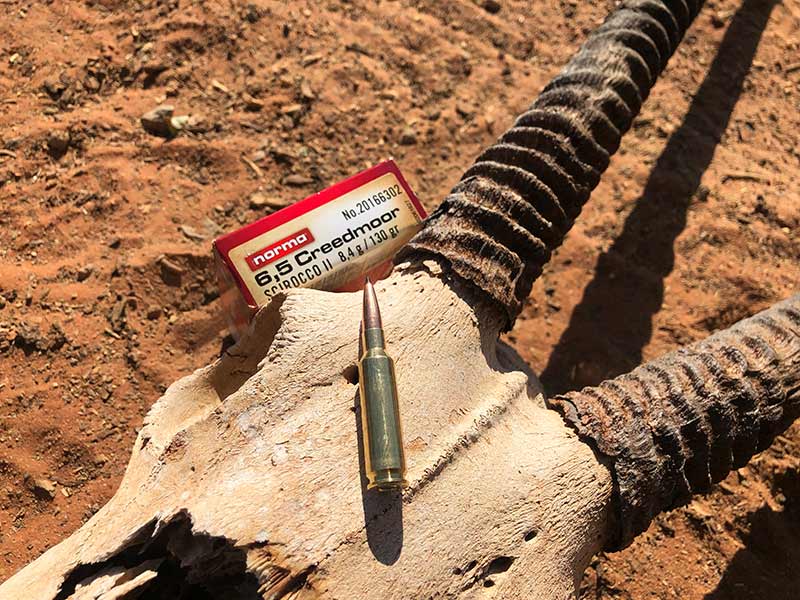 A mix of the Oryx and Scirocco projectiles recovered from African Plains game on Alberts and Pate’s recent safari. (Photo: Kristin Alberts/Guns.com)

I opted for the 6.5 Creedmoor rounds from Norma’s Professional Hunter line in large part because the BondStrike I hoped for was not yet in production. As it turns out, however, I couldn’t have asked for better performance from the Scirocco II rounds.

As the name suggests, our 6.5 Creedmoor rounds were tipped with 130-grain Scirocco II bullets. These Scirocco II’s feature a bonded lead core, a boat-tail base and polymer-tip, all with advertised 70-percent weight retention on medium-sized game. I harvested several warthogs, a zebra and Springbok while on Safari. With a well-placed shot, animals were cleanly harvested and I was able to recover several of the bullets. 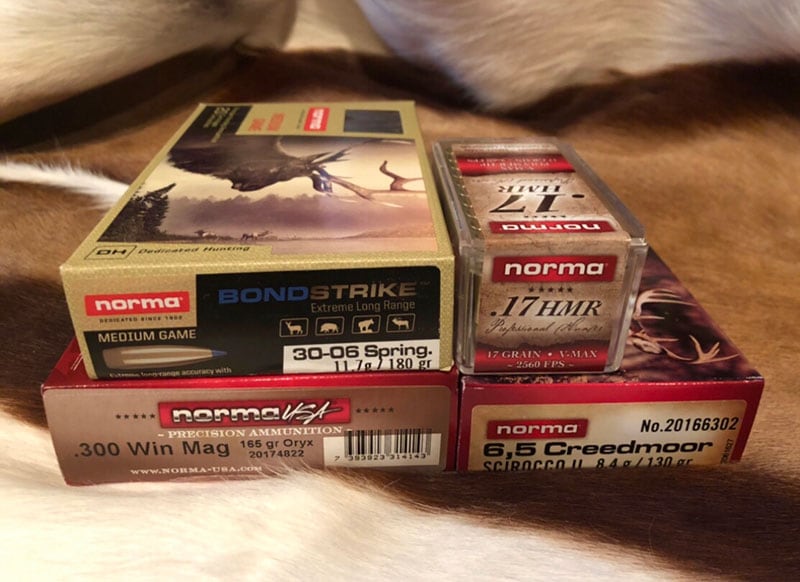 Stan Pate and I brought the best in gear along on the safari, and Norma was the ammunition of choice. Three different rifles chambered in 6.5 Creedmoor, .30-06, and .300 Win Mag using Norma Professional Hunter Scirocco II, Oryx, and BondStrike, respectively. (Photo: Kristin Alberts/Guns.com)

Though the company is certainly known for its centerfire rifle ammunition, Norma has been making a splash in the American rimfire market. Though they produce multiple flavors of .22LR, it’s the .17HMR and .22 WMR that dominate.

There’s a big swing between big-game Safari ammunition and rimfire .17HMR rounds, but Norma has the gamut covered. Their ballistic tipped 17-grain bullets—loaded with Hornady V-Max projectiles– make excellent varmint and predator rounds. The advertised velocity of 2,560 FPS and performance out to 200-yards partnered with an MSRP of $12.79 makes them a must-try. Our Savage A17 semi-auto rifle loves them, running with both excellent reliability and accuracy.

Norma has been flying under the American radar far too long, but now, the secret that Europeans and others have known is out of the bag. As I reflect back on an incredibly successful and memorable safari, my confidence in Norma ammunition is off the charts as well. You can bet I’ll be looking for Norma on the shelves of outdoor retailers.

Be sure to peep our entire selection of ammunition at GUNS.COM.