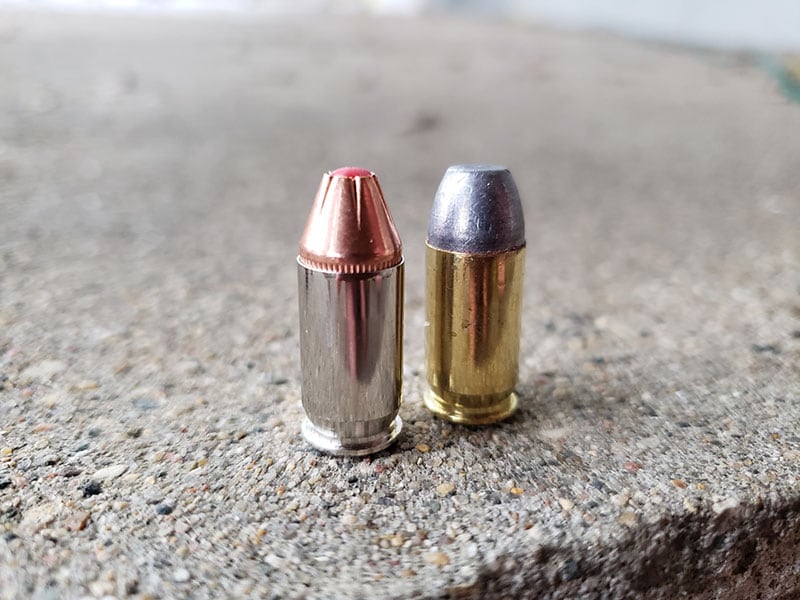 PICK UP HORNADY CRITICAL DEFENSE FROM GUNS.COM FROM $18

In the world of pocket pistols, the .380 ACP reigns supreme. Once upon a time, the .380 was considered to be weak and underpowered; but thanks to advanced bullet technology, the .380 has a new life in the modern world. We’ll be taking a look at two different .380 ACP loads — one designed around advanced expanding bullet technology and the other that adopts an old-school approach to achieve incredible penetration.

The .380 ACP loads in this article are designed around two different perspectives on what yields effectiveness. The first is one you’ve likely seen in the form of the Hornady 90-grain Critical Defense. This load features a proprietary jacketed hollow point with an FTX polymer tip. It is not a stretch to say that this load is what helped escalate the popularity of the .380, catapulting it to a modern self-defense mainstay. The FTX bullet technology allows for the projectile to pierce heavy clothing and minor barriers without deforming or clogging.

Its competitor in this showdown is the Buffalo Bore 100-grain +P hard cast. This load is essentially similar in construction to cowboy ammo from years past. Unlike the Hornady bullet, the Buffalo Bore is not designed to expand at all, instead, using the same premise as big game hunting. A solid-enough bullet drives straight through the target allowing vitals to be reached through thick hide, bone, and fat. This load is ultimately meant to drive in deep, penetrating as much tissues as possible. 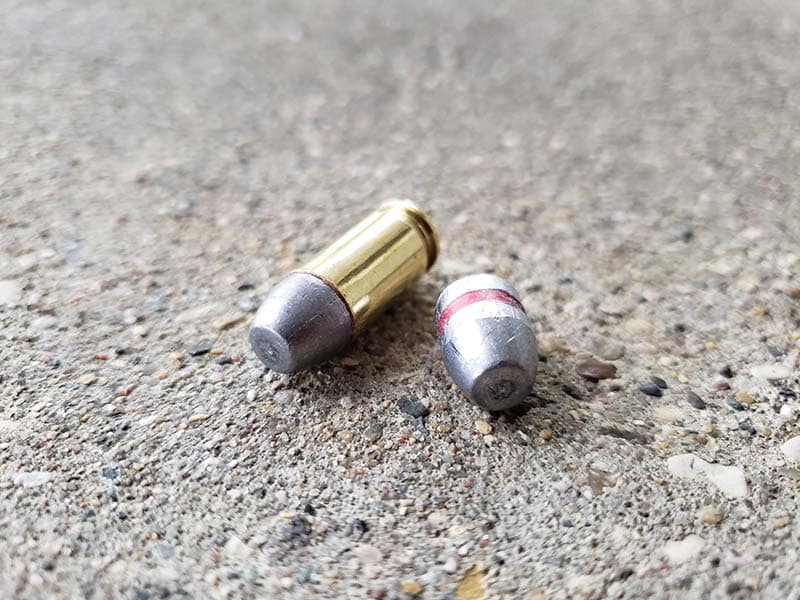 SNAG YOUR OWN GLOCK 42 FROM GUNS.COM

We selected the Glock 42, chambered in .380 ACP, as our pistol platform. A popular option for many concealed carriers, the G42 brings a reliable pocket pistol construction that packs a punch. Though some .380 ACP micro pistols suffer from poor reliability, luckily, the Glock 42 seems to always do well on paper. Both the Hornady Critical Defense and Buffalo Bore loads were tested at a distance of 10-yards for accuracy. Each was fired from a rest and produced five, five-shot groups.

The Hornady load produces an average group size of 2.1-inches. The largest group produced was 2.75-inches while the smallest came in at 1.75-inches.

The 100-grain Buffalo Bore load produced slightly larger groups. The average five-shot group at 10-yards was 3.2-inches. The largest and smallest groups did not deviate very much at all, with the largest being 3.5-inches and the smallest being 3-inches.

Velocity testing was conducted over an Oehler 35P chronograph. The velocity recorded here was the average of 20 shots fired 5-feet from the chronograph. The Hornady load averaged 947-ft/s. The Buffalo Bore load, despite being heavier, launched at an impressive average of 1,100-ft/s. It should be noted that the Buffalo Bore load is much hotter and is rated to +P pressure. 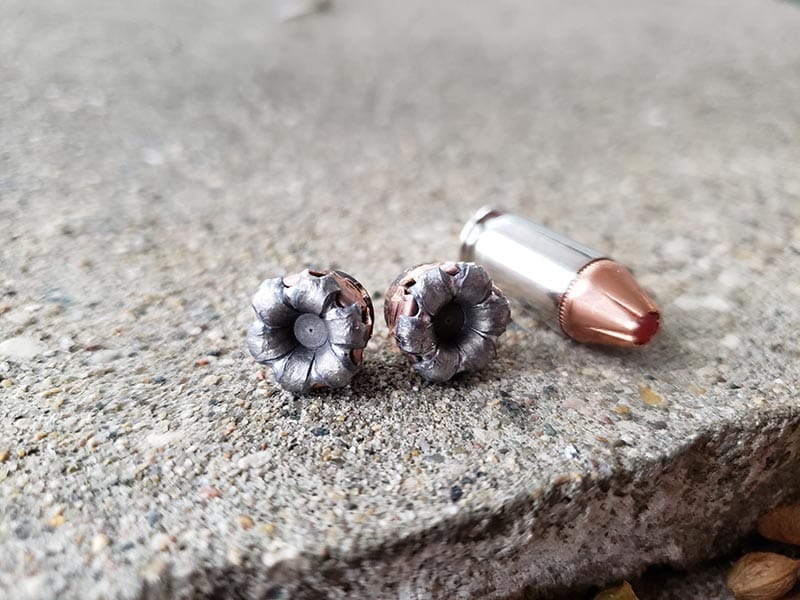 Although it is a heavier bullet loaded to higher pressure, the Buffalo Bore 100 green hard cast +P does not show a tremendous increase in recoil over its competition. The added power is something that can be felt in a gun as small as the Glock 42, but it doesn’t deliver a significant difference. It is snappier than the Hornady offering, but the impulse is smooth.

It wasn’t easy to declare a winner in this category, because there has to be something said for a small gun that has very little recoil. The Hornady load had barely any recoil at all, but for the added power, we felt the price of the added snap was worth it.

While the win was handed to the Buffalo Bore load in the recoil category, this is mainly because it had more power-per-shot for a marginal increase in recoil. When it comes to shooting quickly, the low recoil of the 90-grain Critical Defense became an advantage.

Accuracy and low recoil seem to go hand in hand, so the choice became somewhat obvious. The Buffalo Bore load also generates copious amounts of smoke at the muzzle. While not quite like black powder, it does create a cloud of thin white smoke. This is not a liability, but it can slightly obstruct the shooter’s vision in low light. 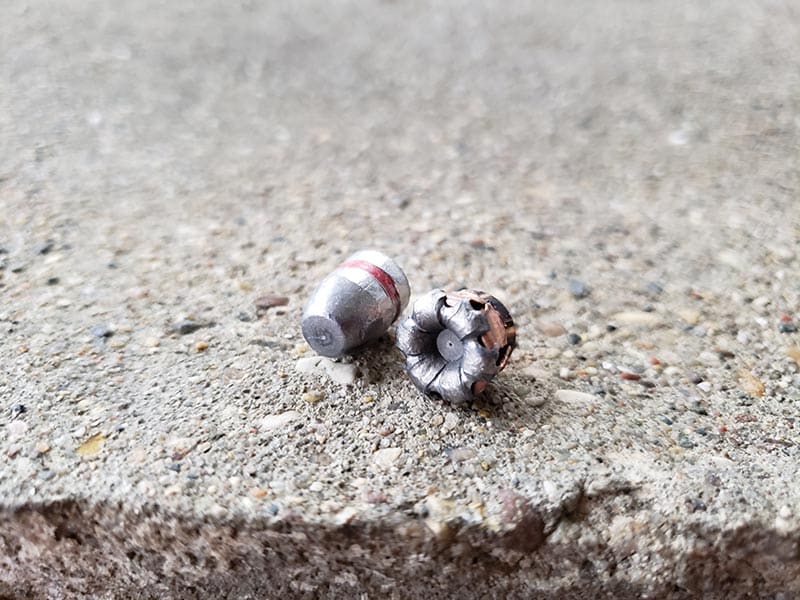 When comes to the gel test, we had a hard time declaring a winner. In terms of penetration, the Buffalo Bore load went through an amazing amount of bare gel considering how small of a bullet the .380 launches. It achieved an averaged penetration depth that rivaled big calibers like .45 ACP and .44 Magnum of similar bullet construction. The little bullets went in an astounding 41-inches, completely passing through two entire blocks of gel before coming to rest in the third.

The Hornaday load was not designed to penetrate but, instead, offer expansion and energy transfer. The Critical Defense bullets averaged 9-inches of gel penetration. All the recovered bullets showed excellent expansion. Penetration depth for three shots resulted in very uniform performance.

A tie was issued here because the bullets, while of the same caliber, were designed for two very different purposes and each achieved their specific goals. 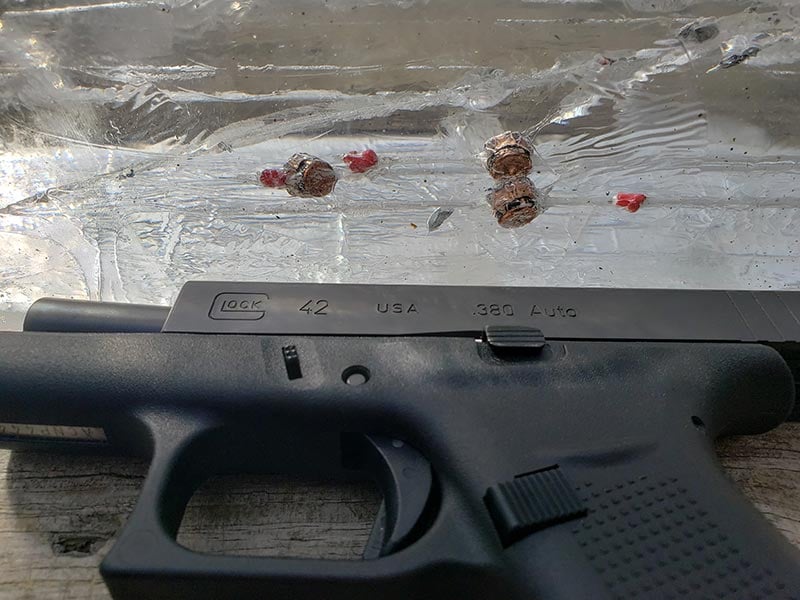 A Glock 42 was used to test both loads. (Photo: Josh Wayner/Guns.com)

GRAB THE WINNER, BUFFALO BORE, FROM $21

These two loads each offer their own advantages for the .380, but the same advantages that they enjoy in a small gun, such as penetration and low recoil, may not translate to larger and more common calibers. The .380 is so small there isn’t much middle ground. In larger calibers, you can find mediums in performance that aren’t so extreme.

It was not without great debate that Buffalo Bore was ultimately declared the winner. When it comes to a gun as small as the Glock 42, every advantage must be sought out. Penetration is a quality that is usually lacking from small-caliber pocket pistols, so it is refreshing that the Buffalo Bore load shoots through any angle of a target.