Modular Rifle Champ: What Makes the FN SCAR So Special?

With 21st Century styling, the modular and innovative SCAR series of rifles by FN has proved to be the people’s champ when it comes to modern small arms platforms.

Sprouting from requirements posted in the 2004 Special Operations Forces Combat Assault Rifles program and the later 2011 U.S. Army Individual Carbine competition, the latter intended to find a successor to the M4 carbine, FN’s SCAR (Special Operations Forces Combat Assault Rifle) system beat out a field of no less than a dozen rivals. Using a short-stroke gas piston system that has proven clean and reliable in use, the series has low recoil, are easy to maintain, and feature increased reliability when compared to traditional AR platforms. As they did not rely on the same buffer-tube required by the AR-pattern rifle, the SCAR can use folding buttstocks

Further, they are adaptive, with users able to change barrels among various lengths in the field. 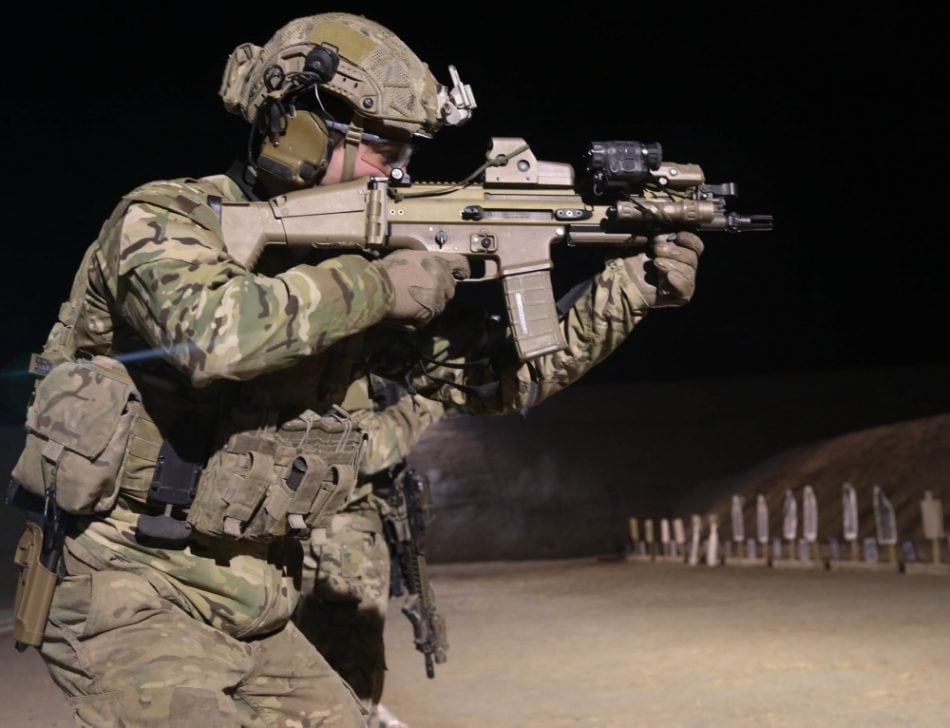 “They were looking for a modular set of rifles that would share common operating features between a light version, which would be a 5.56, and a heavy version which would be a 7.62,” Ben Voss, product manager for FN’s SCAR line, told Guns.com. “So they had to have the same operating features so their operators wouldn’t have to train on different styles of rifles– but also had to have a lot of parts commonality between the two so the rifle is easier to maintain in the battlefield logistically.”

Built in the U.S. at FN’s Columbia, South Carolina, plant since 2008, the SCAR series has been deployed downrange with any number of SOCOM units from the U.S. Army Rangers, Special Forces and U.S. Navy SEALs to Air Force Special Operations and Marine Raiders, not to mention overseas with allied military and counter-terror units in more than 20 countries. These select-fire versions included the 5.56mm NATO Mk 16 (SCAR-L), 7.62mm NATO Mk 17 (SCAR-H), and Mk 20 (Sniper Support Rifle). 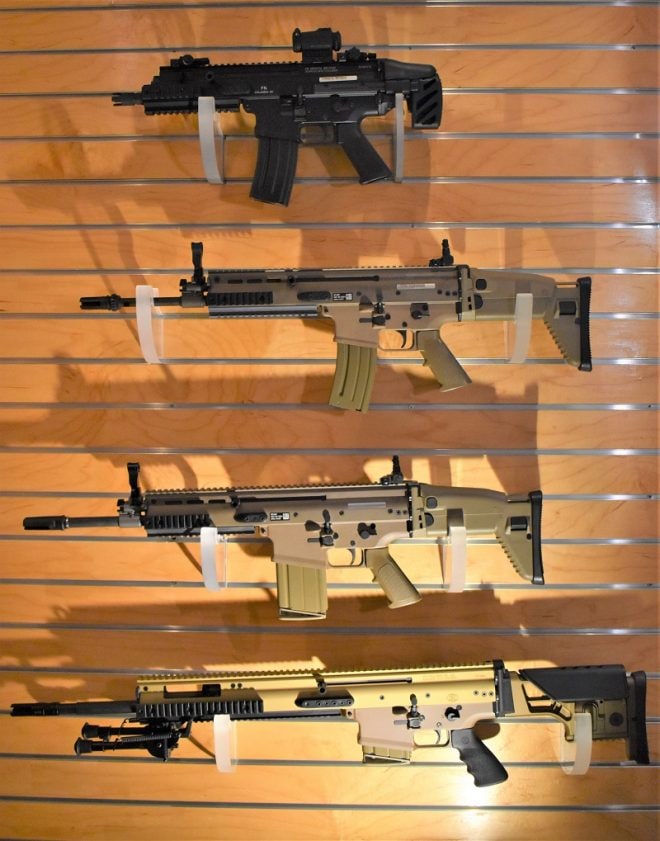 The rifles share in some cases as much as 85 percent of the same parts between models, making them easier to maintain across the family. Here we see, from top to bottom, the subcompact 7.5-inch barreled SCAR SC, SCAR 16 (SCAR-L) in 5.56 NATO, SCAR 17 (SCAR-H) in 7.62 NATO and SCAR 20 (SSR). (Photo: Chris Eger/Guns.com)

Now, with production in the U.S., FN has been marketing the SCAR series in both select-fire and commercial semi-auto variants, and have proved to be a hit with those looking to upgrade from ARs, in a choice of FDE or black.

The 5.56 NATO SCAR 16S is a semi-automatic version of the modular rifle used in combat by the U.S. military since 2009. The SCAR 16S features a rotating and locking bolt, short-stroke gas piston, free-floating cold hammer-forged MIL-SPEC 16.25 barrel with compensator and chrome-lined bore, telescoping polymer stock with adjustable cheekpiece, and ambi safety and magazine release. This rifle’s hard-anodized monolithic aluminum receiver has an integrated Picatinny rail and three additional accessory rails.

The SCAR 17S has much the same features and layout as the smaller SCAR 16S but comes in 7.62 NATO.

With a longer 20-inch barrel, the SCAR 20S is the semi-auto version of the FN SCAR Mk 20 SSR precision rifle. It includes a match-grade two-stage trigger that breaks crisply at 3.5-4.5 pounds, full-length MIL-STD 1913 rail at 12 o’clock position, and fixed buttstock providing adaptability to fit each user’s needs through the adjustable length of pull and cheek rest height.

As for a commercial version of the super cute and compact SCAR SC, perhaps with a pistol brace, FN tells us they can’t comment on such an animal at this time. One can wish, anyway. 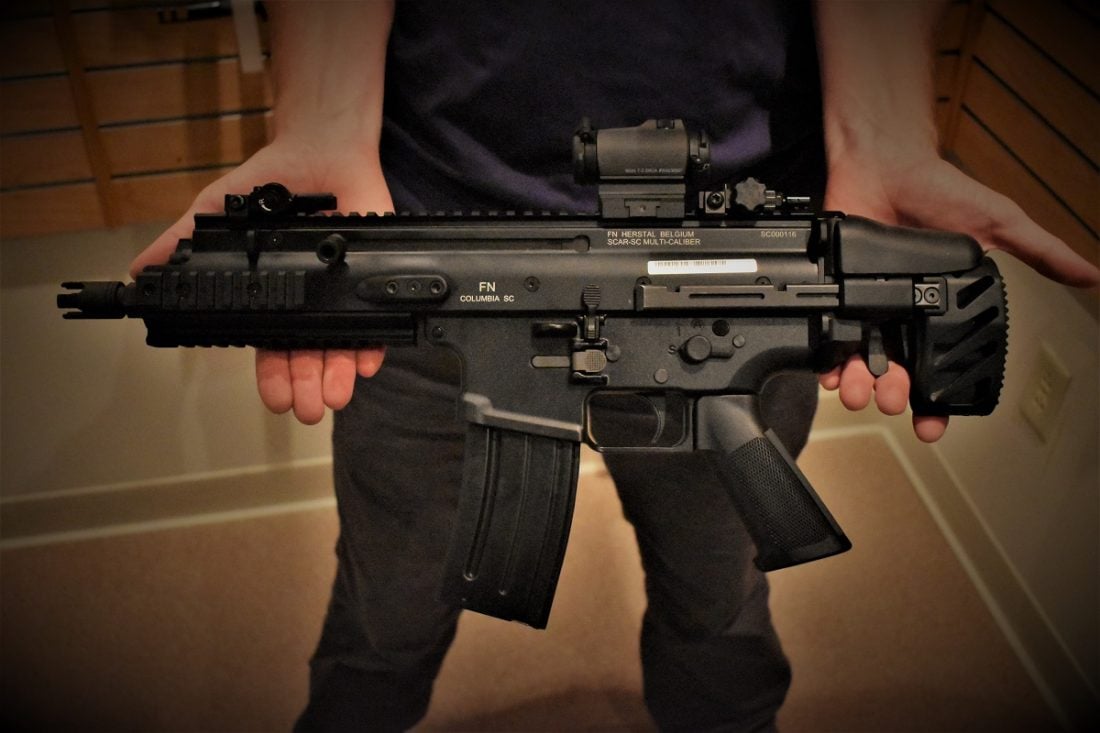