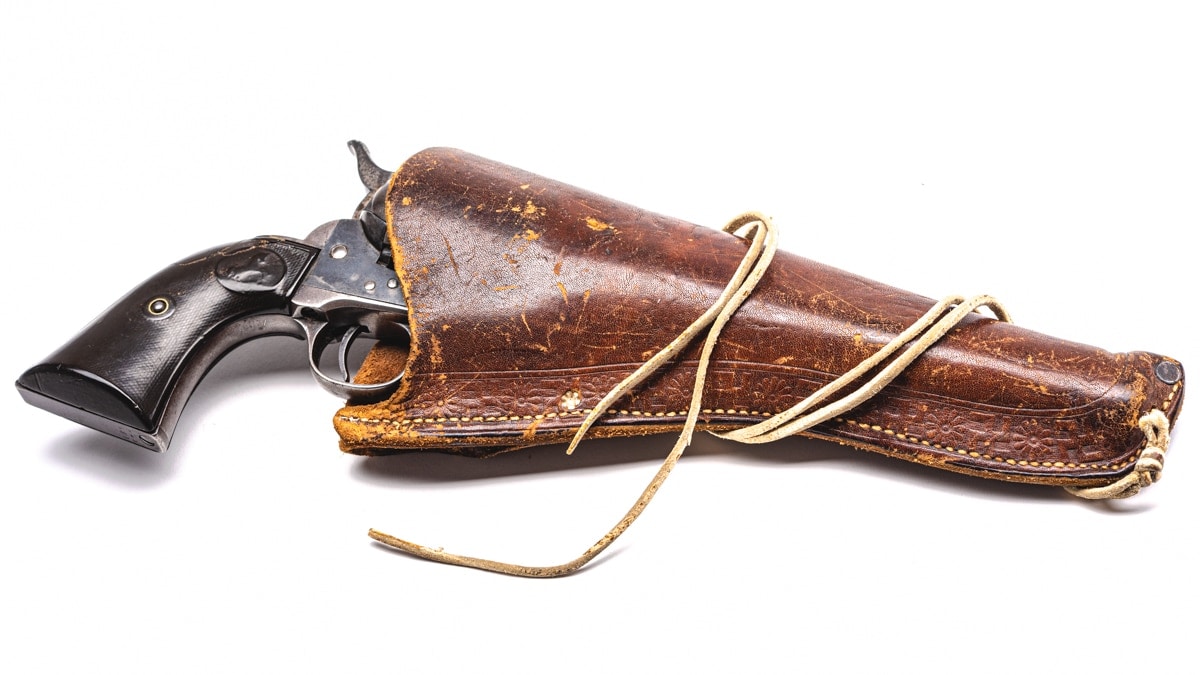 Call it the Single Action Army, Colt 1873, or Peacemaker, the iconic Colt .45 has been a crowd-pleaser for over 140 years. (Photo: Richard Taylor/Guns.com)

When Colt’s Firearms introduced a new cartridge revolver in 1873, heads turned, and history was made.

Samuel Colt’s iconic revolver works peaked during the Civil War while the inventor and founder himself passed away in 1862. This left his company behind to try and compete against other revolver makers (looking at you, Smith & Wesson) who were using Rollin White’s breech-loading cartridge wheel gun patents. Once White’s patent tanked in 1870, William Mason and Charles Brinckerhoff Richards at Colt filed patents for their own Model 1871-72 Open Top revolver. 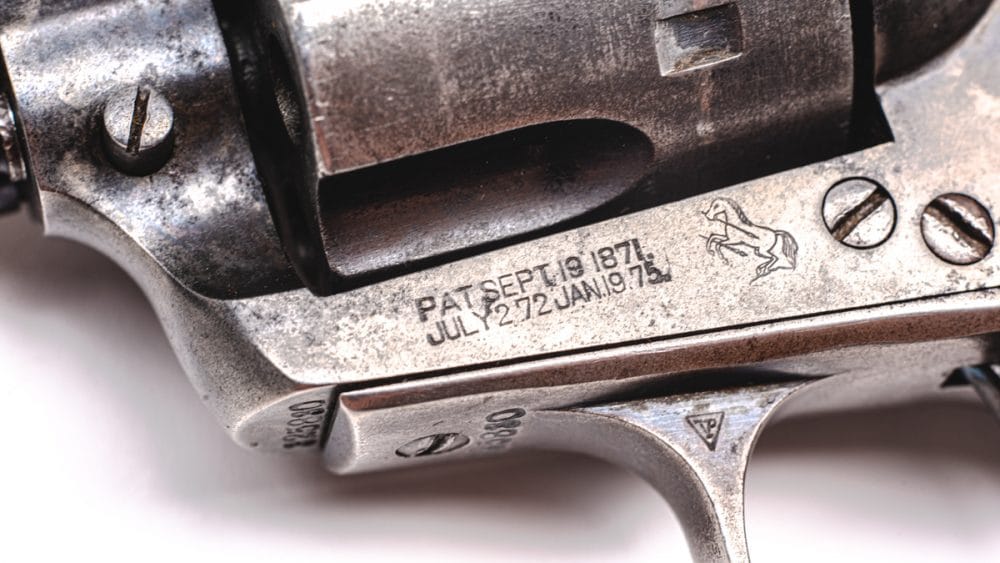 This six-shot single action, chambered in the same .44 Rimfire cartridge used by the Henry lever-action rifles of the day, soon morphed into a chambering in Colt’s new centerfire black powder .45 cartridge and submitted for a new U.S. Army handgun contract to replace older cap-and-ball revolvers. The new long-barreled six-shooter, with its .45 Colt chambering, was adopted in 1873 by the Army with an initial order of 8,000 revolvers. Eventually, this would grow to some 37,000 guns.

This early Colt Single Action Army, SN 5405, has an 1874 production date and U.S. military stamps. It was turned over by Native American Chief Sitting Bull to the Canadians and is now in the Canadian War Museum (Photo: CWM)

These guns, termed the M1873 by the Army and the Model P internally by Colt are today best known as the Single Action Army or SAA, although they have also been called the “Peacemaker,” the “Frontier Colt,” the “thumb-buster,” and the “equalizer” over the years, and for good reason.

While the U.S. Army had used a myriad of handguns during the Civil War, the SAA remained standard through 1892, making it the go-to Old West era sidearm, seeing service in the Indian Wars. Notably, “regulars” often continued to carry the SAA for decades after it was replaced by more modern double-action revolvers, continuing to see service as late as 1909. When future President Theodore Roosevelt resigned his position as Assistant Secretary of the Navy in 1898 to form a volunteer cavalry regiment filled with cowboys and adventurers, he equipped his “Rough Riders” with the Colt .45. 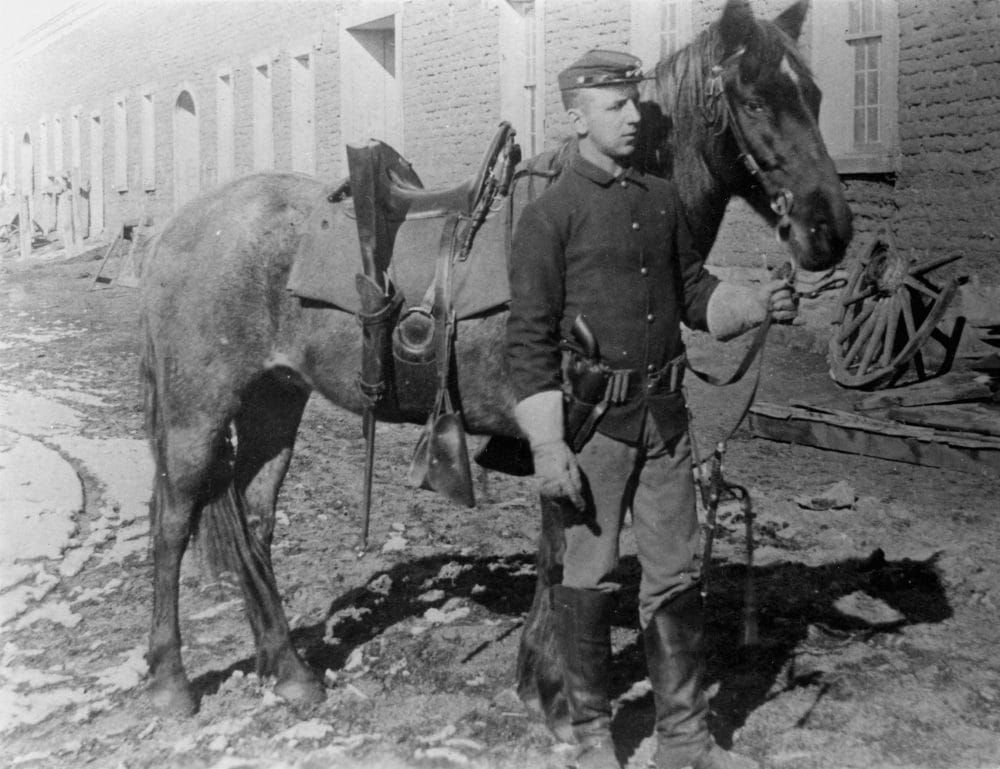 Popular on the commercial market at the same time, the Peacemaker filled hands, holsters and store shelves across the country. Famous frontier lawmen including Wild Bill Hickok, Wyatt Earp, and Pat Garrett used the Colt as did those on the other side of that line. Several famous 1920s and 1930s Texas Rangers (e.g. Capt. Tom Hickman) even continued carrying customized Peacemakers long after reliable semi-autos such as the M1911 had been introduced. 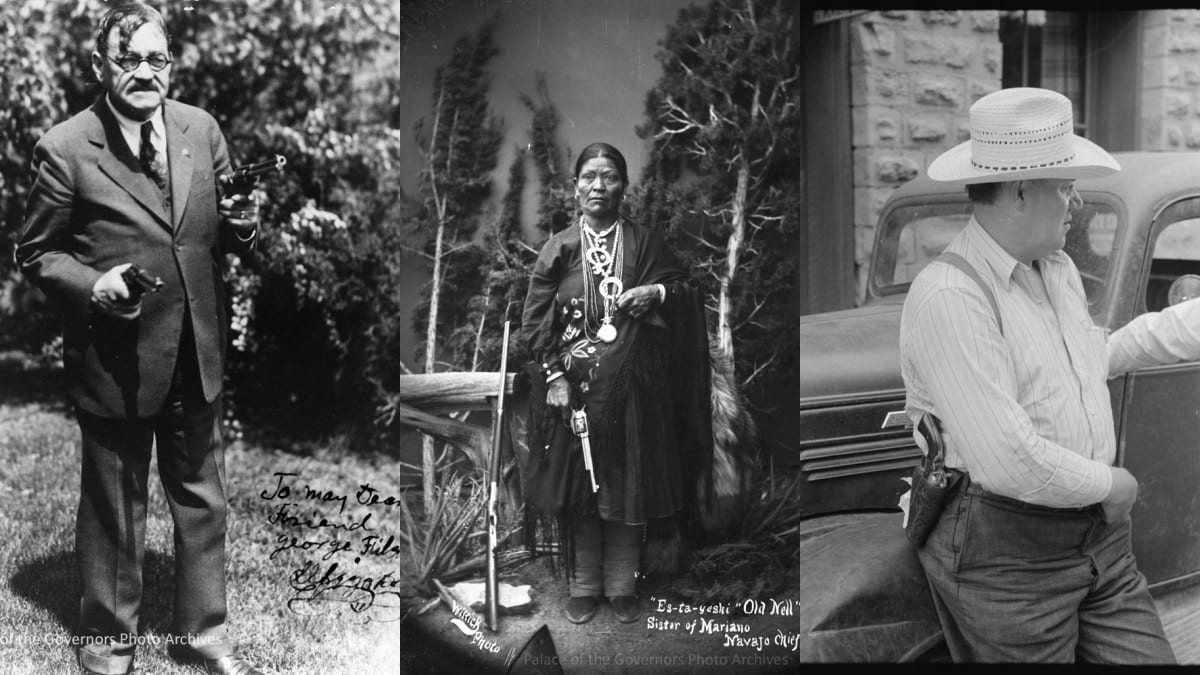 Here we see Elfego Baca, noted Old West lawman in 1930; Es-ta-yeshi (Old Nell or Nelly), Sister of Mariano, Navajo chief in 1886; and the Sheriff of Mogollon NM in 1940; all with their Colt SAAs (Photos: Palace of the Governors Photo Archives, New Mexico History Museum, Library of Congress)

Modern-era Colt SAAs, made with improved steel and heat treatment, started in 1895 with serial number 165,000. In all, first-generation Colt 1873s remained in production until around 1940 with something on the order of 327,000 commercial guns produced in addition to military contracts.

While a young U.S. Army cavalry officer posted to El Paso in 1916, Lt. George S. Patton for $50 special ordered a Colt SAA, serial number 332088, although his unit was issued with Colt M1911s. Equipped with a 4.75-inch barrel and ivory grips with a volant eagle, he carried his Peacemaker through the Mexican Punitive Expedition, and both World Wars. 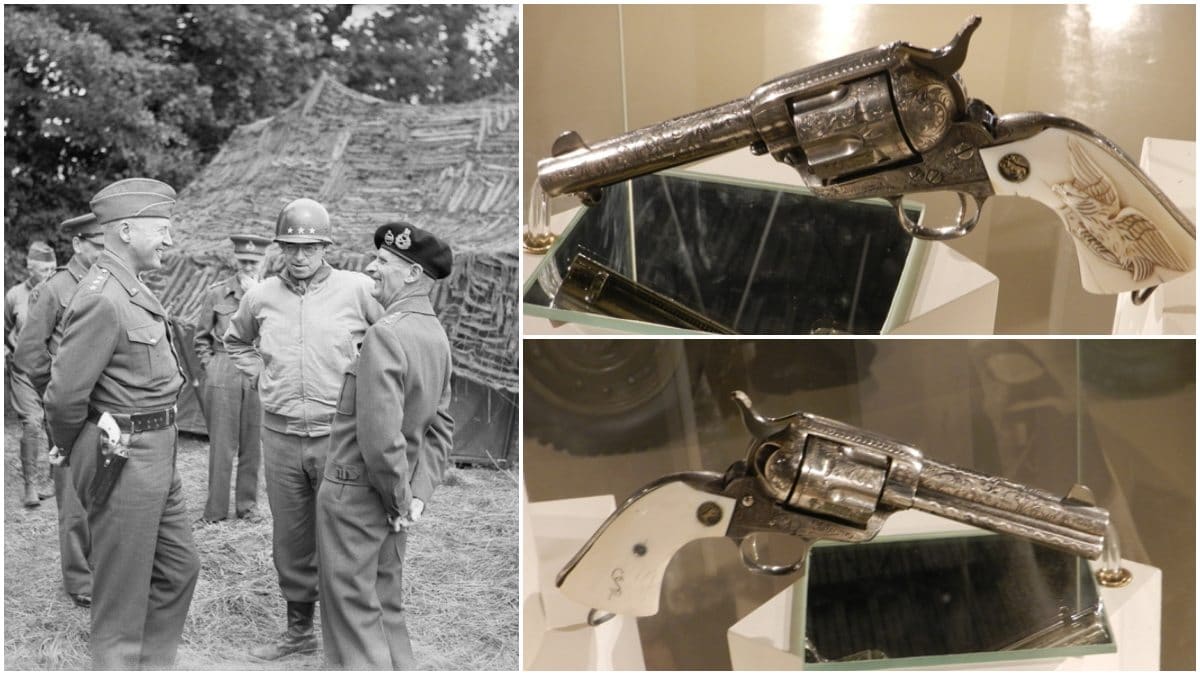 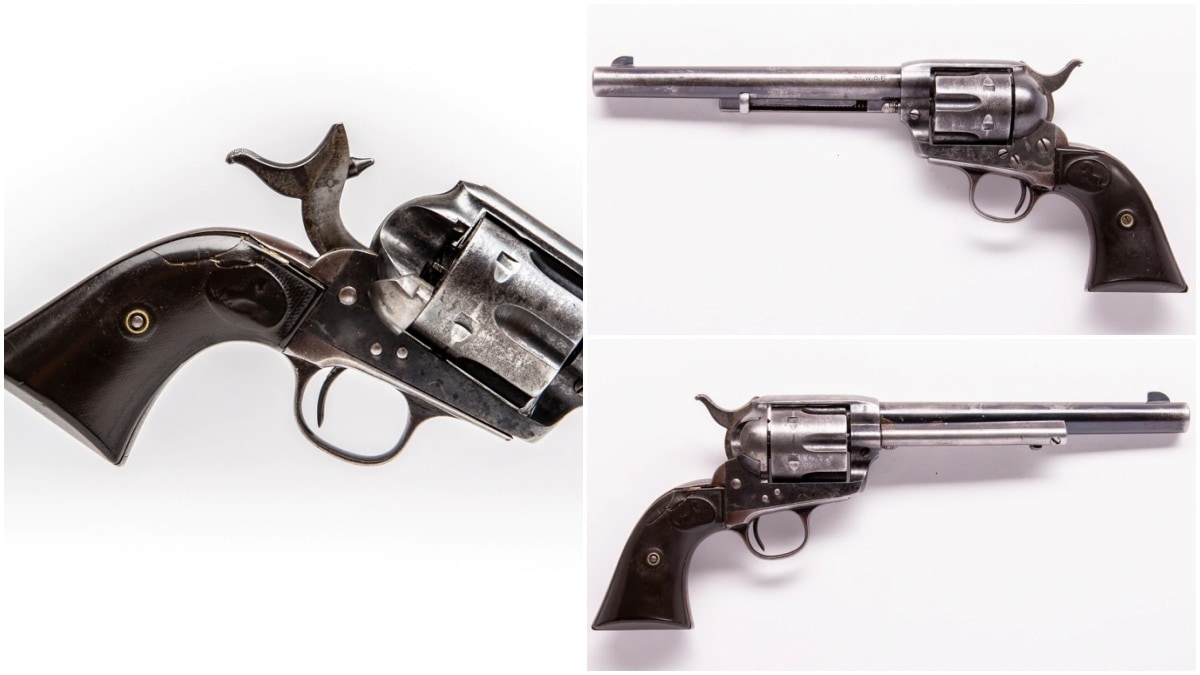 This beautiful 1st Generation Colt Single Action Army up for grabs in the Guns.com Vault has matching serial numbers in multiple places and dates to 1913. Chambered in .32-20, it is marked .32WCF on the 7.5-inch barrel. This is an important transitional model that designed with a stronger, modern frame to fire smokeless powder but still had many of the attributes of the earlier black powder SAAs including the placement of the serial numbers on the trigger guard and backstrap, one of the last in the series to have such features. It also comes with a period leather holster. (Photo: Richard Taylor/Guns.com) 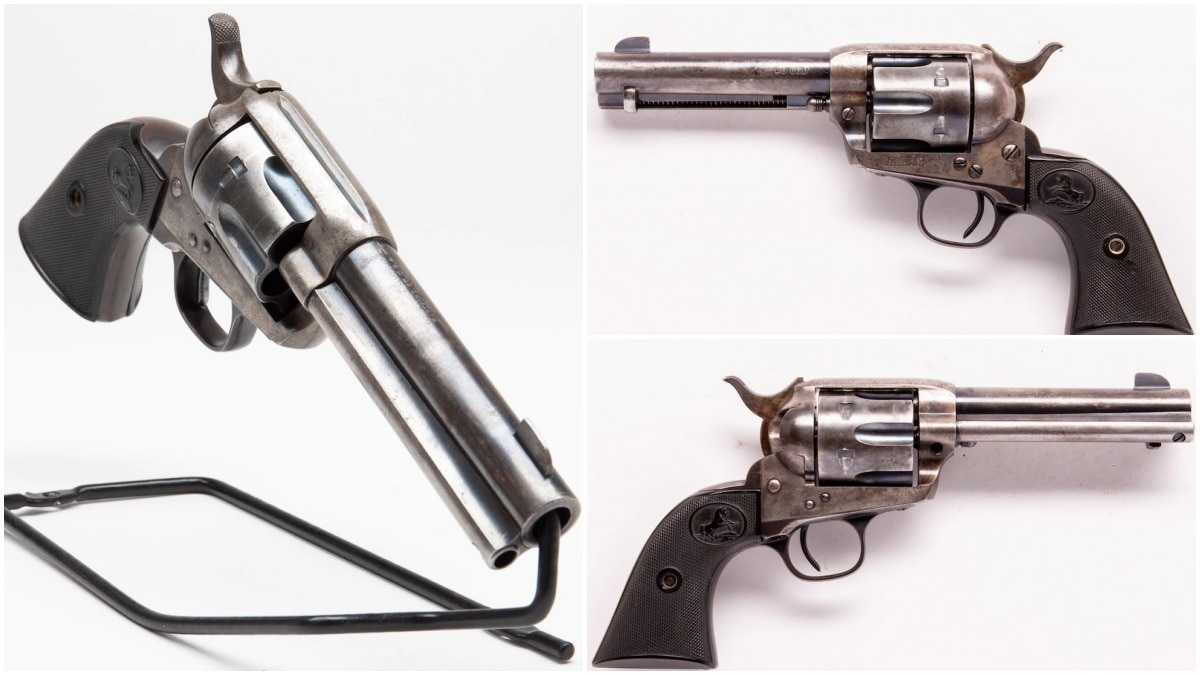 Another 1st Gen Colt SAA looking for a home in the Guns.com Vault has a serial number, 334744, which puts its production as 1916– the same year at Patton’s gun. Like his, it is chambered in .45 Colt and has a 4.75-inch barrel, although it is not as flashy. It includes a Colt Historian’s Letter.

During World War II, the Peacemaker fell out of regular production as Colt was occupied with wartime contracts. Following the conflict, the most popular shows on the television sets of the era were Westerns, sparking a renewed interest in the “cowboy” gun. With this, Colt returned the SAA to the assembly line in 1956, producing 2nd Generation guns not only in .45 but in more modern rounds like .44 Special, .38 Special and .357 Magnum. 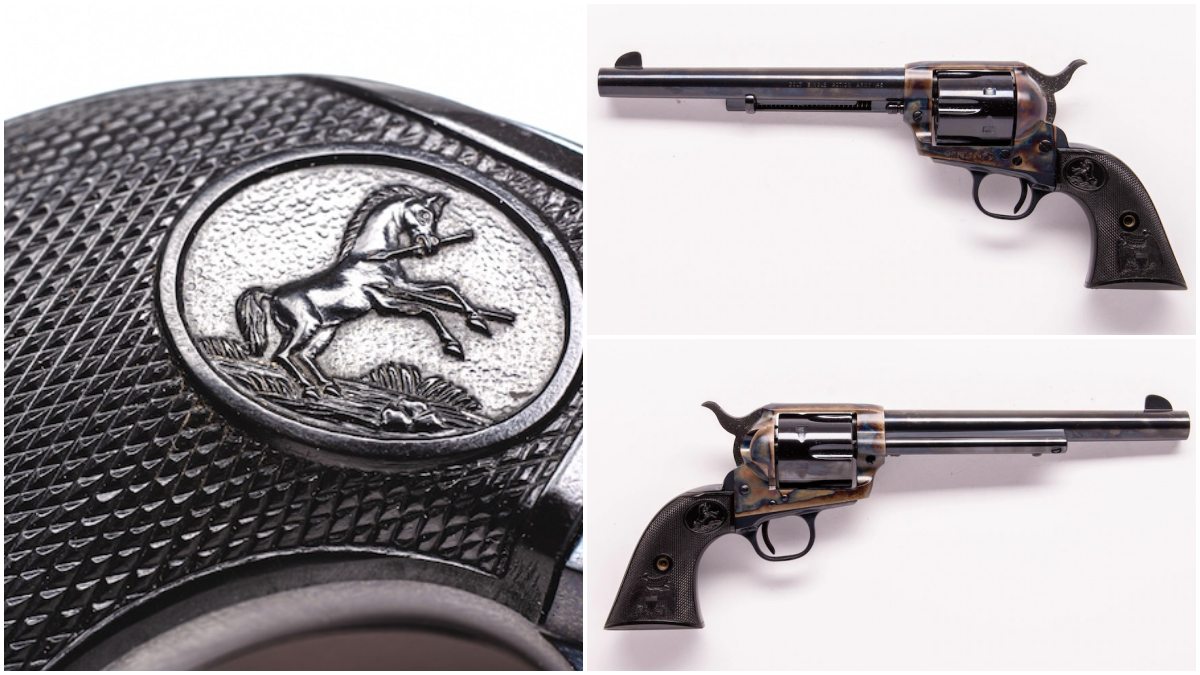 This 2nd Generation Colt Single Action Army Mid-Range looking for a home has a serial number, SN 44403SA, that dates it to 1967. Chambered in .45 Colt, it is in excellent condition and includes the original black wood grips with a volant eagle shield. This gun was born during the SAA’s great rebirth at the height of the “Gunsmoke” era which rekindled the design’s popularity on the commercial market.

By 1976, the updated New Model Colt Single Action Army, best known as the 3rd Gen SAA, kicked off and has remained in production. 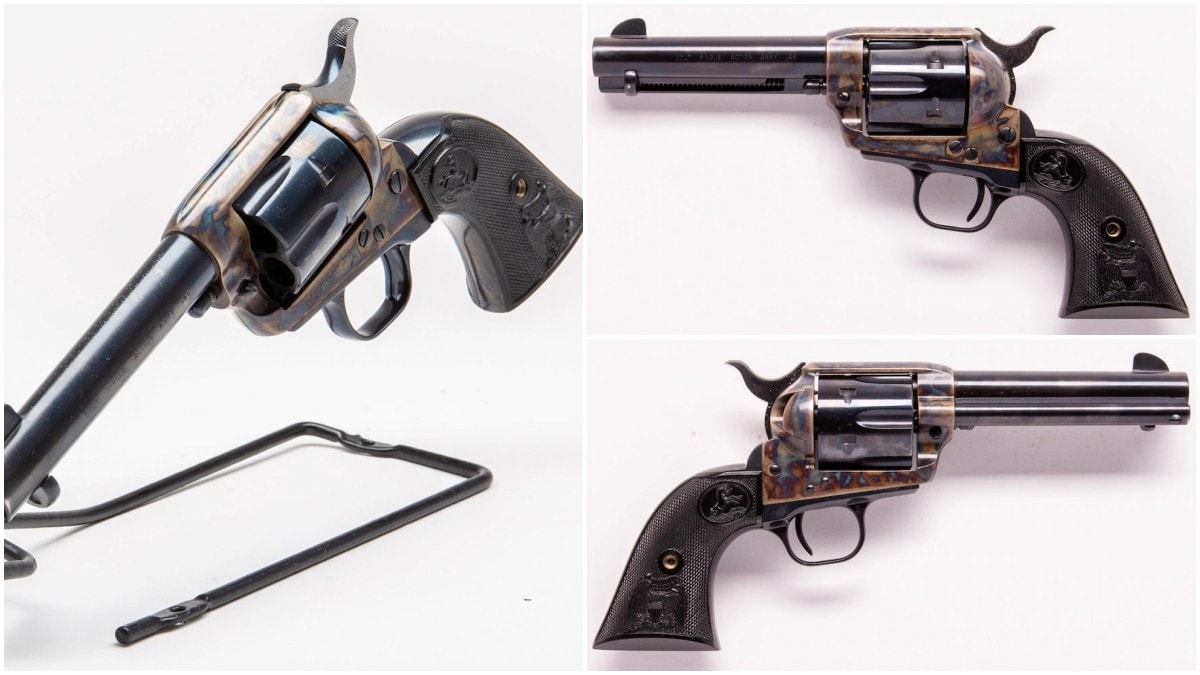 This early 3rd Generation Colt Single Action Army in the Guns.com Vault has a serial number, 99194SA, which dates it to 1978. Chambered in .45 Colt with a 4.75-inch blued barrel, the gun has a distinctive factory color case hardened finish on the frame. Grips are polymer Colt black eagles typical for the gun’s period.

Today, the SAA remains in standard production not only with Colt but also in clones made by U.S. Firearms, Great Western, Ruger, Cimarron, Uberti, and others with prices ranging from $300 to $3,000.

In short, it looks like the Peacemaker is still a long, long way from retiring from the trail.