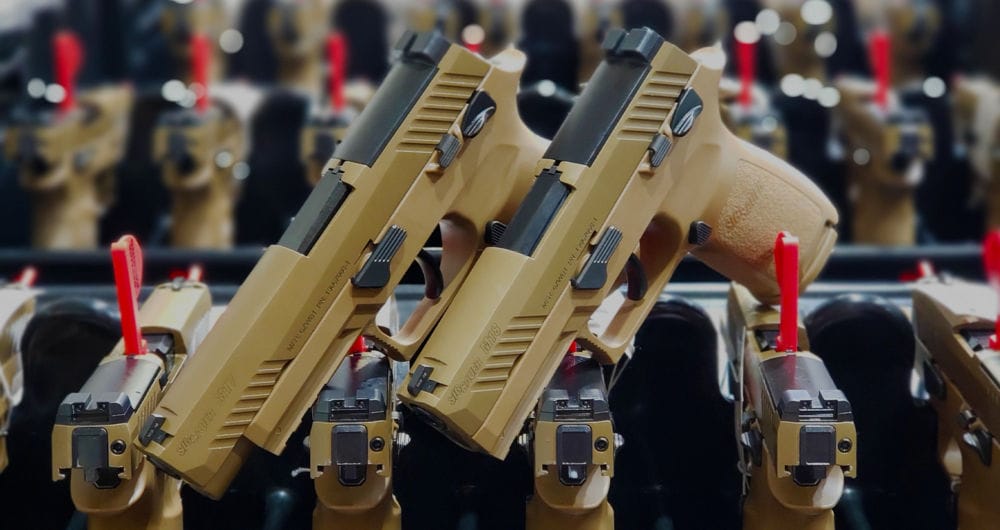 Sig won the Army’s MHS contract in early 2017 and has since gone on to supply the gun to every branch of the military. (Photo: Sig Sauer)

New Hampshire-based Sig Sauer announced last week that they have reached a milestone in delivering new pistols to the U.S. Armed Forces.

Since winning the contentious Modular Handgun System contract in 2017, beating out big-name pistol makers from around the globe to replace the M9 Beretta, Sig has exceeded performance standards and recently delivered the 100,000th MHS series gun to the military.

“In the month of October, Sig Sauer exceeded our manufacturing requirements by 30 percent and delivered a record-setting 12,100 handguns to the U.S. Military to achieve this historic milestone for Sig Sauer and the MHS program,” said Ron Cohen, the company’s President & CEO. 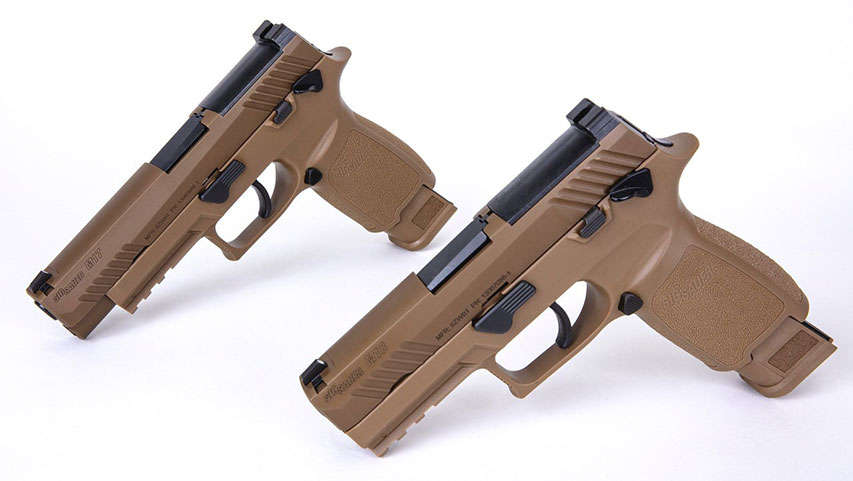 The MHS system consists of the compact-sized M18 pistol, foreground, as well as the more common full-sized M17, and a raft of Winchester-supplied companion ammo loadings. (Photo: Sig Sauer)

The MHS system comprises the Sig Sauer M17 full-size, and M18 compact handguns, each based on the company’s P320 series pistols, as well as Winchester Ammunition’s 9x19mm M1152 Ball, M1153 Special Purpose, and M1156 Drilled Dummy Inert cartridges. Over the coming five to seven years, upwards of 350,000 handguns and 100 million rounds of ammunition are scheduled for delivery to the Pentagon.

Adopted by Every Branch

While the Army is the primary user, with a reported 231,586 MHS pistols — mostly M17s — ordered over the past three years, the platform is also being acquired by the rest of the U.S. military as well. As noted in the Navy’s FY 2019 procurement budget justification for the Marine Corps, 35,000 M18s will not only replace aging M9 Berettas but also the Colt M45A1 CQB .45ACP railgun and the newly-acquired M007 Glock.

The Air Force is also going all-M18, using the compact 9mm to phase out their M9s and M11s, the latter a version of the Sig Sauer P228 used by the Air Force Office of Special Investigations. Further, the M18s ability to use blank firing kits and Simunitions will allow it to replace the venerable .38-caliber Smith & Wesson M15 revolver, which is still used to train military working dog teams.

In addition, the Coast Guard reportedly has contracts for the MHS system as well.

“With the strict accuracy and acceptance specifications that the M17 and M18 are continuously exceeding, it’s clear that the success of this program can be directly attributed to the reliability, durability, and accuracy of the handgun, which has resulted in the high demand for both the M17 and M18 from every branch of the U.S. Military,” said Cohen this week.