There’s not much that hasn’t been done in the rimfire world, but somehow, Winchester has managed to put out an innovative new rifle. Here’s what you need to know about the Wildcat design and whether it stands a chance against the test of time. 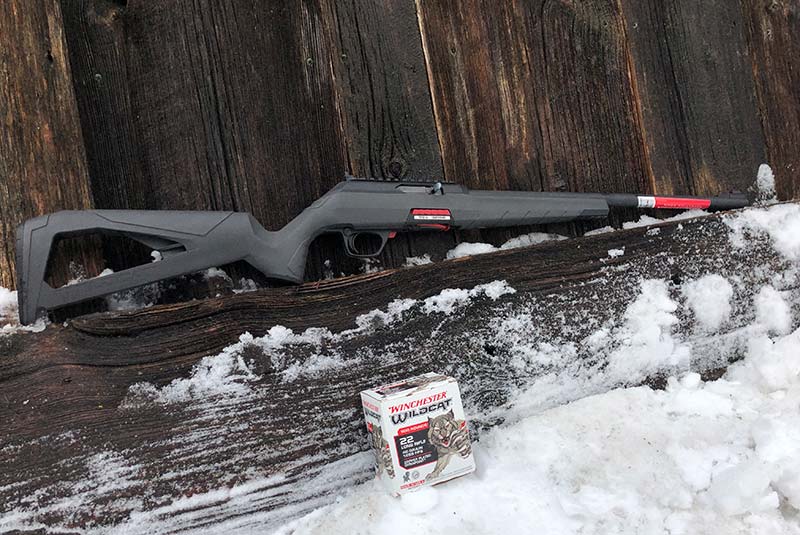 MSRP on this 4-pound semi-automatic rimfire rifle is a sleek $249.99. (Photo: Kristin Alberts/Guns.com)

SHOP WINCHESTER WILDCAT
The newest Long Rifle rimfire on the block is a new-age looking semi-automatic rifle named after the old brand of rimfire ammunition made by the company—and that ammo returns in conjunction with the rifle. That’s where the nostalgia ends, however.

This repeater uses a striker-fired, blowback action. The button-rifled chrome-moly 18-inch sporter weight barrel wears a recessed target crown and is fed by a rotary magazine. A skeletonized black polymer stock is simple and modern with plastic buttplate, Picatinny rail and trigger guard. Polymer is undoubtedly the name of the game, right down to the polymer “iron sights” and molded sling swivel mounts. 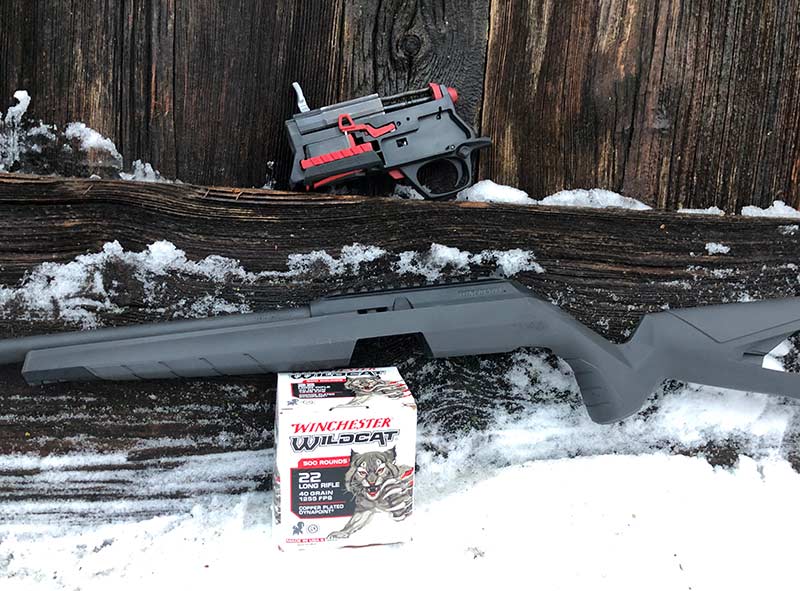 Depressing the red button at the rear of the upper mechanism releases the rifles’ internals for cleaning or maintenance.

New features aside, the Wildcat just might be the easiest semi-automatic rifle to disassemble and clean. With the magazine removed and rifle unloaded, depressing the bright red slimline button at the rear of the upper mechanism releases the rifles’ internals for cleaning or maintenance. The lower receiver drops completely free of the upper.

Winchester even includes a set of Allen wrenches in a molded section of what we’ll call this lower receiver. This pair of tools allows shooters to not only adjust the polymer molded rear aperture sight but also remove the upper barreled action from the stock. 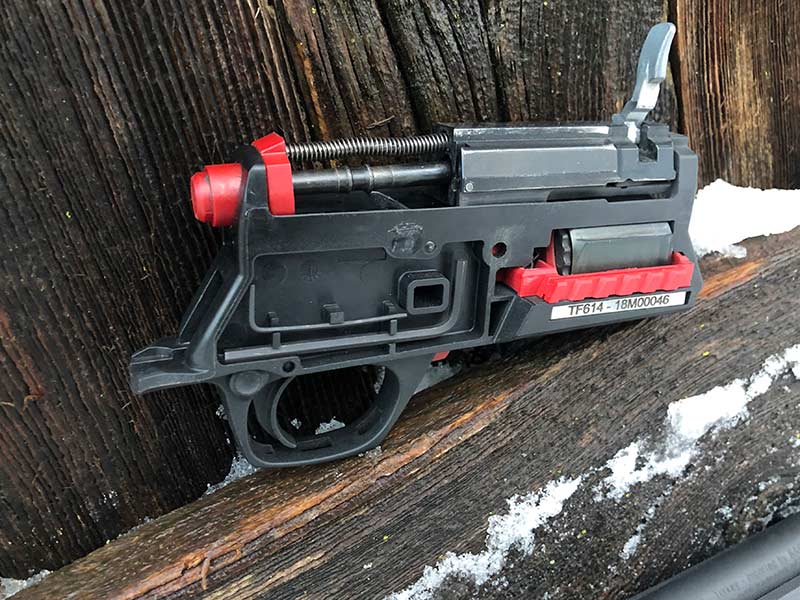 The cool thing about separating the two halves of the action means that with that single push of the release button, not only can the internals be cleaned, but the path is clear from the rear for a thorough breech-to-muzzle barrel cleaning.

Comparisons to the Ruger 10/22 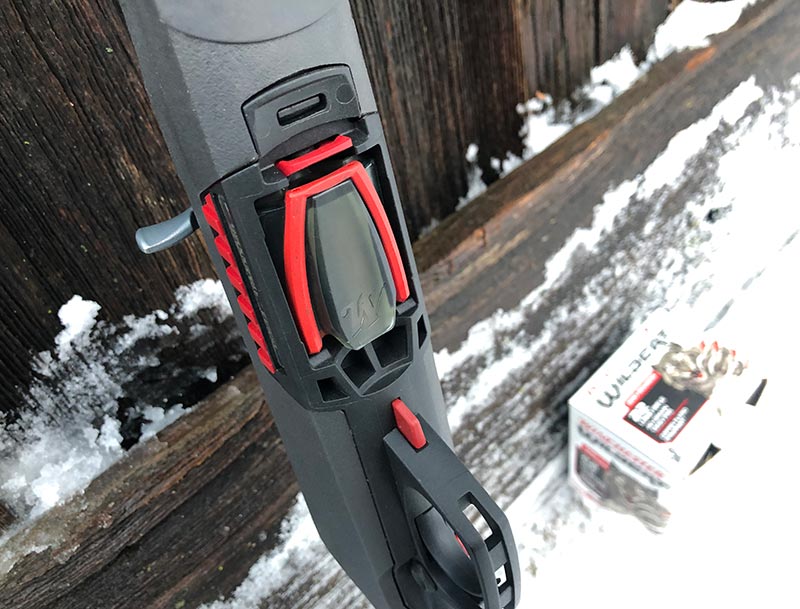 The ten-round rotary magazine is not only reminiscent of the 10/22s but in fact, is advertised to interchange. (Photo: Kristin Alberts/Guns.com)

It’s almost impossible not to compare any new rimfire rifle to the old standby Ruger 10/22. The 10-round rotary magazine is not only reminiscent of the 10/22 but, in fact, is advertised to interchange. Winchester seems to one-up Ruger on the magazine release design, opting for not one, but two ways to drop the feeder. 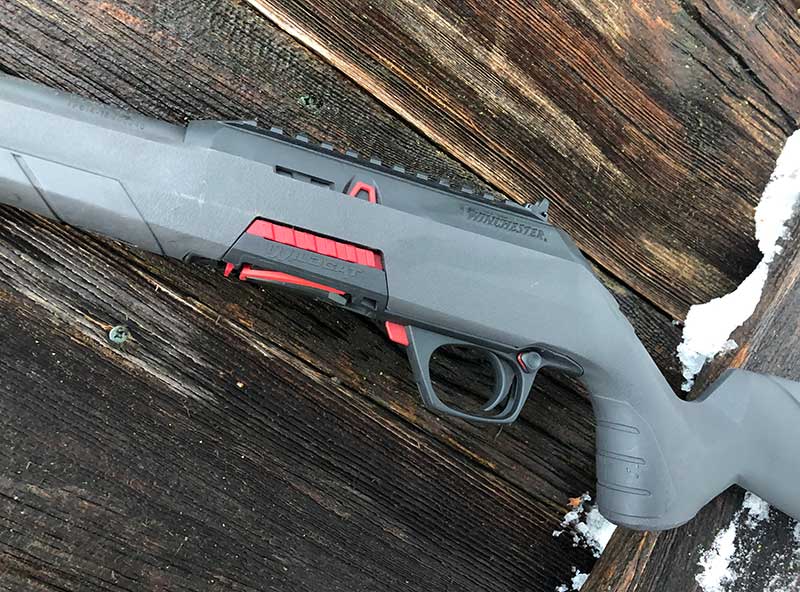 Controls are done in red, so it’s easy to find the bolt release at the left side of the receiver and slide lock at the front of the trigger guard.

Our T&E rifle’s trigger broke quite cleanly at just a hair under 5-pounds. The fully adjustable ghost ring/aperture rear sight and ramped post front, though molded and feeling a bit on the chintzy side, actually moved well and kept us on target. Shooters and hunters who like to accessorize will appreciate the molded rail at the front of the forend. That particular feature is so well hidden with its included cover that only close inspection reveals the thoughtful addition. The oversized cross-bolt safety, also polymer, was easy to actuate throughout our range time. 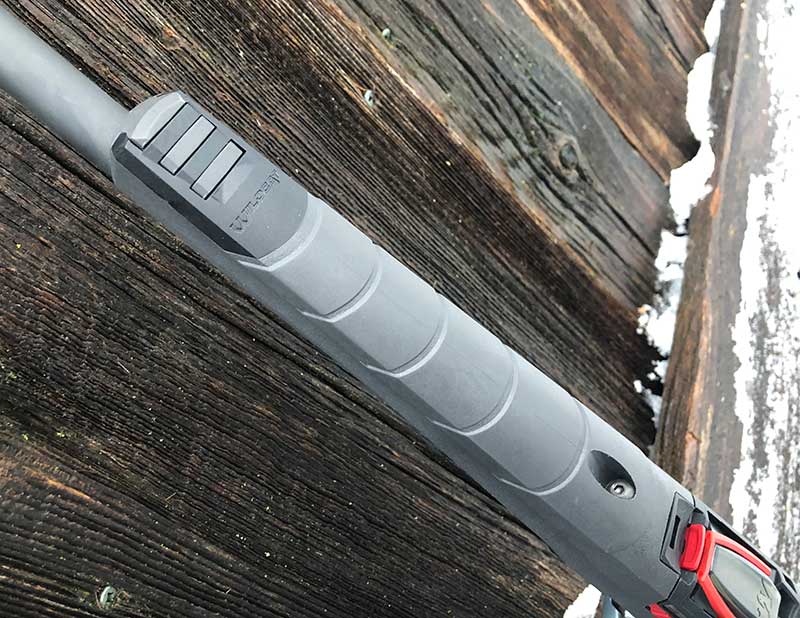 The Wildcat includes a molded rail at the front of the forend. (Photo: Kristin Alberts/Guns.com)

We fired a nice mix of ammunition, from premium to utilitarian, including Federal Premium Hunter Match 40-grain HP, Aguila Super Extra 40-grain Copper and Lead, Browning BPR 40-grain and of course, Winchester’s reboot of Wildcat rimfire white-box ammo in 40-grain lead RN. Though we didn’t have the highest expectations in terms of accuracy with this lightweight rimfire plinker, the Wildcat performed. It ran with 100% reliability through all brands of ammunition.

The iron sights are not built for pinpoint shot placement, so we added a Bushnell Advance micro reflex optic to the molded-in Picatinny top rail. The Wildcat easily shoots minute-of-squirrel at 50 yards. Slowing down the shot strings certainly added to overall accuracy, but even with more rapid-fire and the optic, a prairie-dog target at that distance was easily handled. Best of all, the gun never had an issue with feeding, firing, or ejecting, and by the end of two days of shooting, it was far from clean. Will the polymer features last in the long run? Only time will tell. (Photo: Kristin Alberts/Guns.com)

From someone still living in the older age of heavy steel and wood, the feel of a 4-pound rifle, even in a rimfire, does not build confidence. For all the positives of the design—and they are many—there’s no good way to test the durability of a near completely polymer rifle. Still, all those moving parts, while working great now, can only prove or disprove themselves over time.

The molded sights are a nice addition and serve their purpose, but black on black can be difficult to pick-up in conditions other than full sun or bright light. The slimline pistol grip and shorter length of pull at 13.5-inches work great but might not have the desired ergonomics for larger-framed shooters. Still, the gun’s weight and dimensions make it incredibly wieldy and enjoyable.

Though the new Winchester Wildcat may feel like a toy with its near-full lightweight, polymer construction, that roaring cat logo reminds shooters the gun is legit. Partnered with a host of innovative design elements, this rifle piques interest. We’re intrigued enough to go out and get one for more enjoyment on the range and in the field.

Make sure to shop Winchester and other great new and used firearms on Guns.com.