The “aristocrat of big-bore semi-auto pistols,” the .44 Auto Mag was ahead of its time, and squarely behind the 8-ball when it came to luck.

Designed by unsung firearms genius Harry Sanford, the .44 AMP cartridge was born in the late 1950s. Devised with hunting in mind, the round has almost the exact performance envelope of a .44 Rem Magnum except that the Auto Mag is rimless so that it could be fed and extracted through a very specially designed semi-auto pistol.

Speaking of which, Sanford and Max Gera worked on the semi-auto pistol built around the cartridge for a decade, and the forward-thinking gun was perfected enough by 1969 to move into low-rate production.

The gun was a large-framed semi-auto that operated on a long-bolt short recoil system. To keep the beast of a round safely locked down, it used an eight-lug rotating bolt that resembles the kind found on M16/AR15 rifles. A single-stack detachable magazine about the size of a pack of cigarettes gave the pistol a 7+1 capability.

The grip and ergonomics were based on the High Standard HD target pistol while the takedown method and control surfaces were similar to those of the Walther P38.

Over-engineered and complex, the Auto Mag required methodical attention to detail and craftsmanship at all stages of the manufacturing process. Extensive use of machining and stainless steel created a solid gun that tipped the scales at almost four pounds.

The Auto Mag’s 6.5-inch barrel gave it a length from muzzle crown to hammer spur of just a tad under one-foot. This had the effect of making it about the same size as the six-shot S&W Model 29 .44 Magnum revolver while offering better handling, a longer sight radius, two extra shots with a quicker reload if needed and improved recoil. 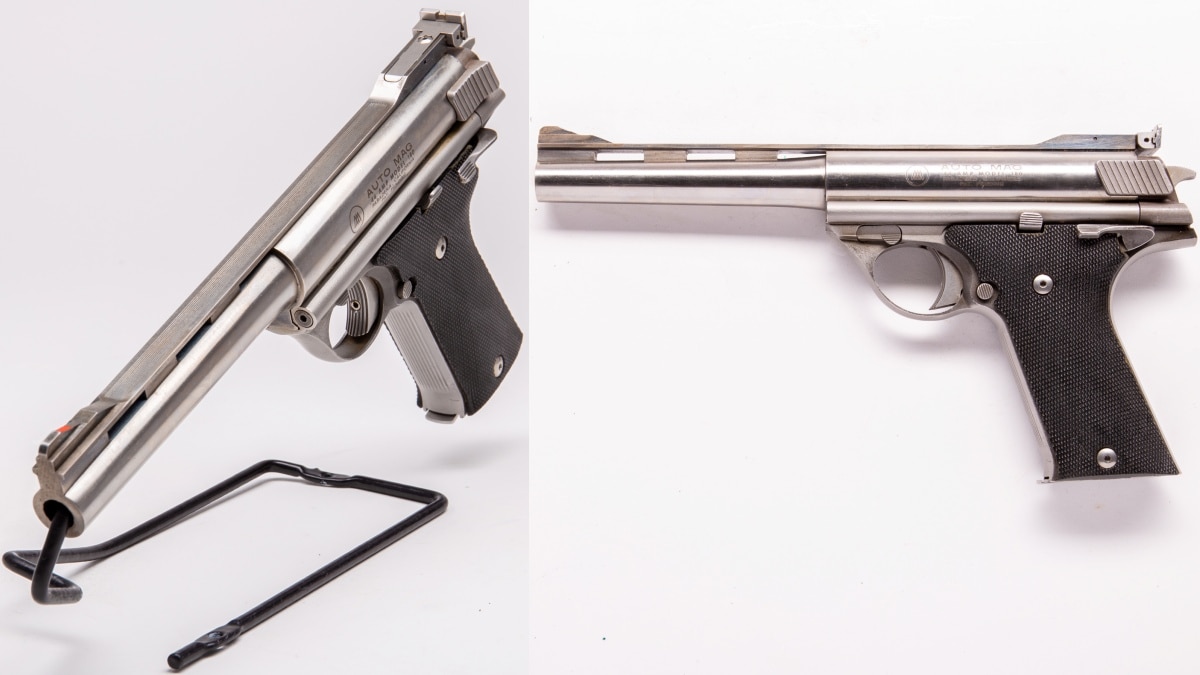 One of the original rare Auto Mag pistols produced in Pasadena, California in the early 1970s, this amazing example of the .44AMP-chambered hand cannon up for grabs in the Guns.com Vault is about as good as they come. 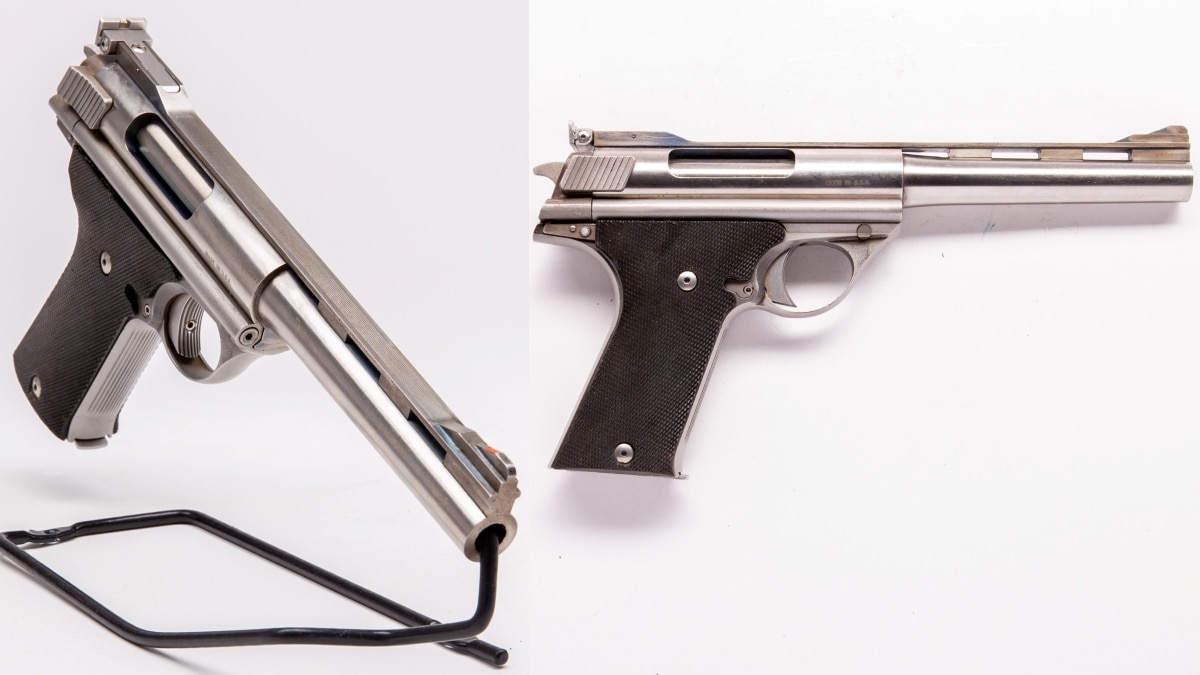 Its serial number, A01194, puts it in the early range of guns produced by the original manufacturer of the coveted classic made famous by Clint Eastwood’s Dirty Harry in the 1983 film Sudden Impact. 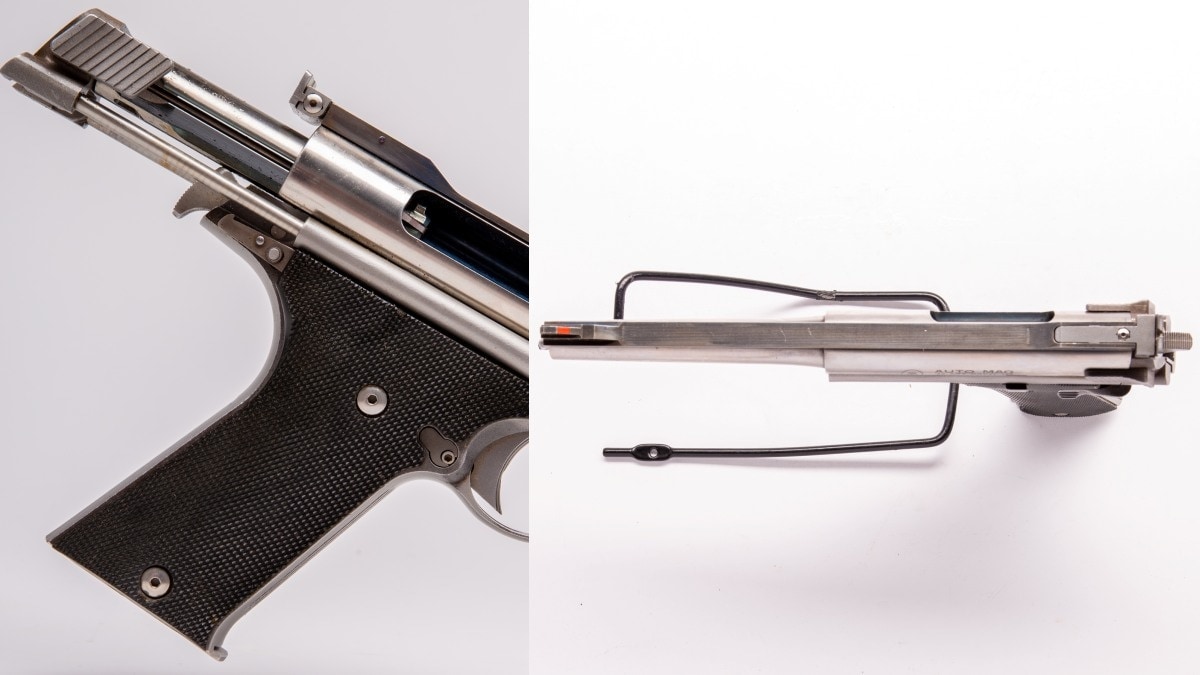 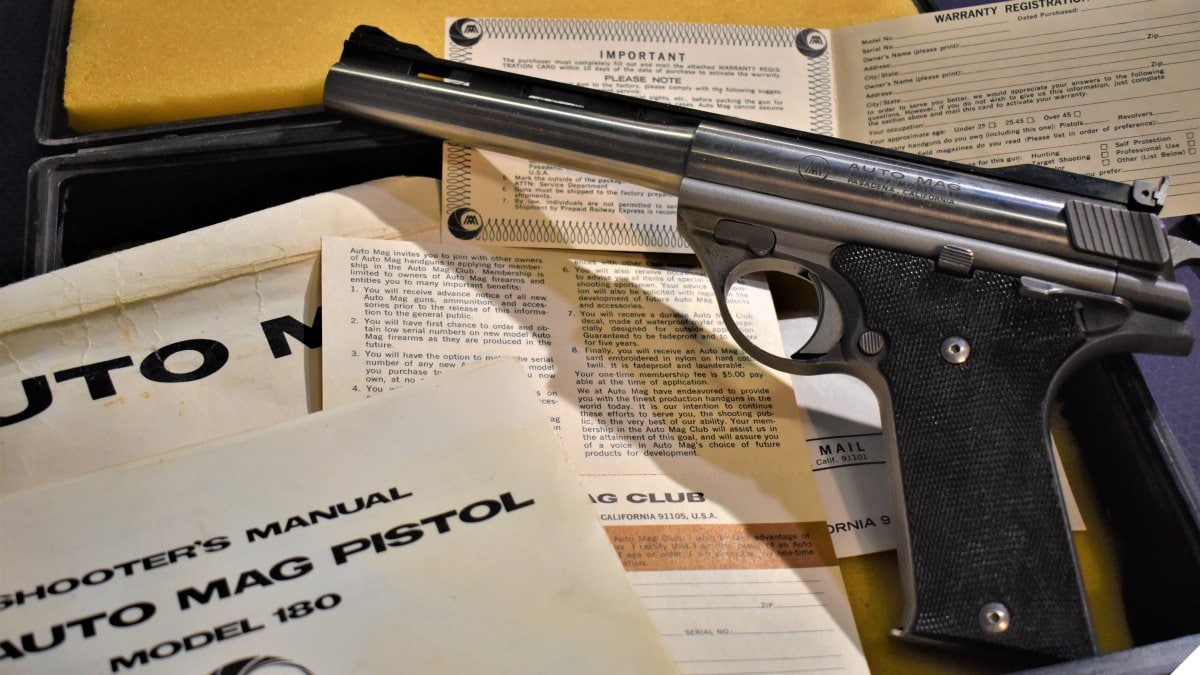 ROUND OUT YOUR COLLECTION WITH AN AUTO MAG

However, all the craftsmanship needed to pull off the Auto Mag made the pistol a losing proposition when it came to producing them at a price the market would support. Based in Pasadena, Sandford’s original Auto Mag Corporation was only in business for about two years before bankruptcy shut the line down.

While Sanford eventually went on to start Arcadia Machine & Tool (AMT) and for years sold a line of handguns billed as Auto-Mags, these were not the same hogleg of yore.

For much of the past decade, a rebooted Auto Mag company has been trying to revive the design with little market success.

Nonetheless, the Auto Mag grew into one of the most popular of unobtainable guns in history. Clint Eastwood slung the big .44 AMP in one of the Dirty Harry films as did Burt Reynolds while fictional problem solver Mack Boland trusted the gun he dubbed “Big Thunder” in hundreds of pulp fiction novels. This ensured the platform has never fallen out of favor whenever people of the gun gather to talk hand cannons.

Today the .44 Auto Mag concept has largely been eclipsed by such production rounds as the 10mm and .38 Super which provide similar firepower in semi-autos as well as the Desert Eagle which loads actual 44 Magnums (with rims).

Still, there is just something old school cool about an Auto-Mag, tactical turtleneck and sneer not included.

If you like interesting and often rare guns like the Auto Mag, be sure to check out our Collector’s Corner or look through our entire catalog of more than 3,000 new and used guns of all sorts.