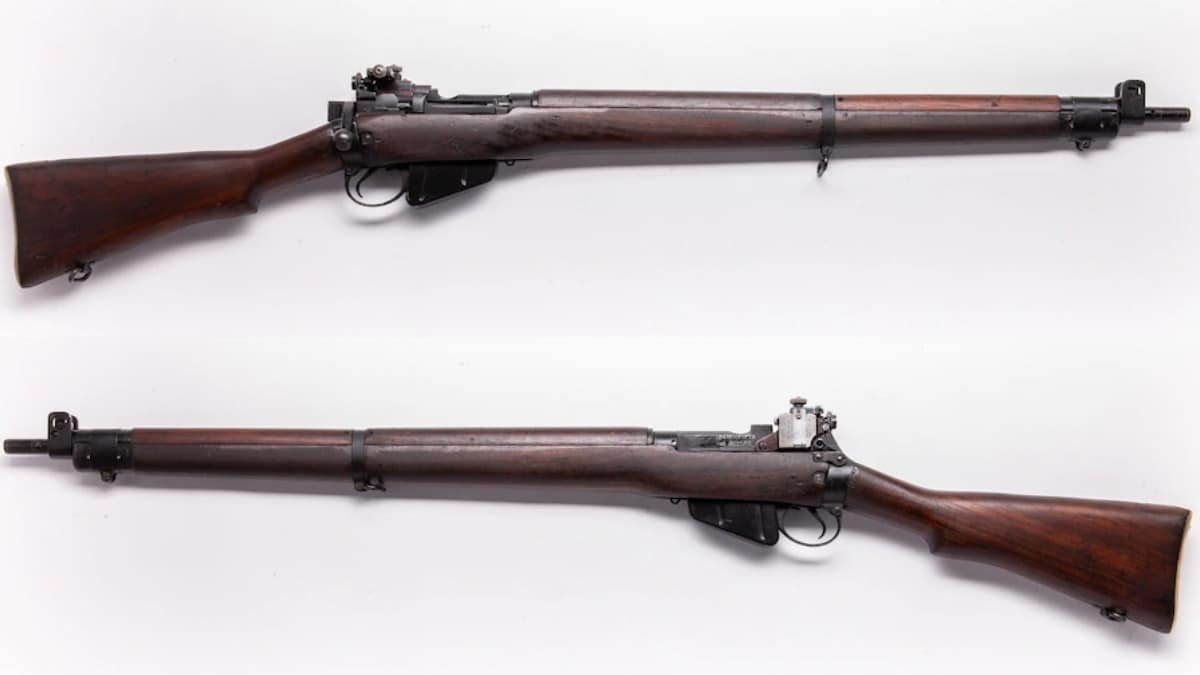 This Royal Ordnance Enfield No. 4 MKI in the Guns.com Vault is a bolt-action rifle chambered in .303 British with a 10-plus-1 round capacity. A 25.5-inch barrel is adorned with a post front sight and a national match rear sight. Developed in the early 1930s and used by British forces during World War II, the Enfield No. 4 MKI is a reliable rifle and a crucial part of Allied military history.

Police in Northern India last week said farewell to a historic infantry rifle that has served them for generations– the .303-caliber Lee-Enfield.

Police for the Indian state of Uttar Pradesh, which counts roughly 200 million inhabitants, sent their Enfields off after using them for a final time in the country’s 71st Republic-Day Parade in late January, according to local reports. The force used 45,000 vintage Enfields, the agency’s standard-issue rifle since 1947. The historic bolt-action rifle will be replaced with domestically-made INSAS and inch-pattern FAL variants.

The below shows Uttar Pradesh police with their Enfields at last year’s RP Day parade.

“This (.303) rifle is a fantastic weapon and has served us brilliantly in various operations in the past,” police director-general Bijaya Kumar Maurya told AFP. “But it being a bolt action weapon with low magazine capacity, it was time for a change. Its production has also discontinued so there was all the more need for an upgrade.”

Although replaced, the Uttar Pradesh rifles will not be completely retired, they are reportedly being sent to the Indian Ordnance Factory at Ishapore to be re-worked into riot guns.

What is the Enfield, anyway? 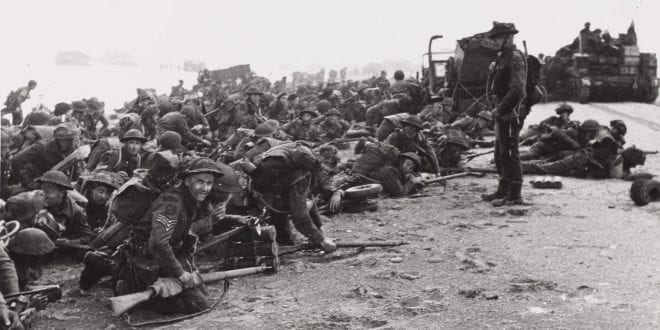 About half of the Allies that hit the beaches and landing zones in Normandy on D-Day were American, while the British and Canadians made up the other half. Note the No. 4 Enfield rifles in the hands of these Canadian troops. (Photo: British National Army Museum)

The .303 rifle was first fielded in 1895 as the Magazine Lee–Enfield, which saw service in the Boer Wars and various British colonial brush wars of the early 20th Century, then was updated by the best-known Short Magazine Lee–Enfield (SMLE) after 1907.

The SMLE MK III/III* was one of the most common rifles of the Great War and its ability to deliver “ten rounds, rapid” made Commonwealth infantry a formidable force as the rifle went on to equip not only British troops but those of Australia, Canada, New Zealand, South Africa and, of course, India. 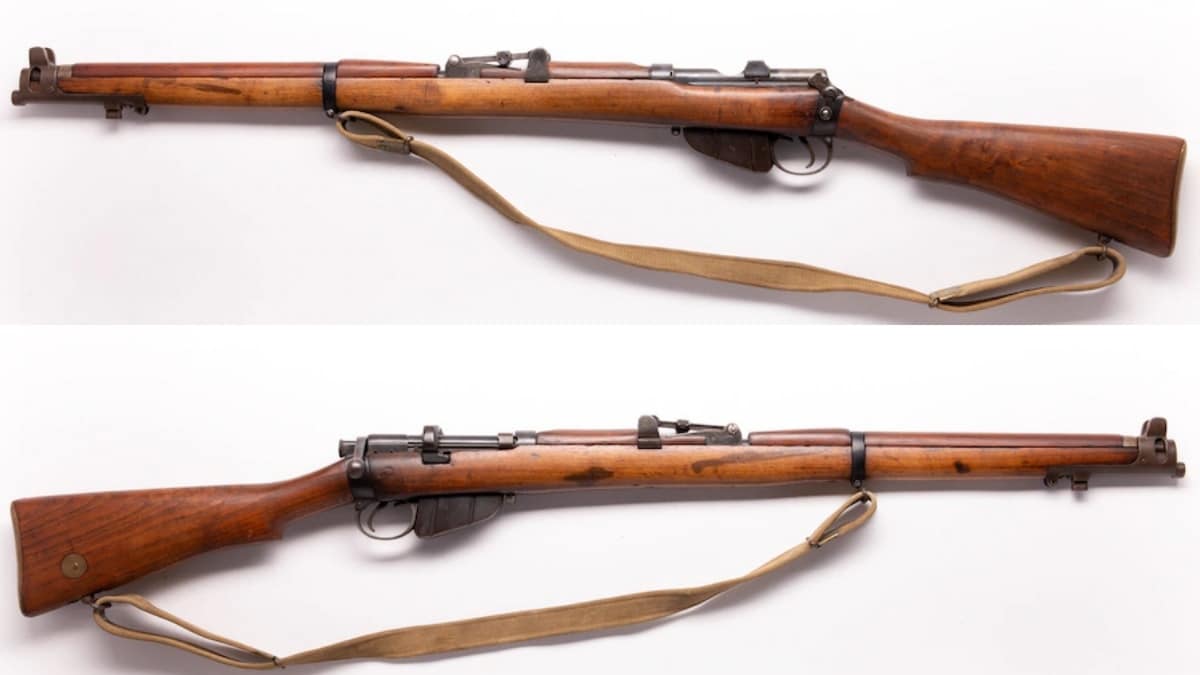 This rare BSA-produced .22LR trainer up for grabs in the Guns.com Vault is modeled after the standard SMLE MK III/III* which was the standard British military rifle for about 30 years.

By World War II, the SMLE had been further updated to the Rifle No. 4 Mk I and later No. 5 series which remained in production around the globe as late as the 1950s, including manufacture in the U.S. by Savage Arms. In India, Ishapore continued making the weapon in 7.62 NATO, dubbed the Rifle 7.62 mm 2A/1 until 1975.

A common round in factory production by Federal, Remington, and others, the .303 British has been a favorite of deer hunters in the states for decades. This means several of these milsurp rifles have been “sporterized” 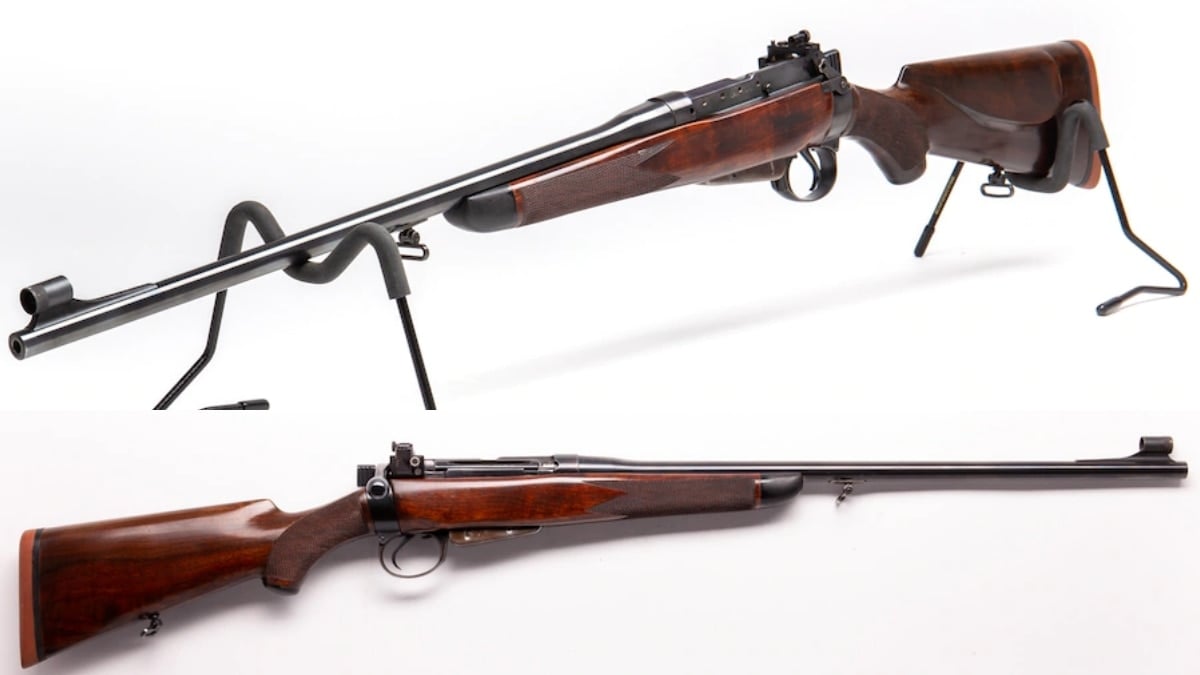 This Canadian-made Longbranch Lee Enfield No. 4 Mk I* may have seen WWII service, but long ago had its hardwood stock swapped out for a Monte Carlo-style sporter rig while its sights have likewise been updated.

To see Enfields and other classic military rifles and other vintage guns, be sure to check out our Collector’s Corner. You may be surprised by what you find.

SEE DEALS ON ENFIELDS IN STOCK