Throwback: The Gun Rack at the Navajo Lodge, 1940

Eighty years ago, a photographer captured a New Mexico lodge in time, and many of the guns on hand were classics both then and now.

In April 1940, Russell Lee, a 37-year-old prolific shutterbug who worked for the government’s Farm Security Administration, crisscrossing the country to document American life, stopped in at the Navajo Lodge along U.S. 60 in Datil, New Mexico. 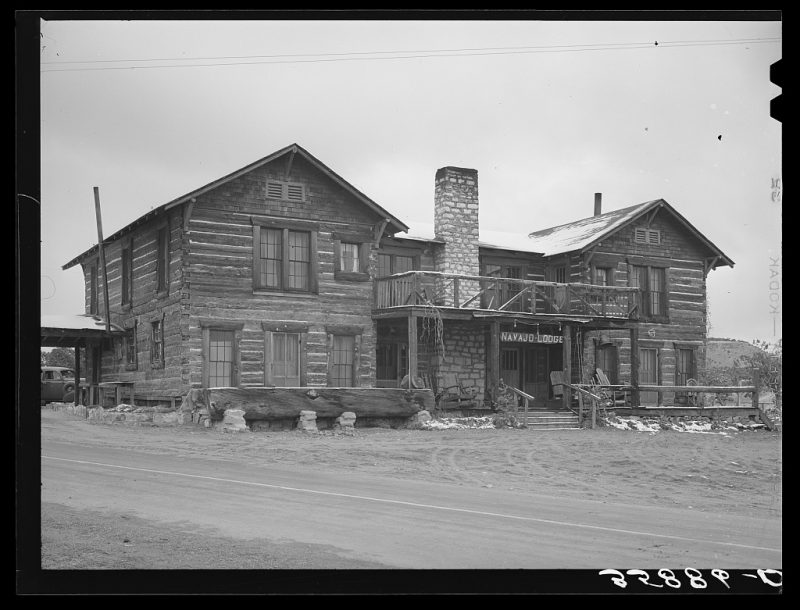 As Lee noted with the Kodak prints he filed- now in the Library of Congress– the lodge “was an old ranch house in the mountains. About thirty years ago the rancher who owned it had it dismantled and moved it piece by piece and rebuilt it at its present location. He is now dead and the house is used as a hotel principally for summer visitors.”

It looked like a pretty sweet place, a rustic remnant of the Old West filled with Navajo rugs, trophies, furniture crafted long before the days of pressboard IKEA junk, and guns. Oh, the guns. 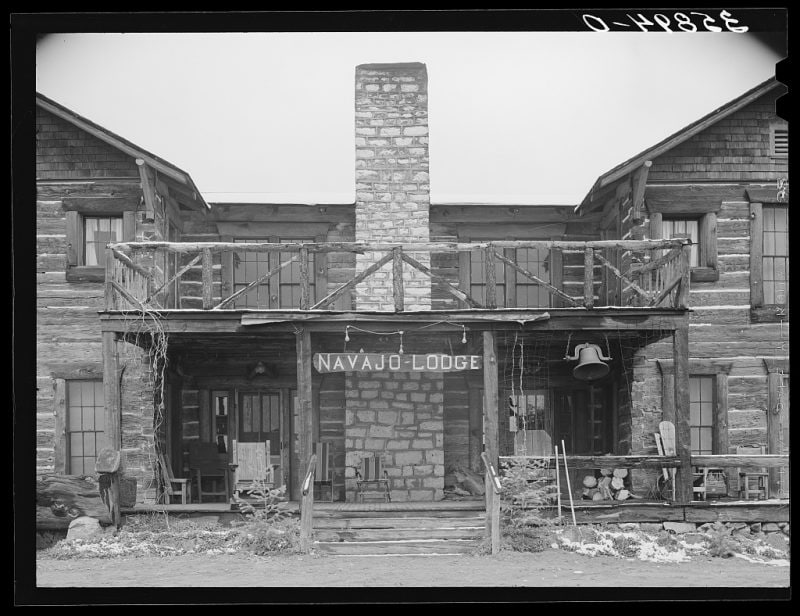 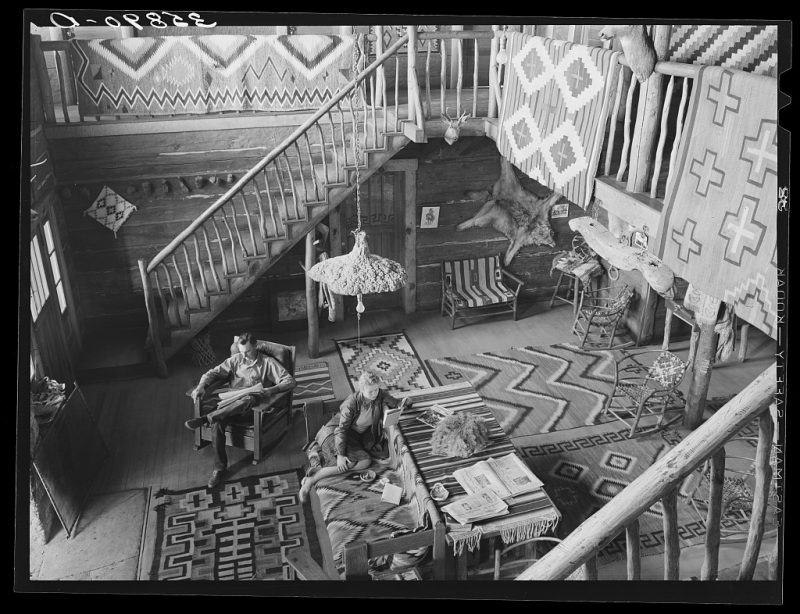 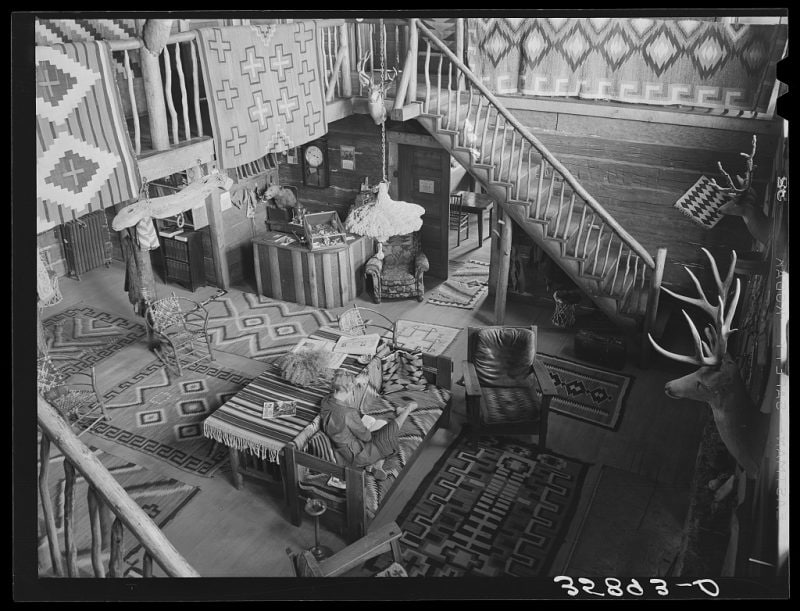 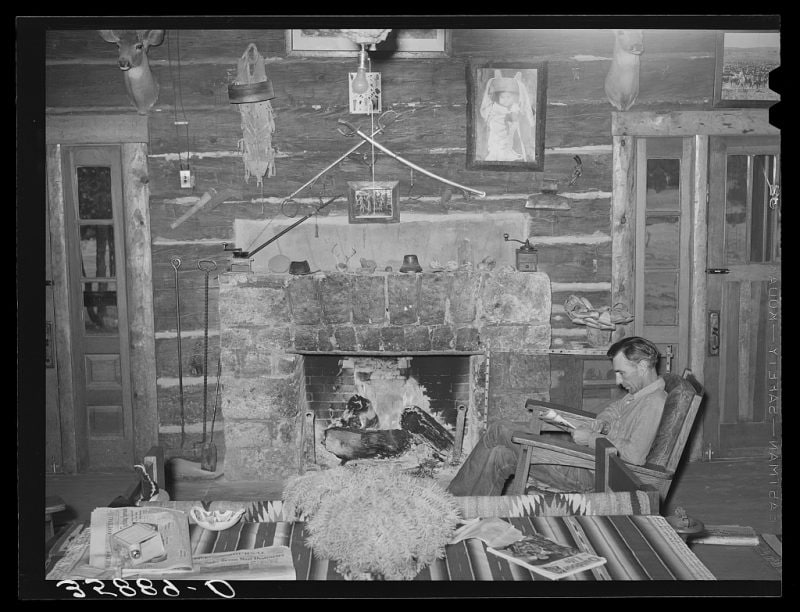 “Proprietor of the Navajo Lodge before the fireplace. Datil, New Mexico.” Note the crossed cavalry sabers on the wall and what looks like an S&W Lemon Squeezer top-break revolver.

A photo of the living room shows cougar and wolf pelts on the wall as well as antlers on a stool and numerous cowboy images. 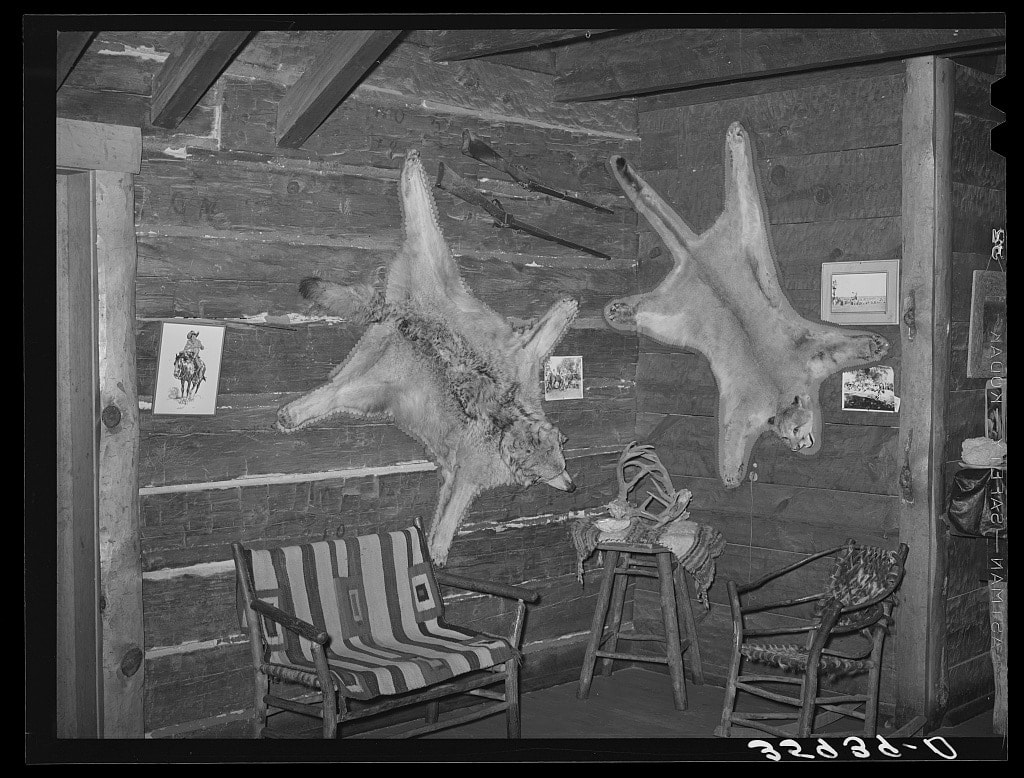 The story of the mountain lion pelt was even recorded in lore of the area, with a National Park Service history recalling that Ray Morley, proprietor of the Navajo Lodge, who reportedly “gained wide fame for the tall tales that he told the travelers,” said he harvested the big cat in a chance encounter when it “jumped on the running board of my car, and I killed it by sticking it in the eye with a hat pin.”

If you are curious about the guns by the pelts, closer inspection shows what looks to be a Sharps falling-block style rifle hanging upsidedown under another long gun that seems to be a Springfield rifle, possibly a Trapdoor breechloader conversion. 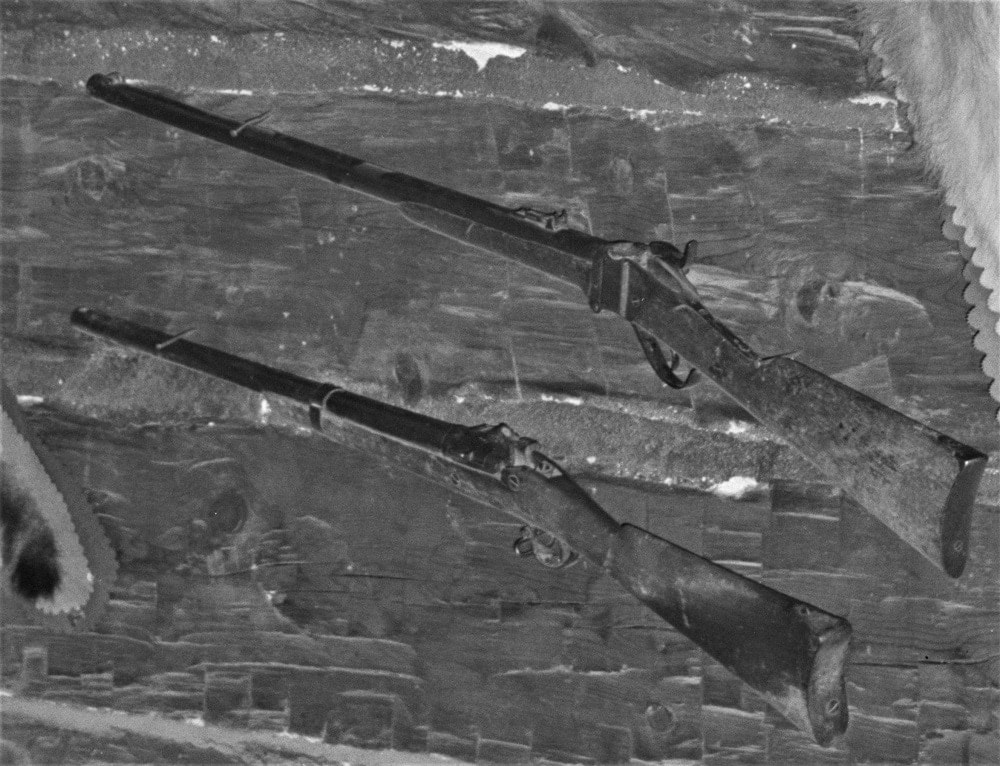 It should be noted that 19th-century cartridge rifles such as these were sold in the 1940s as obsolete surplus with a common price of about $10-$15. Good enough for a wall hangar at the time, if nothing else.

Then comes the manager’s desk. 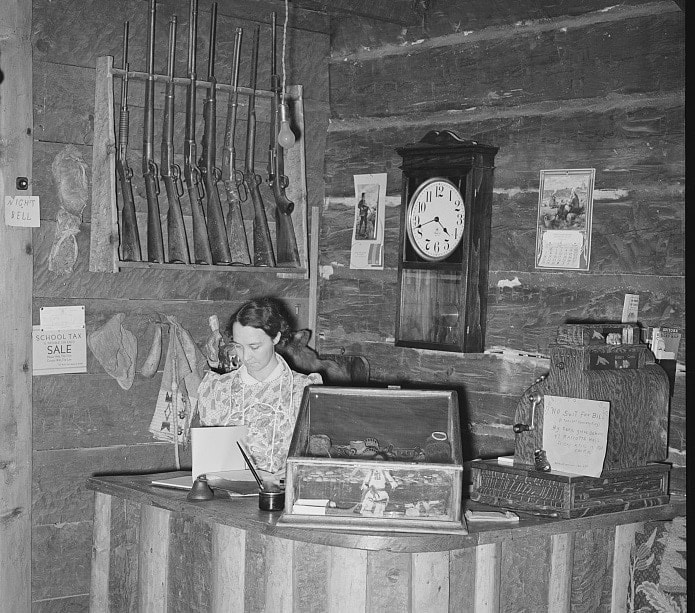 “Manageress of Navajo Lodge at the desk. Datil, New Mexico.”

Note that beautiful gun rack on the wall. Lee apparently was interested enough in the rack to get at least two other pictures of it, showing much better detail. 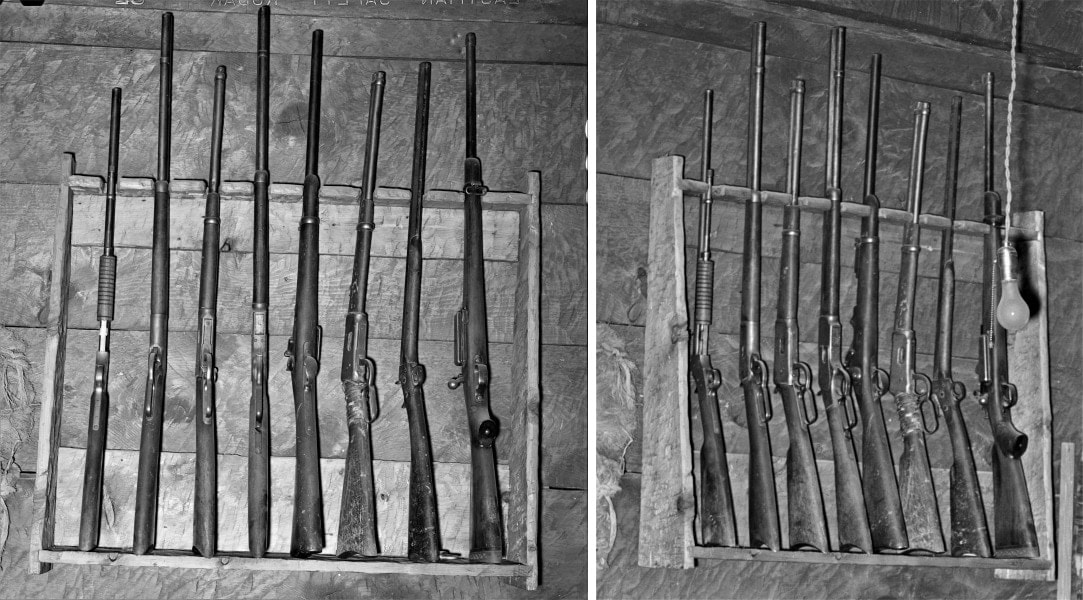 Now that is nice

From left to right seems to be a pump-action rimfire rifle with a tubular magazine, perhaps a Winchester M1890 or M1906 by the look of the 12-groove slide grip– but on closer inspection is a Stevens Model 70.

Next are a trio of what seems to be lever-action Winchester rifles including an M1894 rifle, M1892 carbine, and “The Gun That Won the West,” an iconic Model 1873 rifle with an octagon barrel.

Then comes a Springfield trapdoor carbine, likely in .45-70 Government, complete with a saddle ring bar on the left side of the stock.

Next is what looks like another 1892 cowboy gun that has a stock repair and sports very well-used furniture. A gun with lots of stories.

Then there is a Remington Rolling Block rifle with an octagon barrel.

Finally, at the far right end of the rack, is a military surplus Krag-Jorgensen .30-40 U.S. Army rifle that has been sporterized with a rubber butt pad and chopped-down Monte Carlo-style stock. The proverbial $99 SKS of its day, we found ads for these guns for $11.50 in the 1930s, shipped right to your door.

Of course, fast forward eight decades and all of the above are incredibly collectible and highly sought after these days.

As for Datil, the town is listed with a current population of 54 and we can’t tell if the old Navajo Lodge is still around, although U.S. Route 60 still intersects it. For Lee, the photographer who captured the images, he died in 1986 and is seen today as a pioneer in terms of the modern photo essay, and more than 23,000 of his images are in the Library of Congress.

While we can’t take you back literally in time to browse the gun rack at the Navajo Lodge, you can always take a look at the interesting pieces we have curated in the Guns.com Collector’s Corner, where history is just one click away.