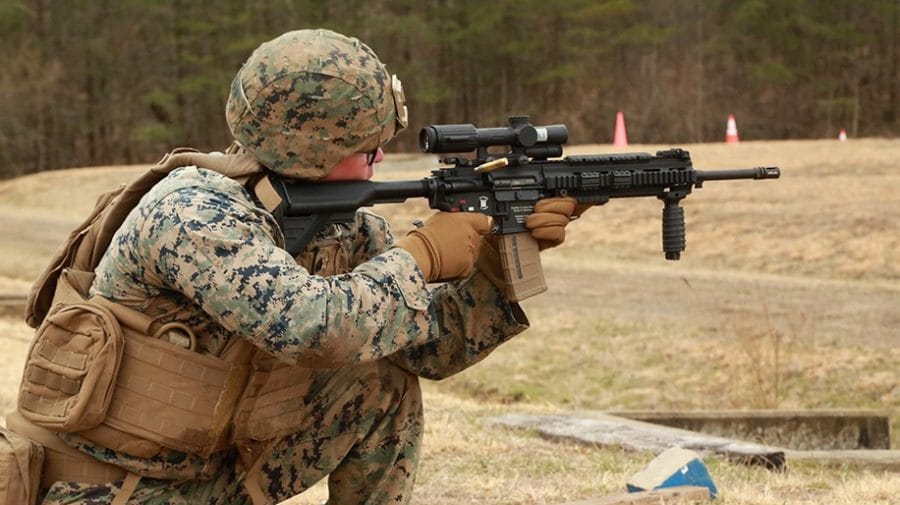 The Marines describe the SCO as a “magnified day optic that improves target acquisition and probability-of-hit with infantry assault rifles.” Using a variable power non-caliber-specific reticle with an illuminated or nonilluminated aim-point, users can identify their targets from farther distances than the current RCO standard– the Trijicon ACOG 4×32.

“The SCO supplements the attrition and replacement of the RCO Family of Optics and the Squad Day Optic for the M27, M4 and M4A1 weapon platforms for close-combat Marines,” said Tom Dever, interim team lead for Combat Optics at Marine Corps Systems Command.

The glass selected for the SCO program is Trijicon’s VCOG 1-8×28. The waterproof (to 66 feet) optic has a 7075-T6 aluminum housing and a first focal plane reticle that allows subtensions and drops to remain true at any magnification.

Further, an integrated mounting adapter eliminates the need for conventional ring mounts, which the company says allows users to quickly and easily mount the VCOG to any rail system.

“We introduced VCOG 1-8×28 to the commercial market in early 2019, but its design was inspired by requests from our warfighters,” said Chuck Wahr, Trijicon’s Global Vice-President of Sales & Marketing in a statement from the company. “During design, development, and testing, we constantly challenged ourselves to produce a scope that would deliver the performance necessary in the most punishing of conditions.”

Trijicon is slated to produce approximately 19,000 VCOGs for the Marines, with the first units expected to reach the fleet in 2021. MCSC notes the purchase includes spare parts, training, nonfunctional units, interim contractor logistics support and refurbishment of test articles.