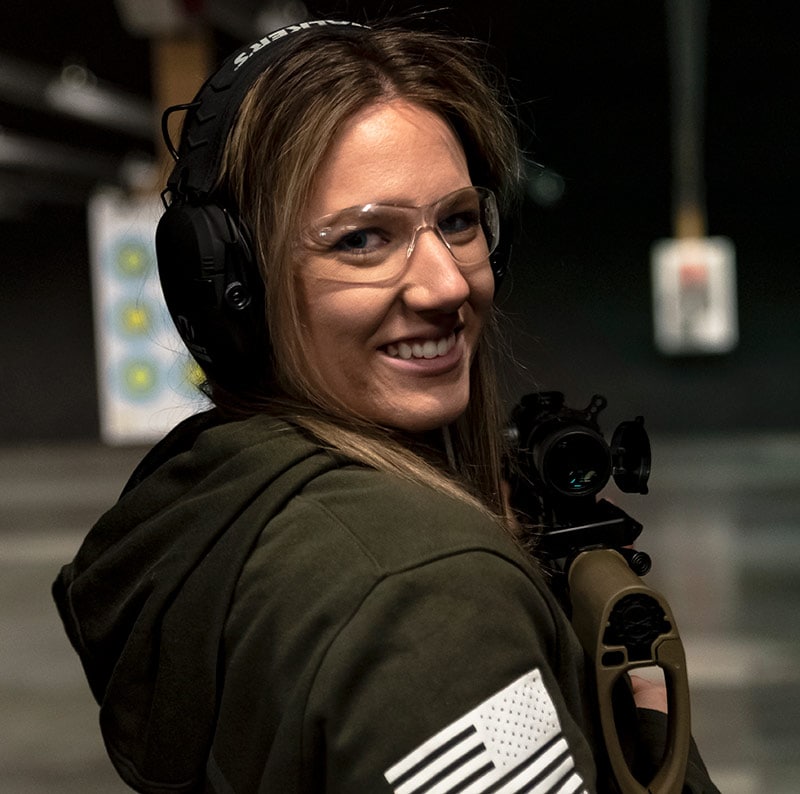 In my final edition of this series, I hung out with Ecommerce Photographer April Robinson. Robinson, a recent hire to Guns.com, captures the beautiful images found in our Certified Used Guns section in addition to providing product imagery for content and social media. We nerded out over photography and talked about her experience as an MA in the U.S. Navy Reserves.

Guns.com: So let me kick this off by asking how long you have been a member of the Guns.com team and how’d you end up here?

Robinson: I was hired on in October but I couldn’t start until November because I am a military policeman in the United States Navy. I was activated in October to go over and assist Romania’s new base.

I’ve always had a soft spot for the Second Amendment — Freedom is cool — and I saw the job posting and thought it was a joke. I was like, Guns.com is not hiring in Minnesota. That’s not a real thing but I really wanted it to be true. Lo and Behold, it was! I applied, Melissa Kropelnicki called me in for an interview the next day and it’s been a smooth relationship ever since.

Guns.com: So kind of take me through an average day. What does that look like for you? I realize that, if it’s like mine, it probably shifts based on the needs of the site; but give me a bird’s eye view.

Robinson: The meat and potatoes of my position is essentially going through our inventory, our Certified Used Guns, cleaning them and then taking pictures of them for our site. I try to show customers why they should buy that gun. If it’s in great condition, I’m going to make it look as sexy as I can. If it’s been loved, I’m going to show why it’s priced that way.

Obviously, I get to do crazy photoshoots with like Sweet Tart hearts and the most random objects. Those photo shoots make my day! I love it. They are so fun! I’m a creative weirdo at heart so I need to have those fun photoshoots. 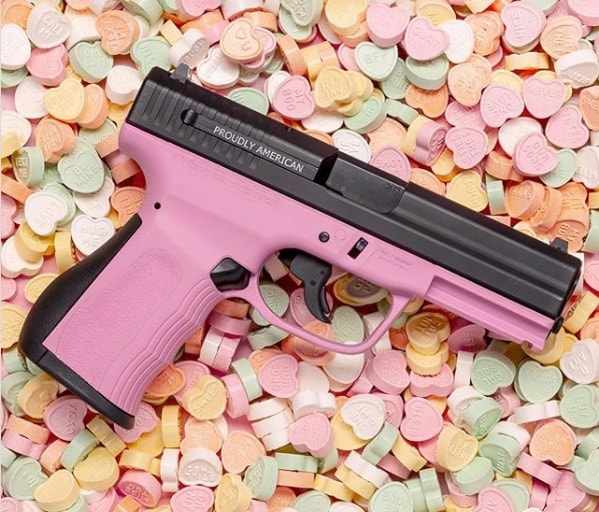 Guns.com: I feel you. I’m a creative weirdo too! On that creative note, I find that there’s a common misconception that photographers just raise a camera, point-and-shoot; but there’s a ton more that goes into getting a good shot, right? So what are some challenges of photography that people who don’t do it for a living might be surprised to learn?

Robinson: Oh my God, so many! Not every firearm is created equally. I’m not going to utilize the same (photography) techniques on a Baby Browning as I am a Remington 700. They’re different sizes, different finishes…they’re just different. I bring different lighting techniques to balance the shine and accent the features. With the nice lights we have, we can do a super low ISO, a nice shutter speed and get those crispy images which I really appreciate.

Another thing is you need to have a good eye for editing because not every silver finish looks silver.

Guns.com: Agreed. Finishes can often turn interesting shades. There’s a lot that goes into the post-processing of images to color correct and ensure whatever you’re capturing looks the same in the picture as it did when you took the photo.

Robinson: Yeah, if a listing says a gun is silver but the images look gold, that’s not cool. We don’t want you to buy something that’s not true. A lot of our inventory is used so I want the customer to see what they’re getting.

Guns.com: Let’s nerd out for a second. What’s your camera setup?

Robinson: My cameras are different depending on if I’m shooting products or lifestyles. For products, I use the camera we have here which is a Canon 6D. For lifestyles, I rock a Nikon D810 with a beautiful Tamron lens on it.

Guns.com: Where did your interest in photography start?

Robinson: Pretty young, I would say. This is a cheesy answer, but my dad took me hunting. I was too young to do the classes and hunt so he gave me a camera. We would walk the fields and I’d shoot with the camera. I haven’t been able to set it down since. This is just in my DNA. I have to be creative. 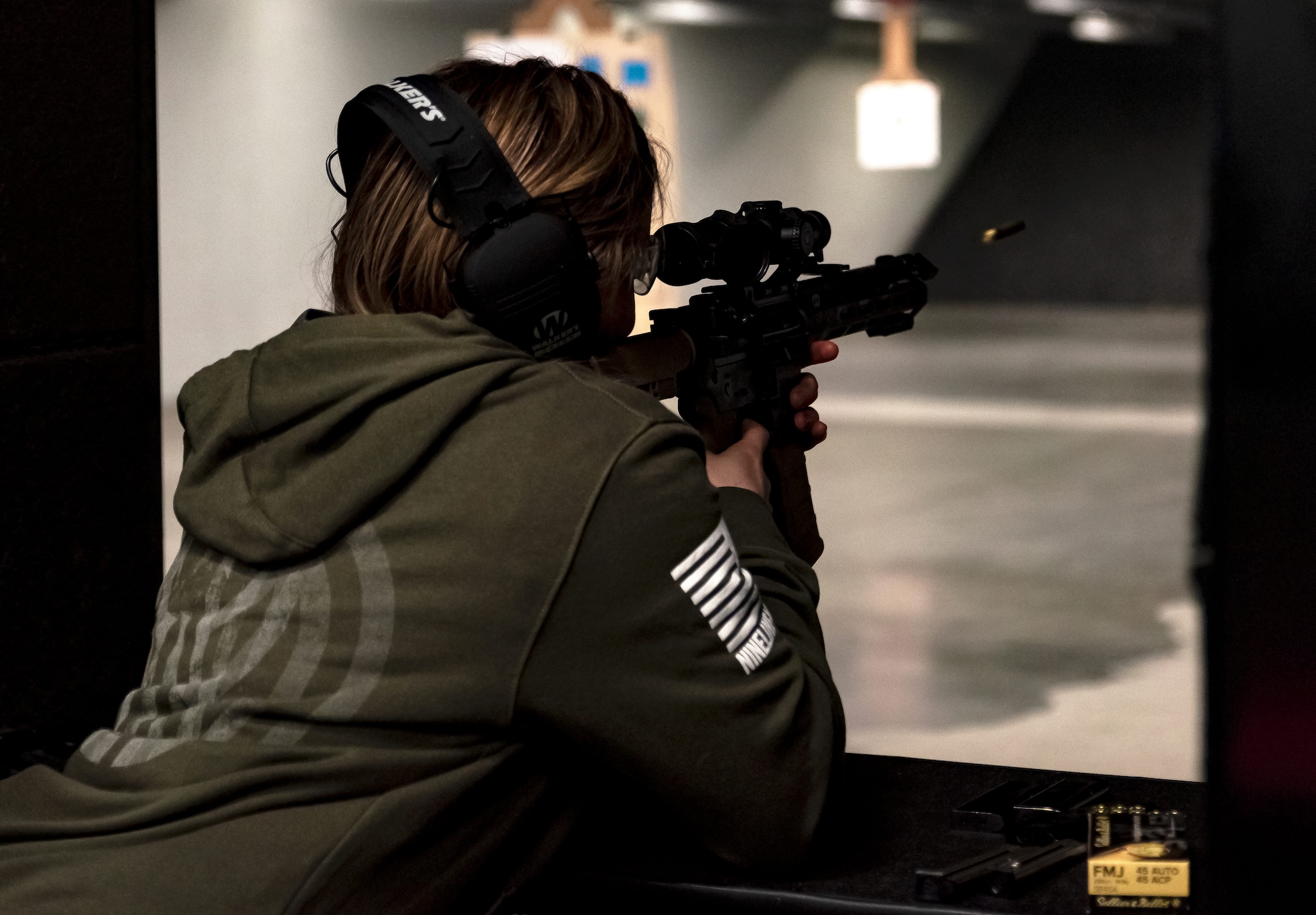 Robinson’s military background has made being a firearms photographer a little easier. (Photo: April Robinson/Guns.com)

Guns.com: So you mentioned the Navy and I understand you’re in the Reserves. Does your military life ever cross into your photography world?

Robinson: When I was deployed, I was my unit’s photographer and I acted as the public affairs officer; but I am a military policeman and I don’t do photography with that. I’m okay with that. I get to pick and choose my adventures, you could say, and sometimes it’s good to take a break and do different stuff.

Guns.com: For sure. Is it helpful coming from that military background? I mean does it make it easier to step into the Guns.com Vault and know what to grab, what to photograph because you have a history with firearms?

Robinson: Yeah. I don’t know everything but it’s rare for someone to have to par it down for me. The environment here is if you don’t know something they are happy to teach you. There’s so much teamwork.

Guns.com: Finally, have there been any guns in the Vault that you have just drooled over?

Robinson: Yeah, there was a Ruger LC9 we gave away for a holiday party that was a raspberry color. I actually bought it off someone. It’s not too girly but it’s perfectly shaped for my hand. It’s fun to shoot.

I feel like almost any competitive handgun, the body style on them is so neat and cool in a way. I would never own one because I don’t competitively shoot but I appreciate the aesthetics and the unique look.