A Tale of Chuckin’: Why You Should Try This Spring Hunt 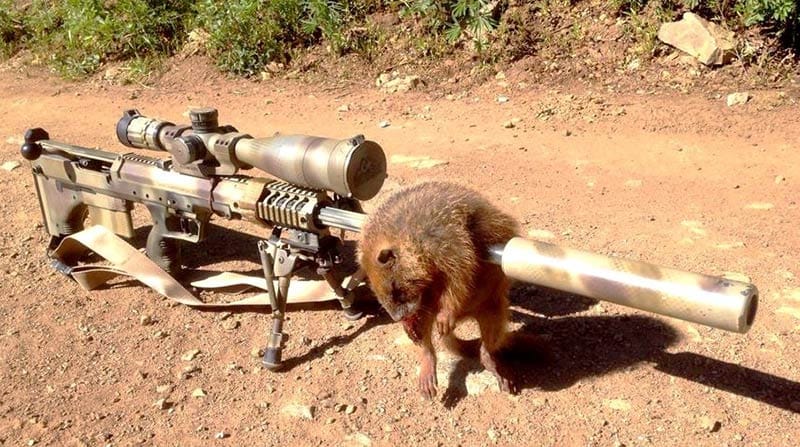 Chuckin’ is a must-try for varmint enthusiasts. (Photo: Jeff Wood/Guns.com)

The change of seasons is in the air again, the cold of winter slowly yields its grasp on the mountains and valleys giving way to spring. Many people pass by this season completely unaware of the fun and challenging hunting opportunities that lie within.

Many years ago, during a hike through the high Rockies, I caught a glimpse of an animal unfamiliar to me. The Yellow-Bellied Marmot, also known as a woodchuck, rockchuck, groundhog or whistle pig — basically, a giant squirrel.

You might say I’m a bit of a varmint enthusiast and I’ve hunted them in almost every conceivable way. Some time would pass before I became more familiar with these particularly handsome and playful little rodents. I came to know their habitat and where to look for them. As fast as you can whistle, I was hooked on what has lovingly come to be known as Chuckin’. 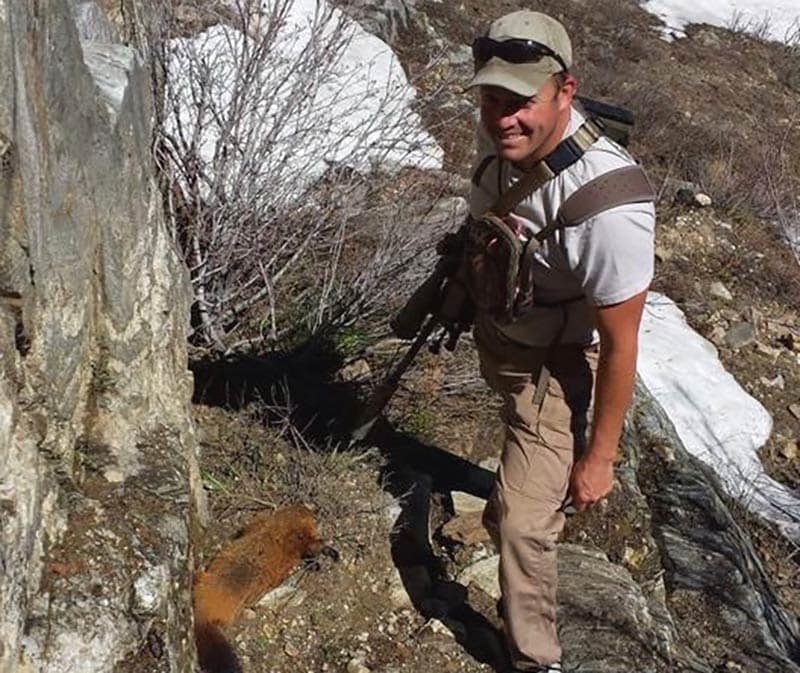 The author with a woodchuck. (Photo: Jeff Wood/Guns.com)

Every spring since that first chuck took a dirt nap in the cool shade at 9,000 feet, we go into the high country looking for beautiful brown pelts. The Marmot is a keen-eyed, wary little animal. They are so easily hidden in the landscape where they live and are also quick to hide. That’s why it took me so long to see one in the wild.

One of my favorite reasons to hunt these cunning little creatures is because they are the ideal practice for big game hunting. They live in the same canyons and hills where we hunt deer and elk. They are just as hard to sneak up on and a good-sized Marmot is about the same size as a deer’s vital zone. 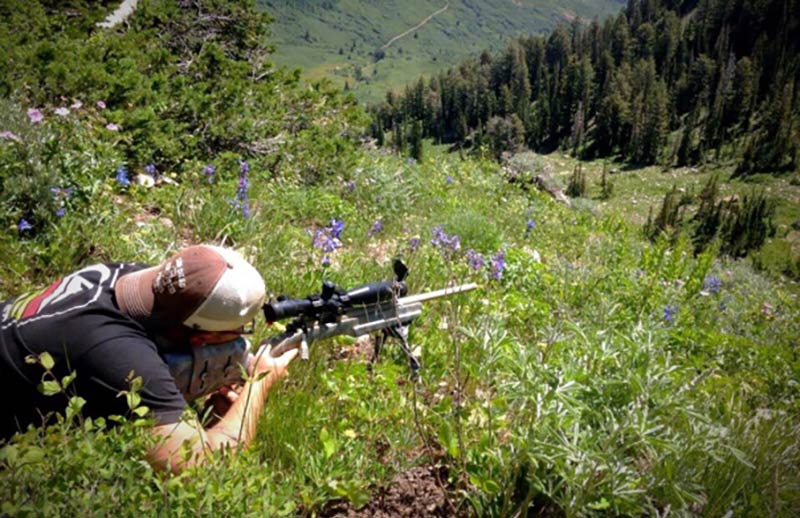 The Yellow-Bellied Marmot is as tough as the country they live in. Even though they usually weigh in at under 10-pounds, a poor shot from a deer-sized cartridge might not shut Chucks down. I have seen an impressive impact from something like a .308 Win fail to stop a Chuck from getting back to his burrow. That’s not to say you need anything extreme to hunt them, I do most of my Chuckin’ with a .223 Rem. Any good varmint rifle would do just fine, so long as the shot placement is right.

Other equipment you might need is decent glass, binos and perhaps a good spotting scope. Picking these animals out from the rocks can be very deceiving. You’ll also want some good boots, the places you’ll go to find them can be in some tough country. Lastly, I always bring a good pack. Water and snacks are a must to tote along as well as ammo, tripods, and other gear.

With small family groups of Chucks scattered across the peaks of our mountains, it wouldn’t be hard to exterminate the little guys. For this reason, we try not to wear out any particular place taking never more than one per den. Not only does this keep the clans going, but it also gives us more country to hunt and survey. 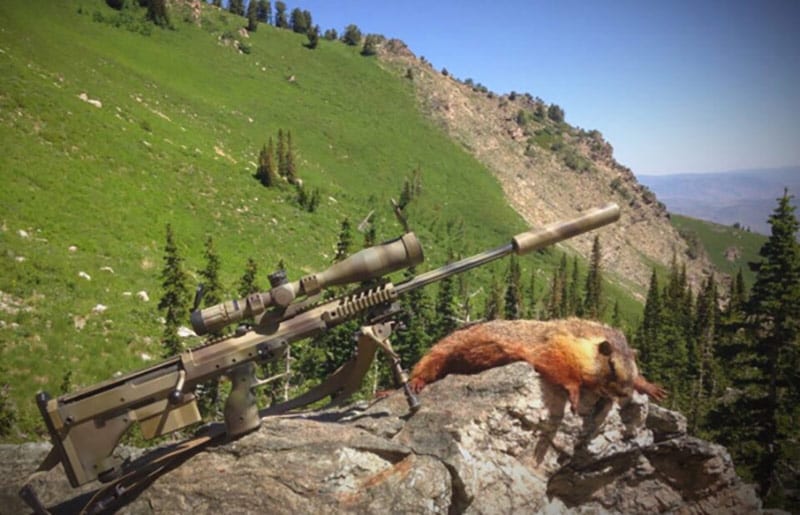 The rugged and towering Rocky Mountains, where these critters live, offer some beautiful vistas. Some of my best stalks have been on Marmots. I have crawled through waist-deep grass and hidden behind rocks and trees, waiting for the perfect moment. You might find yourself leaning precariously from a cliff or hanging off the edge of a steep snow cornice to get the best shots.

Chuckin’ isn’t just a solo venture for me, as my son also participates in the spring tradition. The day my son shot his very first Chuck, we had sneaked into a high alpine bowl with a glacial pond in the middle. There we positioned ourselves on a high point with a perfect view of the many rock formations situated around us. Junior had just set up his little Keystone Arms EX17HMR rifle and as we waited for one to appear, we heard a noise from just a few yards in front of us. As luck would have it, two young Marmots popped up on a rock barely 15 feet away from us. Whispering under our breath, Junior slowly brought his rifle onto the target and thumped one of the two. 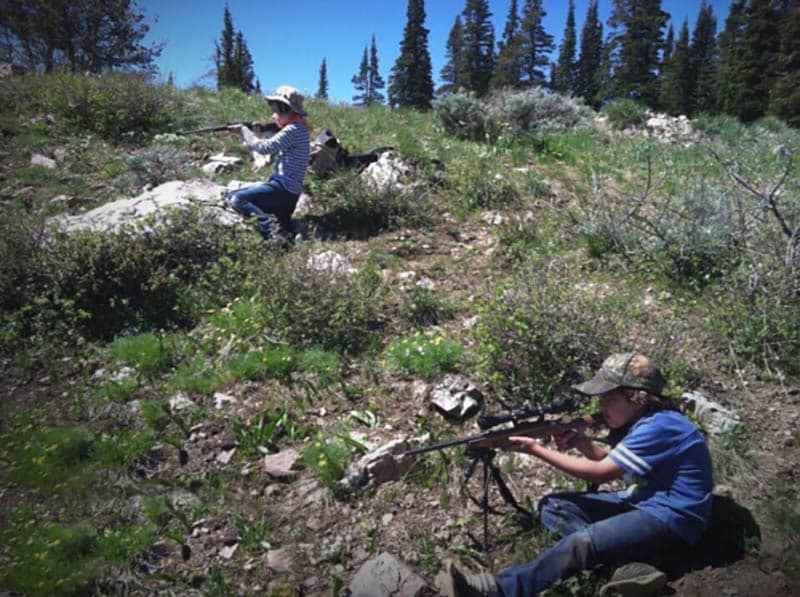 Whether it is trying to silently stalk through thorny shrubs or struggling through waist-deep snow, there is always a great spring hunting challenge and fun to be had in the pursuit of these cunning animals. Sharpening your stalking and shooting skills and enjoying the beauty of alpine forests will make Chuckin’ another hunting delight to add to your spring calendar.