Getting Up Close with some Rarely Seen Military M1911s 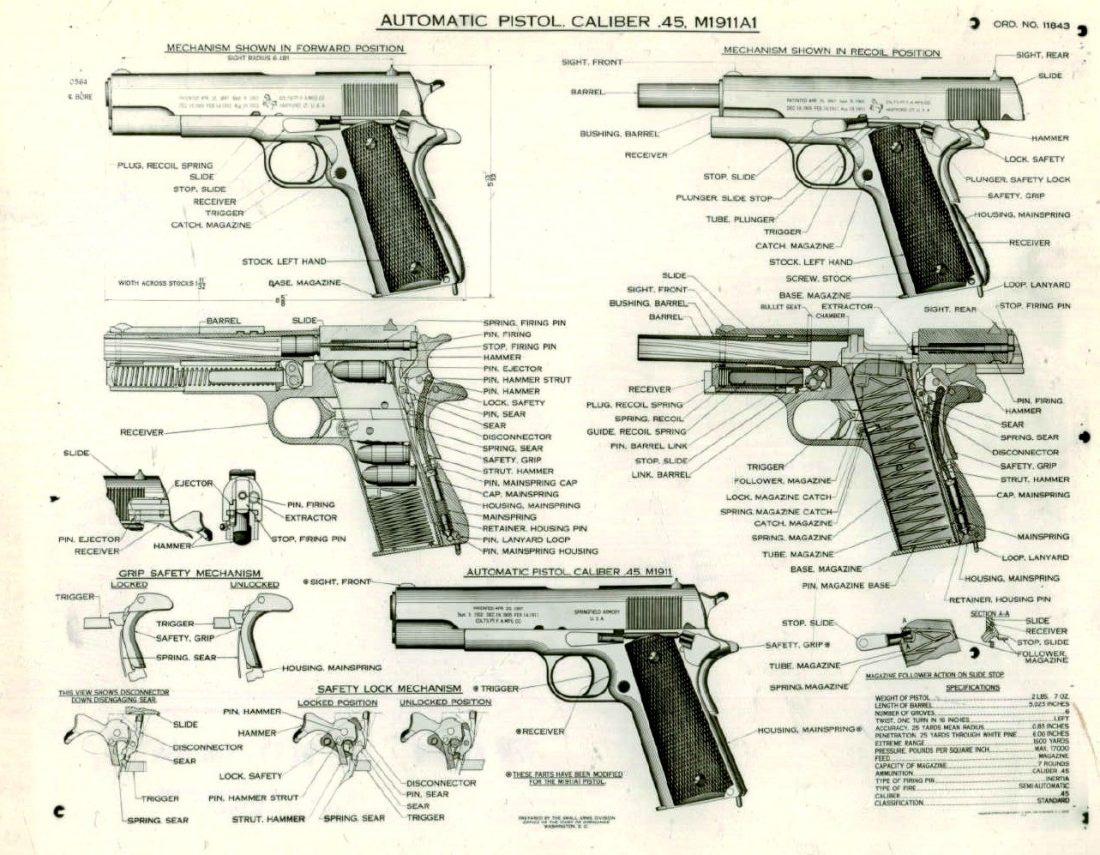 The U.S. Army first adopted what is typically described as the Government Issue .45 in the year 1911 and it remained standard through 1986, although for many it will never be replaced. (Photo: Springfield Armory National Historic Site)

While John Browning’s venerable M1911 .45ACP design has shown it has the strength to endure, there are some of these guns that are much rarer than others.

Besides commercial production which had gone on at a steady pace for over a century, the U.S. Government ordered over 2.5 million M1911/M1911A1 pistols between 1912 and 1945, with wartime production in the Great War and World War II accounting for most of those contracts.

While there are lots of Colt-produced military M1911s floating around… 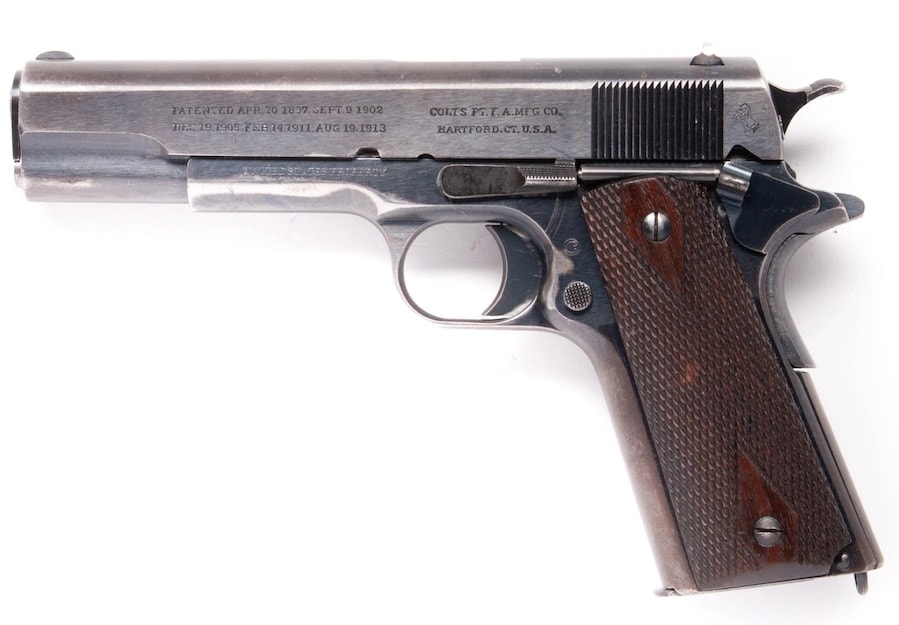 This U.S. Property-marked Colt military M1911’s serial number is 15639, dating it to 1912, the introductory year for the model, and it is unconverted to the later A1 standard. This old veteran is looking for a good home.

There were also M1911s produced by a host of other stateside manufacturers. In the Great War, this included the U.S. arsenal at  Springfield Armory, ammo maker Remington-UMC, and slim few made by North American Arms of Quebec.

Fairly common World War II GI .45s include those made by Remington Rand. The company received drawings, gauges and tooling from the Army’s Springfield Armory, which had been previously used to manufacture M1911s and converted their “C” Division typewriter plant and warehouse in 1942 to war production. 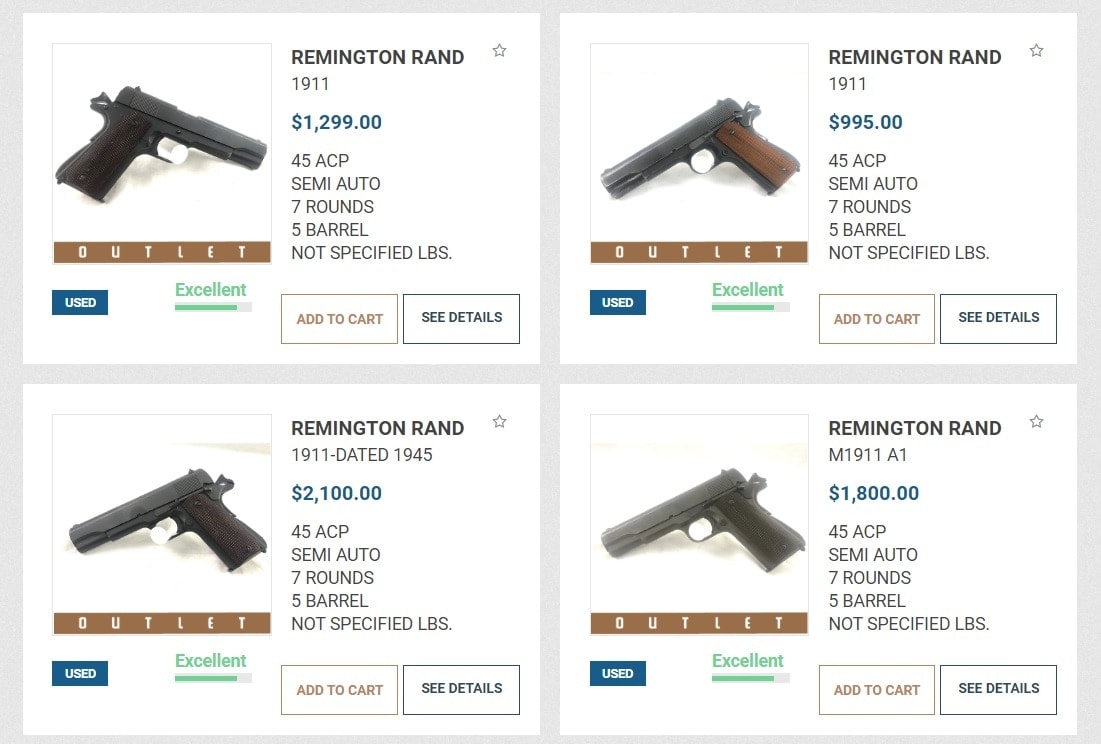 The typewriter company produced an estimated 900,000 M1911A1s during WWII and we usually have several available to choose from.

Then came guns made for the military by Ithaca. The firearms maker famed for their shotguns produced some 400,000 M1911A1s during the war. 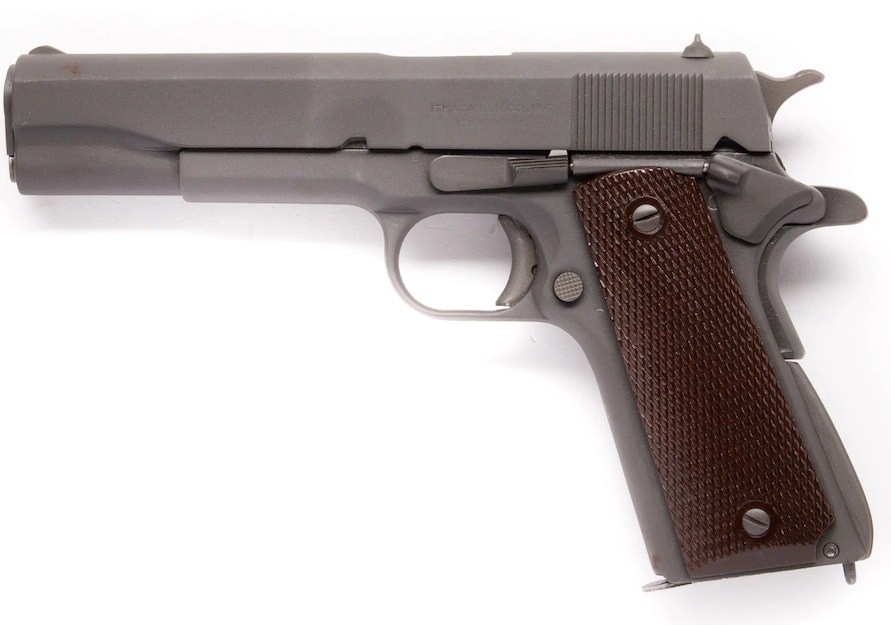 Like other “war baby” M1911A1s, some Ithacas filtered out to the civilian market after the war while others remained in service with the U.S. military and overseas allies well into the 1980s. This wanderer is seeking an eager collector

Tell me of Union Switch

Much less common WWII military contract M1911A1s were made by railway equipment maker Union Switch & Signal company of Swissvale, Pennsylvania. Of the 1,878,742 Government Issue .45s produced between December 1940 and September 1945, US&S accounted for just 50,000 guns making them one of the rarest and most sought-after variants. 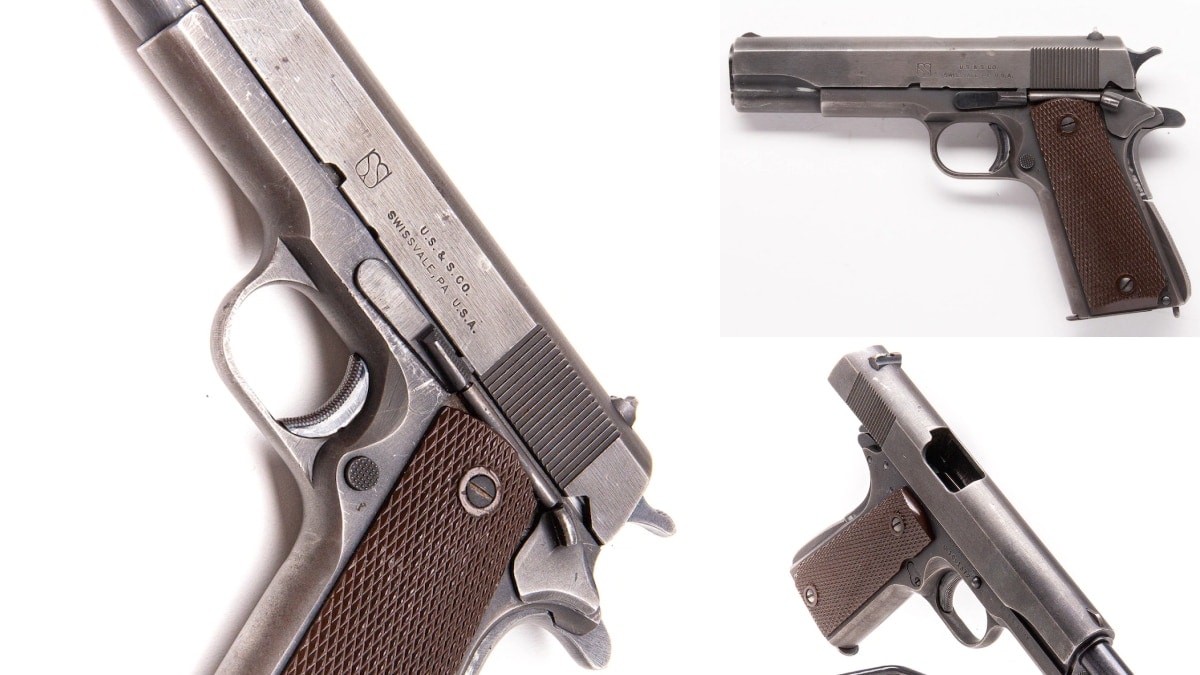 This excellent specimen in the Guns.com Vault was made during WWII by Union Switch & Signal and is incredibly collectible. Serial number: 1091372. Manufactured between 1942-43. The only U.S. 1940s era M1911 that is harder to find is from an experimental run of 500 guns made by the Singer sewing machine factory under an “Education Order.”

Union Switch started production in late 1942 and by January 1943 the first guns of a planned 200,000-unit contract were being accepted by government inspectors. However, the company’s order was trimmed significantly due to the needs of the services, and, as they switched to production of M1 Carbine parts, US&S halted pistol production by November 1943. Noted for their exceptional quality control, more than 600 machine actions were needed to produce a single pistol and reportedly not a single US&S M1911A1 was rejected by government inspectors. 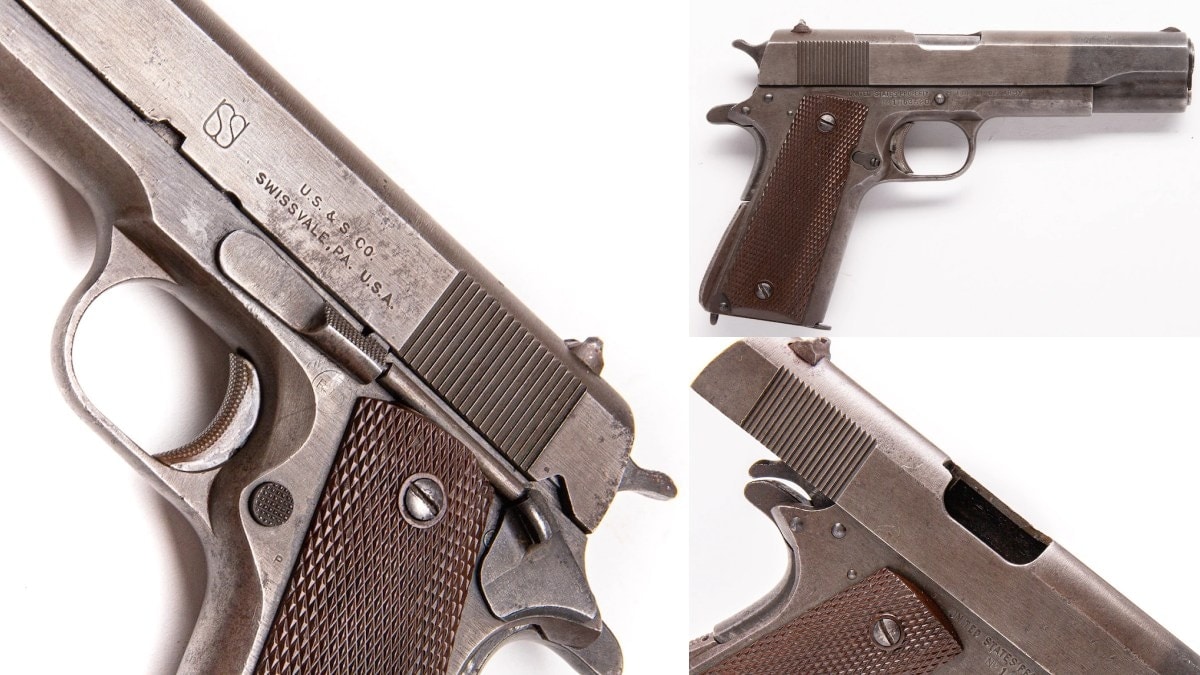 This US&S sidearm up for grabs in the Guns.com Vault truly is a piece of history. Manufactured between 1942-43 its serial number is 1063520.

Besides U.S. military M1911s, there is also, of course, a cornucopia of guns made either overseas under license or produced here in the States for foreign contracts. Before the U.S. entered the Great War, M1911s went “Over There” in the holsters of Canadian troops while the British military placed a large order for guns chambered in .45. 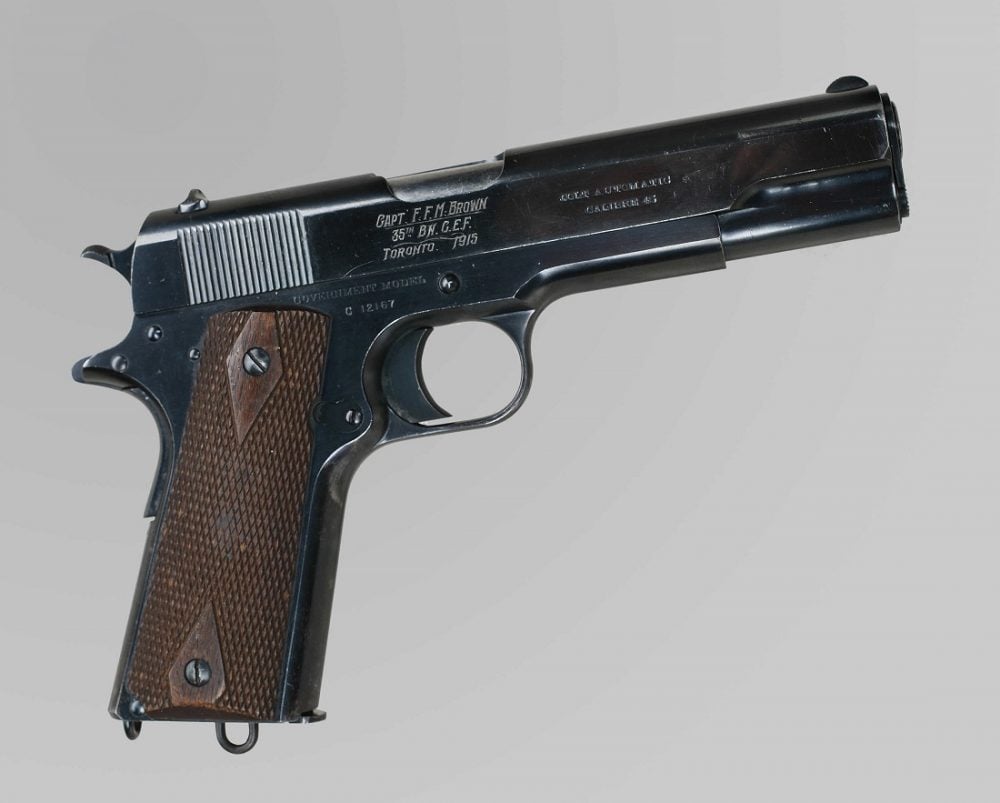 “Colt .45 Calibre Automatic Pistol” owned and carried by Canadian Capt FFM Brown of the 35th Battalion, CEF, a unit of replacements which was mustered in Toronto in 1915 for service overseas in France. (Photo: Canadian War Museum)

The Tsar of Imperial Russia placed a huge contract to help equip his 14 million-man army and about 51,000 were made before the country went Red. In a twist of fate, at least one was present at the execution of the Tsar’s family in 1918. Argentina ordered 1,000 “Model 1916” pistols that proved popular enough for them to pursue making some 88,000 licensed “Sistema Colts” of their own starting in 1927.

Speaking of rolling their own, the Scandinavian country of Norway in 1914 started production of a Colt-endorsed M1911 clone with a few minor changes– such as a distinctive extended slide release. Manufactured by the Kongsberg Våpenfabrikk defense concern, the “11,25 mm Colt automatisk pistol M/1914” was a distinct model that remained in low-rate production through 1947 for both the domestic military and consumer market. 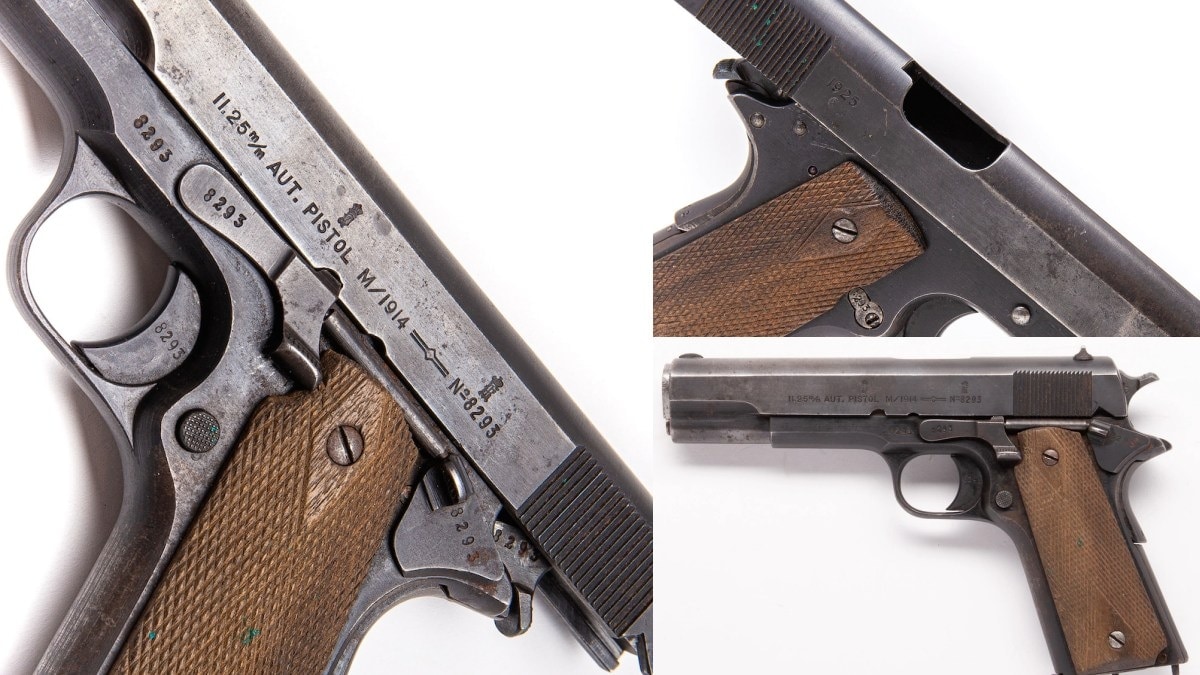 This Kongsberg Colt in the Guns.com Vault, like the rest of their kind, is marked 11.25 m/m AUT. PISTOL M/1914 on the slide. Its low serial number– 8293– points to a production date of about 1925 during Norway’s idyllic peace between the wars.

When the Germans occupied the country in 1940 during WWII, they kept the line moving to crank out pistols for their use, often complete with dirty bird acceptance stamps– proving that the M1911 pattern handgun saw service on both sides in the conflict. Others, deemed “Matpakke-Colts” or “lunchbox Colts” were smuggled out of the factory for use by Resistance groups. Still, fewer than 33,000 M/1914s were produced. 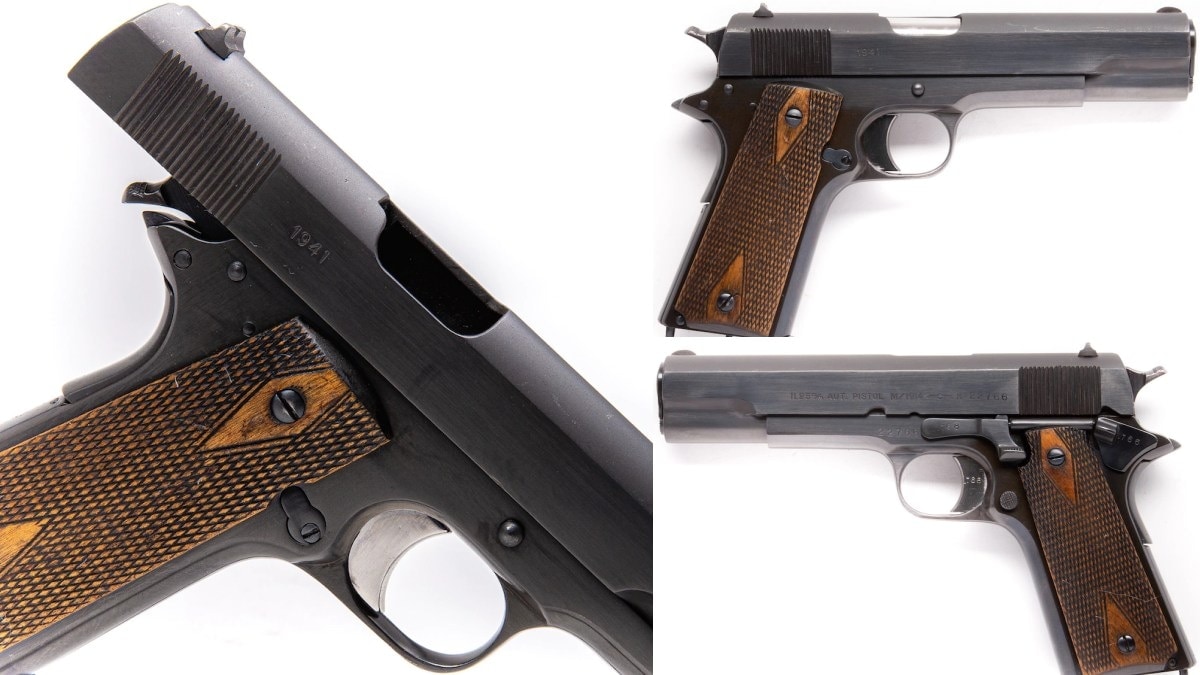 This beautiful Kongsberg Colt looking for a new home has a later serial number, 22766, which is correct for a 1941 production date– the very year the Germans invaded Norway in what they termed Operation Weserübung. If only this gun could talk.

There just seems to be something about an old military M1911. They just don’t make ’em like that anymore.

Interested in rare and interesting guns like these? Check out our Collector’s Corner for a carefully cultivated selection that is often steeped in history.