Q&A with Dave Hartman, Director of Training for Gunsite Academy 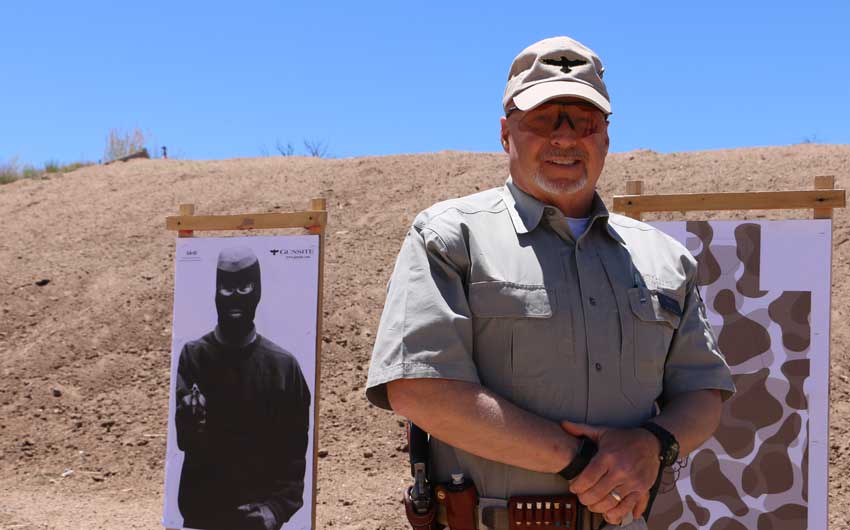 Dave Hartman has over 30 years of dedicated service to this country through the Marine Corps and the Orange County Sheriff’s office. It was a natural fit to move from training police officers to training a wide mixture of people at Gunsite Academy in Paulden, AZ. For the past 10 years, he has worked as the Director of Training for the famed firearms training institute. We caught up with Hartman to talk about Lt. Col. Cooper, gun training during a pandemic, and Gunsite Academy.

Guns.com: The first question is about the thing everyone is seeing in the news right now, how COVID is affecting things? How have you guys changed your classes? Have you seen a need to change your classes? Kind of walk me through that a little bit if you will.

Hartman: We’ve dropped about 100 students. Now, that was due to them sequestered, quarantine, the uncertainty of it. What we did was we actually canceled a bunch of our classes along the lines of classes that required close proximity, hands-on, i.e. would be our defensive tactics classes, our close-quarters pistol classes, our edge weapon classes. The classes that combined actual physical hands-on amongst the students and instructors that are going to be in close proximity doing those defensive tactics. So, we took the preemptive strike on canceling those.

Then our regular classes, since the classes were getting kind of small, we had room to space people out in the classroom so we were able to maintain that six-foot distance, spending minimal time in the classrooms. Everybody’s getting their temperature taken, staff and students, every morning. Then on the range, we’re mostly outside so we’re able to spread out a little bit.

Another place where we’re preemptive was in our shoot houses. Normally on the line, our student to instructor ratios is one to four, where I have 12 students on the line, we’ll have three instructors. In the shoot houses, that is one-on-one, so to maintain the distance, what we did, instead of doing live fire, because as an instructor going through a live-fire shoot house, you want to be within touching distance of that student so you can control them in case something goes wrong. So, what we did was, instead of using live ammunition, we went to Simunitions’ marking cartridge, give the students a modified gun and we’re able to maintain that distance in our shoot houses. Once all this is all said and done, then we’ll go back to the live-fire, but that’s the preemptive strikes we’re taking. 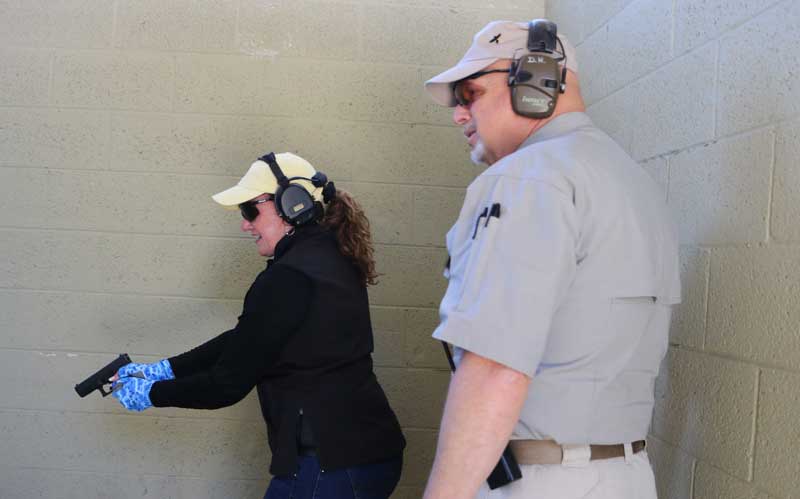 Live fire shoot houses, such as this one, won’t be part of Gunsite curriculum until COVID-19 passes. (Photo: Gunsite)

Guns.com: Sounds great. We’re writing an article on good qualities of defensive firearms instructors. As one of the nation’s premier training facilities what are the qualities that you’re trying to build into your instructors?

Hartman: Let me just back up a little bit on how we hire instructors. All right, so what we ask is credibility. We ask that folks are either retired military and law enforcement or a combination thereof or currently serving, folks that have actually carried guns for a living. It adds credibility to our program. Colonel Cooper, when he started this place, he wanted folks that have seen the elephant, so to speak in his words. So, what we’re looking for is credibility.

All of us instructors, no matter where we came from, if you go on to our instructors list and look at the bios, you’ll see that all these guys came from various military, law enforcement, government units, PHs, etc. All the experience, each and every one of them started at the very beginning, at the 250 defensive pistol, our bread and butter class. They have to take the 250 defensive pistol, 350 intermediate, 499 advanced, and a carbine shotgun class. In all these classes, which are graded have to be scored as a marksman one or above, marksman one or expert, you have to be recommended by one of your range masters to come on staff, saying, “Hey, this guy might have the talent.”

Now, once that’s said and done, you come back and go through, it’s referred to as a provost or an apprentice, and you have to come back and teach three times at your own expense where you’re evaluated by three different range masters. It can’t be the person who recommended you. It’s sort of like going to field training officer program all over again. You’re evaluated for a number of things, your ability to mingle with the students, being able to teach a certain subject on demand, your command presence, your range presence, your credibility, your ability to transfer knowledge, to get deep in the weeds, to explain things. At any given time, one of those three range masters can shake your hand and say, “Hey, thanks but no thanks. You’re not a good fit.”

Then once they get through the third range master, we bring them on as an apprentice instructor, but we’re looking for people who are credible. The integrity thing, you don’t bullshit a student, you don’t buffalo them, we call it MSU-ing, we don’t make shit up. If you don’t know the answer, you ask another instructor or you research it to give the student information.

Guns.com: How do you take the intimidation out of training with a firearm? I think a lot of new gun owners have a misconception that defensive pistol training is going to run like boot camp, how do you break down that barrier before they even get to the class and let them know that your training isn’t necessarily going to be like that?

Then when we’re in the classroom, we don’t go directly down range when they get here, especially the introduction classes, the 250 defensive pistol, we’re in there for about two hours with them going through PowerPoint presentation, safety presentation, introducing the instructors. So, during the breaks, these students and instructors have time to mingle and talk with each other. It puts a human touch to it. They meet their instructors before they even go down range. Instructors introduce themselves and give their bonafide, so to speak, introduction.

Then when we go down range, they’re only going to be down range for maybe an hour and a half before lunch. So, once again, the students get to interact with the instructors before we start firing. We’ll put the student on line, inspect their equipment, talk to them about their equipment, ask them how much experience they have, and put a personal touch on it, a personal face on it. Before lunch, they may only go through 20 rounds but we use that as a time for them to get to know us, us to get to know them, to get the nervousness out of the way doing basic drills like up, look, press.

Guns.com: Great. Here is your chance to plug Gunsite, why should a prospective student come and train with Gunsite Academy?

We’ve been in this longest war in U.S. history, there’s a lot of good instructors coming out of this conflict, but they’ve been there, done that. Can they instruct? Can they impart knowledge? That’s one of the biggest debates. I get guys calling all the time saying, “Hey, I’m with Tier One Unit-this, I want to come on as an instructor. I want to send you my resume.” The first thing I’ll say, “I appreciate it but how many times have you been here?” They say, “Well, none.” I say, “Well, you don’t know where to start, you need to start at the beginning with us. All those aforementioned classes that I talked about earlier, then we’ll talk.”

Putting the cart before the horse? Don’t have a gun yet? Looking to add to your collection? Check out the Guns.com Vault to see the wide selection of Certified Used Firearms we have available.