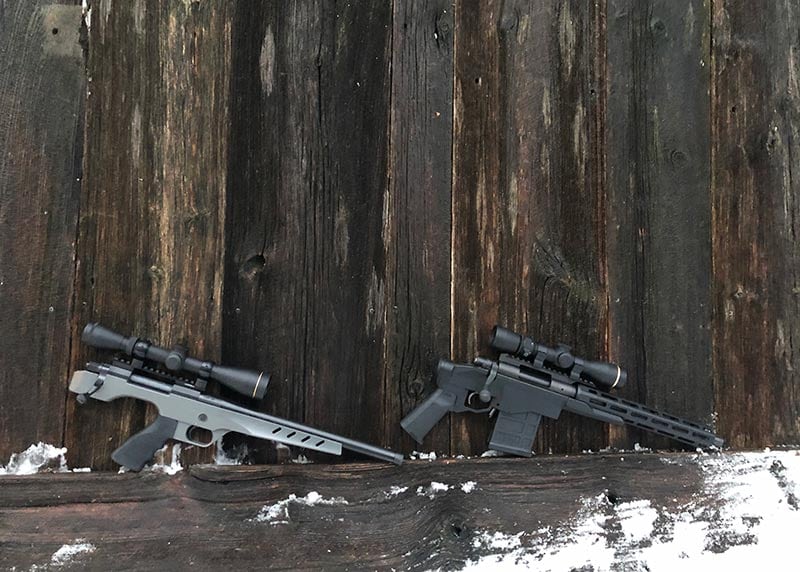 The frame of these two pistols is very different, with the Nosler using mid-grip design and the Remington a rear-grip. While the Nosler is a precision single shot, the Remington ships with a 10-round PMag. (Photo: Kristin Alberts/Guns.com)

In 2019, two manufacturers went head-to-head in the specialty bolt-action arena as Nosler introduced the single-shot M48 Independence, and Remington unveiled the magazine-fed CP. Which is the best and why? Guns.com breaks down these two specialty handguns to help you decide which is best suited for you.

Nosler wins this round on barrel length alone. With 15-inch barrels across the board — more suitable to traditional rifle calibers – Nosler’s barrels wring out the maximum potential, especially at longer ranges. While we’d like to see a quality muzzle brake in place, both are threaded for the shooter’s choice. 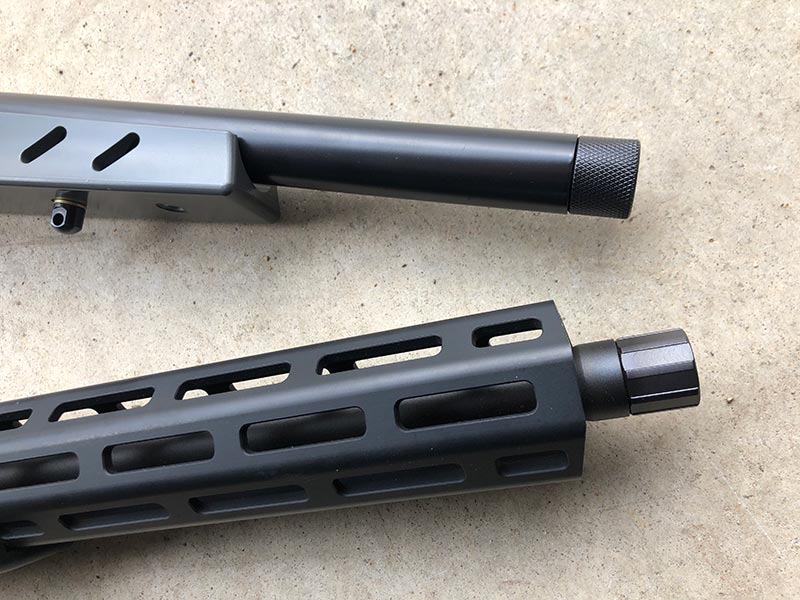 Both the Nosler and the Remington wear threaded barrels, though in this case, the 6mm Creedmoor Nosler has a 15″ barrel while the .308 Win 700 CP has a 12.5-inch tube. (Photo: Kristin Alberts/Guns.com)

Nosler, again, has the edge in chamberings, though Remington began closing the gap with the addition of the 6.5 Creedmoor. This will become largely a matter of personal preference, but for hunting, we like the Nosler lineup.

Nosler introduces a single-shot approach and Remington sticks with a magazine-fed design opting for a 10+1 Magpul magazine.

Remington takes the win here based on sheer volume with a 10-round magazine. This grants serious capacity to the beloved Model 700 action. Many serious handgunners, however, will argue for the strength of a solidly built single-shot.

The Nosler wins the build category as a true single shot with a center grip just below the action — meaning the gun balances surprisingly well, even given the longer barrel. Recoil is manageable on both, even without a brake in place. We found the center grip and ergonomic frame shape to make firing the Nosler more pleasurable from both the bench and sticks.

If you’re going for weight, Remington gets the nod, though this one is pretty much a wash with the guns weighing nearly the same empty. Load up that 10-round magazine on the Remington and the weight-winner shifts to Nosler, even when both are topped with an optic.

Weight negates recoil, but our center-grip 6mm Creedmoor Nosler was significantly more enjoyable to fire unsuppressed over the .308 Remington with its rear grip, though we’re well aware of the caliber differences. 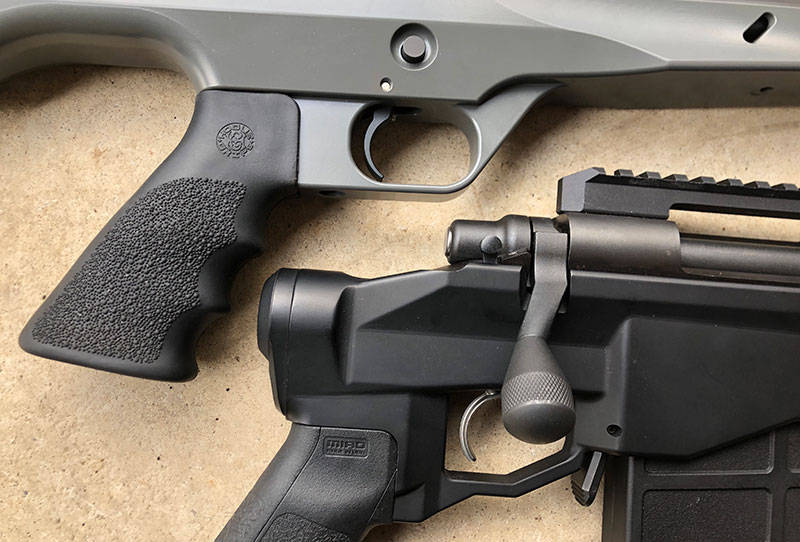 Nosler’s M48 Independence is drilled and tapped for a user scope base and we used a Leupold one-piece. Remington’s CP 700 includes an extended Picatinny rail.

Remington gets a clear nod in this department. The extended Picatinny rail allows ample room for either a long eye-relief pistol scope or more traditional rifle scope, and we opted for the latter. The Nosler, with its center-grip design, calls for a rifle scope as it’s difficult to get into a suitable shooting position when using a pistol scope. With the one-piece Leupold base we used on the Nosler, there was just not enough room and an extended option would have solved that.

While the M48 Independence has room for actions like mounting a bipod and swapping out the pistol grip, Remington’s CP has the edge on modularity. The M-LOK forend is loaded with attachment points, and similarly, the QD sling mount at the rear of the receiver can be replaced with a pistol brace.

The triggers on both are fully adjustable, so no changes needed there. Accessorizing is a matter of personal taste, so the jury remains out on this one, though there’s a clear edge for Remington among shooters desiring a more tactically-minded platform.

This one is not as clear as pure dollars, though the Remington certainly is considerably less expensive coming in at $1,085 versus Nosler’s MSRP of $2,495. Neither of these niche-market bolt action handguns can be had on the cheap, though their markets are not the cost-conscious; but rather, specialty longer-rangers, hunters, and modular shooters. 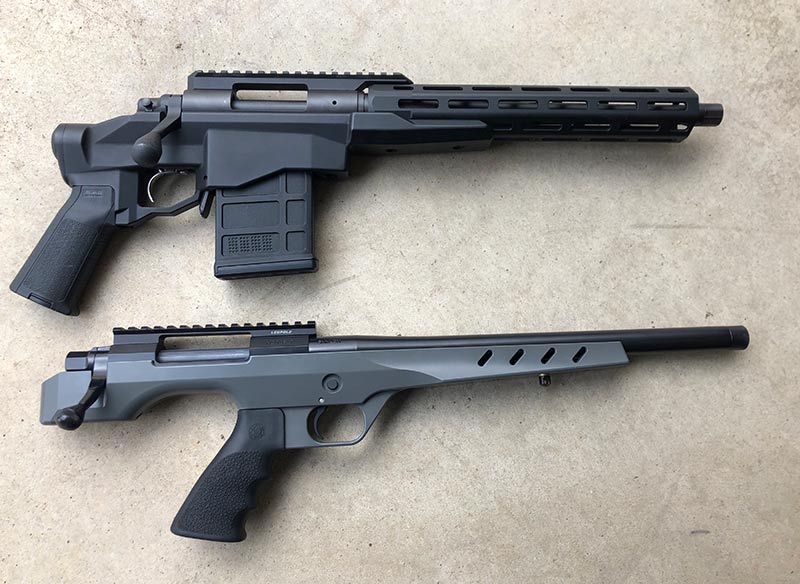 Picking between the Nosler M48 Independence and Remington’s 700 CP is surprisingly more apples and oranges than a straight-up comparison. With different grip frames, barrel lengths, caliber families, and price points, hunters and handgunners alike have two new specialty handgun platforms from which to select. 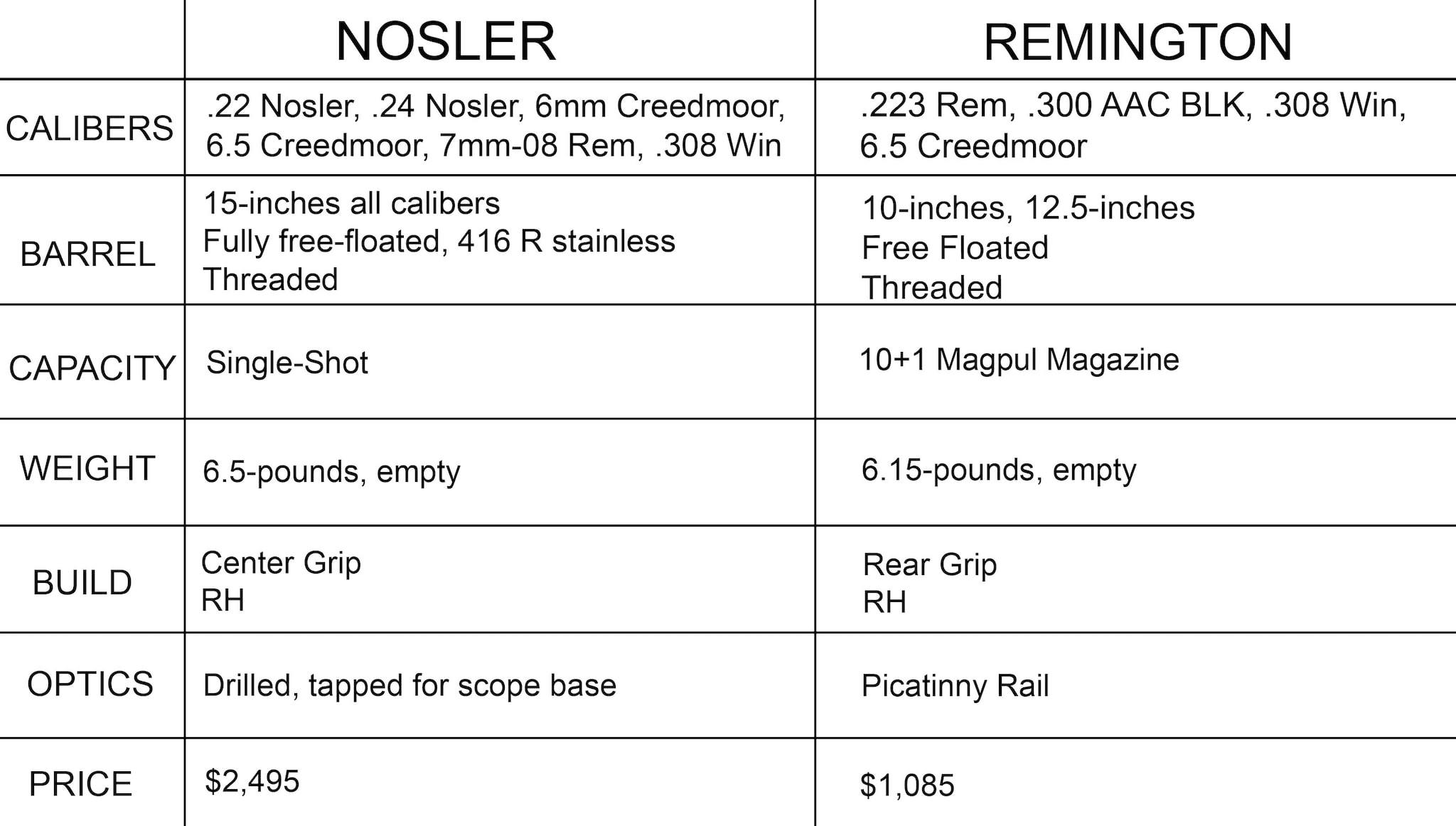 A quick side-by-side of specs for the Nosler M48 Independence and the Remington 700 CP. (Photo: Guns.com)