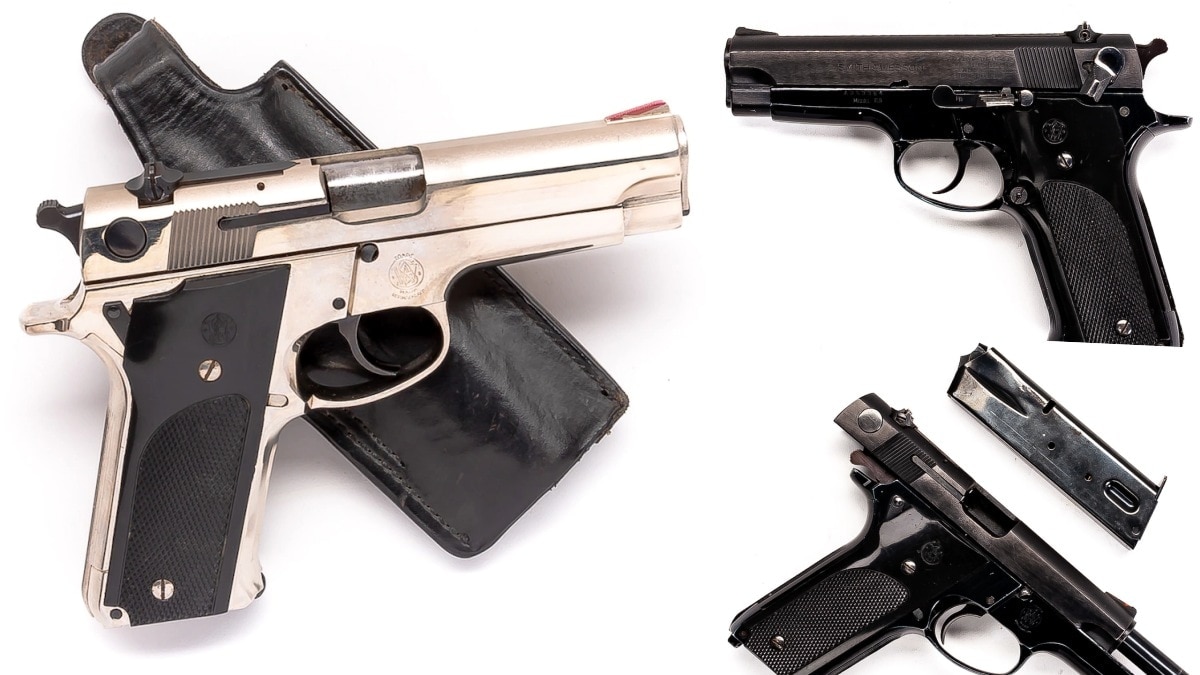 Like bellbottoms and disco, the Model 59 was 1970s cool in a red-and-white striped Ford Gran Torino kinda way. (All photos: Guns.com)

One of the more key developments in American semi-auto pistol history, Smith & Wesson’s Model 59 sprang on the scenes in 1971 and gave birth to the company’s “Wonder Nine” period.

Just four years after the end of World War II– a conflict in which the U.S. Army became well-acquainted with modern double action semi-auto combat pistols such as the Walther P-38— the Pentagon embarked on a light DA 9mm pistol program. To win what could have been a juicy contract to replace the M1911A1, Colt, S&W, and High Standard all submitted prototype designs for Army trials in the 1950s.

While none of the pistols proposed met with acclaim from the Army, who chose to just keep their .45ACP Government models for another 30 years, Smith’s test gun, the T4/X100, went on to become Big Blue’s Model 39. Using an aluminum alloy frame and an 8-shot single stack mag, the Model 39 entered production in 1955 and was the first popular U.S.-made 9mm pistol on the consumer market. 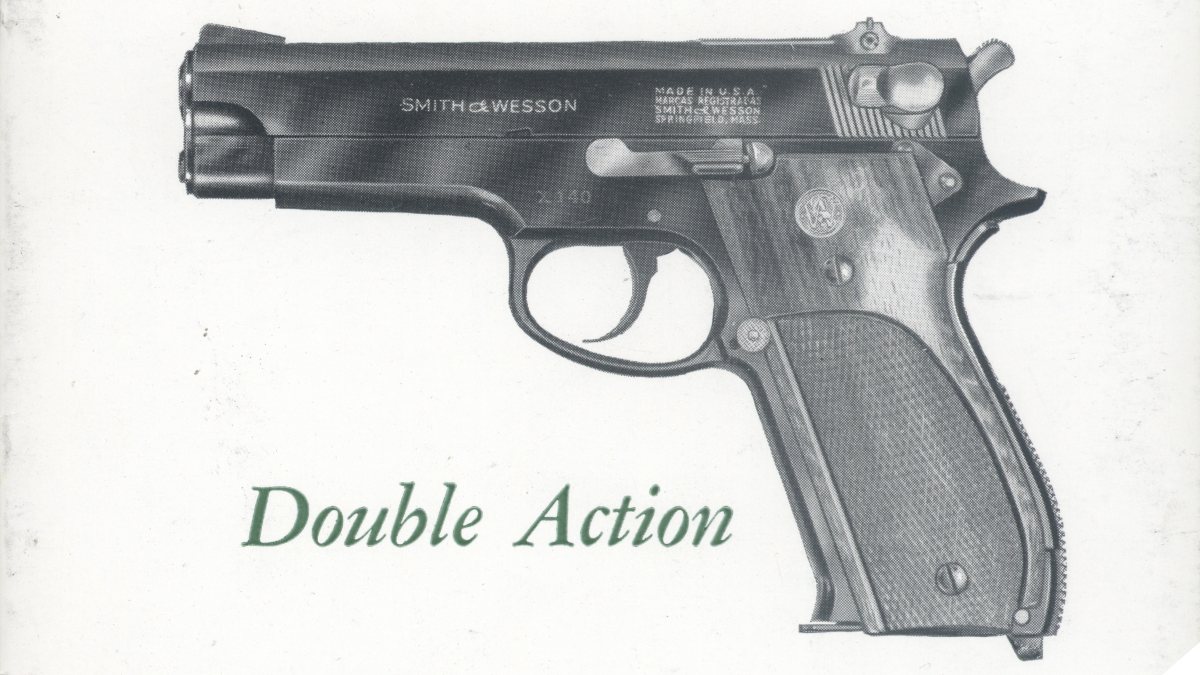 S&W used the fact that the Model 39 was double-action as key in their marketing, as single-action semi-autos such as the M1911 and Browning Hi-Power were its direct competitors. (Photo: S&W)

In 1968, the Model 39 received a big nod when the Illinois State Police adopted the firearm, the first large American law enforcement agency to chose a semi-auto in a world where everyone carried wheel guns. The ISP ordered more than 1,700 of the new 9mm S&Ws and others soon followed.

Why all this talk of the Model 39 when this article is supposed to be on the Model 59? Well, because in the Vietnam conflict, with the earlier single-stack modified to take a double-column magazine as a special purpose suppressor vehicle for Navy SEALs dubbed the “Hush Puppy.”

By 1971, S&W hit upon the idea to make the double-stack Model 39 a standard offering in their catalog, and the Model 59 was born. Gone was the Model 39’s checkered wooden grips, replaced with black plastic, protecting a 14-shot magazine well. 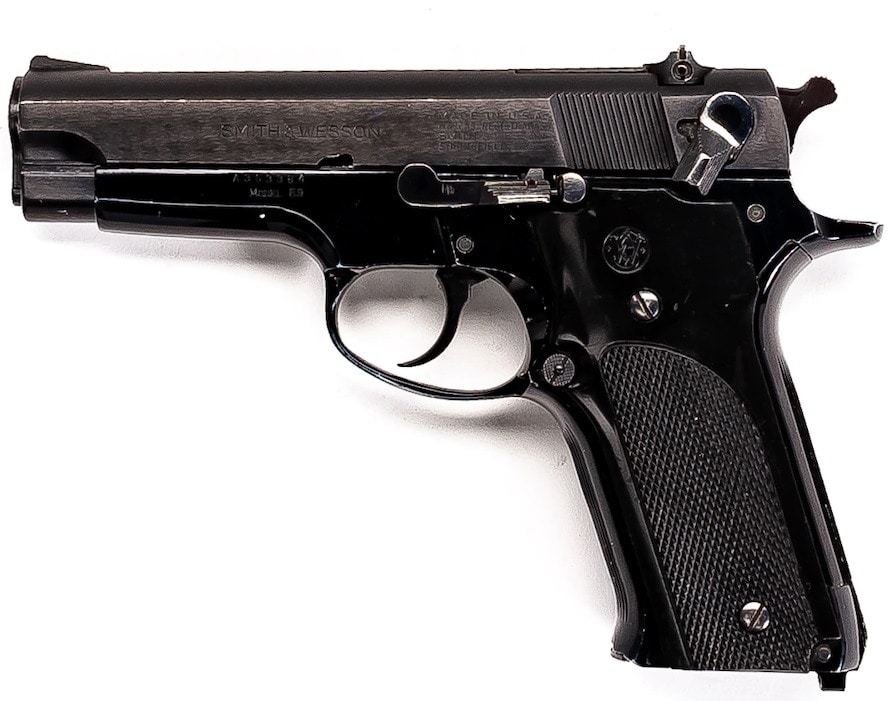 Offering a 14+1 capacity, the Model 59 was still fairly light, at just 27-ounces. With a 4-inch barrel, the overall length of the pistol was 7.5-inches. This put it smaller than the Browning Hi-Power, which it also bested very slightly in capacity. 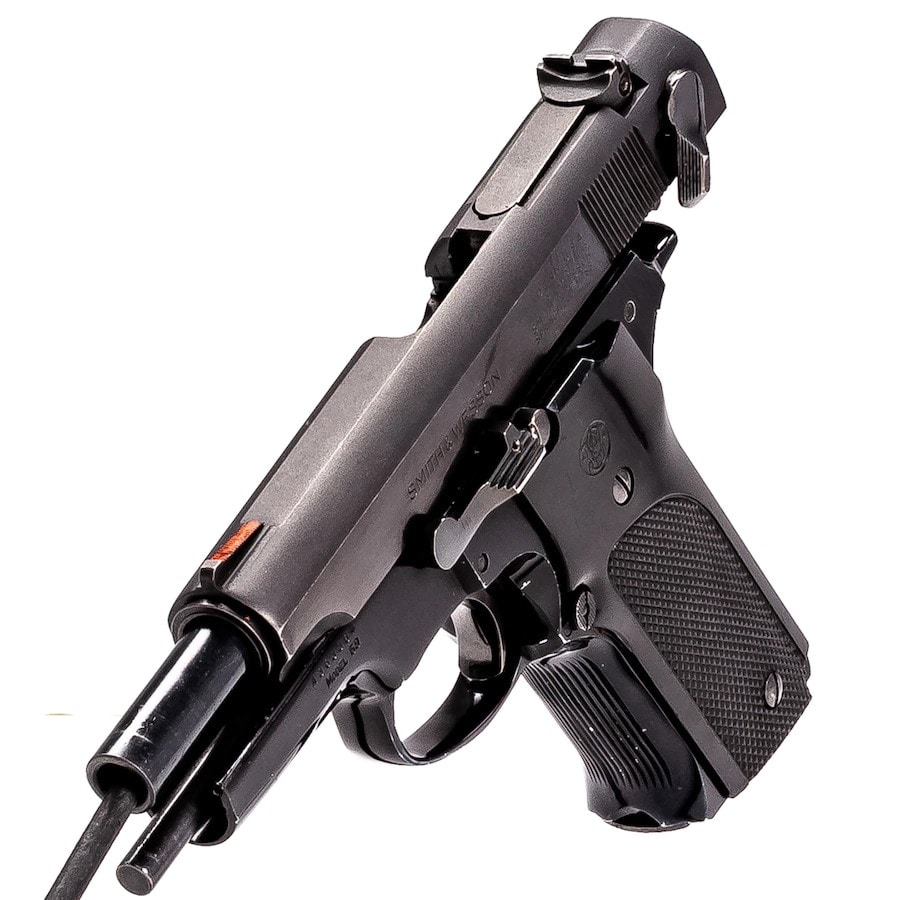 With nearly double the magazine capacity of its Model 39 forerunner, the sights on the Model 59 were much the same and consisted of a fixed serrated front ramp with a rear adjustable for windage. 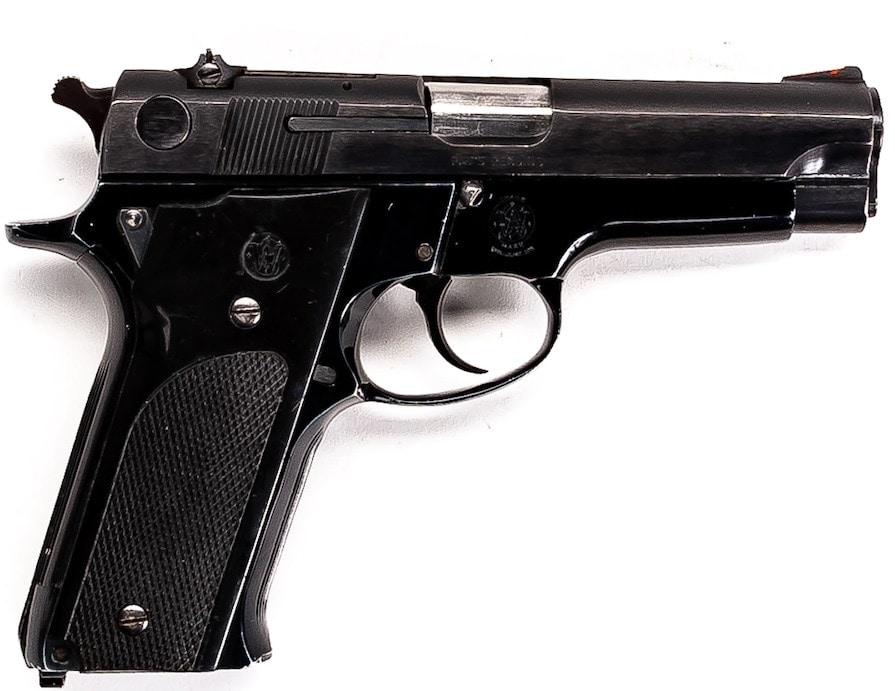 Soon after it was released, the Model 59 proved popular in LE use, with Massad Ayoob detailing the Wrentham, Massachusetts, PD may have been the first to adopt it. By 1974, Las Vegas Metro was carrying the M59. Some departments of the era reportedly compromised by issuing the Model 59 while buying a smaller stock of Model 39s for use by detectives and those with hands too small to wrap around the larger grip of the double-stack.

Heck, the sought-after pistol even made it into the original Starsky and Hutch TV series as Starsky’s duty piece.

Gun writer Claude Hamilton, writing in the July 1978 issue of American Handgunner, chronicled the increasing adoption of the S&W 59 by police, with some alacrity, albeit echoing concerns about period 9mm loads.

“[T]here is a school made up of those dissatisfied with the limited firepower of revolvers and their clumsy reloading characteristics, and more than one large police organization has recently rearmed with either the Smith & Wesson Model 39 or 59 semi-auto pistols in 9mm,” said Hamilton before qualifying the latter by stating, “This cartridge is not one looked on with much favor by the officers I know.” 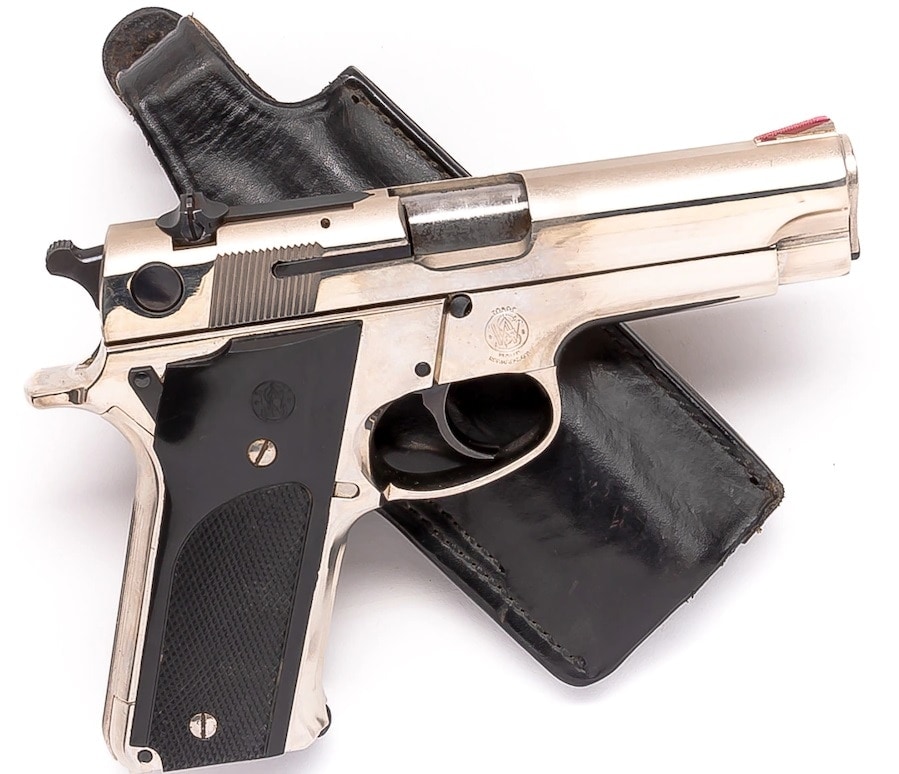 The Model 59 was available in blue or nickel. 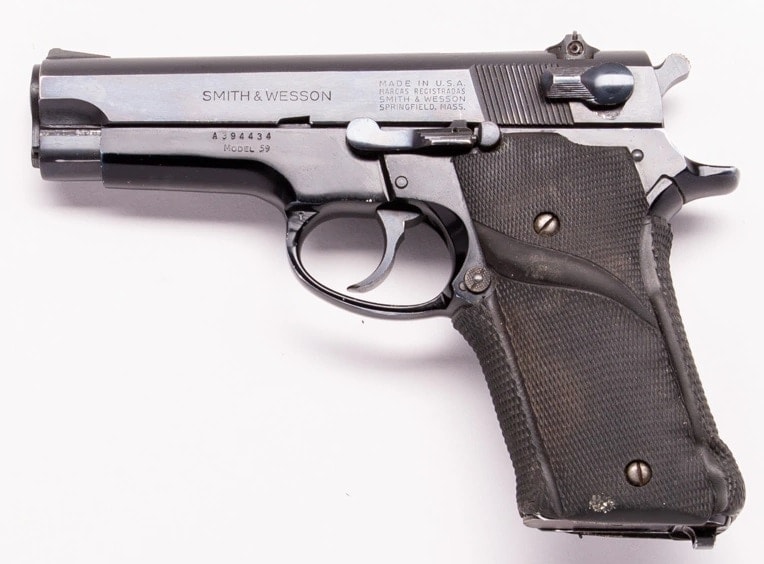 They are often encountered today with their standard black plastic S&W-branded grips replaced with aftermarket options that provide better ergos, such as this example with well-worn Pachymayr signatures.

In 1979, Smith began moving on from their inaugural semi-auto pistol line and introduced the Model 439, the first of their Second Generation pistols. This saw the Model 59 upgraded to the Model 459 when in 2nd Gen format, easily recognized by its protected rear sight. In 1987, S&W would move on to their Third generation models, which saw the 59/459 further improved into the 5900 series. 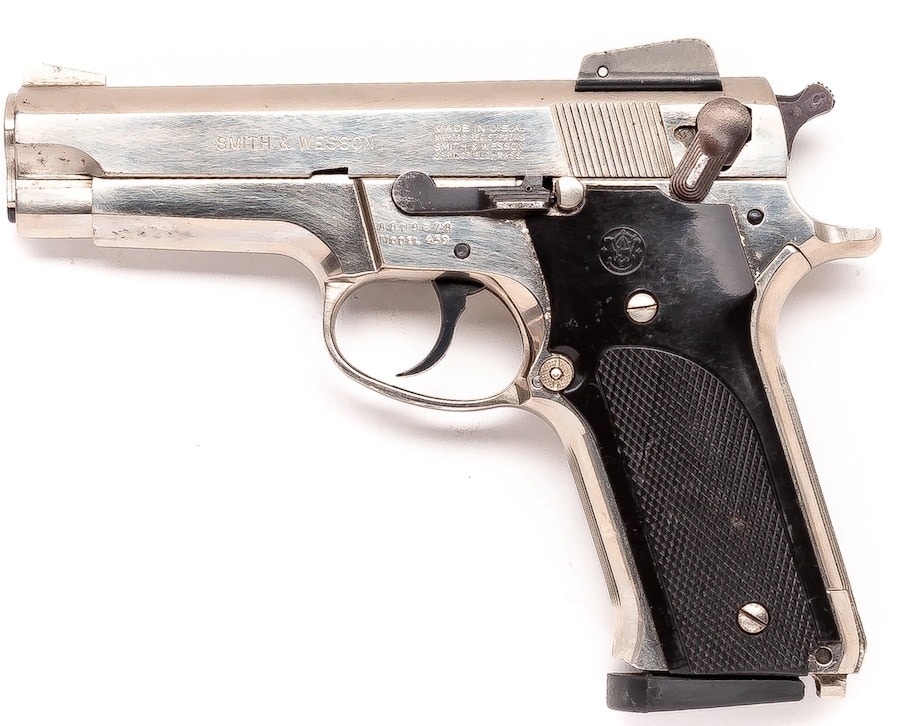 The Model 459 later competed against the Beretta 92 in the Army’s 1980s pistol trials, but that is a different story. This particular 459 is nickel-plated while its companion, the 659 of Reservoir Dogs fame, is stainless.

With newer designs on the market, production of the Model 59– as well as the slimmer Model 39– halted in the early 1980s with Jim Supica reporting that approximately 231,841 M59s were produced.

Not a bad run for a decade.