Nebraska-based ammo maker Hornady on Wednesday announced a new short-action cartridge designed to push the limits while at the same time big name gun makers unveiled rifles for it.

Based on the 6.5 Grendel case, the new SAAMI-approved Hornady 6mm Advanced Rifle Cartridge, in a nutshell, was designed for a military user that wanted a round delivering comparable ballistics to a .308 Winchester from an AR-15 platform.

“The 6mm ARC began with a simple question: What can we do with today’s technology to maximize the performance of the AR-15 platform?” said Hornady Ballistician Jayden Quinlan. “We subsequently modeled and tested a variety of designs in different calibers until we were able to produce the most flexible cartridge possible within the limits of the AR-15 system.” 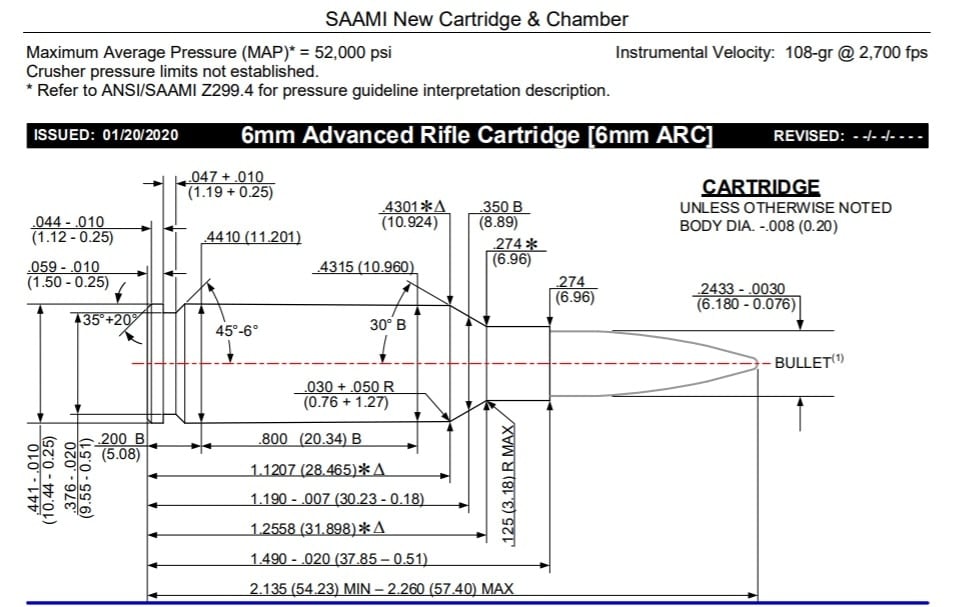 While Hornady is dubbing it the “6.5 Creedmoor of the gas gun world,” the new round can also be used in a mini-action bolt gun as well. (Image: SAAMI)

The 6mm ARC will be offered this year in 105-grain BTHP BLACK, 108-grain ELD Match, and 103-grain ELD-X Precision Hunter loads by Hornady.

When speaking about ballistics performance, the BTHP Black, for example, is billed at producing a muzzle velocity of 2750 fps which translates to 1,763 ft./lbs of energy. When dialed out to 500 yards, the same bullet is still going 1,963 fps and ready to deliver 898 ft./lbs with a -44.9 inch drop in trajectory. The ELD-Match round boasts a G1.536BC.

Hornady said they will also support reloaders who want to brew their own 6mm ARC with a range of Hornady bullets, dies, and components. Reloading data will be available on the Hornady Reloading App.

For a 23-minute deep dive into the development and range of options, the new 6mm ARC brings to the table, check out the below interview with Jayden Quinlan.

But who makes the rifles for it?

Hornady has been doing a lot of legwork on partnering with rifle makers to produce platforms to accommodate the new round. The list of company’s that have a 6mm ARC-chambered gun headed to market reads like a “who’s who” of the AR world and includes APF Armory, Barrett, Brownells, Christensen, CMC Triggers, CMMG, GAP, Geissele, Howa, Lantac, Mossberg, NEMO, Noveske, Odin Works, Proof, Radical Firearms, SanTan Tactical, Uintah Precision, and Wilson Combat.

Barrett announced this Wednesday they have been supplying their REC 7 rifle to the U.S. military in the new 6mm ARC offering as part of a Pentagon contract secured last year.

“Carrying 24 rounds in the magazine, the 108 gr. ELD Match bullets leave the 18-inch PROOF Research match-grade stainless steel or carbon fiber barrel at over 2,630 fps,” said Barrett in a statement. “This easily gives the rifle supersonic capabilities past 1,000 yards.”

Ryan Clecker with Gun University got his hands on a 6mm ARC-chambered Barrett REC 7 and gives the rundown chasing it out past 600 yards, below.