The 75mm M116 Pack Howitzer was designed in the United States in the 1920s. It met a need for a compact artillery piece that could be moved across difficult terrain, replacing the 1900s-era Vickers Mountain Gun previously used for that purpose.

Having a total weight of just 1,340-pounds when combat-ready, it was light enough to be towed by a truck or jeep, however, that is not its best attribute. Typically referred to as the “Pack Seventy-Five” the gun was designed so that it could be broken down into several pieces to be carried by pack animals such as mules. Pieces weighed between 160- and 235-pounds each.

The M116 required a crew of six and could fire a shell up to 9,500 yards– a little over 5 miles. It had a muzzle velocity of 1,250 feet-per-second, which sounds low but keep in mind this was for a 14.7-pound shell. The rate of fire was 3-to-6 rounds per minute, depending on the hustle of the gun crew.

The gun saw combat in World War II with the U.S. Army, primarily by airborne units, with paratroopers using them either landed in the knocked-down form delivered via silk or as fully-assembled guns landed by gliders. A series of special “paracrates” was designed for the gun to be dropped in nine disassembled loads to include a starter-pack of 10 shells and support gear. Provided the airborne cannoneers could find all of the pieces to reassemble the gun quickly, they were in business. Original caption: “Artillerymen of 463rd Paratrooper Battalion prepare to fire 75MM Pack Howitzer in snow-covered position near Haguenau, France, 1945. This gun can be broken down into six pieces and dropped to the position by parachute.” (Photo: Pvt. William E. Miller/U.S. Army via Library of Congress)

The gun also proved useful in fighting on islands across the Pacific, where its small size came in handy on inland trails carved through the jungle. It was also supplied to foreign forces. 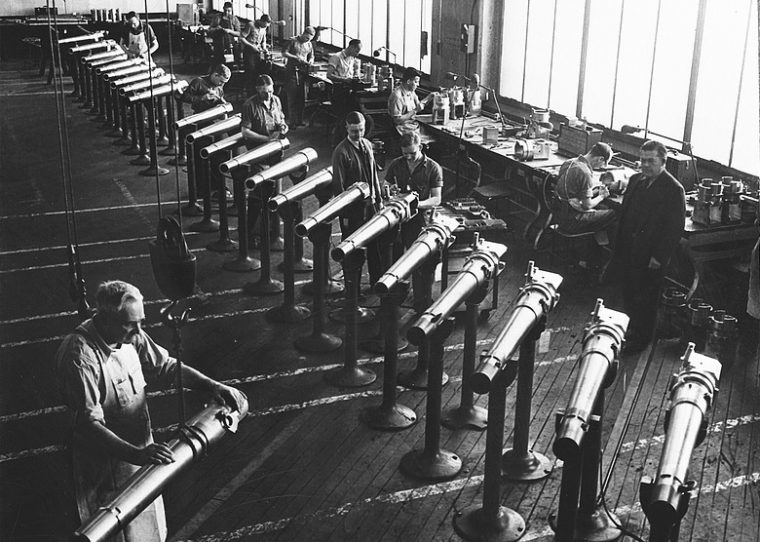 In addition to the U.S. Army’s Watervliet and Rock Island Arsenals, at least four commercial factories turned out M116 howitzers and their carriages during WWII– including General Electric who converted their Erie, Pennsylvania streetcar motor factory, above, to make the guns. (Photo: Library of Congress)

In all, some 4,939 of these handy howitzers were produced and the gun remains in service in some third world countries and ROTC units as saluting guns while over 75 are on display across the country, often in museums or in VFW parking lots– in demilled format.

But some in private hands aren’t demilled. 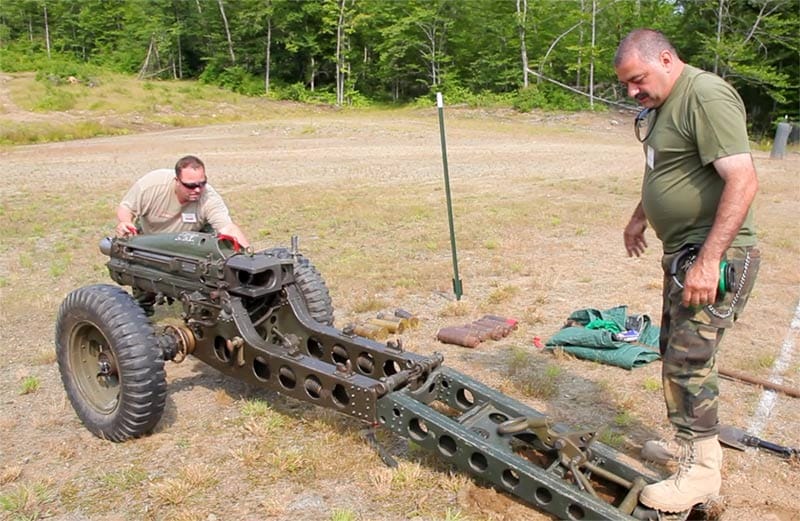 Dom Spano (right) and his friend set up his circa 1943 G.E.-produced 75mm M116 Pack Howitzer at the Green Mountain Boys machine gun shoot in Eden, Vermont in 2014. (Photo: Ben Philippi/Guns.com)

The war-era G.E.-produced M116 featured in the video above belonged to Dom Spano. He collects artillery, military vehicles, and select-fire weapons. He brought his M116 to the Green Mountain Boys machine gun shoot in Eden, Vermont in July 2014. Although he never ran the serial numbers to see if his gun saw action in WWII, he was pretty confident that it had.

Civilian ownership of a working artillery gun, or destructive device, is regulated by the National Firearms Act of 1934, with exceptions for black powder cannon. It’s not unlike owning a machine gun or suppressor. You must live in a state that allows ownership of such items, have a Type 01 Federal Firearms License, (FFL) a Special Occupation Tax (SOT) to sell, and an ATF Form 4 (transfer of registration) with $200 tax stamp to purchase. 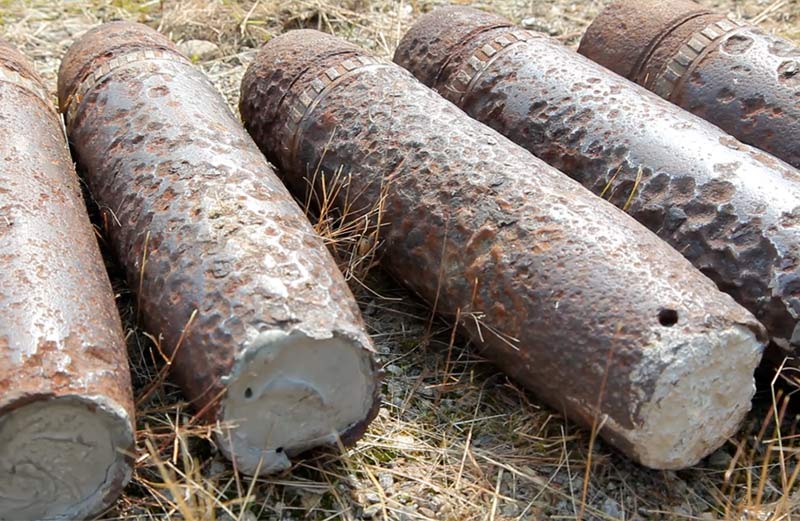 Solid 75mm rounds that were found in a scrapyard in Kentucky. (Photo: Ben Philippi/Guns.com)

Spano estimated the value of his M116 to be around $30,000. Many machine guns can cost far more than this. Finding ammunition is often the hardest part of owning a howitzer. The ammo seen in the above video was located. It had been lying around in the dirt and water for many years, hence the corrosion.

Shell casings can be fired many times. With a little tape, the rounds fit the cases. Primers need to be made. Then, just add powder and you’re all set to go. The only real moving part on Spano’s M116 was the recoil system. “As long as it’s maintained properly, the gun fires reliably and safely,” he said.

If you enjoyed the video above, below are a few more videos of large caliber weapons. Enjoy.