With fairly quick prep time, this zippy appetizer is sure to impress guests and is a delectable way to use small cuts of meats like goose, duck, or dove breasts instead of the standard big game tenderloin. These jalapeño poppers can also be made ahead and then grilled over an open fire, smoked on a pellet grill, baked in the oven, or done in an air fryer. Simply adjust the cooking times accordingly so the meat is finished to medium-rare to remain tender and the bacon is crispy. If oven baking, using a broiler pan or something similar allows the bacon fat to drip-free and create better crisping.

Begin by washing and drying your peppers. Pro tip: wear gloves while handling peppers or wash your hands thoroughly before touching your eyes. Slice the peppers lengthwise, leaving the stem intact if you like the look. Use a teaspoon to scrape the seeds and other internals free, discarding them.

Because of the early seeding/de-veining step, the jalapeños have little heat. Even my family, none who favor anything hotter than ketchup, enjoy these. If, however, you like a bit more kick in your bites, there are a couple of options. You can always leave some of the seeds intact for the jalapeños, but for a more tongue-blazing spice, step to a Serrano Pepper. These are similar in size and taste to the jalapeño, but two to three times hotter. 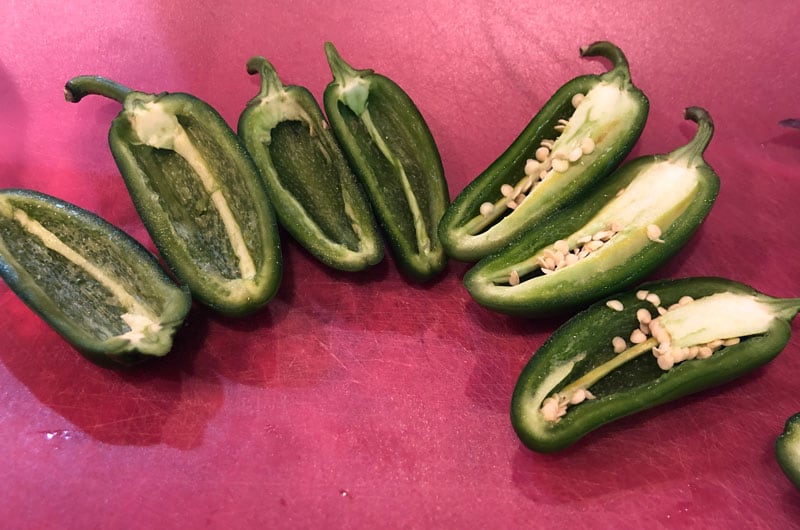 Slice the jalapeños in half lengthwise and make sure to get all the seeds, unless you like heat. (Photo: Kristin Alberts/Guns.com)

Start stuffing the jalapeños with a healthy layer of cream cheese. This is where you can make the recipe your own. Sometimes I’ll add diced chives to the cream cheese, and other times, a bit of garlic or smoked paprika. I can also just use the cream cheese plain, and the flavors still pop.

After the poppers are filled close to the top with cream cheese, sprinkle generously with shredded cheese. Pro Tip: press the shreds of cheese into the cream cheese a bit, so they don’t fall out as easily. Next, lay one thin strip of tenderloin over each pepper. Seasoning the meat is optional. The peppers, cheese, and stuffing offer the right amount of flavor, so most often, only a dash of salt and pepper is needed. Be sure the meat is either tender on its own or marinade it ahead of time. The last thing you want is to bite into the popper and have the meat stretch like a rubber band.

With the filling layers in place, it’s time to bundle those tender and tasty little morsels in bacon, because, well, bacon! Use one slice for each pepper, starting at one end of the pepper and wrapping it to the other end. Thinner bacon is sometimes easier to maneuver than thick, but use whatever you like, with bonus points for using local pig. If needed, pin down the ends of the bacon with toothpicks, but often the ends can simply be tucked under and will cook into place just fine. If your peppers are small, consider slicing the bacon in half lengthwise. 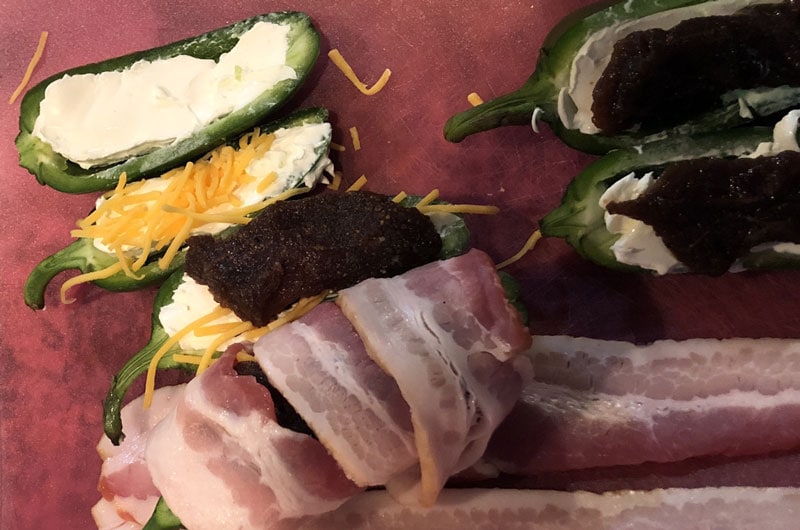 Place the completed poppers on the grill. We like to use a stainless grilling tray with smaller holes to avoid anything falling through the grates of our Camp Chef. Speaking of Camp Chef, a little extra smoke is never a bad thing, so we run these on low smoke for about 20 minutes; otherwise, medium heat is just fine. You’ll know they’re done when the bacon is crisp on the exterior, and the tenderloin is medium-rare. Do not turn the peppers during the cooking. They’ll get perfectly cooked and crisp without additional handling.

If you’re out camping or hunting, these can be assembled ahead of time and grilled or baked up to a day later. The poppers will be ready to serve right off the fire. Before plating these delightful bites, however, drizzle each of them lightly with real maple syrup. The contrast of natural sweetness with the heat of the pepper and smoke of the bacon takes this recipe up one more notch and is sure to please. 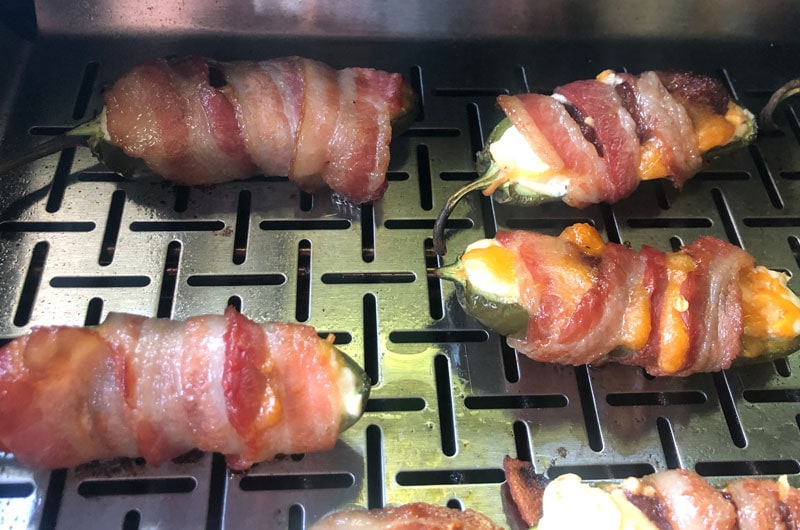 These grill up nice in our Camp Chef Woodwind pellet smoker. They can also be done in the over or an air fryer. (Photo: Kristin Alberts/Guns.com)

Homemade stuffed poppers are great with any kind of wild game tenderloin. It’s an appetizer and a treat that uses only a small amount of game but goes a long way on flavor and flair. Perfect as a precursor to a nice dinner or as a standalone hunting campfire grub!

Need to stock up on wild game? Gear up with guns, ammo, and optics at Guns.com before heading to the fields.