10 things you need to know about the 22 Nosler 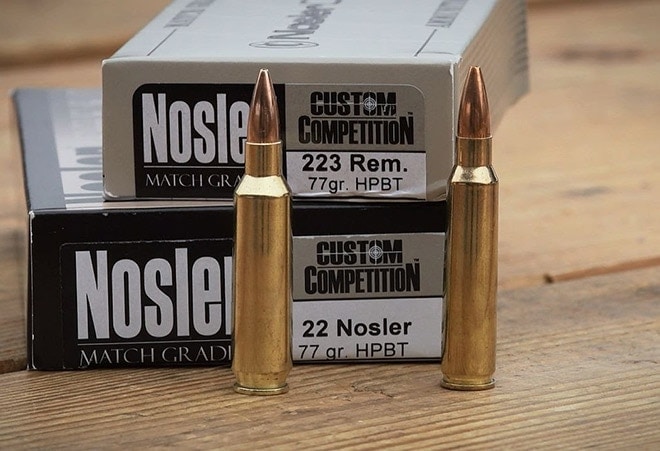 The Nosler Corporation has been running gangbusters on new cartridges in the last few years, setting their own field of chamberings from sleek long-rangers to heavy hitting hunters.  Think 26, 28, 30, and 33 Nosler.  So what’s been missing from the numbers gauntlet?  A smaller, zoomer of a round, that’s what, and they’ve even wandered out of their bolt-action comfort zone to fill a niche in the AR-platform market.  Enter the 22 Nosler chambering, introduced at SHOT 2017 as ammo, brass, uppers, and full rifles.

Here’s what you need to know about the new round.

The 22 Nosler was born from the company’s mission to create “the most powerful .22 caliber centerfire cartridge that would reliably function in the AR platform. Doing that means trumping one of the most adored and accepted calibers on the planet — the .223 Rem / 5.56 NATO.   And they succeeded with this baby-Nosler, boasting greater case volume, velocity, and energy. 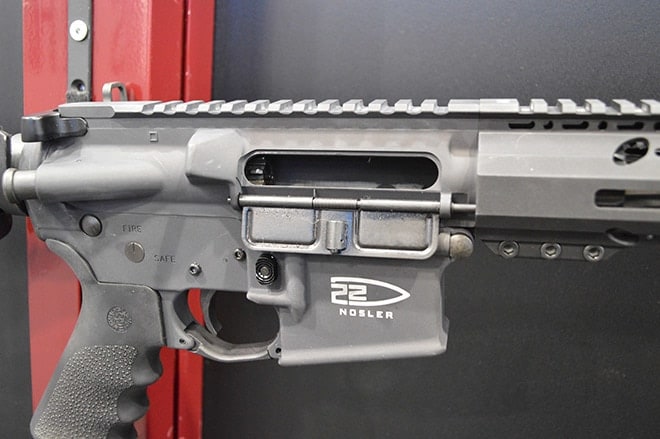 When new cartridges emerge, one of the first questions is “what is this based on?”  In a move seldom seen these days, the 22 Nosler is its own animal entirely.  There is no parent cartridge.  The closest design out there is the 6.8 Rem SPC — that has been lengthened, necked down to 22 caliber, given a 30-degree shoulder, and had the rim rebated to 0.378 inch.  Or, you could say it is a 30-30 Win that has been shortened, necked down to 22 caliber, and given the aforementioned shoulder and rim rebatement.  In the end, it’s easier to call it what it is—a new cartridge. 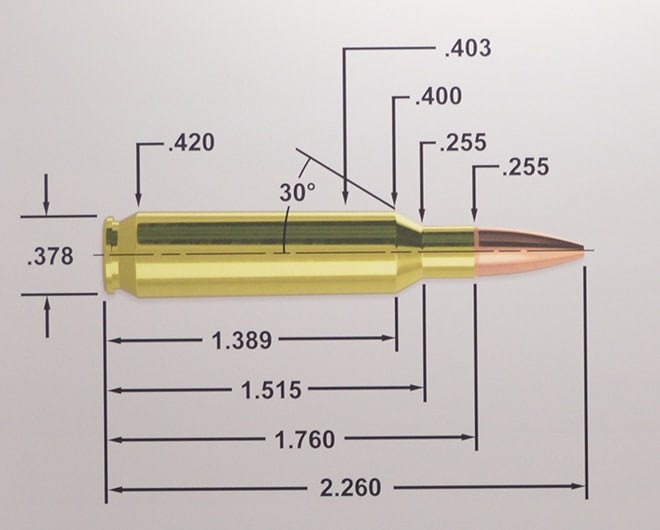 At 1.760 inches, the 22 Nosler measures the same length as the .223 but advertises 25 percent more case capacity.  Bolt face dimensions are identical for both the classic .223/5.56 as they are for the new 22 Nosler.  SAAMI max pressure for both the .223 and 22 Nosler is 55K psi.  Due to the larger circumference of the 22 Nosler round, however, it will neither seat nor feed from from a .223 magazine.  Rather, mags from the more similarly sized 6.8 Rem SPC must be used. 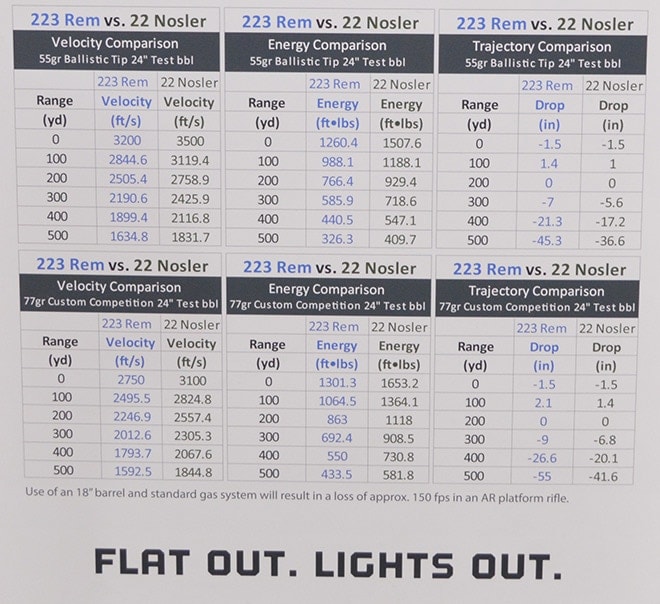 5. It comes in threes

If you’re looking for factory ammo, the only trio of loaded offerings currently come from Nosler.  They are: Trophy Grade Varmint 55 grain ballistic tip, Match Grade 77 grain, and Varmageddon 62 grain.  Brass, dies, and components are also already available from Nosler, and now RCBS and Redding are also adding 22 Nosler dies to their catalogues. This is not yet a cheap rifle to shoot, and as such, will attract plenty of handloaders, both to customize the loads and save some cash.  Load data here. 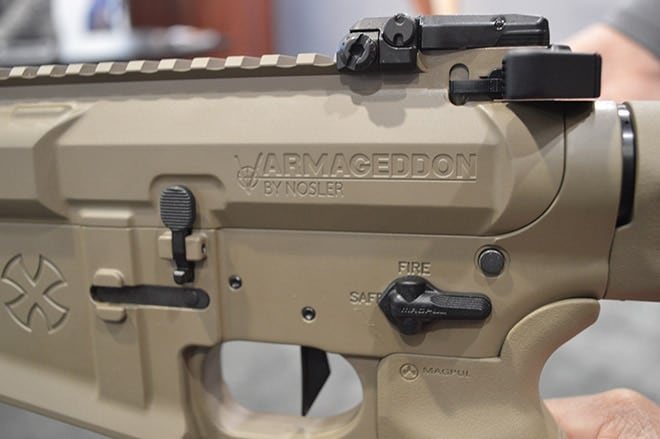 The Varmageddon partnership of Noveske and Nosler chambered in 22 Nosler. (Photo: Kristin Alberts)

6. You don’t need to buy a new rifle to shoot it

The neat thing is that you need not buy a new rifle to fire the 22 Nosler.  In fact, the big initial push was in offering complete uppers for user’s existing .223 rifles.  All the transformation technically requires is a barrel and mag swap, with the 6.8 SPC magazine working perfectly for feeding this new beast.  If you don’t want to rebarrel your current AR, it’s much easier and cheap enough to pick up a full upper with a bolt group.  MidwayUSA was running great deals on complete uppers under $400 recently.

If you don’t’ want to go the AR upper route, there are plenty of full rifle offerings either already on the market or shipping very shortly.  Keep an eye out for these: Colt Competition, Noveske, Stoner, War Sport, AXTS/Radian, Barrett, NorthTec Defense, Proof Research, Midway/Bear Creek Arsenal, and X-Caliber.  We just did a full review of the Noveske Varmaggedon rifle in 22 Nosler (forthcoming), and that will be a tough one to beat if money is no object. 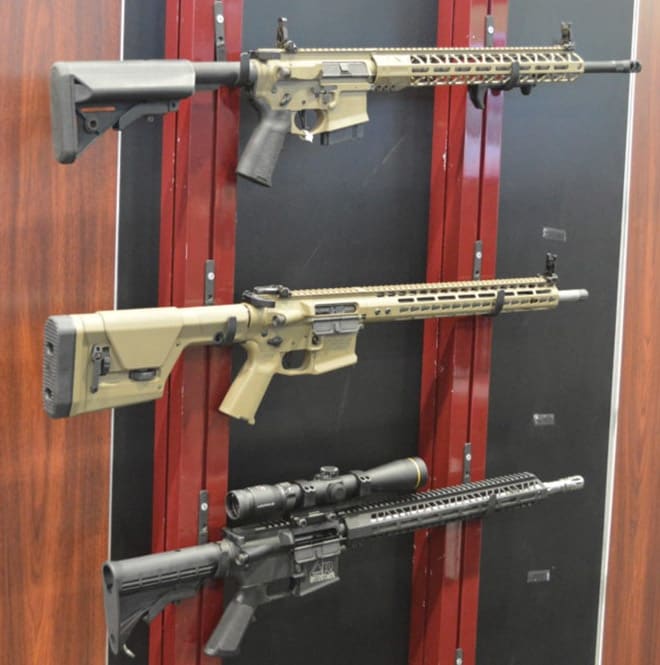 Nosler displayed full rifles in 22 Nosler from not only Colt, but also these three from top-bottom: War Sport, Noveske, and Stoner. (Photo: Kristin Alberts)

Just when you thought the 22 Nosler was only for AR-platform semi-autos, think again.  Nosler is known for excellence in long range bolt actions, and the natural progression meant we’d see one sooner than later.  They have been producing limited numbers of their Nosler Model 48 chambered in this new round.  We’re not sure it’s quite as appealing in a bolt gun, because, well, a 22-250 does things a little better there in terms of ballistics and ammo availability.  But if you love the round or already own one in a semi-auto, the bolt guns are a nice and oftentimes lighter option than the heavy-barreled AR’s.

So we’re talking greater capacities and faster speeds than much of what’s currently on the market, and the combination of speed and pressure brings the consideration of barrel burners.  What is the expected barrel life of the 22 Nosler?  According to the company, “it really depends on how they are treated, but one should see approximately 2,000 rounds as used in competition and as many as 4,000 rounds if used as a plinking rifle.”  That’s really nothing to worry about as far as barrel burners go, with many specialized chamberings wearing out twice as quickly.  The average user will never have to worry about wear or replacement. 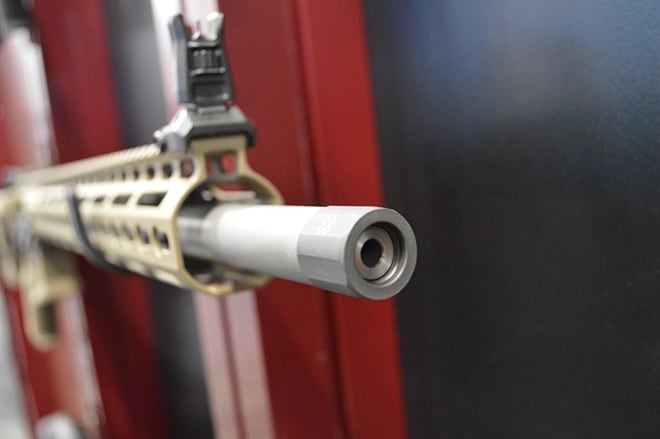 10. Ready for the reloading bench

Reloaders take note: Because the 22 Nosler does not have a parent cartridge, there’s no good way to scrounge or fire-form brass.  Luckily, brass is available from Nosler in 100-count boxes for a price around $70. The round uses small rifle primers.  Naturally, full-length resizing is highly recommended for sure functioning in AR-platforms. Reloading is otherwise very straightforward with a plethora of 22-caliber bullet weights out there.  I’m sure we’ll see any number of worked-up loads that exceed even factory ammunition claims.  The sky’s the limit for the 22 Nosler on the loading bench, with potential for match-grade accuracy.