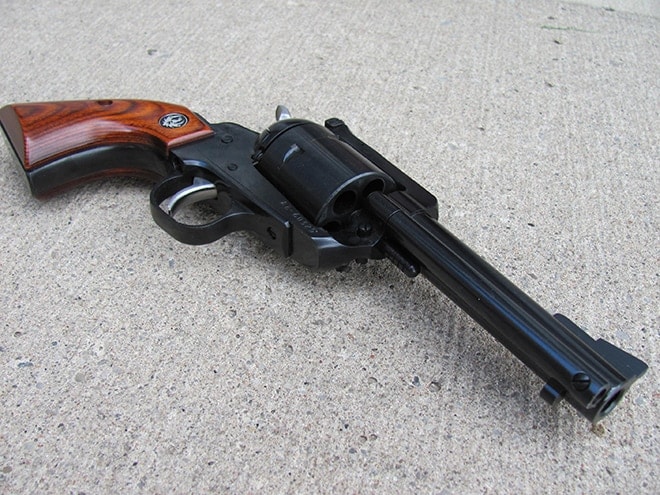 Ruger has staked their reputation on building tough, reliable firearms at a reasonable price for years now. Common descriptors of their guns are “working-class”, “practical”, and perhaps most commonly, “overbuilt”.

While I’m not sure the first two fit the bill of the Super Blackhawk, the last one certainly does, and I love it—this .44 Magnum big-bore revolver is so tough handloading manuals include information for use in them exclusively.

You can’t get a much better endorsement on durability than yet, perhaps surprisingly, the Super Blackhawk (SBH) isn’t just tough, it can also be super fun to shoot!

(Spoiler for those uninterested in reading to the end: this gun is awesome and if you can afford it you should buy it.) 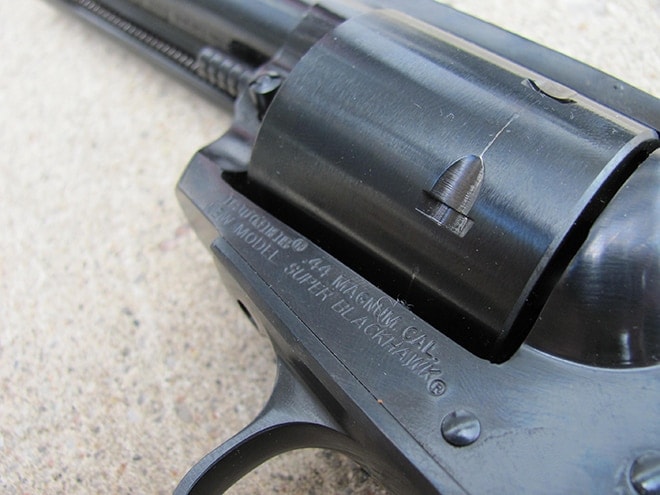 The SBH is one of Ruger’s oldest designs. It’s a single-action revolver with some modernizations based off the Colt guns of yore and a variety of SBH models have been available over the years. The most common SBH I see is the .44 Magnum, and that’s what I’m reviewing here.

The example I’m reviewing is a big ol’ wheelgun, tipping the scales at a hefty 2.7 pounds and measuring up at 10.5” overall, with the downright stubby 4.6” barrel. The gun comes out of a moulded plastic case with an oversized padlock and instruction manual. It’s listed to sell at $829 MSRP, but I purchased mine for $740. It’s available in stainless and blued (and sometimes more limited production runs with case hardening or other variations), and with fluted or unfluted cylinders.

For the money, you are getting quite a hunk of gun. The SBH’s heft is immediately noticeable though please don’t take my meaning as in an awkward way. Yes, it’s a huge gun, most noticeably the giant cylinder and barrel assembly, but it does not feel silly or overwhelming to me, partly because of the balance and partly because of the traditional cowboy grips that fit nicely in most hands. It balances freakishly well in a single-handed grip. 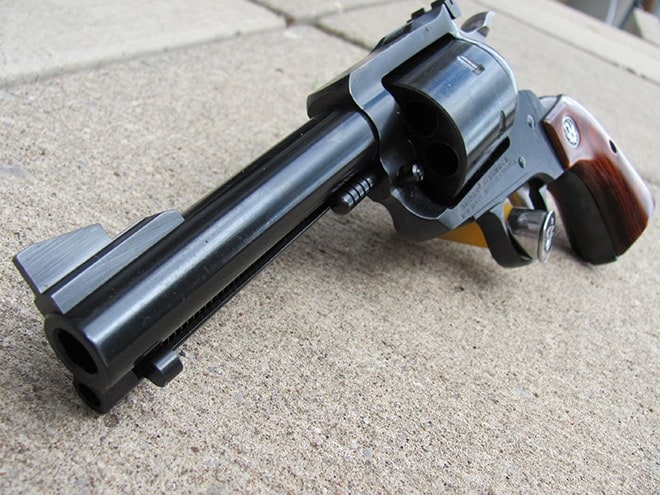 Construction is, in a word, solid. The loading gate on the right side of the gun opens and closes with a good authoritarian “click” and is still comfortably snug on my example after thousands of operations. The ejector rod runs the length of the barrel with a plastic button at the head. This admittedly feels somewhat out of place on such a metal-heavy firearm, but it’s adequately sturdy.

My SBH has a utilitarian blued finish. It’s not a spectacular mirror sheen, but it looks good enough for the price, and I think the contrast with the very nice wood grips it came with makes for a handsome (but still intimidating) revolver. The unfluted cylinder isn’t for everyone, but you can get a more traditional fluted look if you’d like with most models. I think it looks unique. The trigger and hammer are both finished shiny silver, adding nice touches of contrast to the blue and wood. 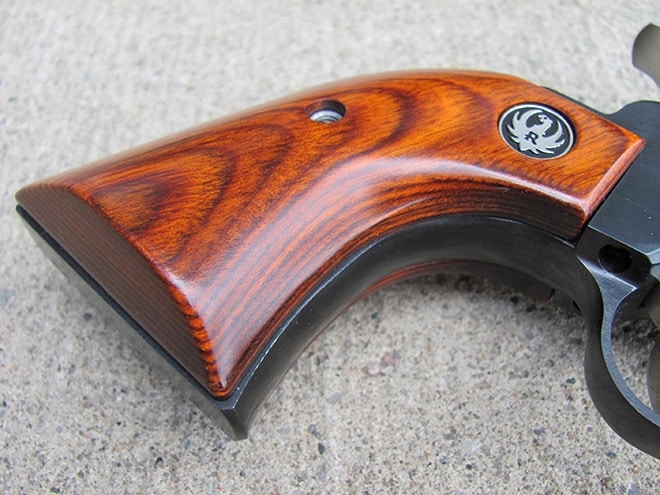 Cowboy grips that fit most any hand. (Photo: Andy C)

From an aesthetic standpoint, I think this is one of the coolest-looking guns I’ve ever owned. It looks even more impressive next to other guns to provide a sense of scale. I personally like the look of the short barrel with a full-length ejector rod housing as well. My gun shipped with no obvious rough areas of machining and a very consistent finish. I was impressed. Even internally, the gun is smooth all-around.

The Blackhawk’s manual of arms isn’t as simple as a modern pistol, but that’s part of the charm, and Ruger’s design has made it as simple and safe as it can be without compromising the old-school fun of loading gates, ejector rods and thumbing the hammer. Unlike Colt’s Single Action Army design, the Blackhawk’s guts are modern. Purists may scoff, but the added transfer bar safety that allows for loading to a full six rounds makes this gun great for those more concerned with shooting than historical recreations. 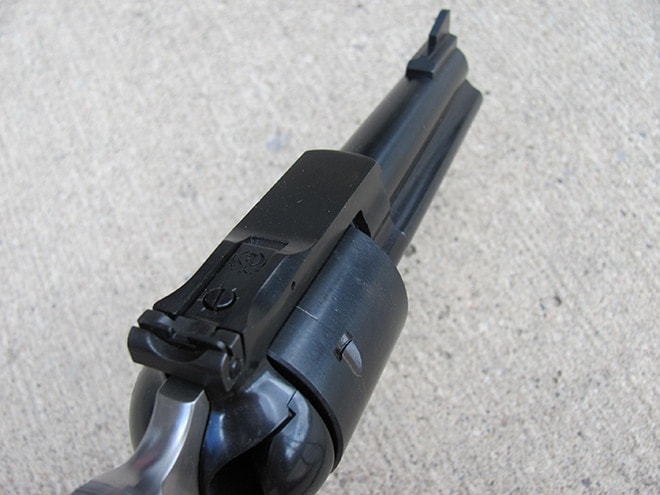 Here’s my only true complaint about shooting this model of SBH: the relatively short length of the barrel does limit the ejector rod as well. Sometimes, the ejector rod can’t completely clear a case from the cylinder, necessitating a manual extraction. A minor inconvenience at worst—and this is the worst thing about the gun I can come up with.

The Blackhawk shoots wonderfully. Cocking the hammer requires an light amount of force, after which a very light, crisp trigger with no creep or take-up to speak of takes only about six pounds of pressure to set off your favourite .44 magnum load. From the factory, the trigger is very good. I don’t doubt a talented gunsmith could make it otherworldly, but for my use, this is more than adequate.

It’s also something of a cliché, but it’s true that the plowhandle grip shape helps the gun roll in your hand with recoil. Combined with the weight of the SBH, it’s comfortable to shoot loads that would feel rather punishing in most double-action revolvers. My wife detests even light Magnum handgun loads, but even she likes a medium-power .44 Magnum cylinder occasionally from the SBH. 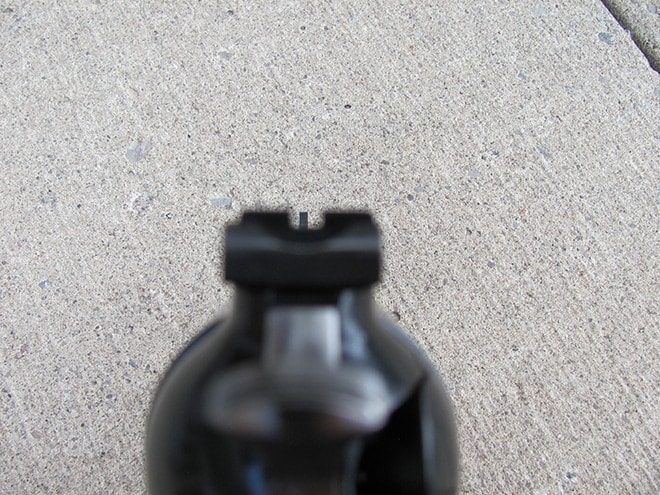 The Blackhawk’s sights are another departure from the common gutter-and-halfmoon fixed sights. Here, you get a modern set of sights adjustable for windage and elevation with a small flathead screwdriver and a tall front post. They allow for quick and accurate shooting. When adjusting, it provides positive clicks and can cover a broad range of elevation, allowing for the full range of .44 Magnum handloads. I have yet to load something up I can’t make shoot to point of aim at 25 yards with these sights.

Speaking of handloads, I’d also like to mention two things to potential Blackhawk owners: one is that this is truly a cartridge chemist’s ideal platform, able to eat up just about anything you want to throw at it. I’ll load mouse-fart .44 Specials and then, using a pre-recorded adjustment to the sights, switch up to blasting fireball-belching magnums in the same range session. This revolver rewards your consistent handloading with repeatable performance. 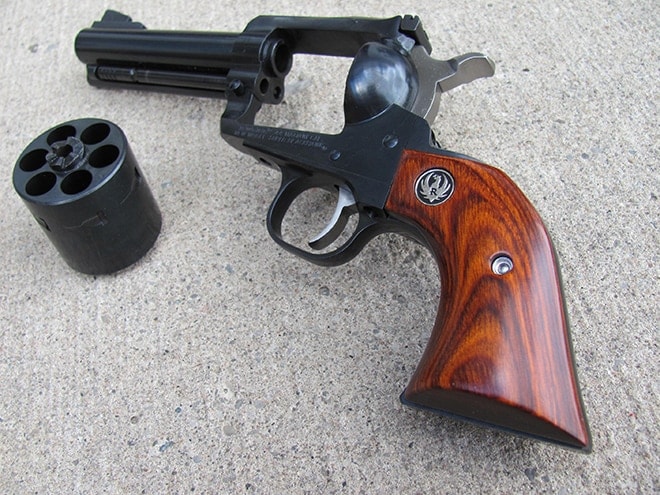 The second is that when loading for the SBH, you have to be diligent about seating primers deep enough. The gap from the backplate to the cylinder is very tight, and a poorly-seated or raised primer will cause the gun to lock up.

When you’re done blasting, tearing down the SBH for clearing is a snap. My revolver’s topstrap and cylinder gap are getting pretty murky from a consistent diet of lead bullets, but the performance is unaffected, and the parts that need cleaning most are easy to take care of.

In thousands of rounds ranging from super-light target loads to heavy lead slugs that punished steel plates with authority, I can’t think of my Blackhawk ever failing to perform—and it’s consistently one of the most fun guns to shoot I own.

Normally, I categorize firearms by function, and recommend them to a specific audience. No gun is really great for everything or everyone. But, assuming you have a pulse and the money, I recommend the Super Blackhawk to anybody even a little interested in single-action revolvers. It’s just such a well-built gun I cannot imagine any owner lacking pure joy over this purchase. I sometimes get lost in either the utility or competitive aspects of shooting, but the SBH always takes me back to why I love shooting in the first place—it’s good, clean fun! 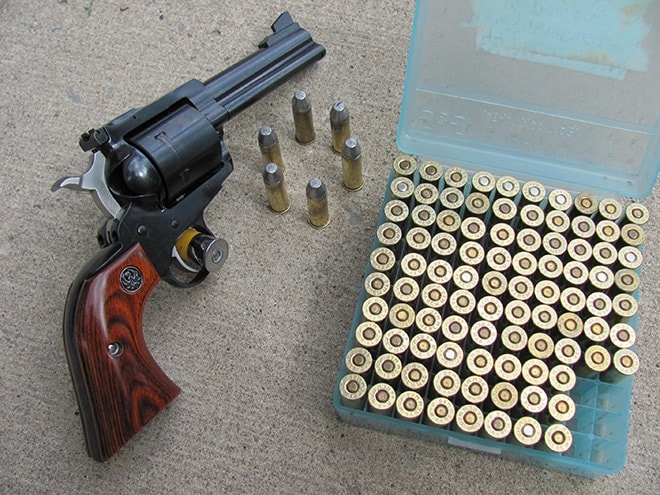 However, if there is one group of people I think could use this revolver over others, it’s handloaders.  This weapon is a handloader’s dream. The .357 Magnum is my favorite cartridge, but the .44 Magnum will provide a great platform to learn on as well, and also accommodates a huge range of recipes to make the type of round you like best. It also provides a huge financial incentive to start handloading—factory .44 isn’t cheap!

Others could certainly use this gun for handgun hunting or wilderness protection, but to be honest, those are secondary in my book as there are better options in my opinion.  My feelings aside, the SBH would work fine if pressed into those roles.

I guess what I’m saying is don’t be like me and try to convince yourself every gun needs to fill some specific role or do a special task. Some guns can just be for fun, and this one is about as fun as it gets.

I think my enthusiasm for this revolver should be obvious. If it’s not, I’ll quickly recap everything here with a list of pros and cons.

In conclusion, you be the judge.