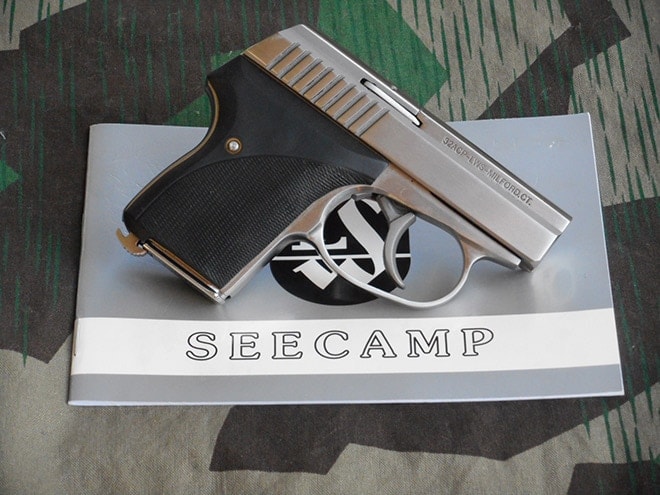 Ask most “gun guys” about .32 ACP carry guns and chances are good you’ll get a lecture about how underpowered the .32 ACP round is for self defense applications. A historically minded “gun guy” might also remark about how it was once considered a law enforcement and military cartridge. They may even mention cheap pocket guns or older classics produced by Colt, Walther, and FNH. The pistol that concerns us today is a modern take on these classics,  Seecamp’s LWS .32 in .32 ACP.

The Seecamp story is interesting to say the least. The company founder and namesake, Ludwig or “Louis” Wilhelm Seecamp was trained as a master gunsmith in pre-World War II Germany’s technical academy system. He was also a German Gebirgsjaeger (Mountain Soldier) who fought on the Eastern Front in WWII.

Gebirgsjäger group in late 1942 during the Battle of the Caucasus. (Photo: German Federal Archives)

During one engagement, Seecamp found himself up close and personal with an enemy Russian soldier. Unfazed after receiving a bullet across his cheek — an injury that would also leave him missing teeth — he unholstered his double action (DA) Walther P38 and killed his foe without even stopping to look down the sights of his weapon.  Lessons learned from this experience would have a significant effect on Seecamp’s future gunmaking philosophy.

After the war concluded, Seecamp moved his family to the United States via Canada and eventually wound up as a gun designer for O.F. Mossberg, where he would work from 1959 till 1971. Upon retiring from Mossberg, Seecamp patented a double-action conversion for his Colt .45 1911 pistol and established L.W. Seecamp Co. in 1973 in support of this service. 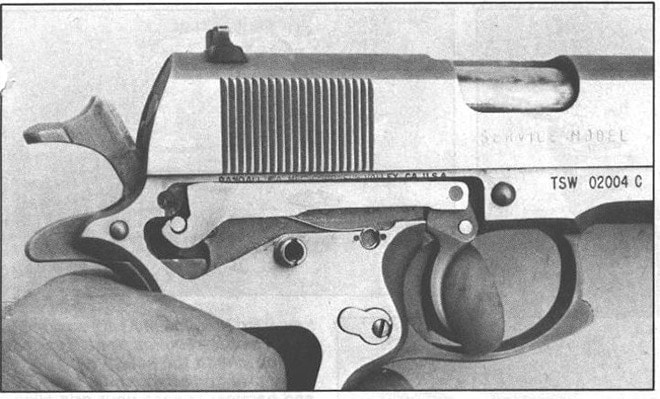 His experience during the war had impressed upon him the value of point shooting and DA firearms and he was convinced that in a real close quarters combat situation, one would not have time to aim down the sights and flip off a safety. To his thinking, it would simply be quicker and more effective to draw and shoot. (Regardless of one’s feelings on Seecamp’s service in World War Two, there is no denying the man had experience on the subject of gunfighting.)

The results were some of the first commercially available double action Colt .45 semiautomatics to be found anywhere in the world, with the company producing over 2000 conversions throughout the 70s and 80s.

By the end of the 70s, manufacturers like Browning, and later Sig, had introduced their own quality double action 45s to the market and Seecamp looked elsewhere for a niche to fill.  They found it in a small caliber DA-only concept, the LWS .25.  This stainless steel, hammer fired, .25 ACP caliber semi-automatic pistol is descended from the Czech CZ97/CZ45’s double action only design (variously termed “trigger cocking only”). It was introduced in 1981 with total production ending at around 5000 units. 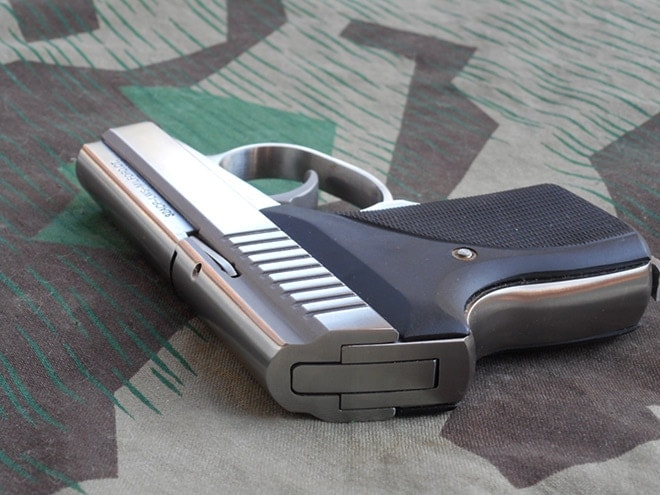 Operation of the action on these Seecamp pistols is through chamber-ring delayed blowback. When a cartridge is fired, the case expands into a recessed ring that seals the sides of the chamber.

This seal prevents high-pressure gas from escaping into the action of the gun and delays opening the breech until the bullet has left the barrel.  A raised portion at the rear of the chamber, which is smaller in diameter than the front of the chamber, slows the rearward moving slide by constricting the expanded portion of the case as it is extracted. 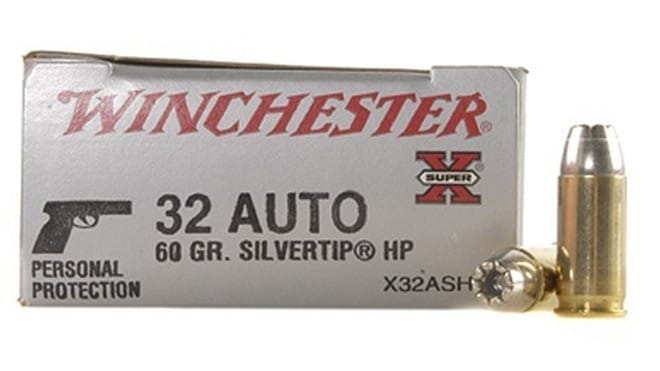 The LWS .32 was designed around Winchester Silvertip hollow point .32 ACP.

In 1985, Seecamp discontinued the .25 ACP model and rechambered the caliber to the nearly forgotten .32 ACP with the LWS .32, sometimes written LWS-32.  Designed with identical dimensions to the earlier .25 caliber model and around the only hollow point .32 ACP commercially available at the time, Winchester Silvertips, the LWS .32 would become Seecamp’s most popular handgun.  During the height of its run, a factory LWS .32 commanded prices of $1000 a unit and was sold out years in advance. 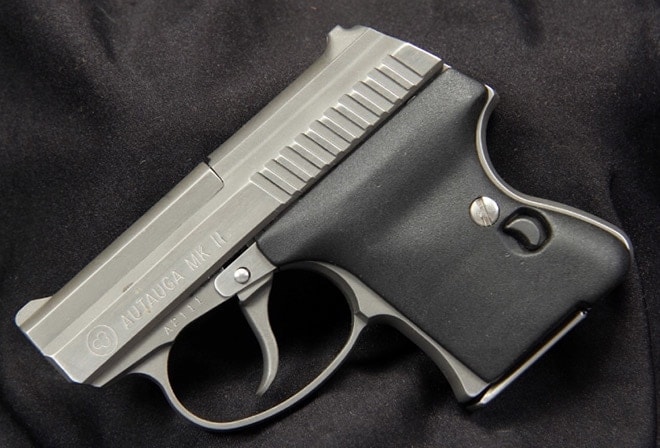 Today a number of carry guns, including some near LWS .32 clones, have challenged Seecamps dominance of the .32 ACP carry gun market.  These include offerings from North American Arms, who introduced the Guardian pistol in .32 ACP in 1997 in an attempt to compete with the smaller Seecamp, and Kel-Tec in the form of their larger but lighter P32 and P3AT polymer-framed pistols. Autauga Arms also produced a near clone of the LWS-32, though Seecamp LWS-32 sales seem unaffected despite alternatives.

The first thing to notice is that the LWS .32 is downright tiny. Not compact or subcompact — tiny.  Possibly the smallest .32 ACP on the market. Barrel length is 2.06 inches. The grip is so short that I’m only able to get my index and middle fingers around it. The gun is made, however, entirely of polished stainless steel. This gives the LWS .32 more heft than you may imagine for such a small handgun, weighing in at 11.5 ounces empty. 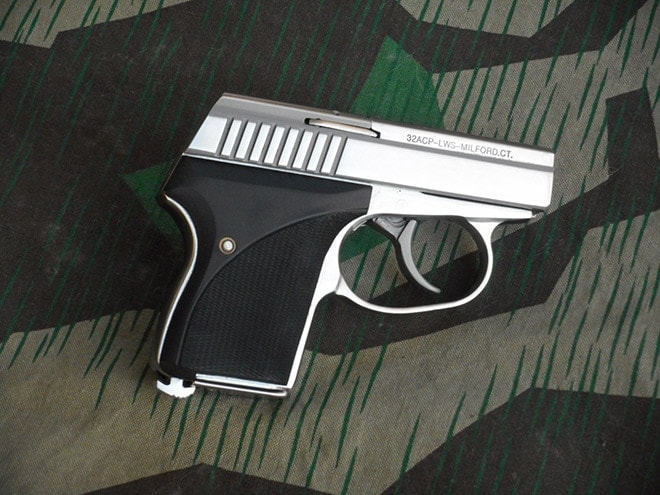 The logic in making the LWS .32 one hundred percent stainless is clear to me. Even in .32 ACP, a pistol this tiny would be a snappy shooter and the extra heft provides a bit of recoil mitigation. Managed recoil means better control.

There is also no mistaking that the LWS .32’s construction is of very high quality as the workmanship is superb. The lines are graceful and racking the slide is smooth like glass. The stainless finish shows no discoloration or machining marks.  Grips are glass-filled nylon and well checkered. 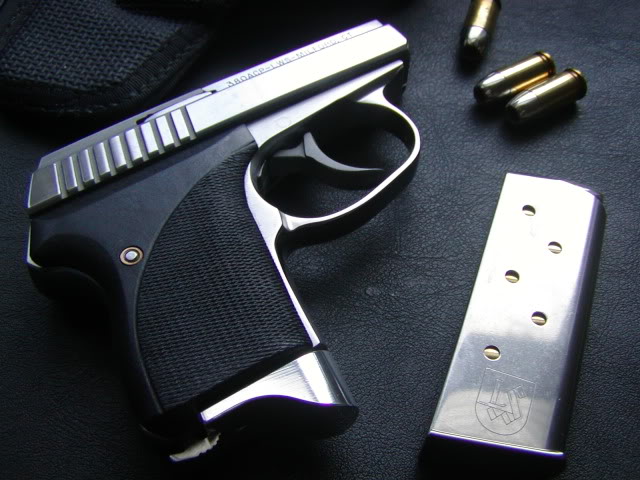 The Seecamp’s .32 ACP caliber magazines hold six rounds  The heel magazine release shows off the gun’s European roots. Yes, it’s annoying to many shooters, but with a lot of practice, releasing the magazine in such a manner eventually becomes muscle memory. 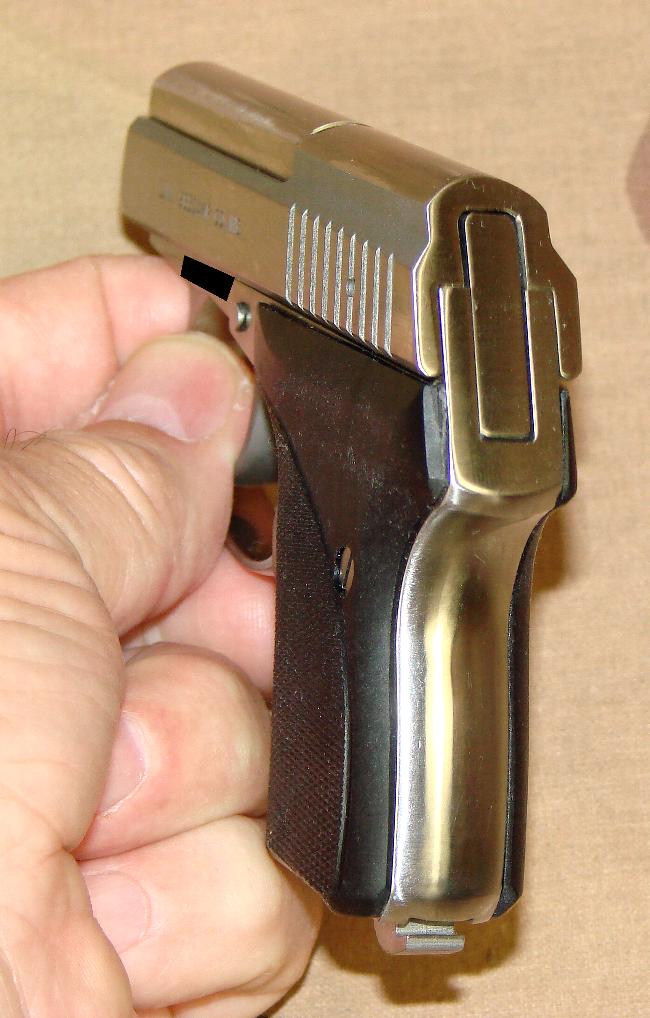 Note the lack of any sights on the LWS-32. (Photo: Katsko.net)

But the most noteworthy part of this pistol is the total lack of sights, a feature, or lack thereof, that even caused some raised eyebrows when this gun was first introduced in the early 1980s. Manuals for the LWS .25 and .32 came with sections devoted to acknowledging self defense as a legitimate reason for firearms ownership, a novel concept for a gunmaker at the time that further emphasized the gun’s role as a defensive firearm rather than as a “target” pistol.

No trench, three-dot, or standard sights. Just nothing. Not even the miniscule iron sights seen on classic pocket guns from days of yore. There is nothing there and no provisions for mounting anything. However that is the point, since this gun was made for one thing: point-shooting.

Point-shooting is something of a lost art these days, but the LWS .32 was designed specifically for it. It’s reckoned that you’ll be using the LWS .32 at very close distances where it’s unquestionably quicker to point and shoot rather than aim down the sights. Yes, this runs counter to everything we are taught these days about defensive pistol technique, but at the bad breath distances this gun is intended for it is quicker and perhaps wiser to just draw and shoot.

LWS-32 compared to Walther P38, the pocket pistol that got the ball rolling for Seecamp. (Photo: Francis Borek)

When fired the LWS .32 handles surprisingly well and I can put rounds where I want by simply using the top of the barrel to aim.  As mentioned previously, the LWS .32 was designed around the only .32 ACP hollow point ammunition available to Seecamp in 1985. As such, the gun may have issues feeding some brands of .32 ACP.  Any ammunition with an overall length exceeding 0.910 inches may not feed or chamber correctly and the company explicitly advises users that the LWS .32 was made for defense ammunition only in product literature. Seecamp has even compiled a list of defensive ammunition that reliably cycles in the LWS .32 here. 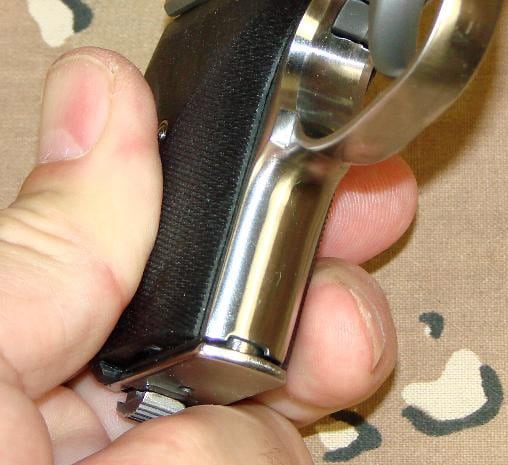 This is all to say that the LWS .32 is not a range gun. It was built solely for self defense and when loaded with proper self defense ammunition — Winchester Silvertips are always a good bet in a Seecamp .32— the gun has a reputation for extreme reliability. But while it’s nice that a firearm manufacturer maximized their gun’s reliability by tailoring it to certain ammunition, it also makes practice a very expensive possibility (try about $40 for 50 rounds, when you can find them in stock). This issue is compounded by the necessity to practice point shooting repeatedly and often in order to acquire this skill. 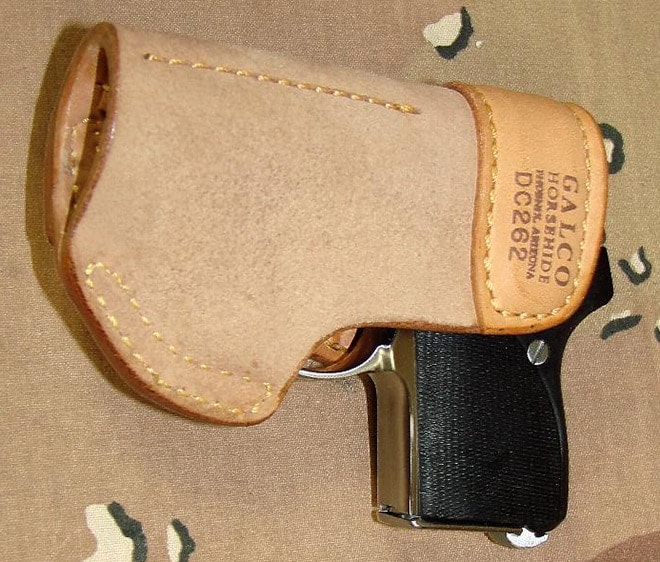 LWS-32 in Galco holster. Holster is a must for pocket carry. (Photo: Katsko.net)

My solution to this is to buy an inexpensive, small .22 pistol and use this to practice point shooting. The Beretta Model 71, which I have previously written about, would be an excellent candidate. The Taurus PT-22 would fit this job as well as it is quite small and double-action only like the LWS-32. Such a pistol would be the best accessory for a LWS-32 after a spare mag or two, and a good holster.

The LWS .32 can be bought new, with an MSRP of $565.  Used examples often start for around one hundred dollars less. 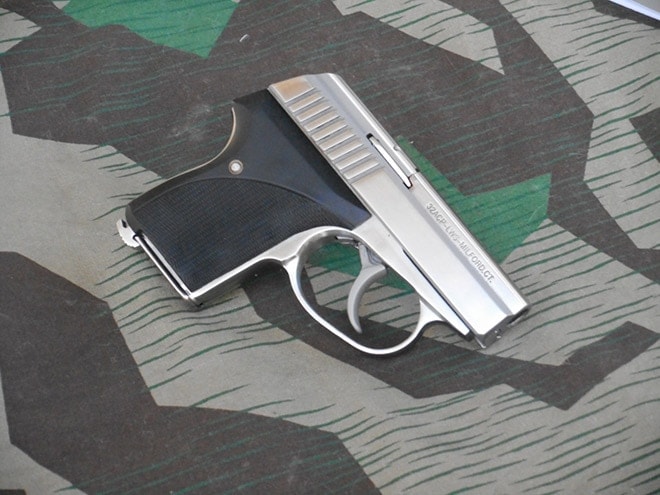 The LWS-32 is a throwback to when men wore suits all day, every day and the term “vest pocket pistol” was in common use among gun owners. Indeed, like many of those old pistols, the LWS-32 is built in the tradition of meeting the highest quality standards and it could be quite the accessory for any well-dressed gentleman.

While 6+1 rounds of .32 ACP doesn’t sound like much at all to modern shooters, it’s still a gun and a reliable one at that. As mentioned above, Seecamp also produces a variant in .380 ACP if you find a larger caliber more reassuring.  I would not consider either to be a primary carry choice but I do consider the LWS .32 to be effective, reliable back up gun.