Walk into any gun store and you will find revolvers. Single action 22 rimfires, chunky Ruger double actions, Taurus Judges, and perhaps even older Colt or Smith & Wesson police trade-ins with varying degrees of wear and tear. But despite the number of revolvers out there today for both sport and personal defense, the J-frame Smith & Wesson .38 Special is still arguably the gold standard and a hot item to be found at many a big box store and mom-and-pop shop.

Smith & Wesson’s small framed revolvers are by far their most popular and have been going strong nearly seventy years starting with the introduction of the Chief’s Special back in 1950. This traditional five-shot 38 Special revolver with an exposed hammer was immensely popular and spawned several variants including the aluminum framed Model 37. It retained the traditional lines of the Model 36, but was lighter in weight. Today, the Model 37 is no longer in production, but its stainless-steel son, the Model 637, is still alive and kicking.

It was quite a treat when I happened a while back upon a Model 637 surrounded by its concealed hammer cousins, the 442 and 642. I could not get over the lack of a hammer spur on those guns, despite the fact that concealed hammer 38s are nothing new and that an exposed hammer to fire the gun in single action mode is of dubious merit today. 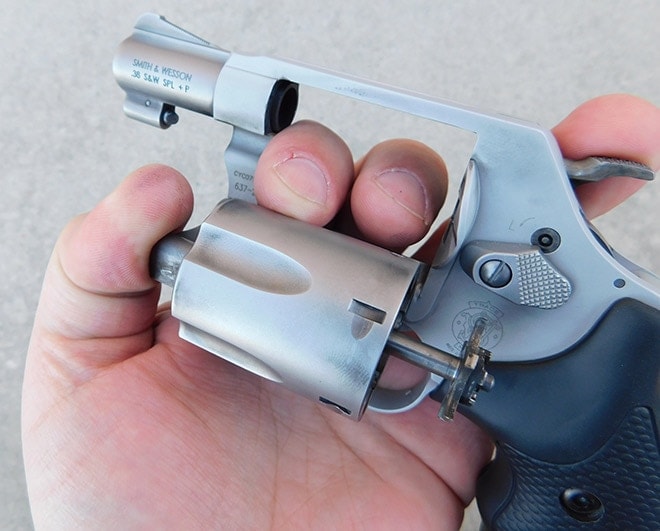 Like most snub-nosed revolvers, the M637 has short ejector rod. Give it a firm smack to clear stubborn cases from the chambers. (Photo: Terril Herbert)

Like the old Model 37, the Model 637 has aluminum frame, but the cylinder, crane and barrel are all made of stainless steel. The 637 also bears some of the uglier, new Smith & Wesson features like the keylock above the cylinder release and the lack of a hammer-mounted firing pin. But operationally, the gun boasts the same lines and function of the original without the fear of losing something that is now collectable.

The gun, fully loaded, weighs 15.5 ounces and sports a 1.875 inch barrel. As mentioned before, the pistol has a hammer spur that allows the gun to be fired in single-action with a light trigger pull or it can be fired in double-action by simply pulling the trigger.  The 637 has a rubber grip that wraps around the front of the grip-frame. I find this lacks some of the classic grittiness of the original walnut grips that came on the M37, but I was sure it would be of benefit, as the 637 is rated for +P ammunition.

The Model 637 can be had for under $400. Despite what some might say are shortcuts in manufacturing, when I laid down the cash for my 637, I knew it was money well spent. But then the trigger finger started itching.

The Model 637 and the small framed Smith & Wesson revolvers are thought of as a gun with one purpose and one purpose only—concealed carry. These guns are lightweight and their curved appearance naturally blends with the natural curves of the body, yet they pack a real punch and boast a reliability that still endear many people to these little guns (even though small automatics have come a long way since 1950). 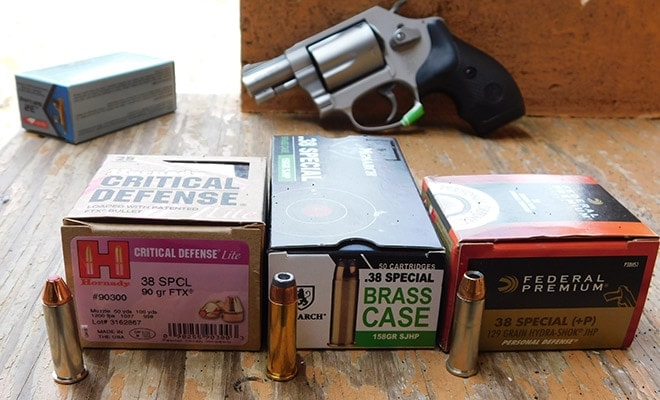 Part of the ammunition used. The fixed sights on the M637 seem to prefer 158 grain ammunition. The Hornady Lite and Monarch PPU ammunition produced recoil that was not unpleasant. (Photo: Terril Herbert)

Revolvers are either considered an expert’s gun or a beginner’s gun, depending on who you ask. As for me, I don’t care. I assembled my usual three-hundred rounds of ammunition and set out for the range. So how did the 637 hold up to fire? So-so. Comme ci, comme ça.

The ammunition used in the tests include:

Like any other J-frame or its clones, the 637 is loaded by pushing forward on the cylinder release and pushing the cylinder out to expose the chambers. You can now load individual cartridges or drop them all in at once with a speed loader. Close the cylinder and you are ready to fire. Unloading is just as straightforward by opening the gun and giving a firm smack of the ejector rod to throw the cases from the chambers.

The 637 did well at the start with the 130 grain FMJ ammunition. This ammunition is rather mild in power so recoil was quite manageable, though snappier than using the same ammunition in a full-sized revolver. The accuracy was acceptable at seven yards as I was getting used to the double action trigger pull, which broke in at just over nine pounds. The single action trigger pull, with the hammer pre-cocked breaks at just under two pounds. Most shooting was done in double action, however.

I later used the Hornady Lite ammunition and the proven Federal Hydroshock +P ammunition. The accuracy was acceptable in double action, but these rounds shot quite low in my gun. However, the 158 grain rounds hit to the point of aim. The sights on the 637 are crude and consist of a standard milled notch in the rear and a serrated front blade so there is little that can be done about it. However, for self- defense work the point of aim between these loads would make little difference. But what would make a difference is recoil—and therefore—shoot-ability. 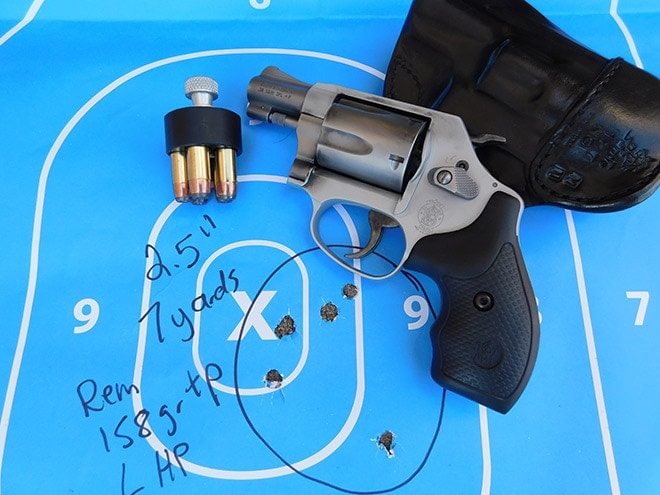 Don’t be surprised if the web of your hand stings after a few shots of the +P ammunition. The grip of the 637 is hand-filling, except your pinky will be likely to hang off the bottom. The gun feels great in the hand but the aluminum back strap is exposed and it comes straight back into the hand when firing.  This isn’t a bother with standard pressure loads as recoil is milder, but the higher pressure +P loads come out with authority on both ends. That sort of recoil would induce bad habits like flinching. That results in wild shots, which isn’t good when you are limited to five shots. The reload isn’t excellent either.

The gun, like most snub-nosed revolvers, have a shorter ejector rod. The cases won’t clear the chambers with a full-stroke of the rod, but will be started out. However, a sharp smack of the rod with the pistol’s muzzle skyward meant 100 percent reliability of extraction for me.

The grip, despite being generously recessed isn’t conducive to same-handed reloads either using HKS speed loaders. I usually do not grip the revolver in my left hand to unload and reload the pistol, but it was necessary to reload the pistol with any speed.  The speed loader sometimes needed a shake to drop the rounds in. In short, you won’t be reloading the 637 under stress.

Having said that, the 637 performed very well at the range with no hiccups in ejection or firing. In short, reliability was 100 percent. Despite the lack of good sights, and a long, yet smooth double action trigger pull, I got to coax some good accuracy out of the gun, though all firing was clearly good enough for social work.

At seven yards, I managed about 2.5 inches firing in double action. The single action trigger pull is incredibly light with no take up before the break and the group tightened a lot more, even without special target ammunition. For a small revolver, this is great accuracy. With concentration and more rapid fire, hitting the center mass of a silhouette target became easy. At fifteen yards, things got a bit harder and cocking the hammer would be preferable beyond that, but the hits kept on coming and I left the range pleased, albeit with a sore palm.

Coming away with quite a bit of range time with the 637, it was easy to see this gun for what it is: a small utilitarian revolver. There was no hokeyness going on at the range — only firing, unloading, and firing again — and I left knowing that Smith & Wesson is still building a quality handgun in the 637. 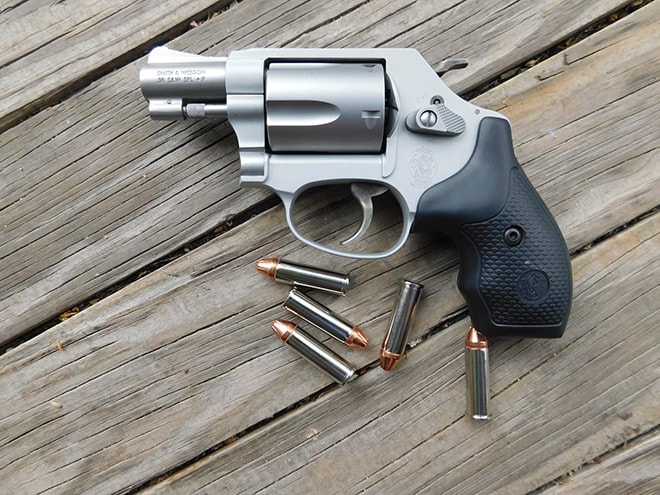 What I also found conclusive about my shooting sessions with the 637 is just how challenging small revolvers are to shoot. Certainly, the accuracy was acceptable, but trigger control is vital when using a double action revolver versus a striker fired pistol owing to the long trigger pull. Also, worth mentioning is the sharp recoil the gun generates with +P ammunition.

Despite that the 637, and J-frame revolvers in general, are harder to shoot well, I feel this gun is a good buy. It has the Smith & Wesson build quality that shooters have come to expect for years and lives up to its reputation for absolute reliability. You will be unlikely to encounter problems with the 637 right out of the box which should give you the flexibility to learn to adapt to fast firing with the double action trigger — which is quite good for its class when pitted against guns like the Taurus Model 85 and Charter Arms Undercover.

There is a lot of debate going on about the merits of even having a revolver with an exposed hammer. That is a debate for another day, though personally I prefer an exposed hammer to be able to press the gun into service in other facets of life like teaching a newer shooter or pest control. Though the hammer may or may not snag on the draw in a self-defense situation, I like to have options. It is easy to disqualify the 637 as a pocket gun but it carries on the belt very nicely, if not forgettably. What I can say with certainty is that the 637 is a solid entry in the small revolver market and a new favorite of mine.