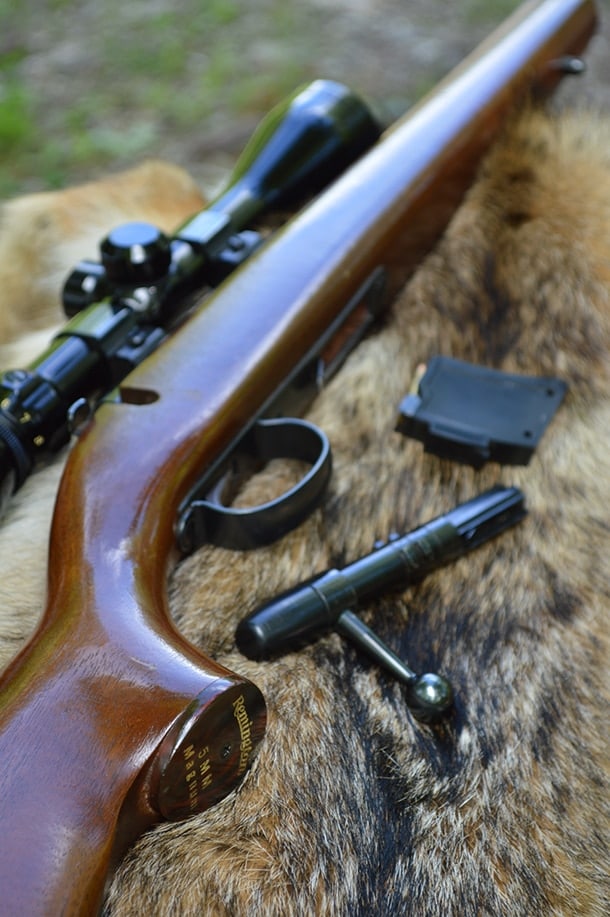 When you hear the word “rimfire,” if all that comes to mind is the .22, then you’re missing out.  Sure, we adore all sorts of .22’s—the shorts, longs, WMRs—and the speed of 17’s.  Yet we musn’t forget one of the top performers in the rimfire class—the 5mm Remington Rimfire Magnum.  Though seldom mentioned and once nearly obsolete, could it be on the verge of a relaunch in the rising rimfire revolution?

I recently had the pleasure of spending a day on the range with a 5mm RFM.  And let me say, varmints beware.

The 5mm Remington Rimfire Magnum cartridge was introduced in 1969 by the Remington Arms Company, which chambered two bolt action rifles for its use.  Remington Models 591 and 592 hit the open market in 1970 with a plan to challenge the success of Winchester’s .22 WMR.

The original 5mm bottlenecked cartridge held a 38 grain Power-Lokt HP bullet with an advertised muzzle velocity of 2100 fps, though chronos have booked it significantly faster.  At its prime, the round was blazing fast, and trumped the WMR’s 40 grain bullet at 1910fps in both power and accuracy. 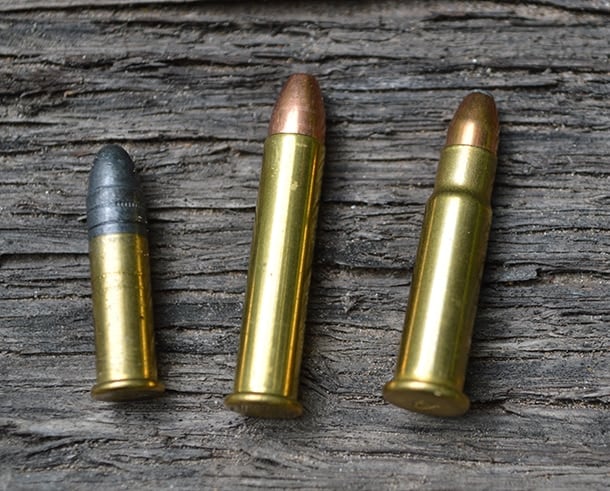 The 5mm bullet diameter is actually the same as the .204 Ruger centerfire round, and can hold its own ballistically with both the .22 Hornet and .218 Bee centerfire rounds—quite a feat for a rimfire.  Naturally with its ballistics, it remains ideal for varmint and small game hunting.  Though prices of ammo limit potential—a fact true of all rimfires lately—the 5mm is a pleasing target plinking round as well.

Despite Remington’s efforts to launch the round into popularity, the early 70’s market never fully embraced the 5mm, and the guns were discontinued in 1973 with a production count around 60,000.  With the guns went the ammo production, and many of these original rifles languished in closets and gun cabinets for decades.  But now, they are back.

Because some folks fell absolutely in love with their 5mms, demand for the ammo never completely fell off—though supply surely did.  In 2008, the Mexican-based Aguila Ammunition commenced 5mm ammunition production, and they continue stocking it today. 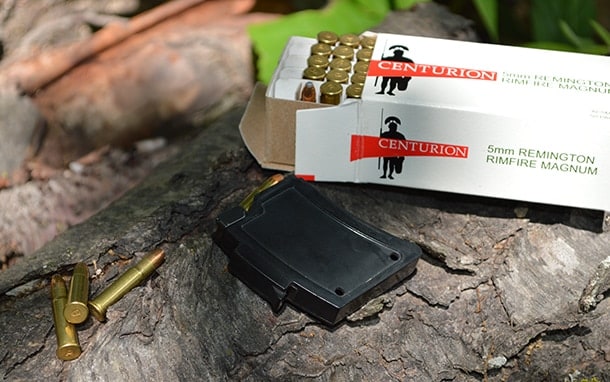 Aguila ammo is imported by and sold under the Texas-based Centurion Ordnance name.   The company is currently producing two 5mm loads, both brass-cased and Eley primed. The first is a 30-grain magnum hollowpoint with an advertised 2300fps muzzle velocity.  The other is marketed as the Magnum Varmint, with jacketed hollow point bullets and a slightly higher chronographed muzzle velocity of 2400fps. The Aguila ammo boasts 325 ft/lbs of muzzle energy.  Boxes of 50 rounds retail around $15-20.  Sportsmans Guide, Ammunition to Go, and Cheaper Than Dirt have it in stock, while Midway USA and Brownells are still filling backorders. Surprisingly, I didn’t have any problem finding it at my favorite gun shop.

Remington had success with their 38-grain hollow points during the initial production run, though what little of that remaining ammo commands a premium.  Original white boxes of 50 fetch prices in upwards of $75, with later green boxes selling around $50.  During the years of 5mm ammunition shortage between Remington’s discontinuation and Aguila’s re-production, a 5mm Craig centerfire conversion was introduced, though the majority of rifles survived conversion. 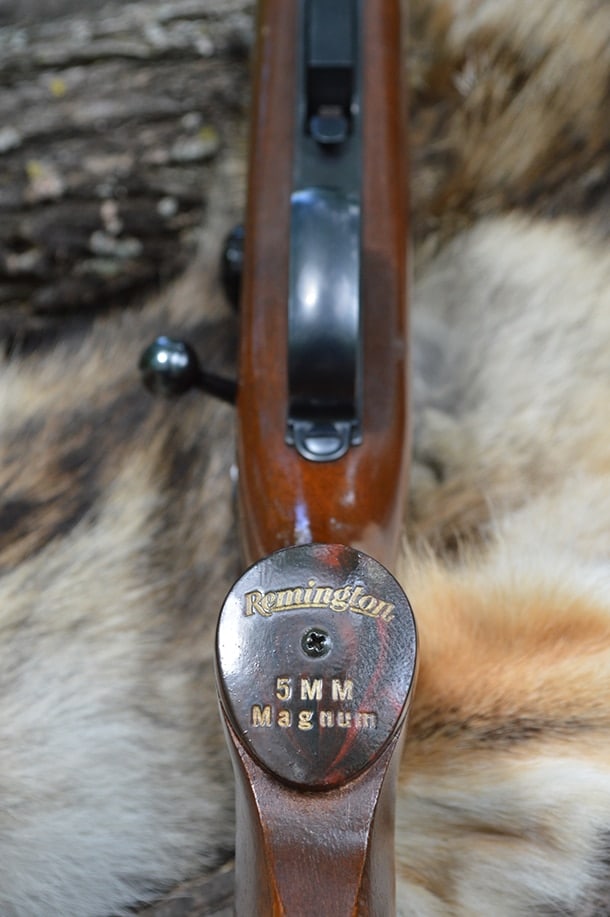 So there’s 5mm ammo on the shelves, but what about the guns?  The duo of Remington’s are not altogether uncommon on the used market.  The Remington 591 has a 24” barrel, 1 in 12” twist, and carries a 4-round plastic magazine.  Sans scope and ammo, the 591 weighs in around 4.75 pounds.  The Remington 592 is almost identical, save for the 10-round tubular magazine.  The bolts have six rear-locking lugs and a two-stage extractor. Though the rifles came with iron sights, most of the ones I see these days carry nice scopes.

While they wear merely average-grade walnut, what the Remingtons lack in remarkable looks is recovered many times over in performance.  They are smooth shooters, though the trigger breaks a bit on the heavy side at around 6lbs and is not adjustable.  These bolt guns have been selling used, in good condition in the $500-700 range, though deals still exist.

A good friend allowed me to borrow his Remington 591, a sweet little rifle born in 1970 and showing little use over the years.  I especially love the easily recognizable 5mm grip cap announcing the gun’s chambering in “5MM Rimfire Magnum.” The 591 is balanced, smooth, accurate as you could want at 100 yards (easily inside a quarter), and could be pushed out past 150 yards with no problem whatsoever. 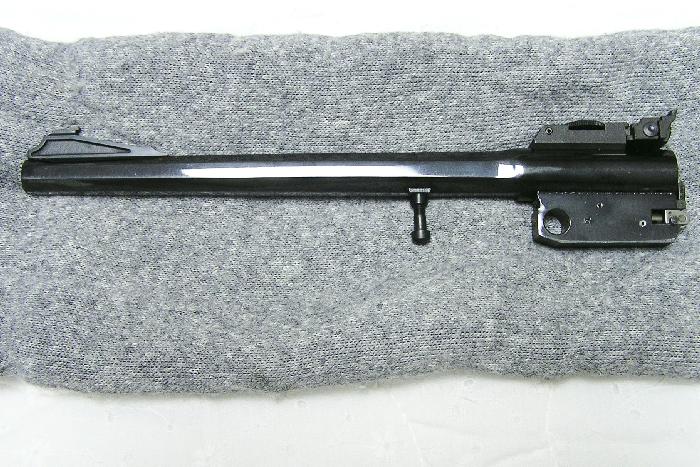 The 5mm RFM is just plain fun to shoot, and during the recent ammo crisis, I’ve seen boxes of 5mm Centurion sitting alone on the shelves at three different gun shops.  Recoil is essentially non-existent, as is to be expected, and firing noise is no greater than the .22 rimfires.  On yard vermin, the Centurion hollow points were absolutely devastating.  I would be interested to see how other bullet designs and weights would expand the capabilities of this already deadly rimfire.  To see how a 5mm handles rabbits and squirrels afield, check out 5mmforums. The hardcore 5mm shooters over there report terrific and clean ground squirrel, rabbit, and varmint kills at ranges out to 200 yards.

In spite of all the 5mm’s praises, few gun manufacturers have joined the fray.  However, Thompson Center previously produced several arms chambered for the 5mm round, with the most popular being 10” octagon barrels for the Contender pistol line. It seems a number of 23” carbine-length barrels also found their way to the field.  Though unofficial production numbers list somewhere close to 30,000 TC barrels, very few are seen on the used market.  I somehow hope this speaks to a still fervent following of the 5mm.

At the 2008 SHOT show, Taurus nearly sparked the 5mm RFM revolution when it announced a 5mm chambering in its successful Tracker pistol series, concurrent with Aguila’s announcement of the ammo production.  The new Taurus wheel gun was postponed several times over the following years, citing lack of orders.  Though the Taurus 590 Tracker in 5mm is listed on Taurus.com as “no longer in current production,” it appears none were ever produced for the mass market.   The matte stainless gun pictured, however, is pretty classy looking, and with its 9-round cylinder and 6.5” ported barrel ready to accept scope rings, would doubtless make a great little small game handgun.

Retail was listed at $514.  I have no doubt that if the 590 Tracker were re-introduced these days with a little promotion of the round and availability of ammo, this gun could be a winner—and a darn good hunter.

For one, I find hunting and shooting with nostalgic firearms to be a special pleasure.  It’s like being let in on a well-kept secret, and as the shots rang out on our day on the range, the 5mm Rimfire Magnum sure put a smile on this shooter’s face.  Though Remington was simply ahead of its time in introducing the 5mm Rimfire Mag, I think the world has proven that it’s ready for sub-.22 bullets that can boogey.  So here’s to the day we see more guns sending 5mm rounds downrange.