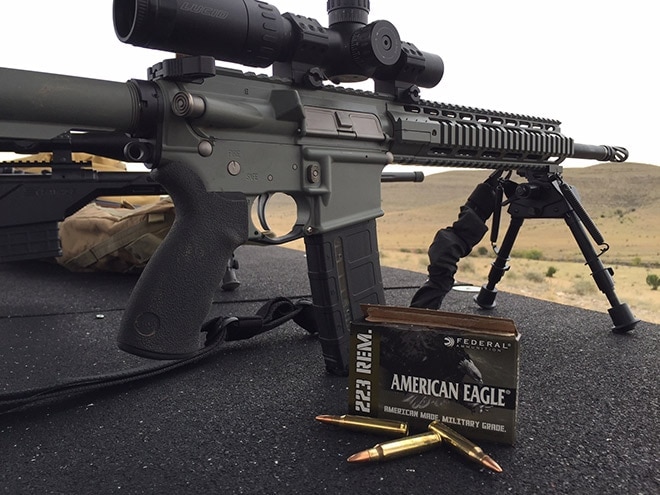 “You get what you pay for” is an adage often heard among experienced gun folk. But plenty of bargains come around too, and I stumbled upon one not long ago.

American Eagle (AE), a Federal Premium ammunition product, is already known as a reliable, budget-friendly brand. But getting high performance out of it was a very pleasant surprise.

I picked up a few boxes of AE 55 grain, full metal jacket in .223 at a visit to Walmart. At $6.84 per 20-round box — a little less than 35 cents per round before tax — it was a pretty good deal for practice ammo. The new packaging, an olive drab box with the familiar eagle motif, had me curious about whether the product had changed along with the presentation. 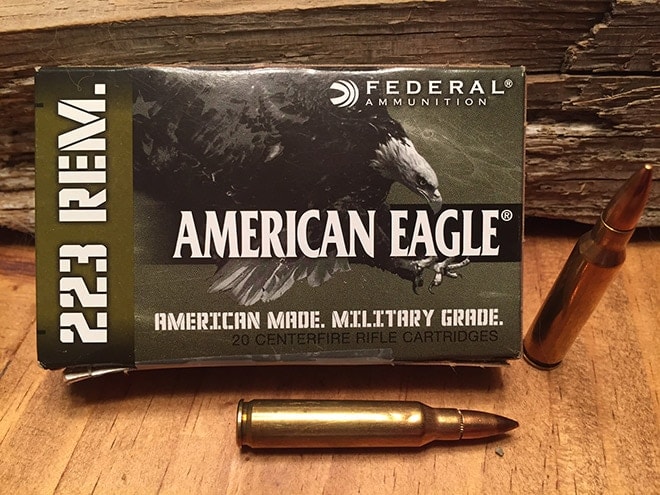 My Cutlass AR15, by Battle Rifle Company, was thrown into the truck as an afterthought on a cold October morning.  We were headed to beautiful Felix Canyon Ranch in New Mexico’s Billy the Kid country, which has an extensive known distance range.  The goal that day was to spend time behind a dedicated long-range rifle. Fortunately, there was time to pull out the AR, fitted with the TacShield bipod for stability.

Loaded up with AE out of the olive drab box, I took aim at the 200-yard, IPSC-style plate. It rang all too easily. Not being one to waste ammo on easy targets, I turned my focus to the 300-yard target.

The wind was quartering eastward at around 14 mph. Though there was a Kestrel weather station at hand, my freezing legs, stupidly clad in short socks, told me all I needed to know about local conditions. It took a couple dirt-kicking tries to establish a windage hold at that distance. But soon 300 yards was more or less boring too. 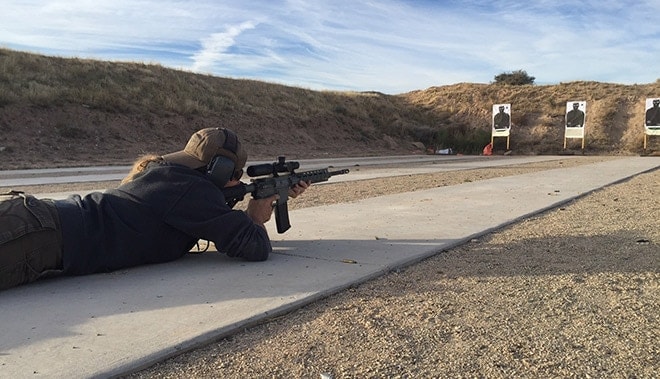 At 525 yards, someone’s idea of a good time was to hang a ten-inch round plate. Feeling more confident than I perhaps should’ve, I consulted the Strelok ballistic app for a holdover recommendation. While it provided a workable elevation adjustment, the wind played havoc with my plans for a while. Seven rounds danced in the vicinity of the small target. My momentary pride-in-accuracy bubble was about to burst.

Some combination of good equipment, good ammunition, and the feeling of things being right somehow settled in as the eighth round headed downrange.  Surprisingly, even though the wind continued, my little streak of hits continued for several more rounds.  It was time to quit on a high note and declare the day a success.

Though no small credit goes to a quality rifle and the dependable Lucid L7 scope, ammunition does make a difference.  I was pleasantly surprised to achieve some moments of excellence, .223-style, with a non-match grade, budget round. 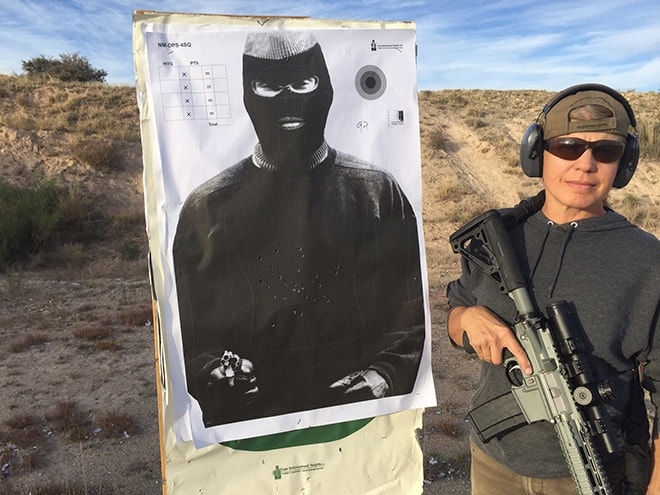 The ammo fed perfectly to achieve a 97 on a timed qualification — the missed head shot was on me. (Photo: Team HB)

Back home, I contacted the ever-helpful Federal ammunition representative, wanting to know if something had changed in the 55 grain FMJ product to make it such a good performer.  The answer is kind of amusing as well as satisfying: only the color of the box has been changed.  Different distributors now have differently colored boxes, a variation from the old white-on-black design.  Walmart’s color is olive drab.

Besides being a good choice for accuracy, AE ammunition has never, in hundreds of rounds fired through this and another AR, offered a bit of trouble in the feeding department. So I didn’t hesitate to use it in the same rifle during a 30-round law enforcement qualification test, with distances from 75 to 15 yards. As expected by now, the ammo performed well, helping me earn a 97 percent. Dependability of the gun and everything used with it is key to successful duty or recreational shooting. American Eagle’s .223 FMJ, in my opinion, does its part in the dependability equation.

In a pursuit where it’s all too easy to feel like one needs to keep buying the next upgrade in order to gain an edge, it’s nice to know Federal’s American Eagle FMJ delivers high-grade performance at an affordable price.